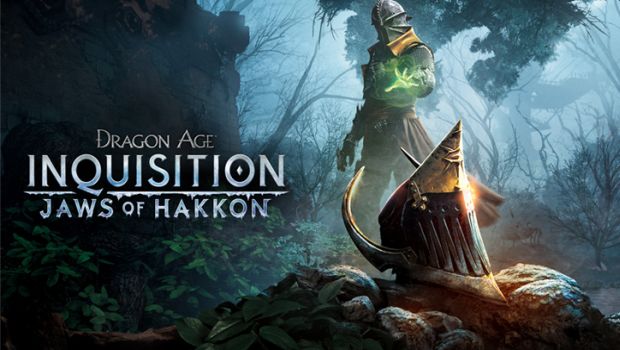 First let’s address the elephant in the room — the Jaws of Hakkon dropped into our lap out of nowhere, with the announcement hitting at the same times as the code.  My review for Dragon Age: Inquisition was on the Xbox One, but my completionist playthrough was on the PlayStation 4.  With that said, the party state of my Xbox One crew was a minimalist one, with only enough done to complete the game.  My review for this downloadable content will be from that perspective and at that party level.

Before I dig into what Jaws of Hakkon is and is not, I want to put a little bit of context behind where it takes place.  At any point in the game after you reach the war table you’ll be able to access a side area called the Frostback Basin.  This colorful and beautifully dangerous forest area does have a minimum area recommendation of Level 20, though.  This means it’s likely what you might refer to as ‘end game content’.  The area is relatively large (roughly the size of the Western Approach), and unlike some of the larger play spaces, it is filled to the brim with things to do.  Six camps, 12 shards, a small island, and a large hold full of fetch-esque quests round out the “side” content of the area, but simply categorizing it that way doesn’t exactly encapsulate this DLC properly.

If you think back to the pre-launch interview I did with Mark Darrah, one of the challenges he outlined is that the storyline has to be written so the player can engage the various elements in any order they wish.  This has a genericizing effect on the narrative, though the master story crafters at Bioware have hidden it carefully.   Adding story-adjacent DLC that doesn’t disrupt the primary narrative means that it will always feel like a sidecar attachment.  That said, the Level 20 suggestion places the content squarely around the game’s soft level cap, making this adventure more end-game than one might expect.  People like myself that have flipped over every rock in Thedas will settle in easily.

The most immediate thing you’ll notice in The Jaws of Hakkon is that this has to be the most gorgeous area Bioware has designed for Inquisition yet.  God-rays aplenty stream through the trees.  Red mushrooms lay against flowing rivers with widely spaced banks.  Tree-mounted spiral stairs give way to proper camps once captured.  As you discover the depths of the basin, mist-covered undergrowth hides danger at every turn.  Make no mistake — the Frostback Basin is the most dangerous area you will encounter.

Aside from the setting, the storyline is fairly straightforward.  Mentioned briefly in the title proper, there have been Inquisitors in the past.  One such Inquisitor, your predecessor in fact, has lain dead for over 800 years.  When a historian discovers the resting place (you guessed it, in this basin), Scout Harding does her usual digging and finds that she arrived at the edge of a long-standing feud between the Avvar of Stone-Bear Hold and the Jaws of Hakkon.  Without giving more away, suffice it to say that nefarious objectives are afoot and it’s up to you and your team to make with the thwarting.

Overall and as expected, the storyline is well written if disconnected from the main thread.  The minimalist run against the main boss in the game proper will leave you near the appropriate level to tackle the added content, and the soft cap should even keep completionists on their feet against the more dangerous foes that are so tightly packed into this space.  That said, the combat is surprisingly the low point of the whole package.

For the roughly 8 hours of gameplay on offer here you’ll run into the same foes over and over.  Spiders stalk your path, a trio of wizard/archer/rogue foes are often flanked by a Hakkonite with an oversized hammer and an inordinate amount of health and armor, and plenty of Gurgut and Bogfishers dot the landscape.  You’ll murder them by the score, which is likely a vehicle to help raise player levels, but it does fall to tedium rather quickly.

There is a new mechanic introduced into the game — a special upgradable shield called Aegis of the Rift that the Inquisitor can use to stop incoming projectiles.  This comes in handy against the endless parade of archers in this area, and when upgraded becomes downright mean, dealing 5 damage per character level against your foes.

The biggest surprise here, given that this package dropped into our lap unannounced, was the number of bugs I encountered.  I found one person sitting/levitating, plenty of clipping, and at one point Cassandra became the walking dead.  She was following my party with her shield up, ready for a fight, but the UI clearly showed her as dead and unselectable.  Only a reload cleared this condition.  For something that appeared on its own schedule, I would have expected a cleaner execution.

While Jaws of Hakkon is neither revolutionary or ultimately necessary, it is gorgeous and offers 6-8 hours of gameplay for the price of a solo trip to the movies. The new end-game content fits nicely into the fold, even if it offers very little deviation from the well-established formula.

Ron Burke is the Editor in Chief for Gaming Trend. Currently living in Fort Worth, Texas, Ron is an old-school gamer who enjoys CRPGs, action/adventure, platformers, music games, and has recently gotten into tabletop gaming. Ron is also a fourth degree black belt, with a Master's rank in Matsumura Seito Shōrin-ryū, Moo Duk Kwan Tang Soo Do, Universal Tang Soo Do Alliance, and International Tang Soo Do Federation. He also holds ranks in several other styles in his search to be a well-rounded fighter. Ron has been married to Gaming Trend Editor, Laura Burke, for 21 years. They have three dogs - Pazuzu (Irish Terrier), Atë, and Calliope (both Australian Kelpie/Pit Bull mixes).
Related Articles: Dragon Age: Inquisition Jaws of Hakkon
Share
Tweet
Share
Submit