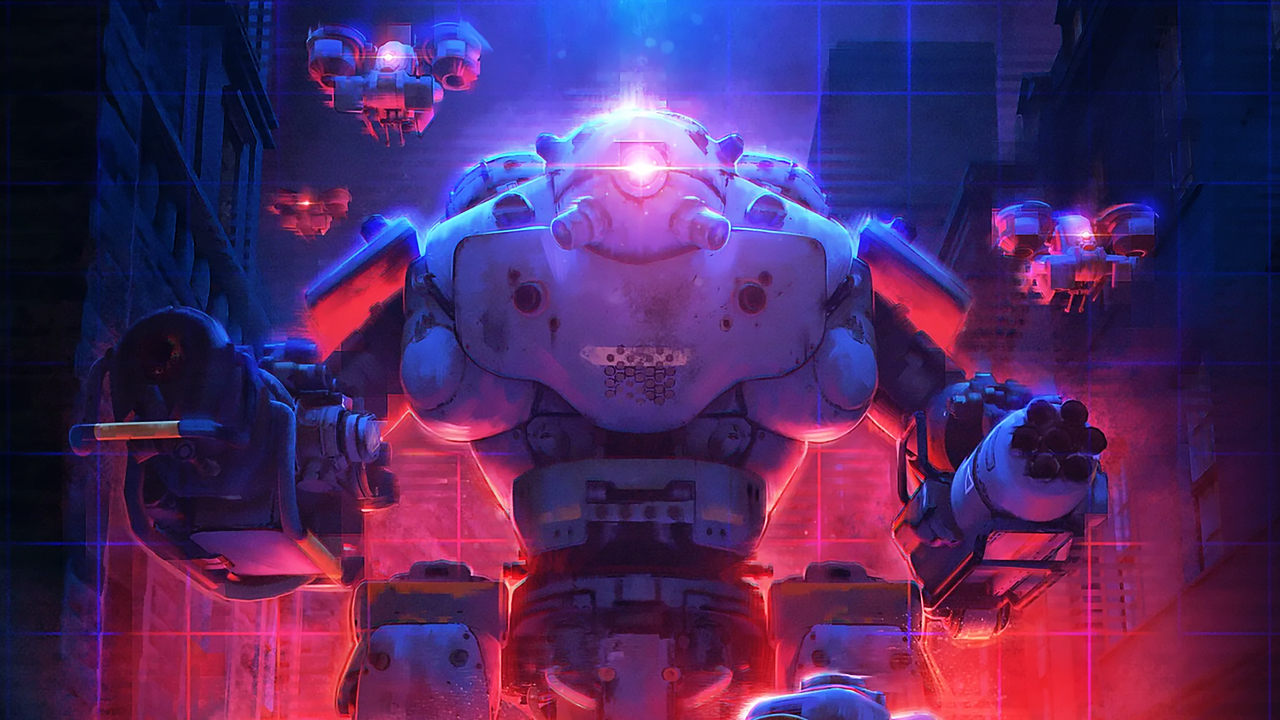 I absolutely love the MachineGames Wolfenstein titles. They have remarkably tight storylines full of compelling characters and stories. The thought of experiencing the frenetic Nazi-killing universe they’ve created in virtual reality is exciting. I’ve got a 2080 Ti, I’ve got a HTC Vive Pro, and I’ve got Index controllers. What I didn’t have was a strong enough stomach. Let me tell you about how I went from excited to soaked with sweat and on my hands and knees, and then ultimately flat on my stomach trying to not vomit. Before we get to that, let’s talk about Cyberpilot’s premise.

Set in the 1980s, you play as a hacker in the French resistance tasked with retaking Nu-Paris, slaughtering the Nazi occupation forces en masse. What’s the best way to accomplish this task? Why, with the mechanized beasts of the Nazi army, of course! Strapped into a chair, you’ll be hacking into the Nazi war machine and turning its jaws on their own people.

With my headset jacking me into a virtual one, I began my run through the first mission. You can check that out in its entirety below:

There’s a pause near the end of the mission where I obviously fade out and back in. This is far from my first encounter with smooth motion VR titles. I’ve built enough of a “VR callus” to be able to handle natural motion, eschewing most snap or teleport controls at this point. I’d go so far as to say my VR constitution is “hearty” by comparison to most. Just before that fade out, I began to sweat profusely across my entire body, and my lips and extremities began to tingle. I paused the game and took off the headset and immediately felt weak in the knees. I went down on all fours and laid my head on the cold floor in something akin to the Yoga child’s pose. From there, I eventually stretched out and laid there for roughly 20 minutes.

I have never had this severe a reaction to VR motion sickness. Not with the first games that hit, not when I was using an underpowered video card, and not when I tried to use a VR headset while I had a mild cold.

To confirm that it wasn’t just me, I had my wife don the headset and take the helm. She has had zero problems with VR sickness, able to handle even the most intense titles for extended periods of time without issue. Within 30 minutes she felt queasy and had to quit as well. I’m not sure what is causing such severe nausea, but it’s very pervasive.

Beyond smooth turning, there is an option to use snap turns combined with the option for a small, medium, or large vignette. The vignette puts a black ring around the scene, giving the eye something somewhat stable to focus on. In practice, these have little effect on the overall motion sickness problem. Neither my wife or I were able to tackle the game more than one level at a time, with long swaths of rest in between.

Supposing for a moment that MachineGames can figure out whatever is causing motion sickness, they are completely unable to resolve the other problem with Cyberpilot — it’s extremely short. The video above represents a full 25% of the game in its entirety. Between missions there’s some exposition and introduction to new murderbots, but this game will churn your stomach for about three hours at the most.

There is something completely baffling with Cyberpilot from a technical perspective. If VR is something you like to share with your friends and family via screen mirroring, then you’ll be disappointed to see the left eye / right eye presentation that VR games launched with over eight years ago. It’s expected that VR titles have the ability to be mirrored fullscreen, but here the only option is the two circle approach with the large round apertures that obscure most of the screen. The capture I pulled was accomplished by mirroring only the right eye, but doing this meant not having any audio. I finally managed to pull something cohesive together by running the mirroring in a window, and then layering the VR in another window and dragging it out of sight into the corners. It makes for clunky capture, and it smacks of rushing it out to match the release date of their other game, Wolfenstein: Youngblood.

With a sour stomach and a lot of disappointment, Wolfenstein: Cyberpilot delivers a gorgeous visual feast with more motion sickness than I’ve encountered in any VR game to date. Insult to injury, it’s also painfully short, smacking more of AAA tech demo than meaty Wolfenstein tie-in.

Ron Burke is the Editor in Chief for Gaming Trend. Currently living in Fort Worth, Texas, Ron is an old-school gamer who enjoys CRPGs, action/adventure, platformers, music games, and has recently gotten into tabletop gaming. Ron is also a fourth degree black belt, with a Master's rank in Matsumura Seito Shōrin-ryū, Moo Duk Kwan Tang Soo Do, Universal Tang Soo Do Alliance, and International Tang Soo Do Federation. He also holds ranks in several other styles in his search to be a well-rounded fighter. Ron has been married to Gaming Trend Editor, Laura Burke, for 21 years. They have three dogs - Pazuzu (Irish Terrier), Atë, and Calliope (both Australian Kelpie/Pit Bull mixes).
Related Articles: VR, Wolfenstein Cyberpilot
Share
Tweet
Share
Submit