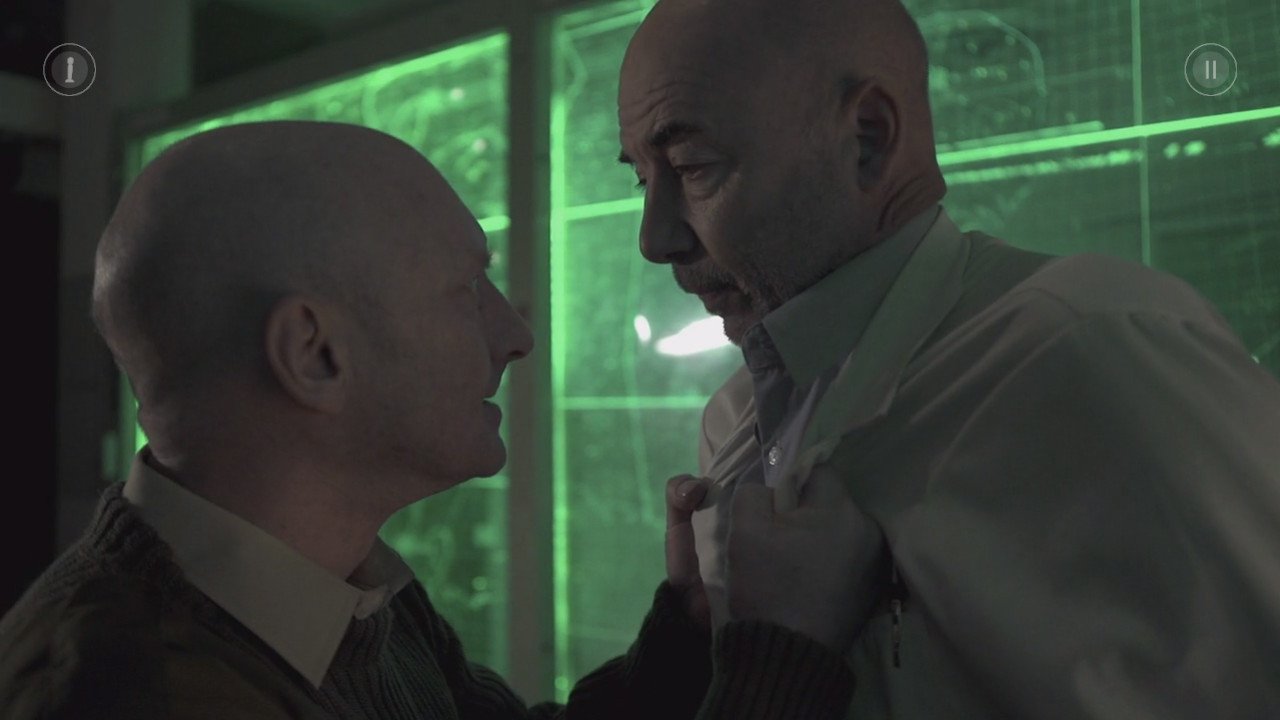 At the time of writing, the North American eShop only has the Hulu app for streaming videos, and even that is restricted to the United States. We need more videos on the thing, and Wales Interactive has created a temporary remedy for this, as it has released the Switch version of Splendy Games’ The Bunker to the portable/console hybrid. However, while it does utilize the handheld capabilities of the Switch very well, there are a few problems still present from the original release that might have you thinking twice about purchasing it.

The Bunker is a psychological thriller FMV game, which means the entirety of it is displayed in full-motion video cutscenes. The story is centered around John, a maladjusted adult who has lived his whole life in a bunker after a mysterious plague has wiped out most of humanity. After his mother passes away, the bunker starts to leak radiation and he must try to fix the problems by himself, all the while experiencing traumatic flashbacks of his former life. The game utilizes point-and-click mechanics, which means you’ll direct John’s movements by hovering over various items on a screen (with some quick-time events sporadically scattered around). I give the Switch version of the game props for utilizing the handheld mode well; I’ve felt that console adventure games struggle with point-and-click interfaces, while using the Switch in its tablet mode feels very natural.

I’ve got to hand it to the developers, the game is pretty ambitious in what it’s trying to do: the whole game is rendered in full-motion video, and the acting performances are pretty top-notch. You can really feel the isolation that the main character experiences, and this is accentuated by the perpetual grittiness and depressing atmosphere of the titular bunker. The story matter is depressing, and considering the cast is rather scant, it was cool to see how the developers could make a mostly solitary experiencing haunting. In addition, using headphones heighten the sound design and can make the game horrifying at times. There are some setups for jump scares, but the horror mostly comes from the empty dread of the experience rather than anything frightening.

While the atmosphere and technical aspects of The Bunker are top-notch, the rest of the package falls flat. Due to its limitations as an FMV, the game is very linear, to the point where it could have basically been an indie movie. You can’t really explore, since each sequence needed to be filmed, so exploration is limited to a few points of interaction here and there. You can collect toys and interact with recordings scattered around the areas, but they have no bearing to the main plot, so it doesn’t feel very involving or satisfying to collect these trinkets. Once you leave areas, you can’t come back to them, something which leaves the entire experience with a sense that you’re only going through different sequences, rather than exploring the whole location. (While there are in-game reasons for not returning, there were quite a few times when I wanted to return to the beginning where I was to see if anything else changed.)

As this is an adventure game, there are some puzzle elements that pop up here and there, but aren’t too difficult. What I didn’t appreciate where the quick-time events, however. They pop up here and there, but are so out of place in the experience that they became annoying and grating every time they appeared. It’s especially cumbersome if you’re playing on a controller, as you have to drag an on-screen cursor to a button prompt before pressing the interact button and continuing. Thankfully, this problem is mitigated when playing in handheld mode, and these QTEs become more tolerable.

The linearity of the game also contributes to the short length of the title; it’s less than two hours long, give or take a few minutes if you choose to explore the whole bunker. Normally, I wouldn’t have a problem with the length, but the first thirty or so minutes feel like padding as you have to do a few repetitive tasks before the mains story begins. Unlike Subsurface Circular (which is a bargain considering that it is of similar genre and length), this game is $12.99, and I feel like it’s a little too steep if you’re thinking of purchasing this on impulse. While I do understand the limitations of FMV titles, looking back, I didn’t really see any reason to go back to it after I completed John’s journey once. I enjoyed the atmosphere, but didn’t want to linger on it any more than I had to.

The Bunker on Nintendo Switch is a little hard to recommend, but will certainly find an audience in those who love horror films and want something dreary and dark on their console. While visually impressive and ambitious, it unfortunately falters with its execution and replayability.

Elisha Deogracias is an aspiring accountant by day, freelance writer by night. Before writing for Gaming Trend, he had a small gig on the now defunct Examiner. When not being a third wheel with his best friends on dates or yearning for some closure on Pushing Daisies, he's busy catching up on shonen manga and wacky rhythm games. Mains R.O.B. in Smash. Still doesn't know if he's a kid or a squid.
Related Articles: Indies, The Bunker
Share
Tweet
Share
Submit