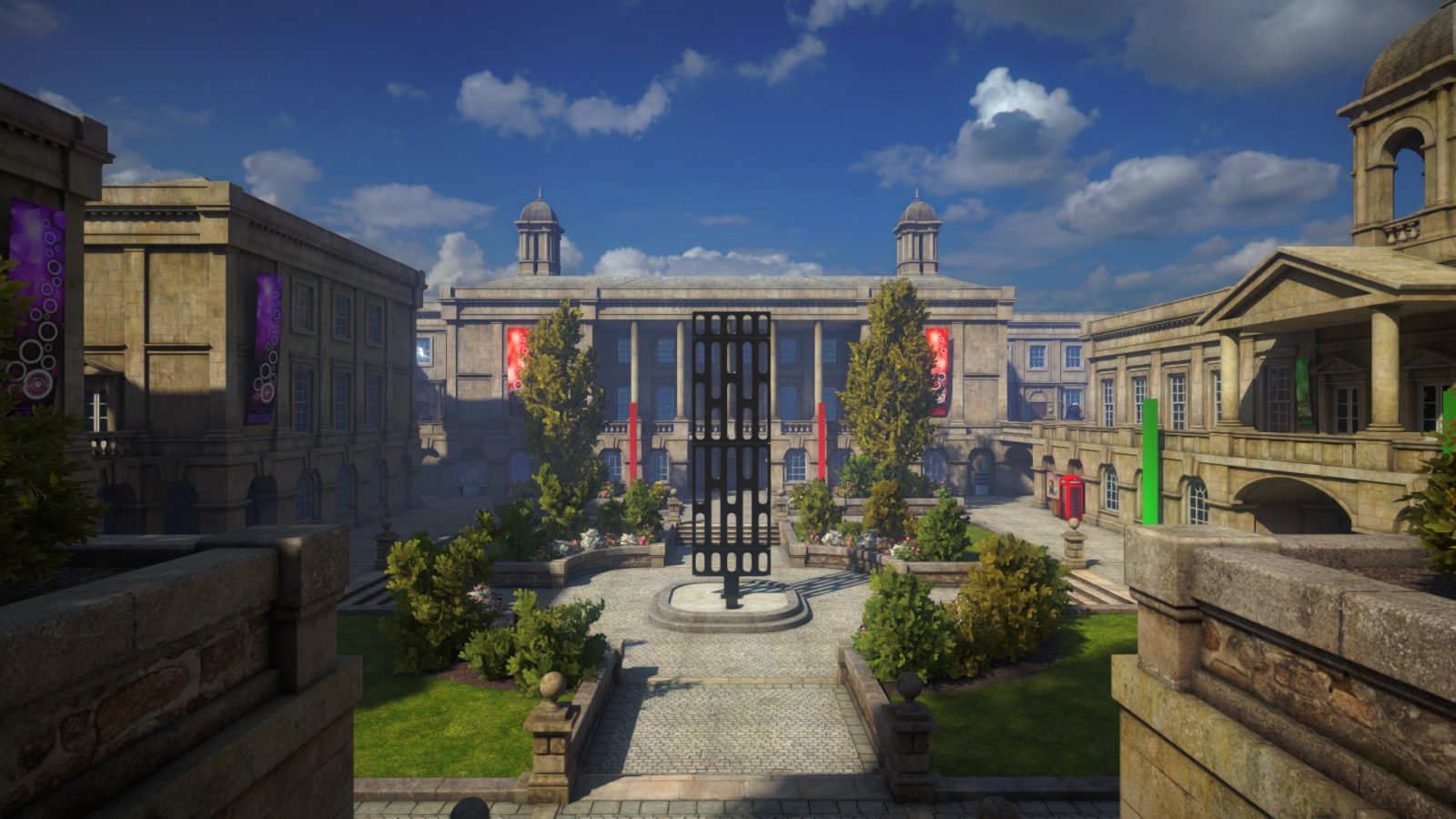 If you’ve played games like Duke Nukem Forever, Earthworm Jim 3D, or even Dragon Age: Inquisition, then you’ve played games that Hayden Duvall, the creator of Old Gods Rising, has also worked on. Duvall had worked at BioWare for 15 years, then after receiving a diagnosis that he had a rare form of blood cancer, he decided to begin making his own games. 10 years after receiving that diagnosis, he created his first title under Bad Blood Studios. For his first attempt at a solo developed title (he produced literally everything but the voice acting) it’s well done. But, as you’ll come to see there’s plenty of bugs that’ll end up ruining the experience.

However, before I get to my grievances, I’ll outline the story without spoiling it. You play as Thomas Winston, who was recently fired as a popular historical TV show host and has since been in hiding. Winston is a professor of Ancient History, so soon enough he receives a call from film director Maz Kayfer to act as a consultant for his new film “Old Gods Rising”. Winston accepts, and he travels to Ashgate University to assist. But, this isn’t just any normal university – he’ll soon come to realize that there’s more to this invitation than what he bargained for. Duvall describes it as a first-person adventure mystery title with the underlying thought of “what would have happened if H.P. Lovecraft had been running the Firewatch team”. 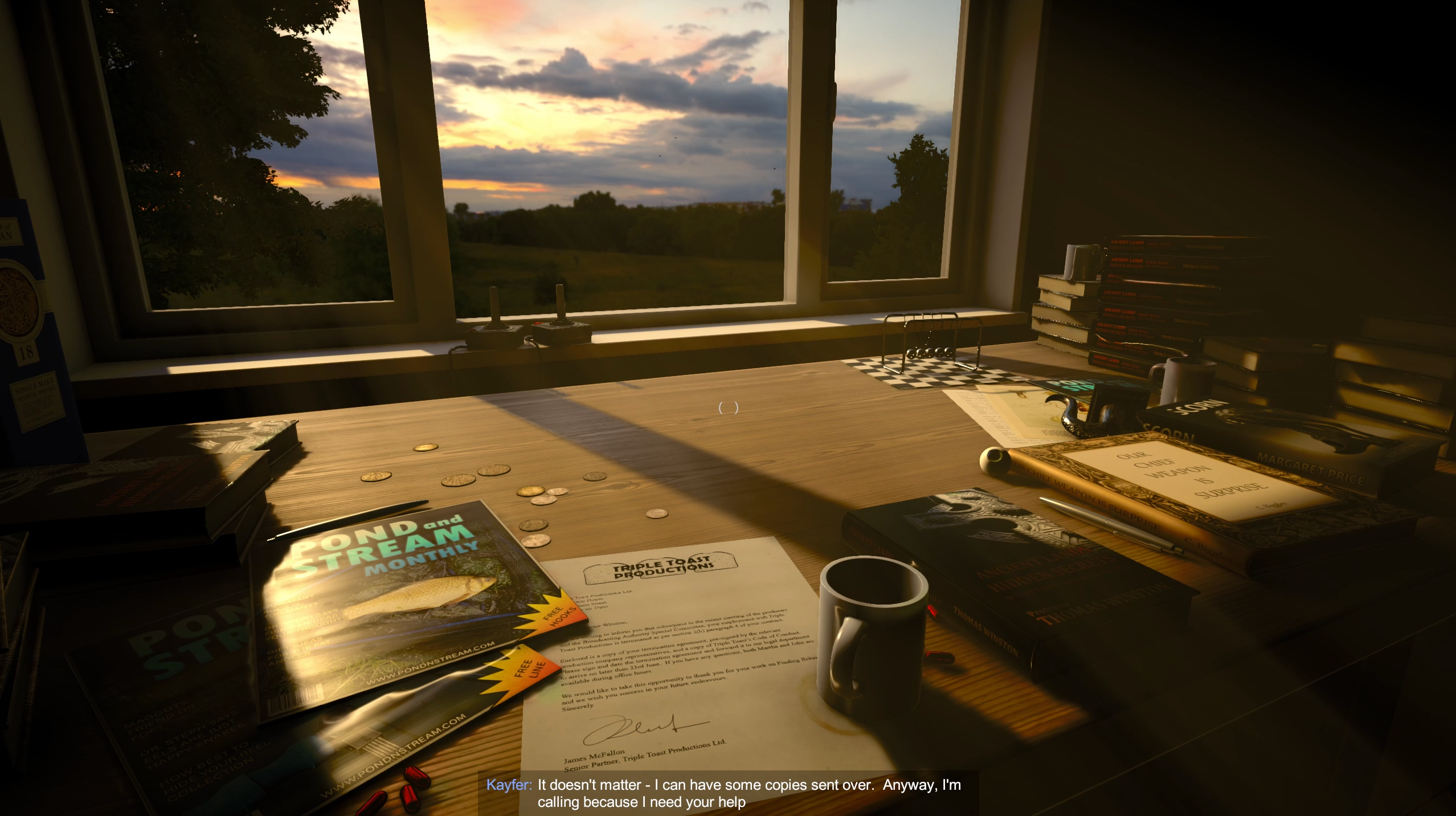 The intro sequence that sets up the main characters.

I better preface that I didn’t manage to complete this title, but I’ll get into that a little later. The gameplay is decent, although it’s a somewhat standard puzzle adventure experience. You’re immediately tasked with learning about the ins and outs of Ashgate University, which means you have access to a number of things. This information can be gathered by either examining objects strewn around the campus, collecting phone numbers and calling them, or completing various types of puzzles. Ashgate University is also massive, like really massive, so there’s plenty of opportunities to explore and understand Professor Winston’s situation. Just note that it’s a bit of a walking simulator for that reason.

As I said, I didn’t get a chance to finish this one, but I really wanted to. The only reason holding me back was the current state of the game. The game is simply too buggy, and those bugs completely break the game. Of course, bugs can be fixed in a later update, and I’d welcome the opportunity to re-review the game once these issues are fixed, but for the most part for the first release of the title, they’ve held me back from being able to explore this very interesting, very detailed world. Firstly, the rendering engine that’s used has done a very poor job for this title. If you’re unaware of how a game renders its level(s), I’ll explain briefly: only what you see is rendered, nothing else exists outside that field of vision. For that reason, some games have the issue where certain areas of the level haven’t loaded yet, allowing you to easily fall outside of the map. Unfortunately for this title, it happened constantly. If I turned a corner then there was a chance the path I was on wasn’t rendered completely and I’d just fall out of the map. That was very painful, but it was easily fixed by quickly loading an autosave (thank god for the amount of autosaves in this one). 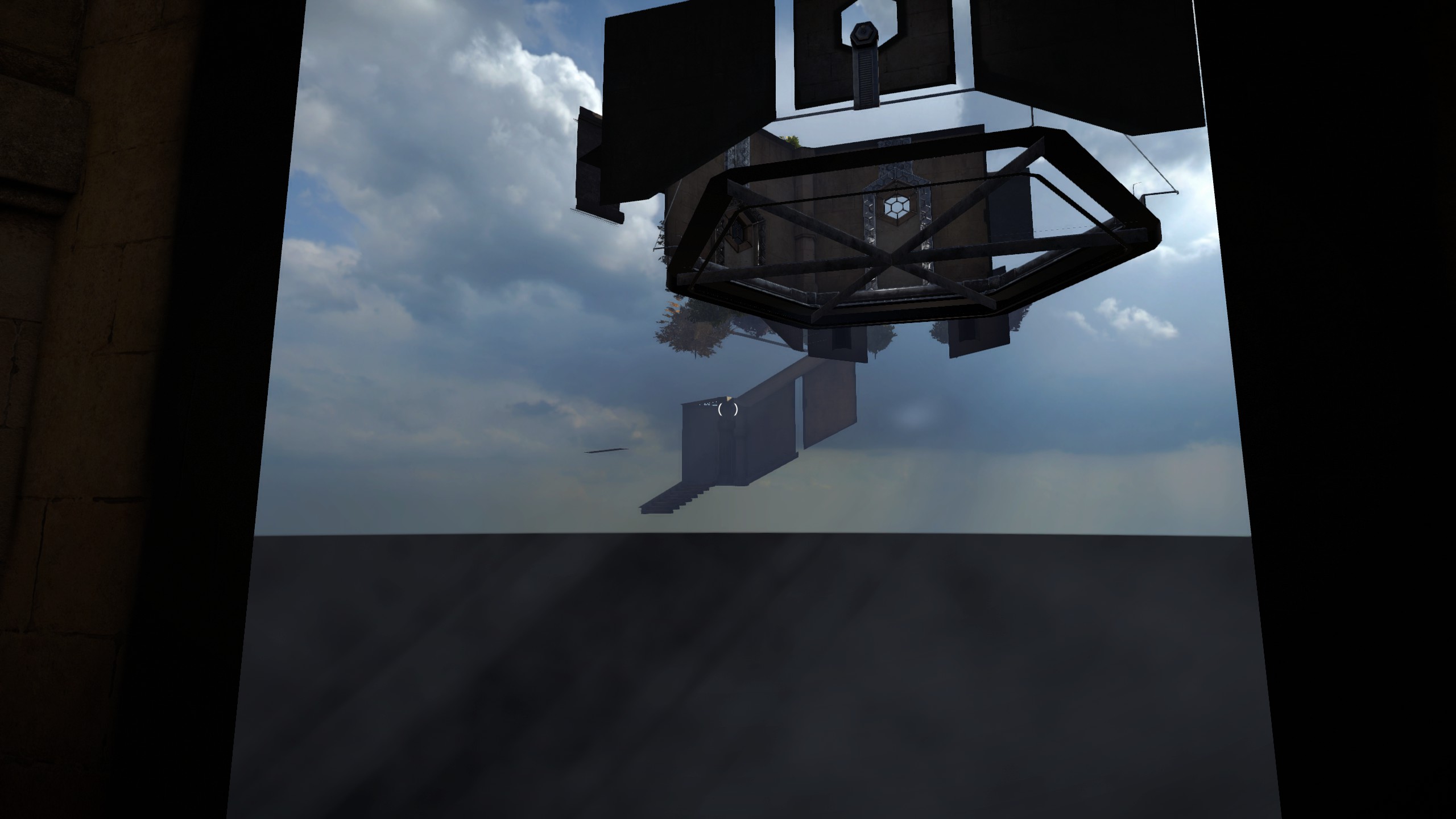 There was one point where I went through the outside of the campus to explore, walked over a specific point on the path, fell halfway through the floor, then I was slingshotted back and forth while the game attempted, and failed, to relocate me back onto the ground.

Here’s that rubberbanding issue that I faced.

There was only one other bug, but it was the most irritating. I’m not sure why the title was designed this way, but every time you loaded into the level or pulled up the pause menu, you’d have to click the screen in order to regain control of the character. That’s not the issue, the issue is that if you load into a level and attempt to take control in the only way that is possible, then the mouse will get locked into moving only left. Think of it as stick drift, except that you’re using a mouse and you can just fix it by flicking to the other side of the screen. Many attempts of reloading saves, relaunching the game, and reinstalling it still didn’t fix it. But, when it somehow did work, that was my only opportunity to get a chance to play and review the game. That’s disappointing, but I’m sure that could be fixed in later updates as well.

I have a number of other grievances as well, but I’ll briefly mention them instead. Since it was set in a university, I didn’t quite understand the choice of level design. There were so many winding corridors and hidden paths, none of which made sense for a university. It was way too easy to get lost in, and not in the “I’m new to school” kind of way, but more like an “I’ve been here for 3 years and I still don’t know where the toilets are” way. Though it did help to have access to the campus map that was located around the campus itself, it was still too hard to work out what exact path I should take. 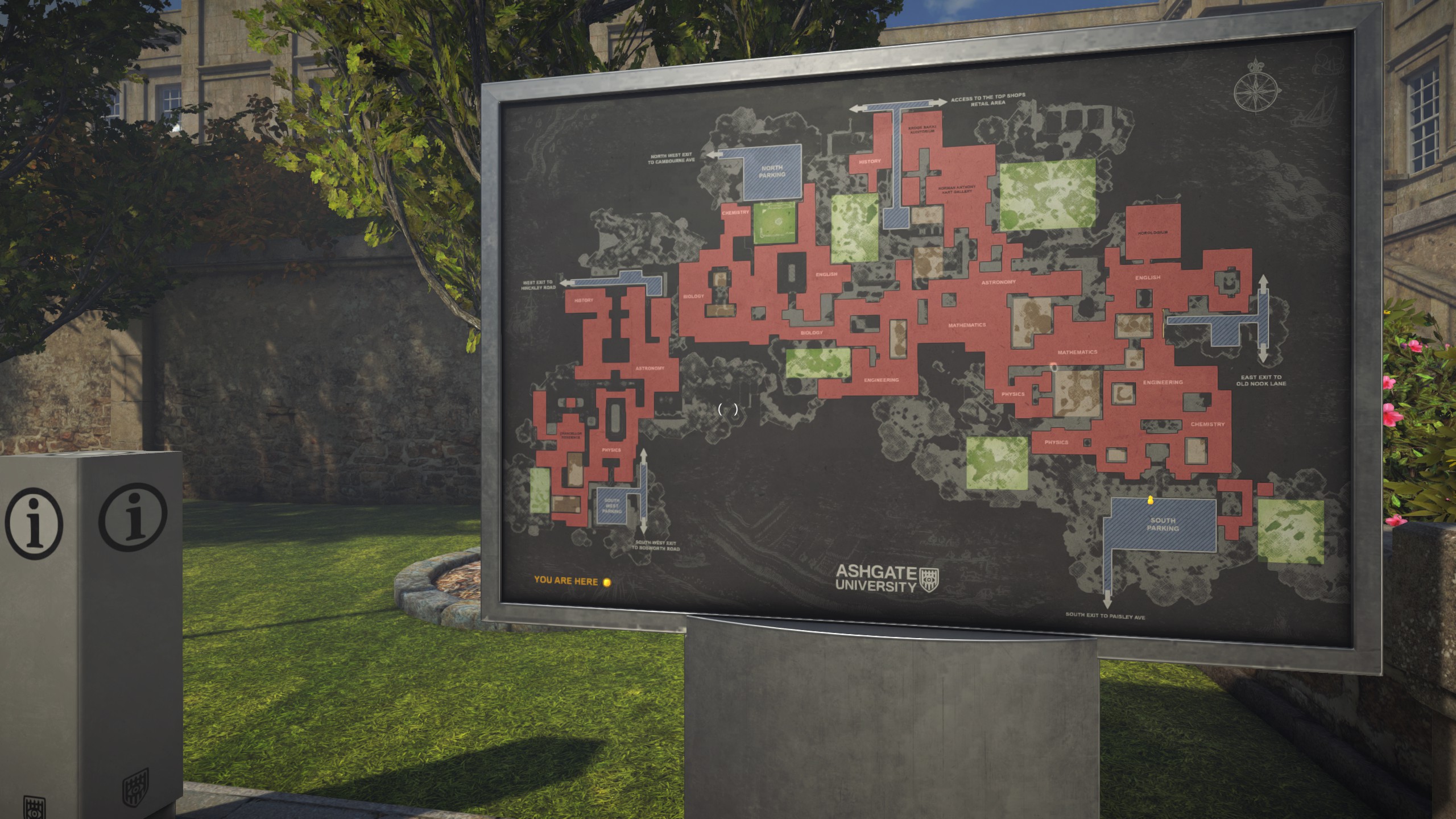 This was a great feature and felt necessary for a game with large, confusing spaces.

There was also no option to change graphics or sensitivity settings while playing, so I couldn’t confirm if the rendering issue was due to the graphics being too high (although I was getting at least 120 fps). I also found that when new load zones were reached, the frame rate would drop drastically. Plus, timed events wouldn’t occur if you moved into an area too quickly. For example, there’s a woman trapped in a drainage tunnel, and if you went inside it while she was speaking, you had to crawl back out of it, then go back in, and then you’d hear what was meant to happen next. Lastly, while the audio design is amazing, especially when you notice the nuances from the environmental effects when you move around different areas of the campus, there were times where the audio would stammer or cut in and out. When it happened, it made things like phone calls a bit jarring to listen to.

Although, with all its bugs and glitches, it still felt very fun. The story from the get-go is very interesting, and I felt hooked to keep playing. The puzzles might be easy, but there’s so much to explore and understand in this world that the challenge level was far less important than the experience of it all. There’s plenty in this title to be worth the $20 that it’s being sold for, but I can’t recommend this one until all those issues are dealt with. As of right now, at least for my experience, it’s unplayable.

Old Gods Rising is an unfortunate mess. While it has a story that immediately hooks the player, a world that’s begging to be explored and understood, and boasts fantastic environmental sound design, the current state of the game is unplayable. The numerous bugs and glitches restrict this game from being a great title. Until those bugs are patched out, you’re better off spending your money elsewhere.

With a deep interest in writing, Ben followed that into a Journalism degree. As an avid lover for gaming, he is constantly expanding his library with console, PC, and VR games. He's obsessed with stealth games and loves hunting down the smallest of details inserted by devs.
Related Articles: Old Gods Rising
Share
Tweet
Share
Submit