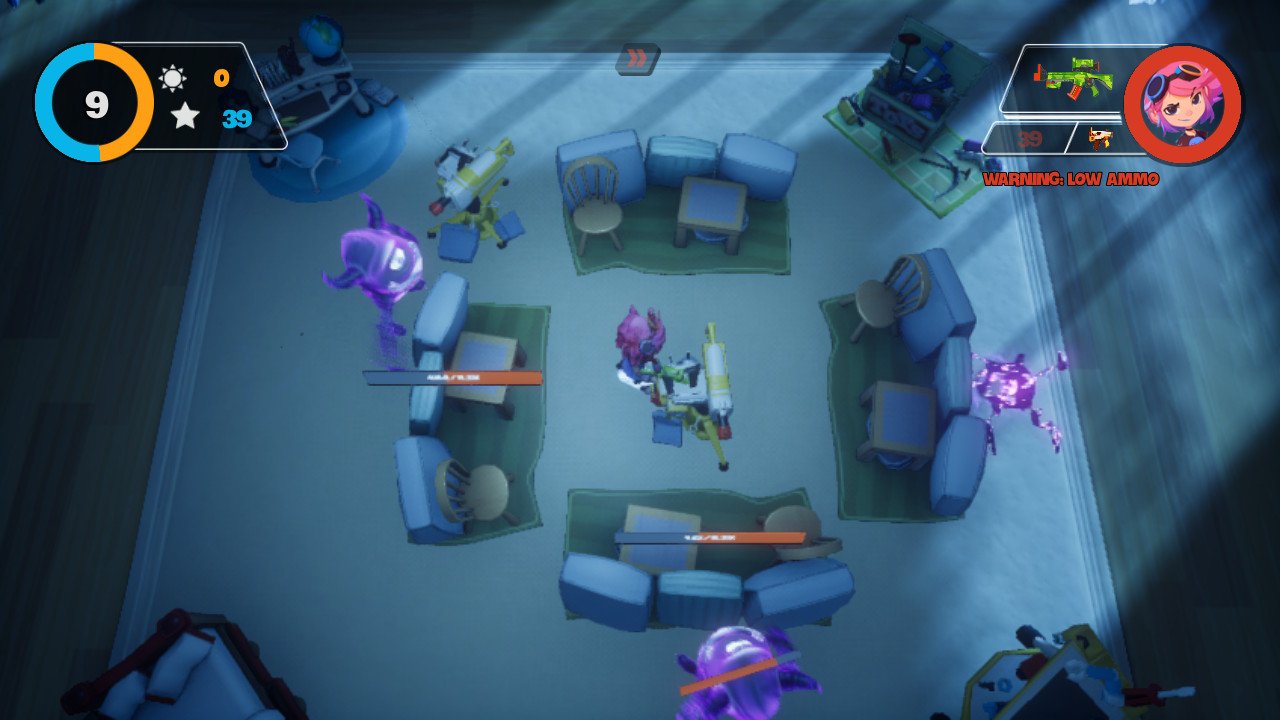 Like most young children at the time, I had an irrational fear of the dark. (If you didn’t feel scared when your feet were sticking out of your blanket, you must have been very courageous.) I would dream of fighting back the imaginary monsters with swords and other makeshift weapons of my imagination, and I would imagine most of you would too. We Are Fuzzy seems to have capitalized on this idea and created Sleep Tight, a twin-stick roguelite with a very imaginative premise. While there are some issues limiting its appeal, the game is still a pretty fun experience for those looking for a considerable challenge. 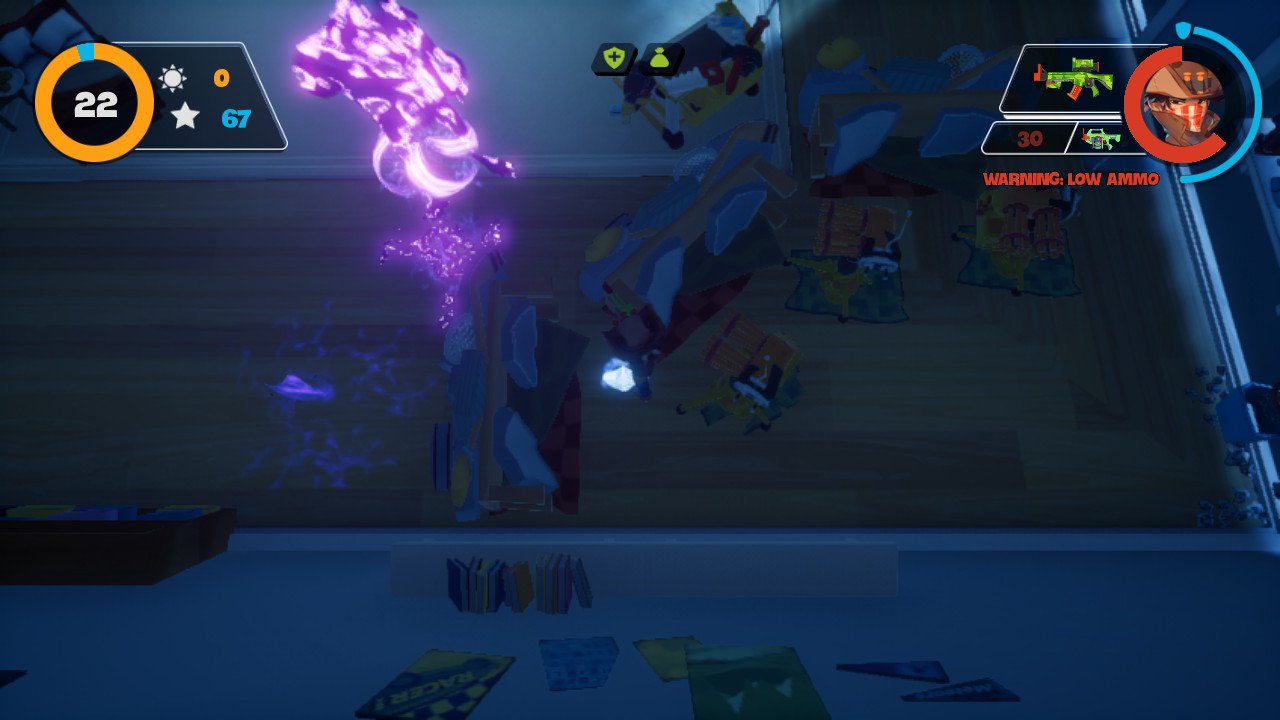 Sleep Tight lets you control a group of kids as they battle the creatures of the night using an assortment of family-friendly firearms. Your venue is a square children’s playroom, which doubles as an arena when the baddies come out at night. You select one kid and try to survive for as long as possible with the help of weapons and walls. During the day phase, you’ll spend suns (which is currency granted automatically each day) and stars (which is currency earned for shooting monsters) to build structures and research power-ups that will help you during the night phase. During the latter, you’ll have to take advantage of the twin-stick shooter mechanics and run away from various monsters while making sure your health doesn’t drop to zero. If you do end up succumbing to the monsters, you’ll get a score tally as well as a grade performance based on how well you did.

The day planning phase is just as important as the night action phase, as you’ll need to prepare yourself before heading out. During this time, you can freely move around the room and interact with one of four stations which allow you to buy upgrades or weapons. You get suns each day, and by spending them all, you’ll enter the night phase. Suns are usually used for things like replenishing ammo, healing, or building walls and turrets. Stars and suns together are usually used to research upgrades for things like unlocking and upgrading weapons as well as passive and active benefits (like max health), so you’ll need to try and shoot some monsters if you want to unlock what you need. While it’s certainly possible to unlock everything in a single run, it’s rather difficult to do it so you’ll need to focus on what playstyle you want to use in order to survive. 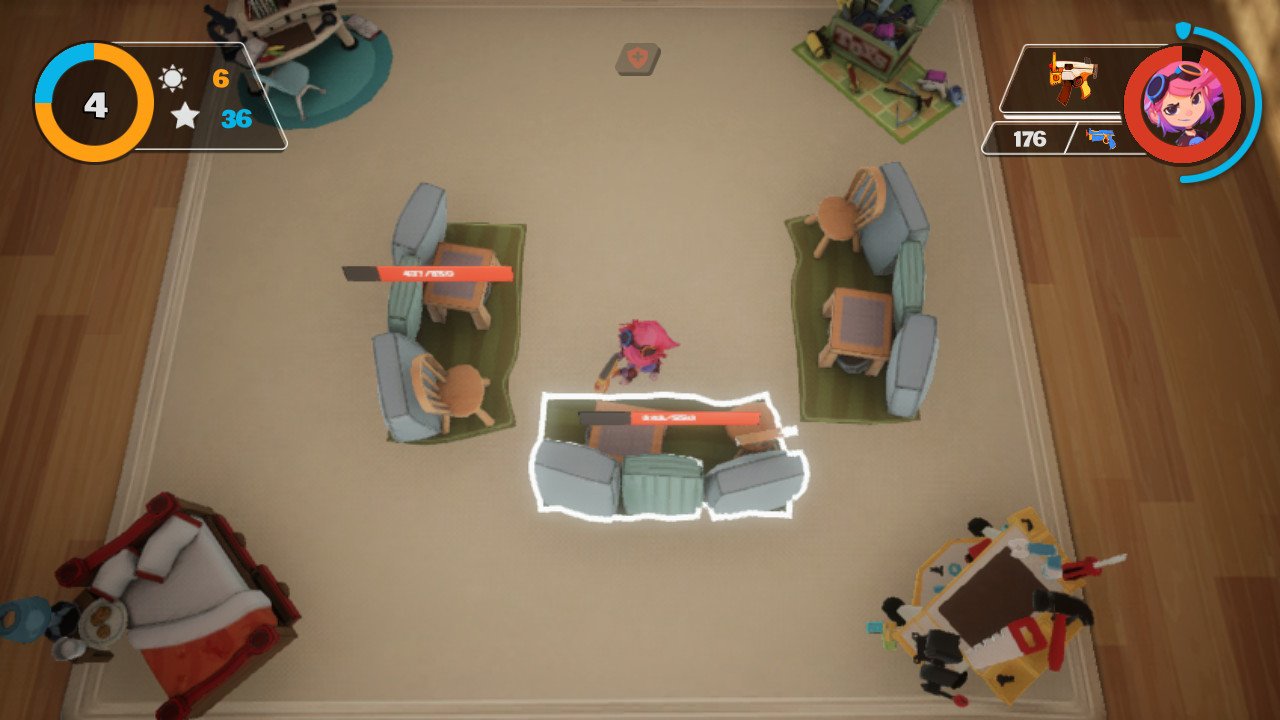 The night phase is a top-down twin-stick shooter where you’re alone with monsters that continually chase you around. It’s here where the power-ups are important, as you can easily go down in mere seconds should you be careless. While nights are very brief, the enemy behavior can be brutal after you step away from the easier characters. You can exploit turret fire as well as stronger weapons, but keep in mind if you run out of ammo during this phase, you won’t be able to gain any more bullets… erm darts until you go into the next day. There IS a collector powerup that can drop ammo, but you’d better make sure you have a turret or upgrade that can make you destroy monsters without shooting them.

Not every kid is available at the start and must be unlocked through a set of requirements (such as surviving a set amount of nights in a single run or beating extra tough enemies with each gun). In addition, each kid has special powers and difficulties (such as equipping a helpful weapon at the start of the game or making more power-ups effective), so using them based on playstyle is encouraged. They come with different voice lines and personalities, and while this dialogue will repeat itself frequently, there’s enough here to flesh them out and make them distinctly different. 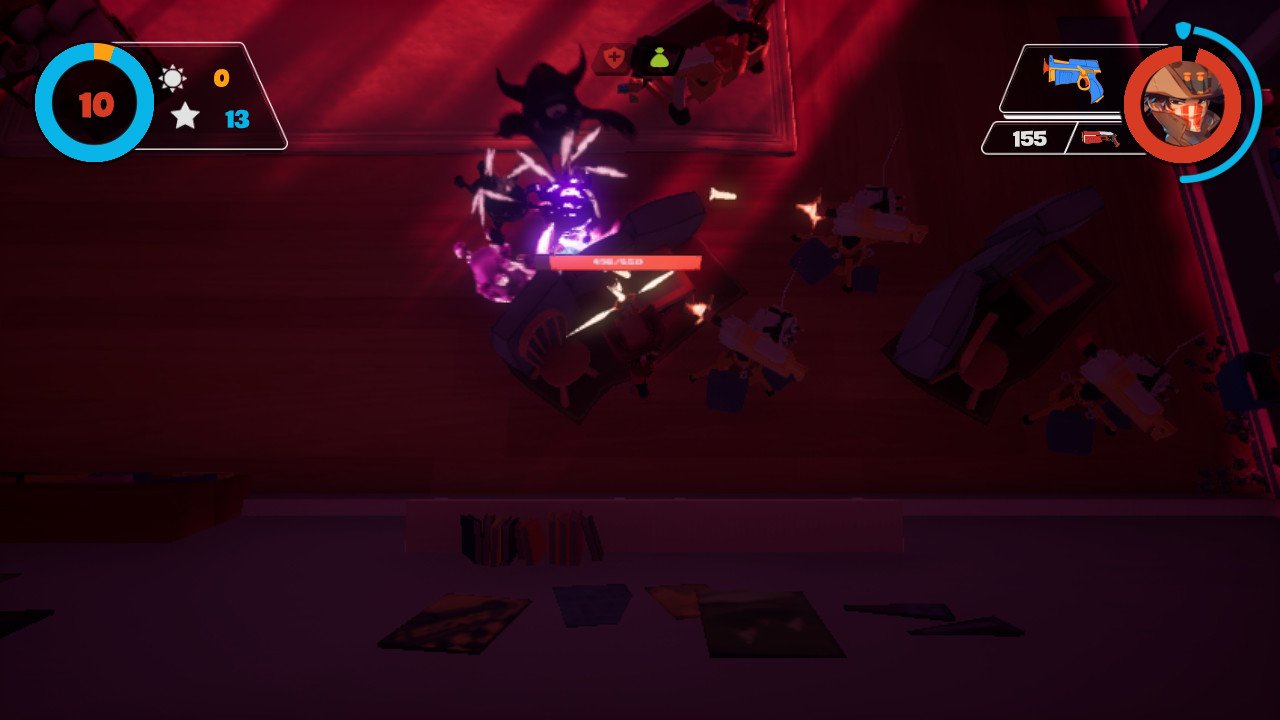 I enjoyed the thrill of not knowing if I could survive the next night and the climbing challenge that occured within the night phases; every tenth night, a blood moon appears and enemy behavior and difficulty are increased to an exponential factor compared to the preceding nights. Sleep Tight is rather strict on managing your resources, and harder difficulties will make you feel the pressure of saving your stars and ammo while running away from monsters. For an E-rated title, it can get fairly difficult at times, which is great for those looking for a challenging twin-stick shooter.

However, as much as the game appeals to those who want a family-friendly roguelite game, the enemy variety is quite limited, with only a handful of types ready to ambush you. Each run feels distinct in its difficulty, but the scenery and enemies are similar throughout each of them. It is still a unique setting, and the child characters do give a little more personality to the package, but the repetitive environment and gameplay loop can start to feel a little stale after a few hours. 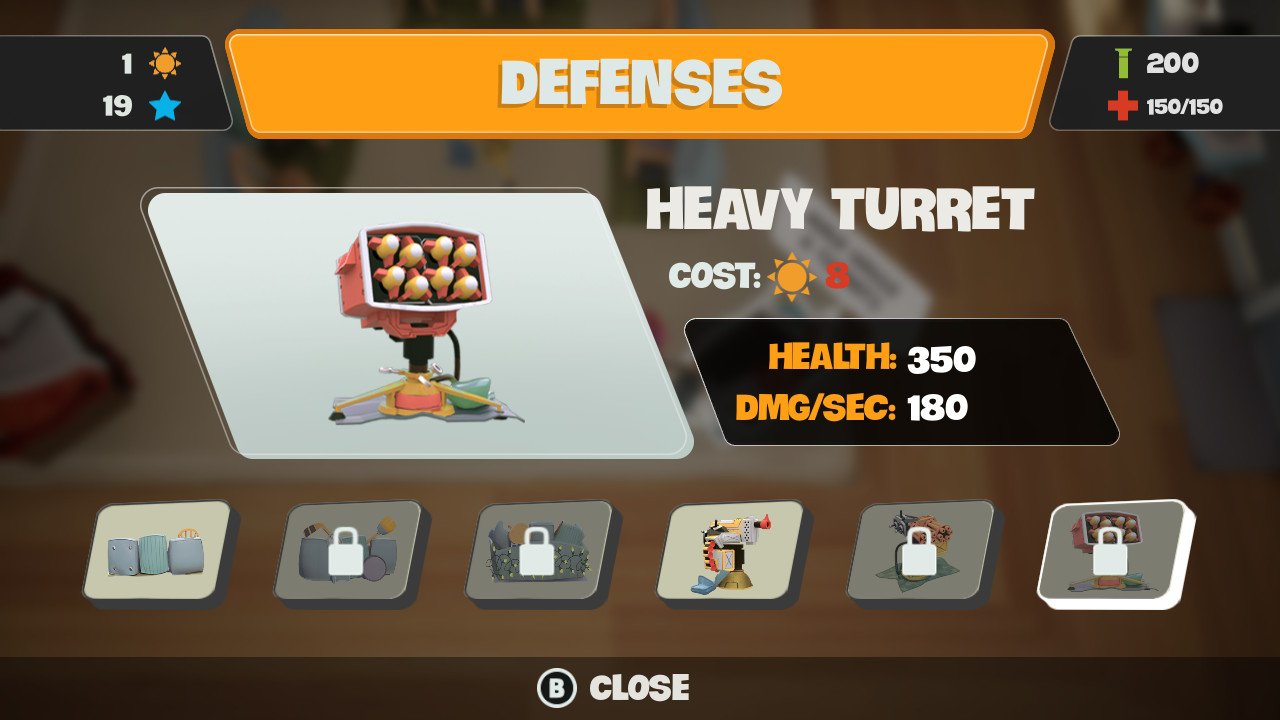 Sleep Tight is a decently fun twin-stick shooter with roguelite elements. While the scenery and enemy variety are something to be desired, those who want a challenging time waster should try this.

Elisha Deogracias is an aspiring accountant by day, freelance writer by night. Before writing for Gaming Trend, he had a small gig on the now defunct Examiner. When not being a third wheel with his best friends on dates or yearning for some closure on Pushing Daisies, he's busy catching up on shonen manga and wacky rhythm games. Mains R.O.B. in Smash. Still doesn't know if he's a kid or a squid.
Related Articles: Indies, Sleep Tight
Share
Tweet
Share
Submit