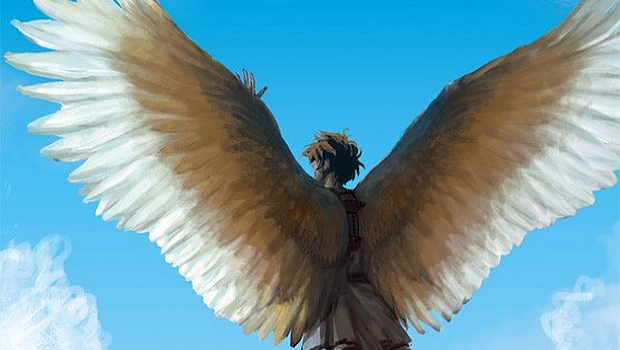 If you’ve played Liar’s Dice, you are not only a good citizen, but you already know the basic rules for Icarus, Reiner Knizia’s latest production, published by Victory Point Games.

That’s right, popular pub games can make strong backbones for new board games. I’m from Wisconsin and I spent my formative years with a beer in my left hand and a leather dice cup in my right – my grandfather owned and operated a bar for twenty years in Forest County, heart of the north woods. I’ve played good ol’ bar dice, which is kinda like Yahtzee. You get three shakes and try to get more of a number than the next player (loser buys).

There’s also Ship, Captain, Crew, where you shake five dice, trying to get your ship (6), captain (5), and crew (4) in that order. You get three shakes, and once you get your 6, 5, and 4 you can accumulate points on the last two dice (loser buys).  Klondike is five-card-draw with dice (loser buys), and Tally-hold is just a shake and total ‘em up (loser buys). In the spirit of the review, I’m writing this with a beer in hand and a couple empties already littering the table.

All those other games are good for getting blitzed, but Liar’s Dice is the thinking man’s pub game. It tests your nerve, stamina, and your math skills. The chance of shaking any side is 1/6, so the likely result of any set of shakes is 1/6 the total number of dice played. If you have four players, then there are twenty dice in play, so the expectation is that, uh, oh my head hurts.  I think the answer is three, although I barely remember the question. That sounds right, and if you play with the variant where one’s are wild, then the odds double, so that a likely outcome of any specific number having been shaken on twenty dice is seven. If successive rounds make the math too difficult, just count the number of players, and double it if playing with wild dice.

Math is hard, hence the lying component of Liar’s Dice. Because the result of every shake is hidden from other players, and since you always know your own result, the challenge is in stating a number that forces your fellow alcohol—err, I mean, friends to call your bluff. If you shake four 4’s, and the probability of each other player having a 4 is one in six, then you could reasonably declare ten 4’s (including wilds).  Your playing companions would be hard-pressed to let that pass, and when they call your bluff and reveal ten 4’s, you drink for free! But if the total is nine 4’s or less, you buy the round. This can be a super-fun game to play, but by the end of a long night of Liar’s Dice, everybody is a loser.

Being a good German, Knizia has no doubt shaken his fair share of dice cups. But playing bar games for fun at home is only appropriate in places like Wisconsin where we buy Kessler’s by the case and where beer flows like water. Knizia smartly repackaged Liar’s Dice as Icarus. Instead of dice there are cards and instead of drinking there’s, well, there could still be drinking, but if you’re underage or out of ice, you can instead fly toward the sun on wings fastened with wax.

If you’ve read this far, the basic game plays pretty much as you expect. It’s kinda dull without libation, actually. But Knizia is no dummy, and he’s tweaked the probabilities and created game play variants to make Icarus more fun.

Each of the seven colored decks have fifteen cards, with numbered values 0,0,0,1,1,2,2,3,3,4,4,5,5,6, and 7. The sheer volume of cards make the math difficult and the distribution further complicates even serious efforts to accurately approximate scores. Players start with a hand of one card from each color. An additional hand is dealt out of play, face-down. Play then proceeds with a card step, bid step, and challenge step.

During the card step, players may swap out a card from their hand with another card of the corresponding color, discarding face up for all to see. Since higher value cards are more advantageous, it makes sense to discard 0’s, 1’s or even 2’s or 3’s, but there is no guarantee the card picked up will have a higher value.

After a challenge is made, all players reveal from their hands the bid color. If the total of cards in play is equal to or greater than the bid, the bidding player is safe, and the challenger receives a feather token, otherwise the bidder is unsafe and he receives the feather token. Feather tokens have two sides. Reveal the -2 side if the difference between the bid and the actual total is two or one, and reveal the -5 side if the difference is greater than two.

The game ends immediately when any player receives four feather tokens. All players total the value of their feather tokens, and the player with the least negative score wins. This is not terribly inspired, but it doesn’t take a lot of thought to make this into a hard-hitting drinking game.

If you prefer to stay sober, I highly recommend using the flight cards. Flight cards are a separate deck with specific instructions that can affect play. Flight cards can be acquired by either revealing a card for all to see, or by winning challenges. Examples of flight cards:

Plant Wax: Play when your bid is challenged (before cards are revealed) to add 3 to the total.

Insight: Play at any time to examine another player’s hand.

Eagle Eyes: Play as your card step to examine all the cards in any one deck and then reshuffle it.

Rolling Thunder: Play as your card step. Select a color and force an opponent to discard their Icarus card of that color and draw a new one.

The theme is a throw away – the game mechanics could have been applied to anything. From that standpoint, this is a weak effort from Knizia. The price feels right for what you get in the box, and there is certainly replayability, especially as a party game with drinks on the line. If you’re into binomial equations and other math nerd stuff, or you think you’re a good liar, this game is for you.

This is probably a better game for younger players who are not old enough to hang out in pubs with a leather dice cup in hand and drinks on the line. The flight cards add depth and make the game decent filler, but I hoped for better from the mind of perhaps the world’s greatest game designer.

Mike is a journeyman musician, writer and amateur astronomer who makes a living as a data engineer in Port Angeles, WA. Mike is also a hopelessly obsessed but very marginal player of Magic: the Gathering.
Related Articles: Icarus, Tabletop
Share
Tweet
Share
Submit