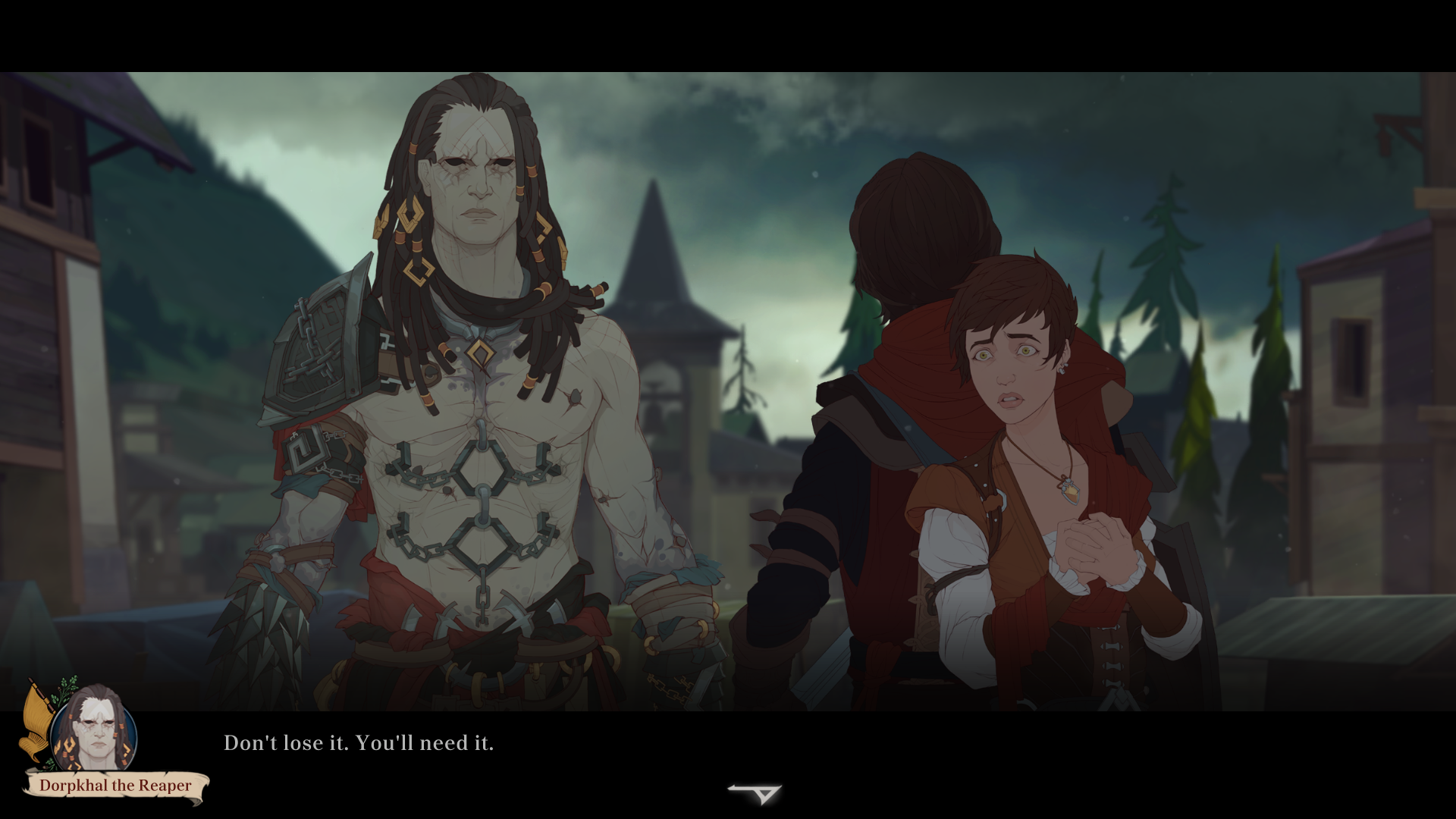 Ash of Gods is an impressive undertaking in every sense, featuring a robust story, plentiful characters, a complex battle system, and a truly gigantic world. History is set to repeat itself in the land of Terminum. The Reaping, a phenomenon which has previously killed one in three men, is about to return, though this is predicted to be much worse, as this Reaping is believed to be the last, and will leave neither man, woman, nor child alive. The signs that a Reaping will come have already manifested: people are being affected by searingly painful ulcers on the back of their necks, a curse which turns men into violent lunatics, and the appearance of a strange, murderous, masked race known as the Ense.

The story within Ash of Gods is huge, complex, and reminds me of the writings of Brandon Sanderson, both in theme and in scope. While it’s exciting to get lost inside such a world, I found myself dropped into the middle of an epic story with very little help me navigate the massive backlog of lore, history, races, side characters, and kingdoms. I was often asked to make game-altering decisions a sentence or two after meeting a new set of characters, something which I found more frustrating than exciting or intriguing. Characters face each other while conversing, with the camera flipping the point of view depending on who is speaking. There’s no voice acting, though some characters make a stock noise whenever it’s their turn to talk. Thorn, in particular, makes an elongated grunting sound, which can range from annoying to suggestive, depending on how fast you’re reading, and what kind of noise his conversational companion makes.

The story, which is entirely text based, literally places you into the shoes of a set of three protagonists. While it’s neat to be able to explore the world from these different perspectives, I found the second person (“You react quickly,” “You feign disinterest,” etc) to be an off putting approach. Was I supposed to assume the roles of these characters and act as they would? That was difficult to do, since I knew so little about any of them. Should I just carry on with the game as I normally would? When I did so while playing as the usually quiet Shadow Clan assassin, Lo Pheng, my traveling companions commented that I was talking too much… were they on to me? Did they somehow know that Lo Pheng was nothing more than an avatar, a two-dimensional pawn inserted into their world to do the bidding of a purple haired gamer? Who told them!?

I mentioned that the story is massive, and you will feel like you’re reading epic fantasy. There’s a whole lot of text to read, and even if you read every word presented to you, you’re still unlikely to unlock any kind of a good ending during your first playthrough due to the various branching paths and areas which unlock different sets of dialogue and events. The game is loquacious to a fault. The clues to unlocking a good outcome for the world of Terminum are written right into the script, but you first need to know what to look for, how to get there, and then you’ll have to read through page after page of often irrelevant text in order to identify and act on those clues.

You’ll want to approach your first playthrough with a bit of a thick skin, because if you fail to bring about a good ending, the narrative will scold you for doing so, rambling on about missing clues and how you should have read more. And, just to add insult to injury, because Ash of Gods features an autosave system, you can’t quickly undo a bad decision without starting the entire game over again. These bad decisions can be tricky and surprising, what seems like a benign or normal question can quite suddenly turn into a heated conflict without warning. It does wonders for replayability, but it’s not terribly fun during your first trip through the game. The tone is distinctly melancholy in tone from start to finish. Apparently, no one in the whole of the game feels the need to crack wise, even once, as the end of the world approaches.

Speaking of epic fantasy, the art within the game is truly worthy of such a title. Hand drawn characters, richly detailed, layered backgrounds, and rotoscope animations give this title a stunning look. To be honest, I was initially put off by the artwork, but that quickly changed. One of the first scenes in the game conversation features Hopper Rouley, a protagonist whose face felt distinctly wrong somehow. Something about the lines around his eyes and cheeks felt distinctly not-right in a way I could not articulate. However, I quickly learned that Hopper, and those whose portraits were in that distinct style, are far more than they appear, and this art quickly transformed into being one of my favorite features of the game. Ash of Gods sounds just as good as it looks; the music features several scores perfectly suited to its gloomy, apocalyptic story. Songs range from sullen and mournful to tense and harsh, setting the tone for each scene.

Battles in Ash of Gods are a curious thing; while this is a tactical RPG, developer AurumDust also incorporated a card system which utterly fascinated me at the start. The cards themselves have their own lore within the game; while they were once simple playing cards, as the Reaping approached, they turned heavy as lead, grew hot to the touch, and came alive with power. While this power can be used in battle, many of the cards have somewhat unpredictable effects, such as taking 5 attack from both a random ally and a random enemy. Using a card also, inexplicably, ends your turn, and to add insult to injury, some cards don’t always take effect immediately when used. The entire card system felt far too random and unreliable for a tactical game, so I happily left them face-down in their deck and focused on the less magical aspects of the battlefield.

As I mentioned before, everything in this game is beautiful. Many characters have their own, unique idol and attack animations, and the designs are pretty diverse, given that you’re only going to be encountering humanoids. As beautiful as the animations are, they can be a bit long, and there’s no way to speed them up, causing battles where you have a lot of ground to traverse to drag on and on. I also found it difficult to tell the order of battle, since your ally icons are all lined up on the left side of the screen, while the enemies icons are all on the right side. This made it especially difficult for me to approach combat the same way I did in other tactical titles, requiring me to do a good bit of guesswork which didn’t seem to fit very well with the genre.

Difficulty is one of the most fascinating aspects of this title, as you’ll be able to adjust this from within the world of the game itself, depending on how you play one particular character. By reducing the stats of this character, you’ll weaken the Reaping, causing enemies to spawn with reduced stats; refuse to sacrifice yourself and enemies the world over will become more difficult for everyone. Ash of Gods features a number of ways to play, including a multiplayer mode and a special story mode, which allows those who are less tactically inclined to indulge in fewer battles to better or more quickly enjoy the game’s story, perfect for hunting down those elusive good endings. It also features a convenient autobattle system, which is quite competent at seeing you safely through most encounters.

Time and resources are incredibly tight, meaning you can’t grind for levels. Beyond simply not having the option to seek out random encounters, the onset of the Reaping means that you and your team all require strixes, stones infused with magical energy, in order to stay alive. The magic of the strixes is not unlimited, and there’s a ticking clock, as each day you burn through your supply, causing you to make a number of tough decisions. Do you bring along another party member, bolstering your combat power, knowing that adding an extra person will cause you to burn through your strixes that much faster? Will you pay a hefty gold fine to bail one of your comrades out of trouble, or will you need to use that gold to buy more strixes from a merchant?

All of that said, Ash of Gods is something like a bottle of fine wine: it gets better with age. The first playthrough is difficult; you’ve got very little understanding of what’s going on, what you should do, and what your goals are, and that it can be an almost oppressive experience. The second time, however, you set out with a pretty good grasp on the world’s lore, who needs what items to survive, and who and what is worth the investment of your valuable gold and strixes. Once you’ve powered through the game a time or two, you start to uncover the hidden clues, learn how to conserve your resources, how to uncover the secrets of certain characters, and you start picking up on things you missed before, bringing this massive, gloomy, yet fascinating game down to a much more manageable size.

Ash of Gods is an ambitious game of massive proportions. Beautiful artwork, smooth animations, and a stunning soundtrack set the tone for this melancholy tale. The setting and lore can be overwhelming, especially during the first playthrough, but it's sure to capture fans of epic fantasy seeking to lose themselves in a huge world full of secrets, curses, and curious characters.