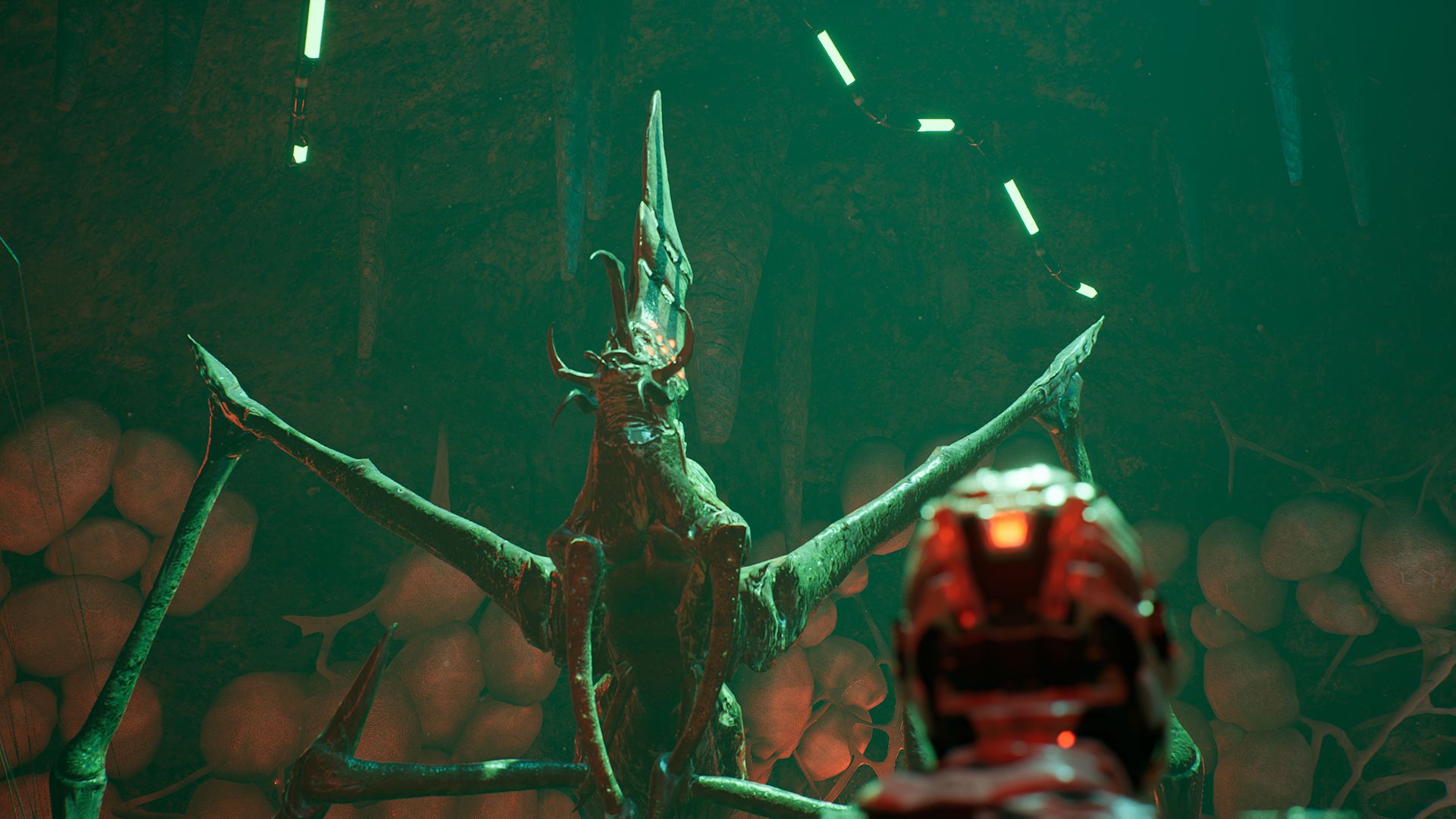 Space truly is the final frontier for mankind. In Dolmen, humanity has colonized several planets and now private corporations are fighting for military and technological power. One such corporation, the Zoan Corporation, has sent Drillers — genetically modified humans — to Revion Prime to collect Dolmen crystals, which not only hold the power to revolutionize space exploration but to also allow interdimensional intersection. Catastrophe hits the Drillers on Revion Prime, leading to a massive struggle for survival against the planet’s many secrets and dangers. You have been hired to bring Dolmen crystals back to the archives as well as eliminate any hostile creatures that have since infested the planet.

What a setting. Dolmen is a new and terrifying action RPG from the small Brazil-based team at Massive Work Studio. The game mixes Souls-like difficulty with Lovecraftian horror, and even a little Dead Space vibe in my opinion. Dolmen starts off very unforgiving as your arrival on Revion Prime wasn’t exactly graceful — make a wrong move and you’ll pay dearly for it. As you begin to explore the first area, you encounter large bug-like creatures that will deal a lot of damage if you’re not quick to dodge out of the way or manage to land a good block. As you move along you come across tutorial nodes that explain how to perform various actions such as locking on targets and how to restore health. Eventually you’ll come across your first checkpoint which also acts as a fast travel point between other checkpoints as well as your ship.

The game features a pretty standard set of RPG mechanics. You have health, energy, and stamina, each serving a specific purpose. Your Health pertains to how much damage you can take before dying, Energy is used to restore health but is also your ‘ammunition’ for weapons, and Stamina is for sprinting, dodge-rolling, and melee attacks. All of these meters can be increased through an attribute system like that seen in games like Elex II, though with some different names, where you gather whatever resource (in this case, Nanites) is needed to increase those attributes. 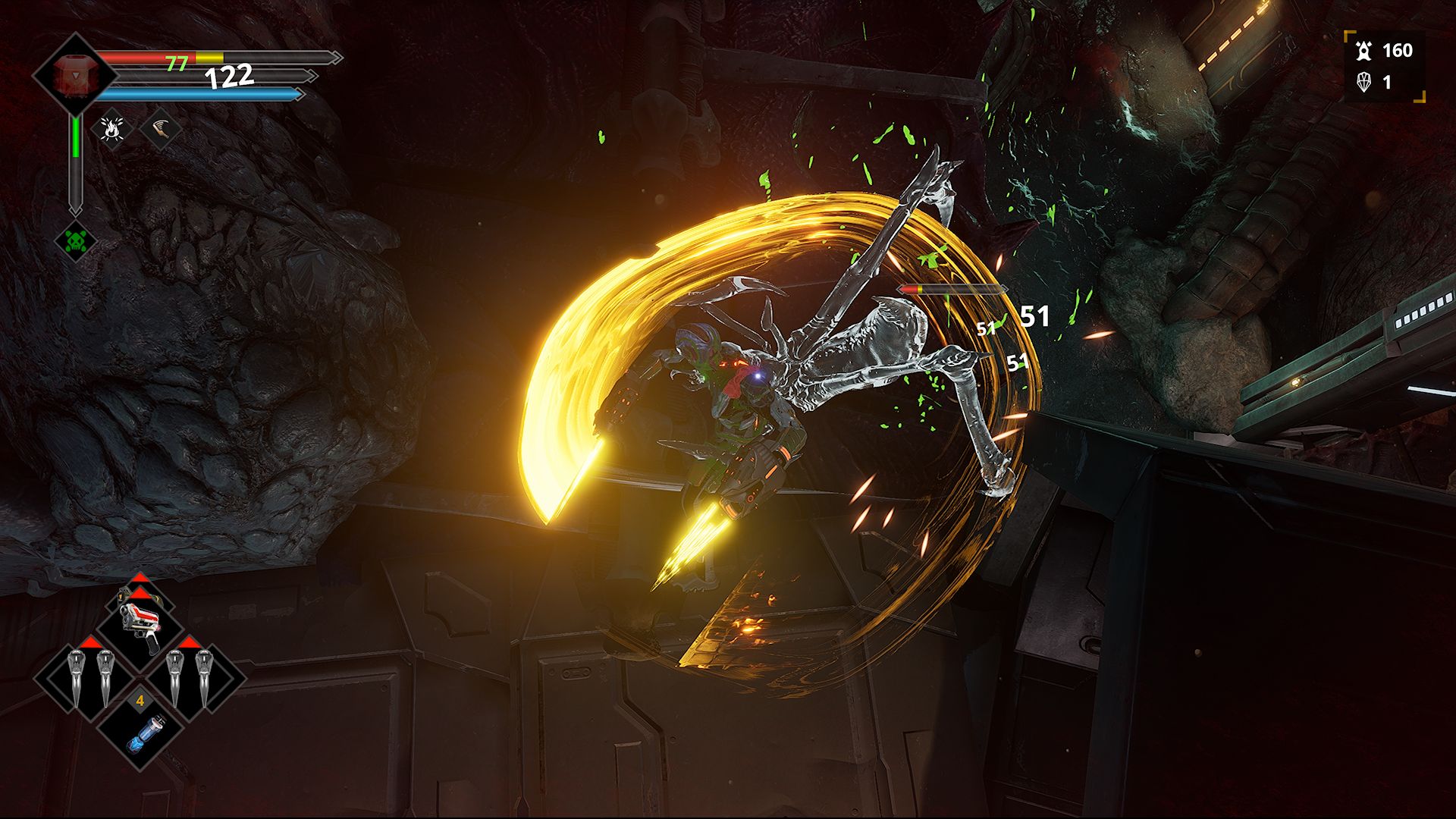 In Dolmen, every enemy you take down grants you so many Nanites. Once you have enough Nanites, you can teleport back to your ship where you’ll find an upgrade pod to spend those Nanites on specific attributes, therefore increasing various stats as well as your character’s level overall. However, each upgrade requires more and more Nanites. Thankfully, the harder the enemy to defeat, the more Nanites you receive. You’re also able to go back and forth between the ship and Revion Prime to simply farm for Nanites as monsters do respawn every time you come back. I had to do this a lot before being able to finally defeat the first boss. I was then promptly smacked back down after proceeding to the next area.

And smacked down you shall be. When you die you will drop all of the Nanites and Dolmen fragments (which we’ll touch on again later) that you are carrying. This is where the other side of the Souls aspect comes into play. You have to return to where you died and walk up to the silhouette of your body to recover these items, but if you do die again before you can get there you will lose them permanently. This can be a huge setback, especially if you are grinding for those Nanites to increase your attributes, so players need to be cautious to avoid defeat. This is where I struggled the most with Dolmen as I’d make a very simple mistake, something like just not hitting dodge, and I’d be down in a couple hits. After a while I learned to start taking things really slow and really tried to focus on just a single enemy at a time as it became very easy to be overwhelmed. It became very time consuming, but in the end I was victorious.

Dolmen may be the root cause of some of my rage as I try and fail and try and fail again, but along the way I’m learning something new every time that helps me in the next go around. It took me a while to finally understand the attribute system and how it would affect different things. I then also discovered how to craft new weapons and gear to make me stronger and grant me new abilities, like being able to set enemies on fire. Aside from the attribute system, there is also a technologies system where the different gear you craft also grants you special bonuses and perks. The game possesses quite a bit of depth that you slowly start to understand as you grind your way through each area. 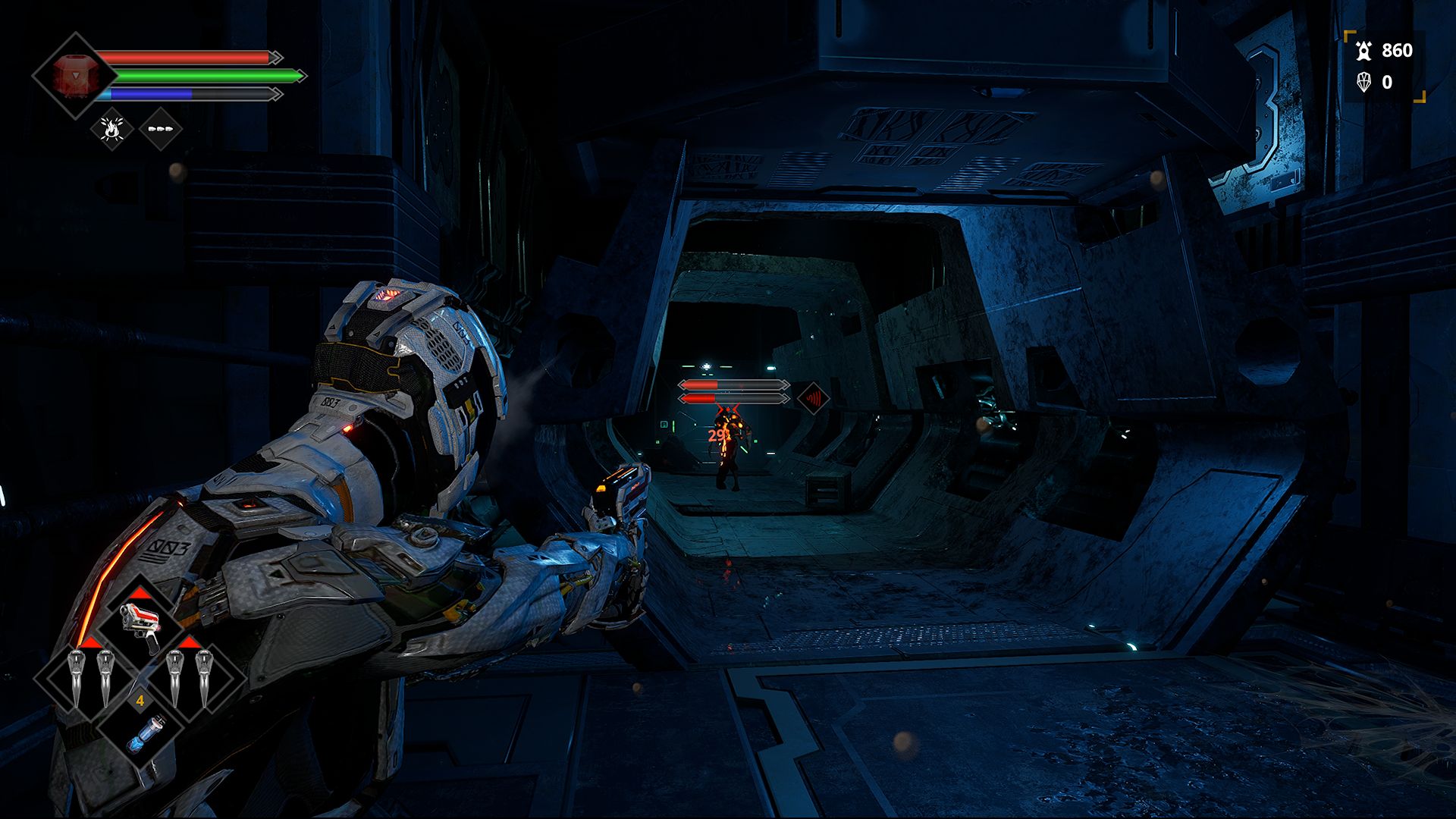 Dolmen is primarily a single player game. You’ll progress through each area on your own, hitting each of the checkpoints, leveling up, and crafting upgrades as you go. The only part of the game that is multiplayer is the boss fights. This is where your Dolmen fragments come in handy as you can use them at a Boss Beacon, which is usually found right outside of the area a boss is located, to call for help, opening up your instance for up to three other players to join. Dolmen fragments can also be used to respawn a boss so you can farm the creature for more Nanites as well as a specific material used to create a powerful boss weapon.

After spending so much time with the game, I really grew to appreciate it. You’ll be made to suffer for hours on end, you’ll feel like giving up, like you’ve been defeated, but then you finally have an “ah-hah” moment or you finally take down that boss that you’ve been grinding for all this time and you’re suddenly filled with that satisfaction and a bravado that has you foolishly charging forward in search of your next foe, only to be shown your place in the world once more.

For a debut launch from a studio, Dolmen is pretty well done. Standards are really high in this day and age of video games, so to expect absolute perfection out of every studio with every game is ludicrous to me. Dolmen has been met with some pretty mixed reviews, and it’s not entirely unwarranted, but I’m also trying not to be too harsh in my own judgment of the game given what I’ve just said and the fact that Souls-like games aren’t generally my cup of tea.

Dolmen is rough around the edges — the game has bugs and glitches, some of the gameplay systems don’t run as smoothly as I would like, and I have spent much of my time playing the game being frustrated. One thing in particular that kept causing me trouble was the target lock feature as it would randomly switch between targets, even targets who were further away instead of those directly in front of me. There were also several times where sound effects were absent, such as when I was shooting a gun or refilling my energy. But for the most part, most of my struggles with Dolmen weren’t due to these issues; they were more from me trying to master a difficult game.

Dolmen provides fans of SciFi and Souls games with another daunting adventure full of defeat and satisfaction. The game isn’t without faults, having a few bugs as well as some inconsistencies with some combat mechanics, but the team at Massive Work Studio have laid a solid foundation. The game provides just enough reward to make the challenge worth it.

Cassie Peterson is an Editor for Gaming Trend but also a sporadic content creator and exceedingly average Rainbow Six Siege player. She goes by MzPanik on Twitter and Twitch and all of the gaming platforms.
Related Articles: Dolmen
Share
Tweet
Share
Submit