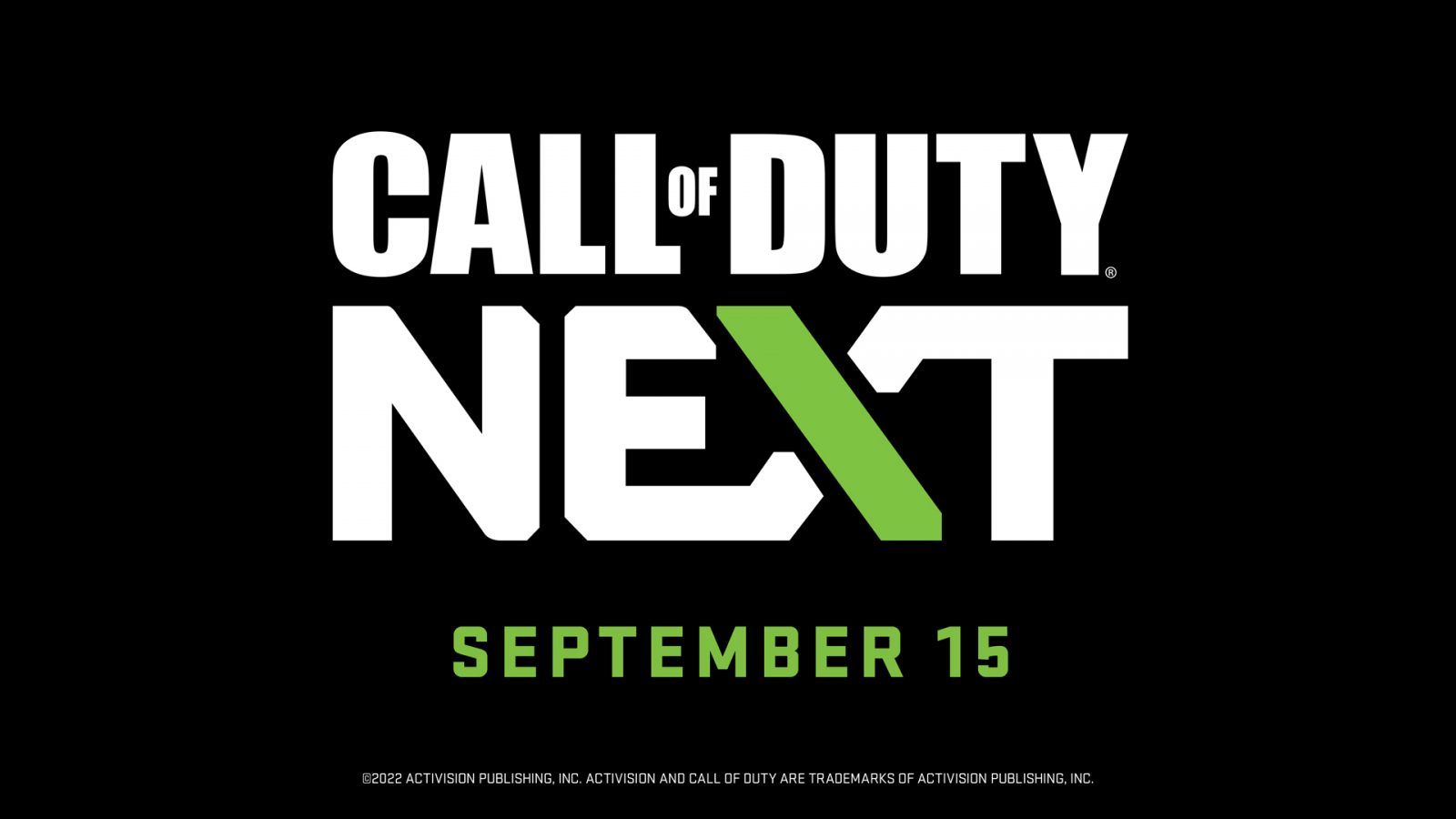 Infinity Ward has begun releasing Intel drop videos, each of which showcases behind-the-scenes details of Modern Warfare II.  These teasers are debuting on all of Infinity Ward’s social media accounts, including their Facebook, Instagram, TikTok, and Twitter. The first video provides insight as to how the developers designed a new map. You can check out a link to the Intel Drop below: 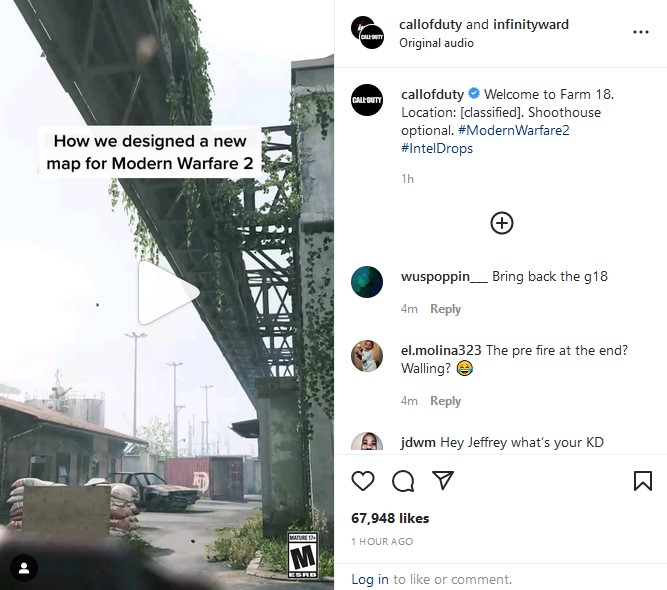 Additionally, Infinity Ward announced Call of Duty: Next, a franchise showcase event, and open beta date times for Modern Warfare II, which you can read about below:

After the incredible conclusion to the Call of Duty: League™ 2022 Season at Championship Sunday, an equally impressive information drop at Champs during the show announced the dates where you can learn more about Call of Duty’s future, as well as the dates for the Modern Warfare® II Open Beta.

Announcing Call of Duty: Next

The announcement at Champs revealed the forthcoming Call of Duty: Next. What’s Next? This is an era-defining franchise event showcasing the immediate future of Call of Duty, broadcast on September 15, 2022. Presented by Infinity Ward, and featuring robust information drops detailing innovations, live gameplay, and a whole lot more, expect to learn the following:

What the imminent future of Call of Duty will look like, including many more details regarding Modern Warfare II, information on the next Call of Duty®: Warzone™, and more on the mobile version of Call of Duty: Warzone (also known as Project Aurora).

A multitude of your favorite streamers at the event, playing the games in real time.

Note: If you missed the opportunity to obtain a code during Champs, make sure to keep an eye open for more opportunities to receive Early Access Beta Code drops! 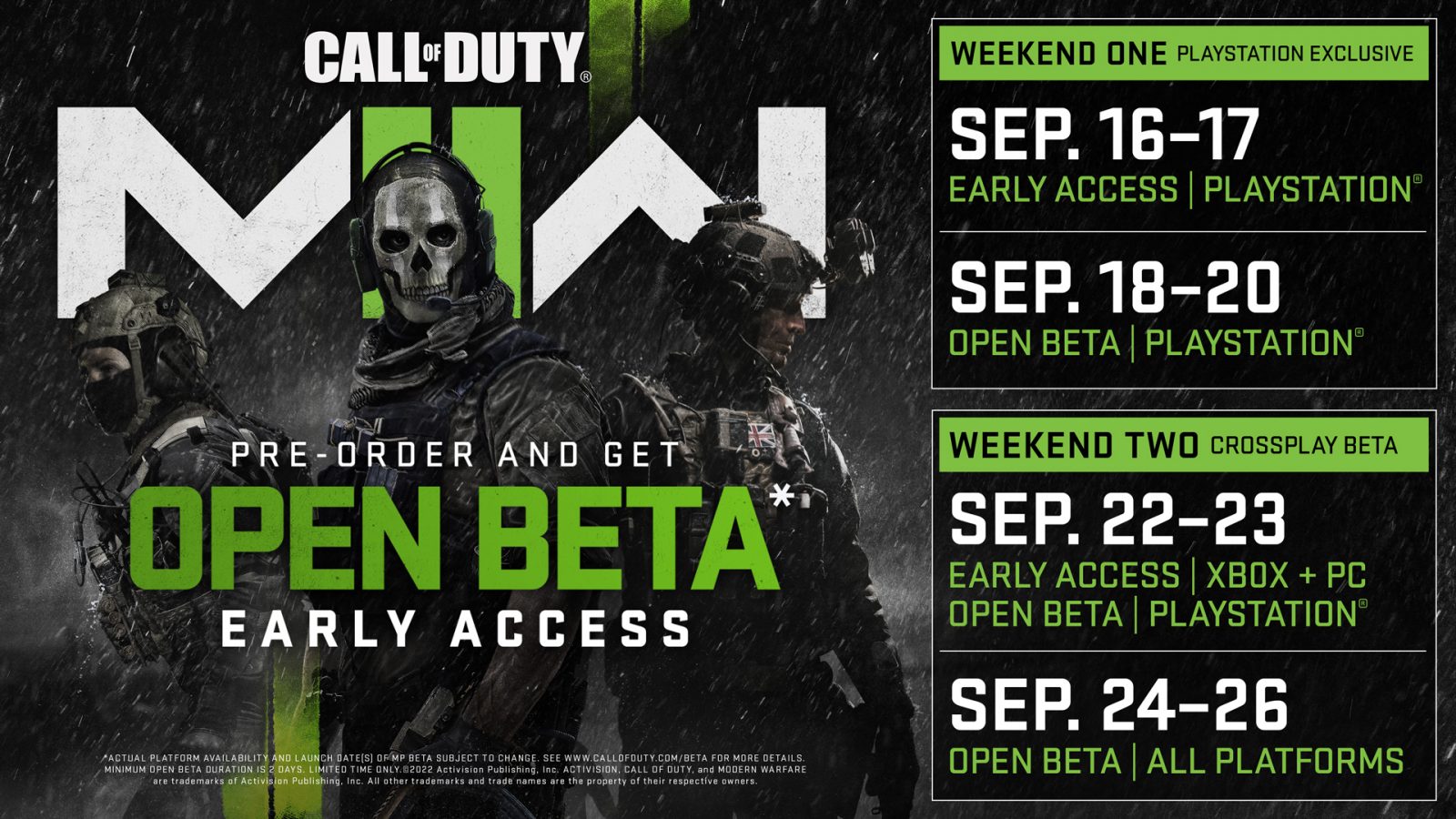 Ready to experience the future of Call of Duty Multiplayer combat before the launch of Modern Warfare II on October 28? Then prepare yourself for the Open Beta. The Modern Warfare II Open Beta will be free across all platforms, with players who preordered digitally, at retail, or received Beta codes gaining early access.

Note that Beta codes are tied to your Activision account, and are platform agnostic, meaning you can access the Beta on your hardware of choice.

The Modern Warfare II Beta is split into two playable Weekends, and early access is available for those with either digital or retail pre-orders:

Time to Play: Weekend One: First on PlayStation®(1)

PlayStation Early Access: Those who pre-ordered the game on PlayStation 4 or PlayStation 5, or received a Beta code, can begin playing the Beta on Friday September 16 at 10AM PT.

The second Beta weekend is available on all console platforms and PC, and is scheduled to run from Thursday, September 22 at 10AM PT to Monday, September 26. Crossplay will be active allowing you to party up with friends and the greater community, no matter what hardware they play on.

Xbox and PC Early Access: Those who pre-ordered the game for Xbox One, Xbox Series X|S, or pre-purchased for PC via Blizzard Battle.net or Steam, can begin playing the Beta on Thursday, September 22 at 10AM PT. Xbox Live Gold is required for Xbox players, and PC players are required to have a Battle.net or Steam account.

Xbox and PC Open Beta: The rest of the weekend, from Saturday, September 24 at 10AM PT to Monday, September 26, is accessible to Xbox and PC players regardless of pre-order status. The entire community can now experience the impressive amount of Beta content available in Modern Warfare II, unlock rewards available in-game at launch, and play together.

The Modern Warfare II Beta is set to feature a robust multiplayer experience going beyond the Core 6v6 experience with a variety of meticulously designed maps of various sizes, and an equally impressive set of Modes, Progression experiences, and other aspects that will be more thoroughly revealed at Call of Duty: Next. In addition, at Champs we revealed a flythrough of Marina Bay Grand Prix, where combat occurs within the main infield of an urban race circuit, one of the 6v6 Multiplayer maps confirmed for the Beta. With a number of in-game rewards available for simply playing the Beta (that are available at the launch of MWII if you own the game), and a host of other innovations and surprises, expect an unparalleled intel drop at the Next event.

In addition to a variety of in-game rewards, players who pre-ordered the Vault Edition of Modern Warfare II will be able to utilize the following rewards during the Beta:

All four of the Red Team 141 Operators – Ghost, Farah, Price, and Soap – each wearing a special masked outfit. 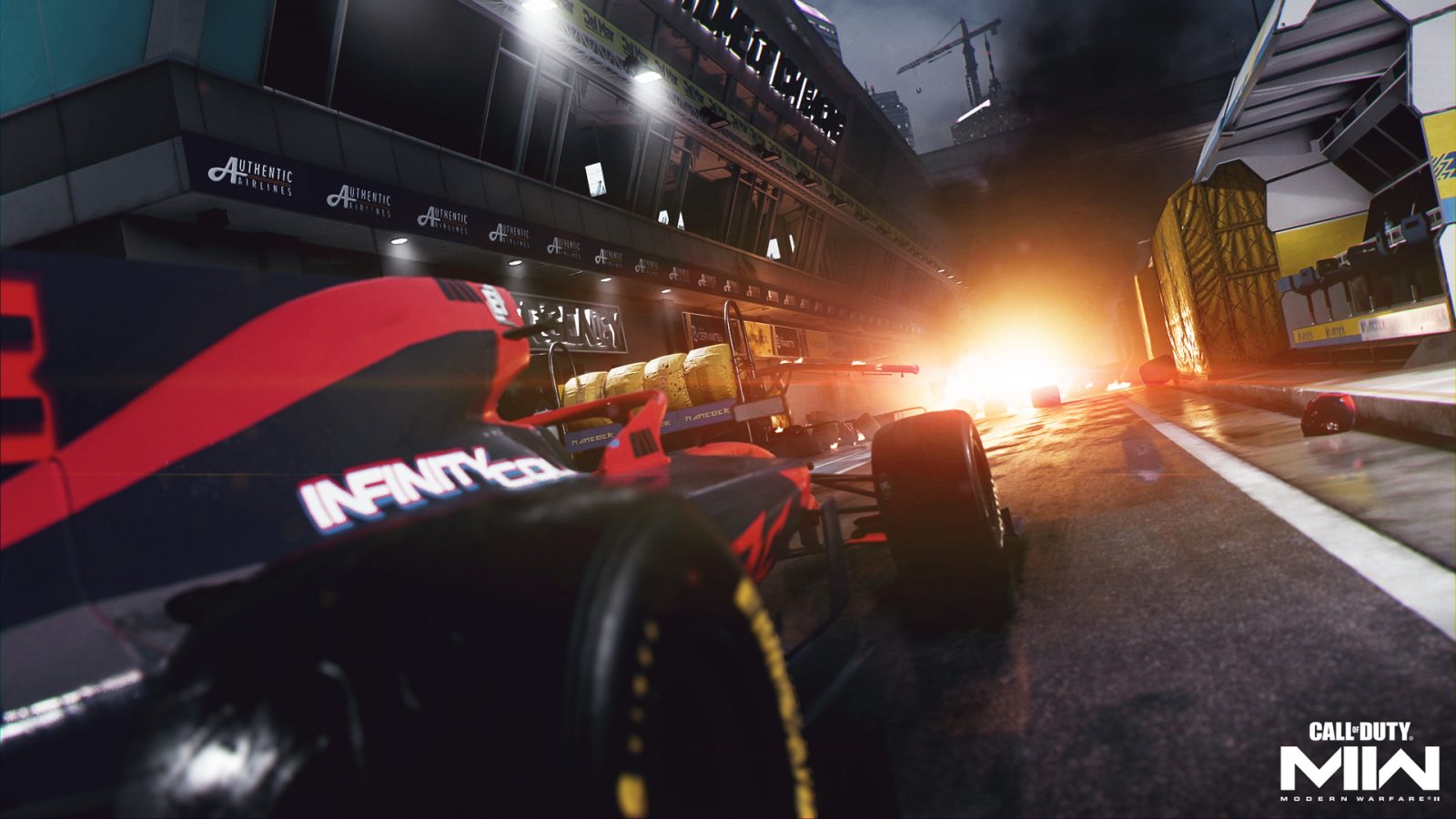 Between now and the Next event, Modern Warfare II lead developers Infinity Ward is set to pull back the curtain on aspects of developing the game, giving you unprecedented behind-the-scenes access to the innovations coming to the game. These series of intel drops will appear on IW’s Studio Channels with the first episode dropping soon. Be sure to follow Infinity Ward on Twitter, and check the Call of Duty Blog and Infinity Ward blog for more information. 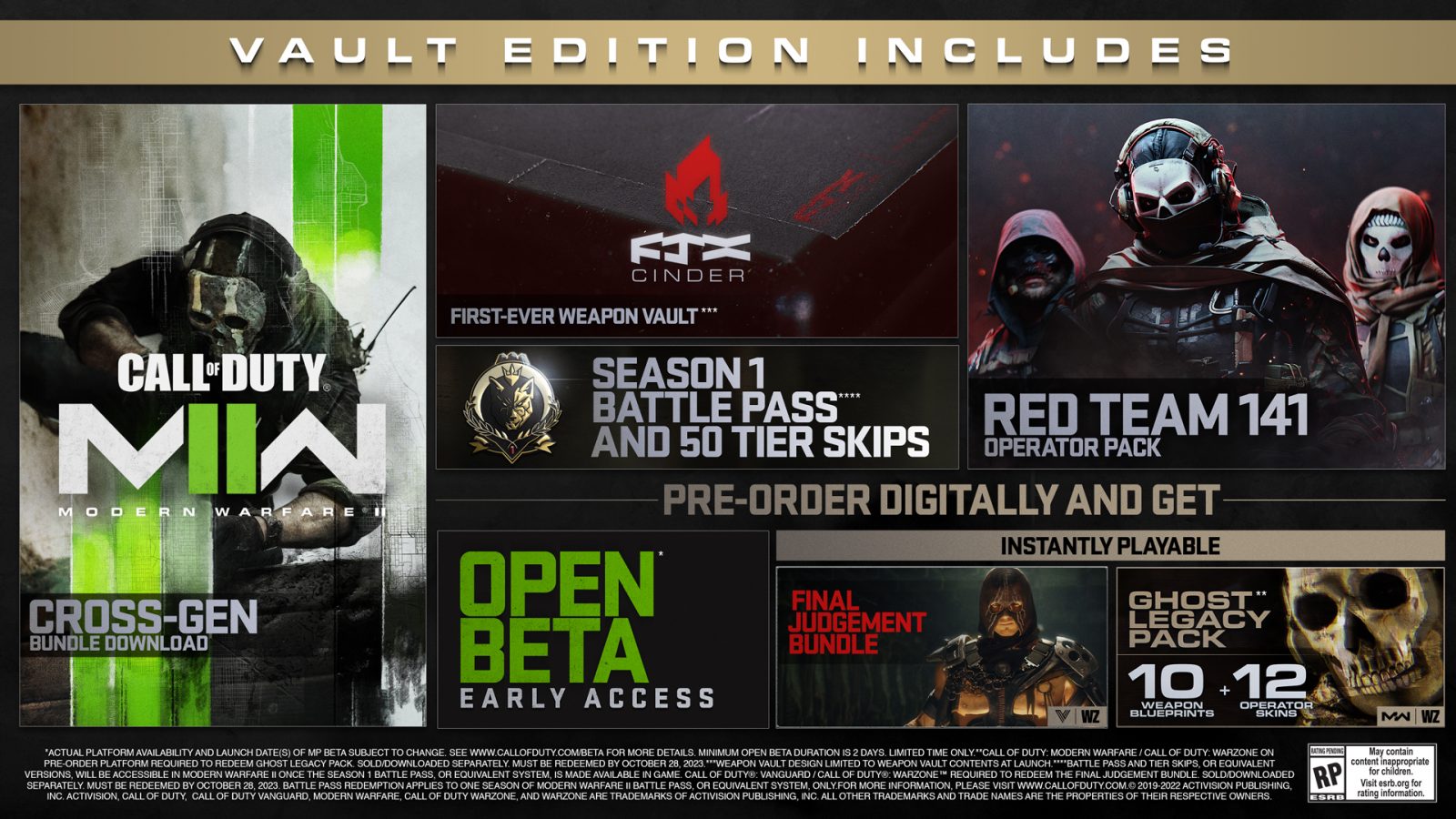 As well as gaining early access to the Modern Warfare II Open Beta on your platform of choice, there’s free content you can use right now in Call of Duty®: Vanguard and Warzone™, as well as content available in Modern Warfare II at launch, just for pre-ordering the game. For a full run-down, check out this blog. Here’s a quick list of what you can claim:

Final Judgement Bundle(4): Immediate access to the Legendary “Deathknell” Operator Skin and the Legendary “Bloodthirsty” Weapon Blueprint for use in Call of Duty: Vanguard and Warzone.

Pre-order the Vault Edition of Modern Warfare II to receive:

Red Team 141: Four playable Multiplayer Operators – Ghost, Farah, Price, and Soap – each wearing a special masked outfit, which will be available during the Open Beta

FJX Cinder Weapon Vault(5): We plan to share more details on this and the new Gunsmith at Call of Duty: Next, which will also be available during the Open Beta.