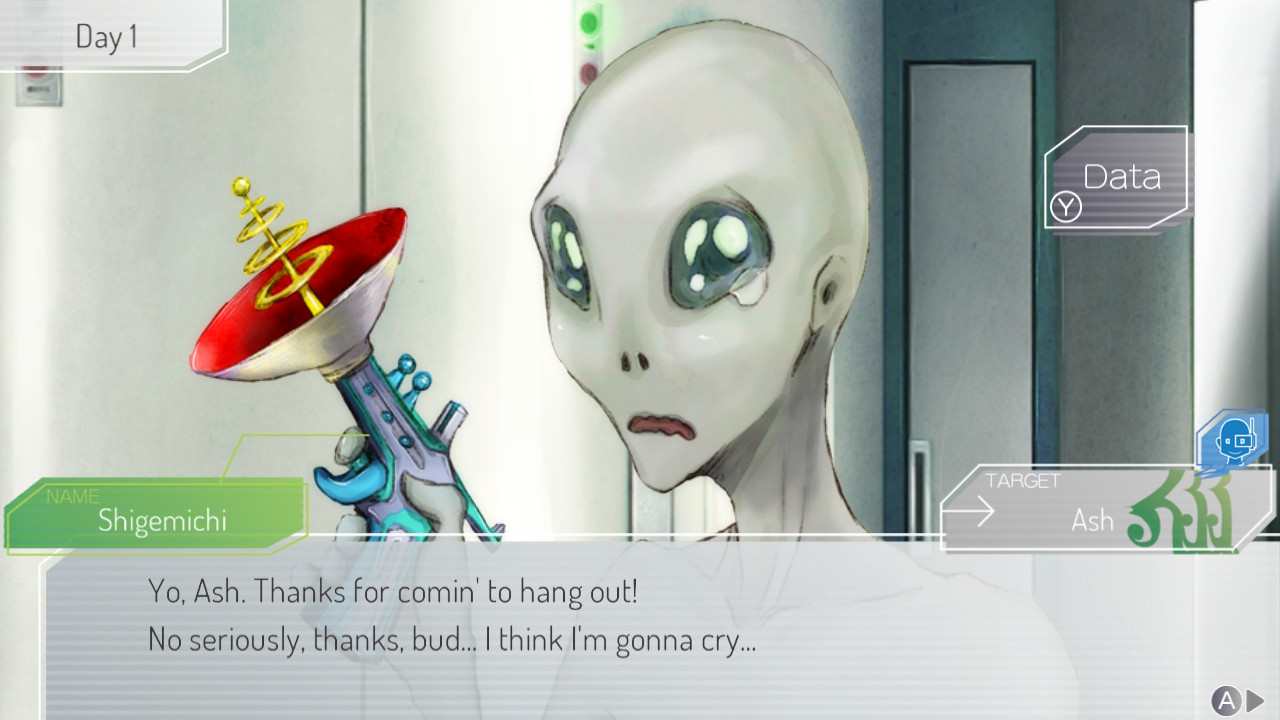 I’m so happy that the social deduction genre is getting its day in the sun. We’ve had games like Mafia and Werewolf out for ages, and even minigames like the Jackbox Party Pack 6’s Push the Button have made the “find the enemy” goal accessible to all. Of course, Among Us has propelled the art of deception onto the gaming scene, but one big flaw with the game is that it’s not fun when playing with complete strangers or with a smaller player count. What if I want to live out my fantasies of sussing out my monstrous companions all on my lonesome? Thankfully, Gnosia fills that need quite well, with a stellar gameplay loop (which actually involves loops!), an eclectic cast of characters, and a mystery that’s slowly unveiled as you live, die, and repeat. 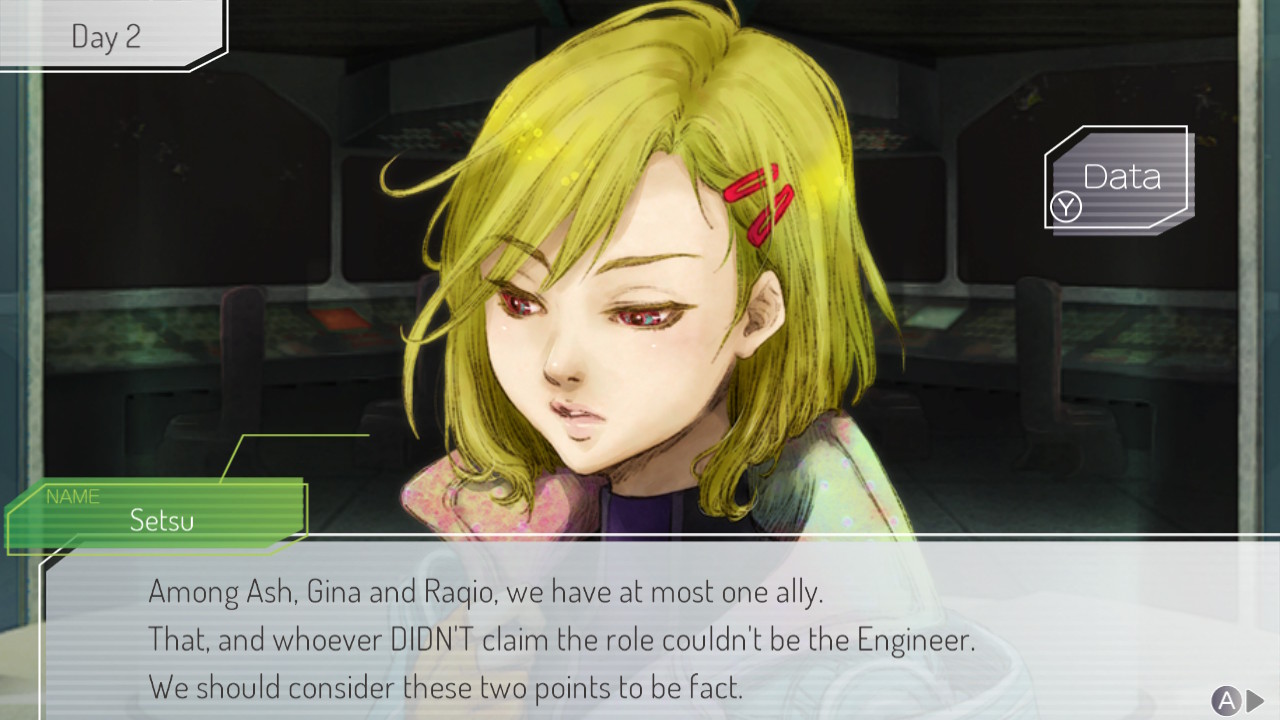 Gnosia puts you into the fray as you’re thrust headlong into the conflict: there is a human infected by the Gnosia, and will do their best to kill you and the rest of your crew if you don’t find out who it is. Guided by the computer system LeVi, you have to talk it out and decide who will go into cold sleep, that is, a cryogenic death. Usually, one person ends up sentenced to death by majority rule (though this can change during a trial). However, even if you do end up surviving the trial, humans can be targeted by Gnosia during the night phase, and if you die, it’s game over for the round.

I said for the round, because regardless of whether you win or lose, you’re granted the ability to go back and loop to a different setup, which means there’s no penalty for being brash with your actions. Every loop is randomized, which means your ally for one loop might be your enemy in the next, and you’ll need to investigate who’s on your side. To complicate matters even more, there are different roles also assigned randomly, which can help either the crew or Gnosia side. AC Followers, for instance, are humans that can win if the Gnosia do and therefore must stay alive with them in order to win. Engineers can determine once per night if a selected crewmate is crew or Gnosia, while the Bug will win if they aren’t eliminated by the time a faction victory is decided. 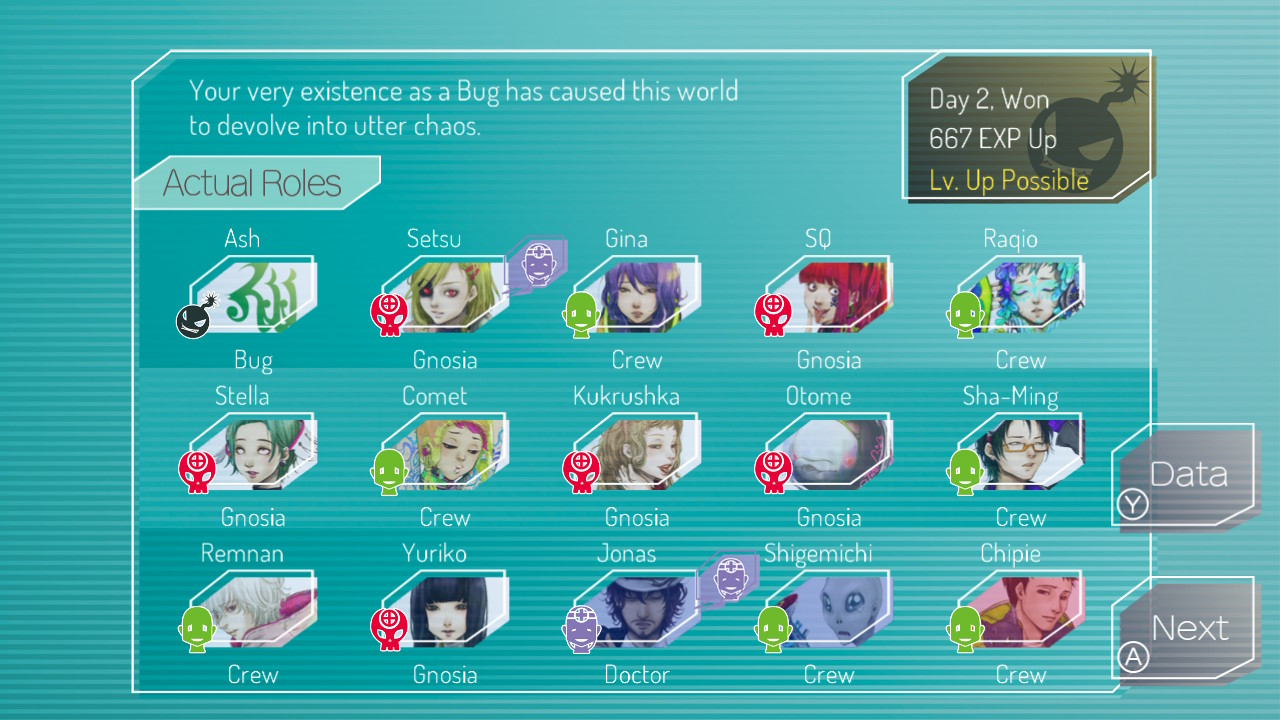 Those who’ve played Mafia or Werewolf (or even the game Raging Loop) will fit right in here. To add to the deception, you can claim to be a role whenever you want, but because multiple people can do this simultaneously, you’ll need to be careful about when you do this. Having a strong role such as Guardian Angel (who can protect one person a night except yourself) can put a target on your back if you claim early, and lying about a role without backing it up will cause trouble down the road. There’s a lovely balance of what to do and the choices you can make, which is impressive because the AI works so well here. They can make their own accusations and even accuse you of being a Gnosia; talk too much without backing it up and you will get the short end of the voting stick. If you keep quiet for too long, however, you’ll attract the ire of your crewmates and get eliminated. 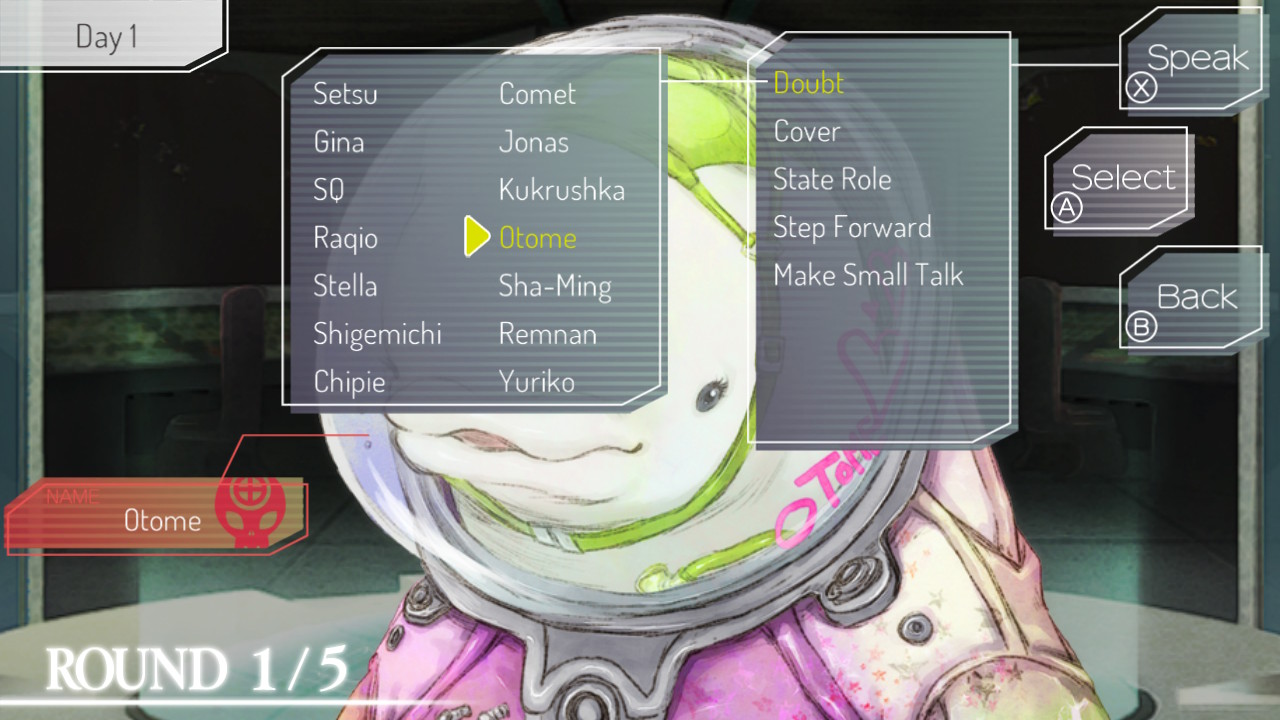 I’m just gonna send people this screenshot with no context and see how they react.

While you might end up dying through no fault of your own initially, you’ll be able to level up in between loops and improve your skill set. You have a list of six different traits, each with a different advantage: charisma, intuition, logic, charm, performance, and stealth. If you have an issue with getting killed during the night phase, you can upgrade your charm to make sure you won’t get killed in your sleep. On the flip side, if you need to lie about your allegiance, increasing stealth will make you less suspicious to the group. Want to know if a crewmate isn’t telling the truth? Intuition will increase the possibility that you’ll find out if they’re lying during a statement.

It also helps that the cast of characters is as diverse and unique as the game itself. You know those traits you have when playing the game? Well, everyone else has those as well, which makes the dynamic for trials interesting. Each character has their own personality and habits, which can make or break a loop depending on with whom you’re teamed up. Raqio is a flamboyant yet adamant accuser with high logic, yet can easily be accused if you play your cards right. Likewise, my personal favorite Shigemichi has very high charisma… but has the unfortunate distinction of looking like a traditional alien, which means he’s usually the first to go in a loop. Sha-Ming, on the other hand, is a smooth talker and can convince the crew to turn on someone at a moment’s notice… pray he doesn’t pick you. That said, he’s also a very uncooperative teammate, which makes him unreliable yet a good way to mix up the game. The only other person you know who has memory of the repeating loops is Setsu, who is basically this game’s equivalent to Danganronpa’s Kirigiri. Each of these 14 characters have a great backstory that you must uncover in order to find out the true ending of the game. 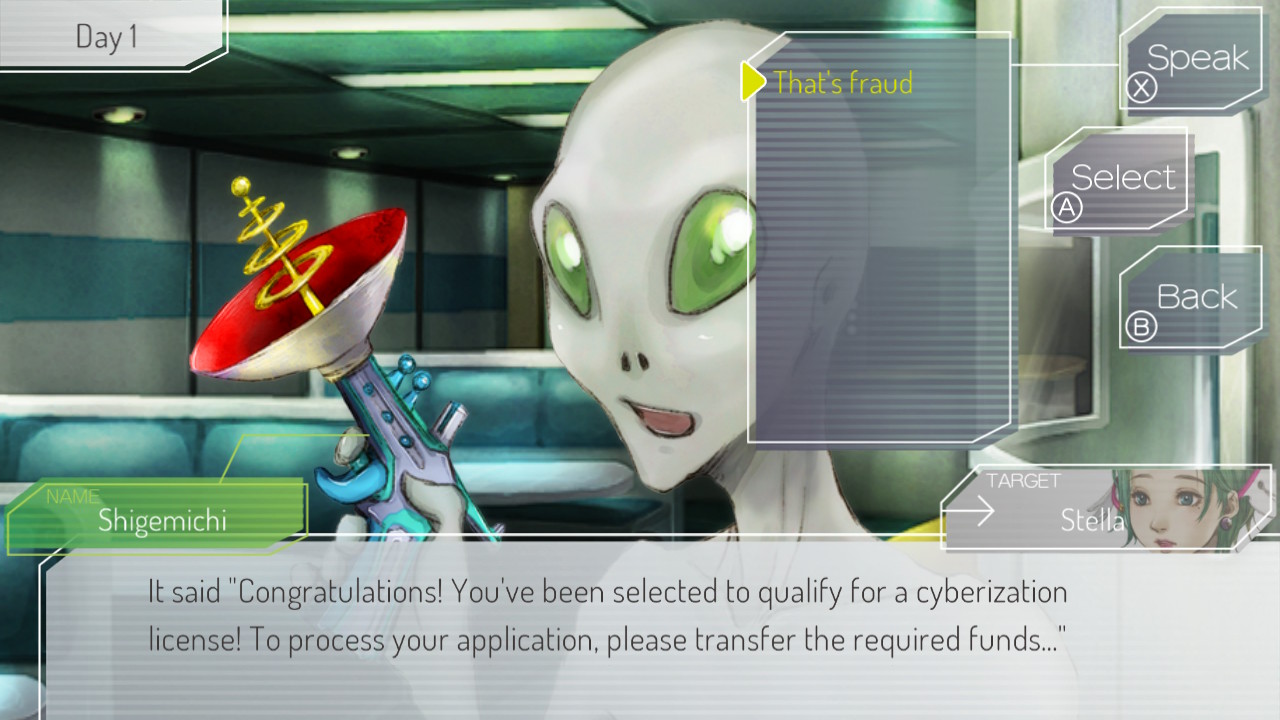 PROTECT HIM AT ALL COSTS.

It’s a good thing that they all have intriguing personalities, because you’ll need to play through dozens (if not hundreds) of loops in order to experience everything going on. There are some setups which will trigger different events that your log will record; a character might have an evil ending if you can survive to the end of a loop with them as a Gnosia. Others might have some breaktime social events that will reveal more about their personality (and also a key as to how they will behave), with different characters liking or hating each other. 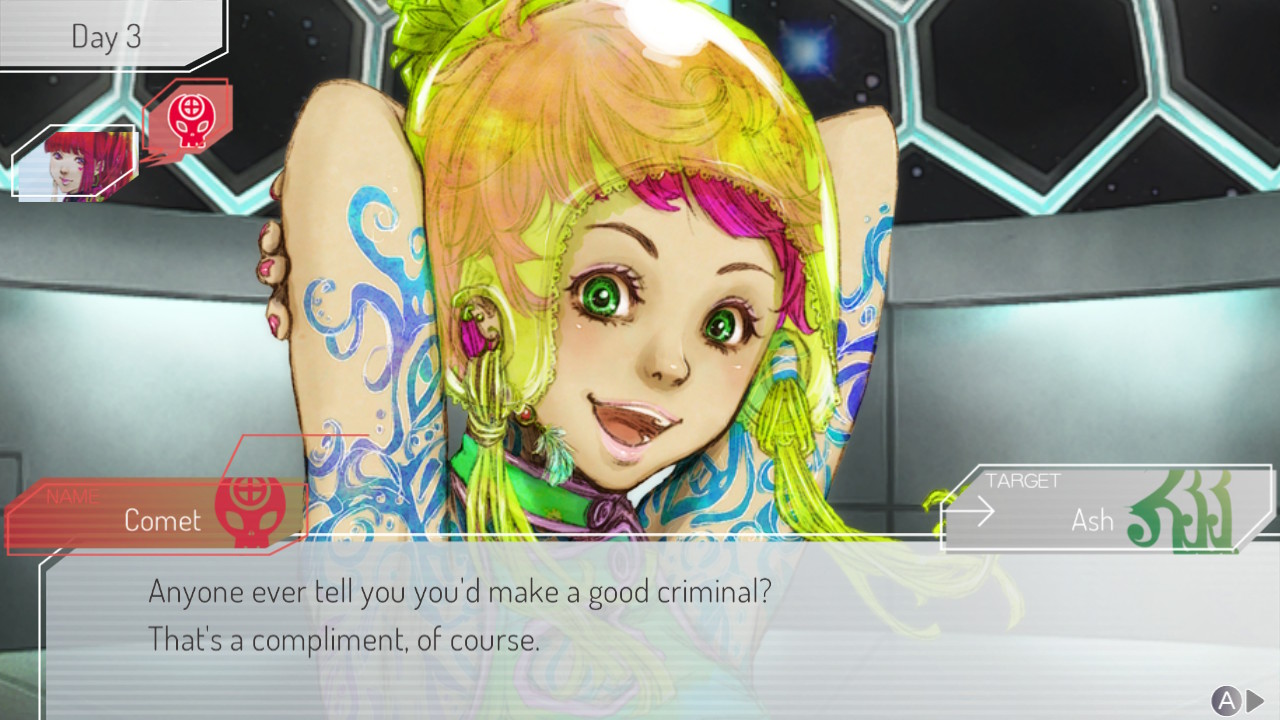 Because each loop that doesn’t have the full cast of 15 will be randomized, the relationship dynamics might be different in a group of 5 or 12. Setsu and Sha-Ming detest each other, for example, and having a loop with them will lead to some interesting conversations. Some events only trigger if you’re a crewmate, special role, or Gnosia, so you’ll want to experiment with the beginning round setup if you want to delve into the story. This is probably the only bad part about Gnosia, as there’s a ton of trial and error going on here, especially during the late game grind. As some events only occur when a certain character survives a loop, having them die in a trial means you’ll have to start over. However, you don’t really know how to make this happen (though there’s an Event Search that will select parameters which will make an event more likely to trigger), and characters are randomized every loop. That means, if you only need one or two more scenes for a specific character, be prepared to reroll your setups and hope that you can keep them alive. 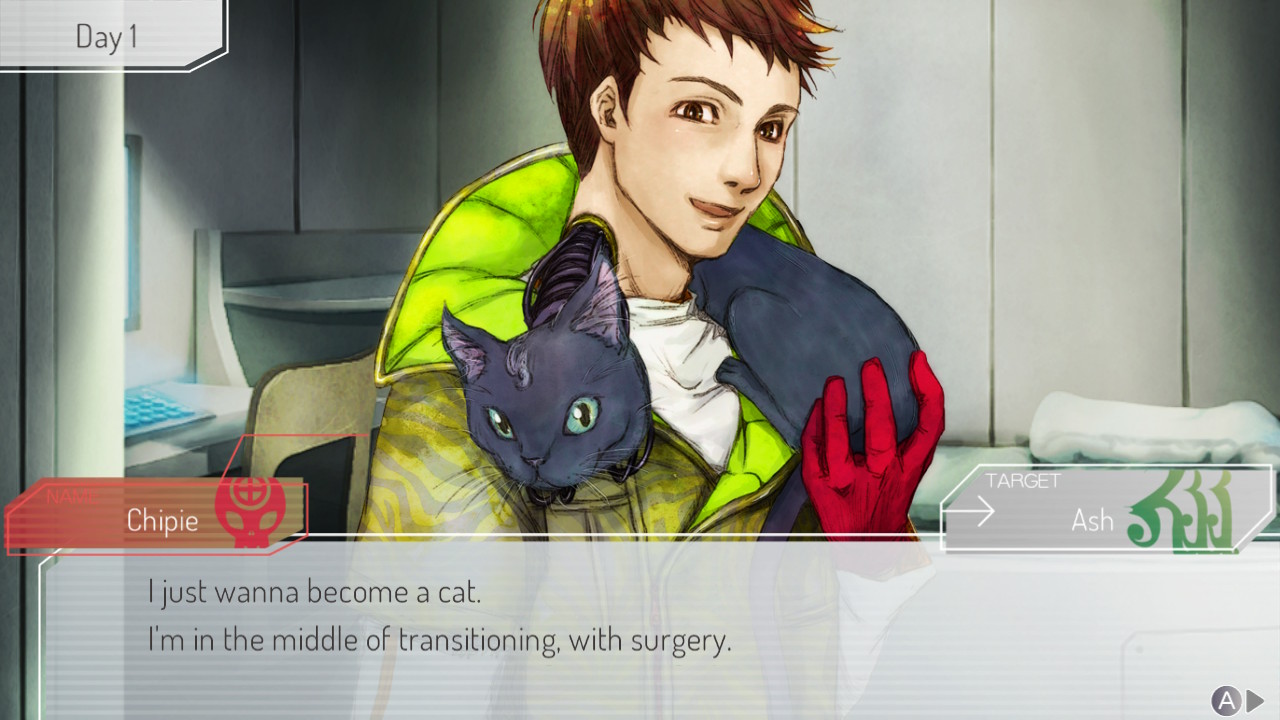 It’s the best boy fused with a best boy.

In terms of presentation, the game sports a snazzy anime visual novel style with a variety of different character sprite portraits. They look wonderful and there’s a ton of them per character, which means there are plenty of interactions that can occur here. Each character also has a few evil portraits for when they’re Gnosia, which causes a sense of discomfort and is some great attention to detail. While the game has no voice acting (presumably because a lot of the lines within the trials are reused a ton), the personalities of each character are written remarkably well, and I didn’t feel like that detracted from the experience. Overall, this is an amazing game that everyone should play, even if you haven’t gotten into the social deduction genre just yet.

Whether you’re playing for 20 minutes or 2 hours at a time, Gnosia is the perfect single-player experience for those that want a unique spin on the social deduction genre. With a loveable cast, an innovative investigation system, and tons of replay value thanks to the premise, this is one game you’ll want (and have to) play again and again.

Elisha Deogracias is an aspiring accountant by day, freelance writer by night. Before writing for Gaming Trend, he had a small gig on the now defunct Examiner. When not being a third wheel with his best friends on dates or yearning for some closure on Pushing Daisies, he's busy catching up on shonen manga and wacky rhythm games. Mains R.O.B. in Smash. Still doesn't know if he's a kid or a squid.
Related Articles: Gnosia, Indies
Share
Tweet
Share
Submit