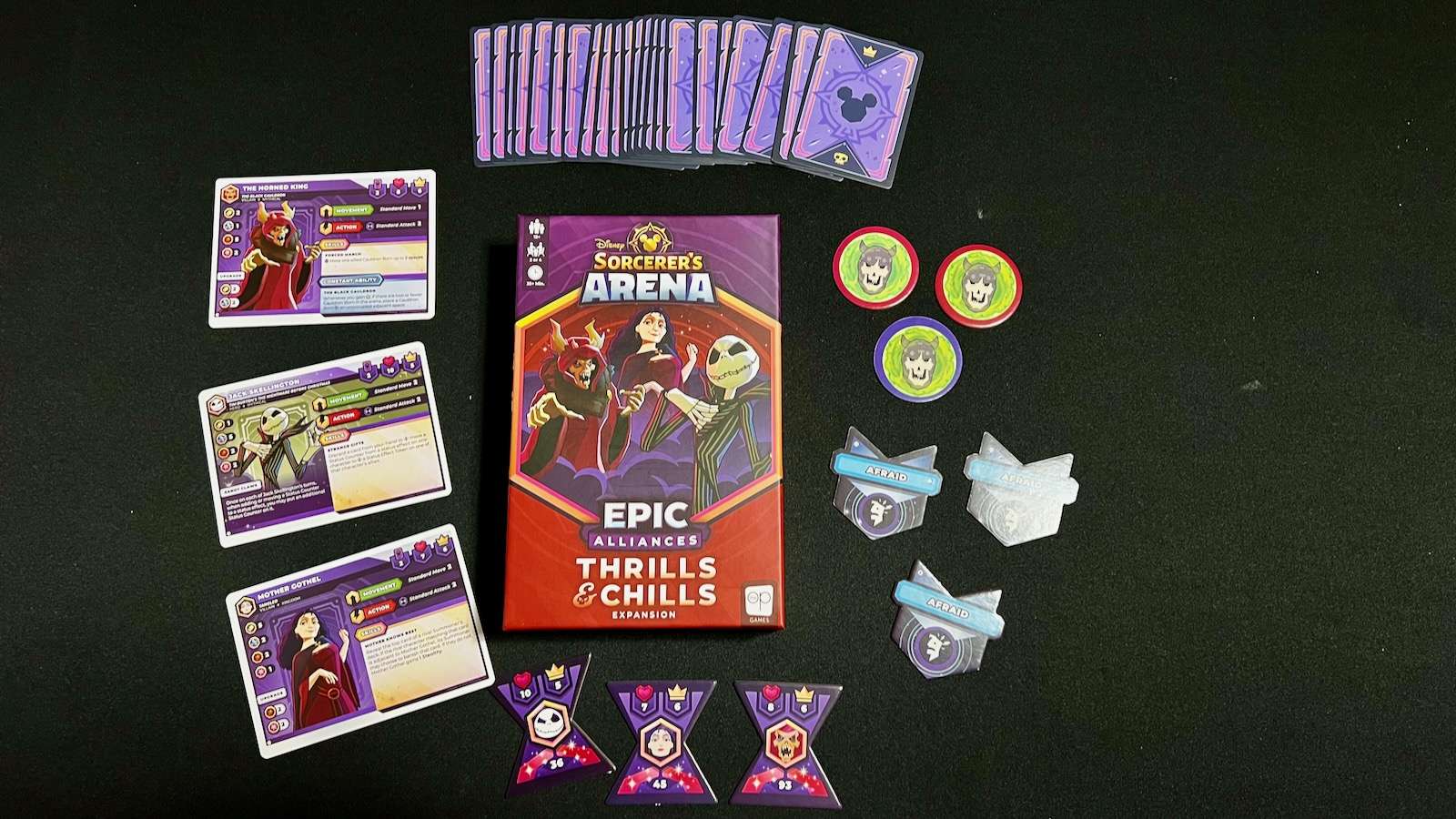 When the original Sorcerer’s Arena came to the table, I was already a fan. Not only am I a big fan of Disney, but I’m also a big fan of games that I can get to the table and get gamers with different levels of experience involved. I also love games that can integrate new features and characters seamlessly, without changing the gameplay significantly. The Thrills and Chills expansion for Sorcerer’s Arena hits that sweet spot. 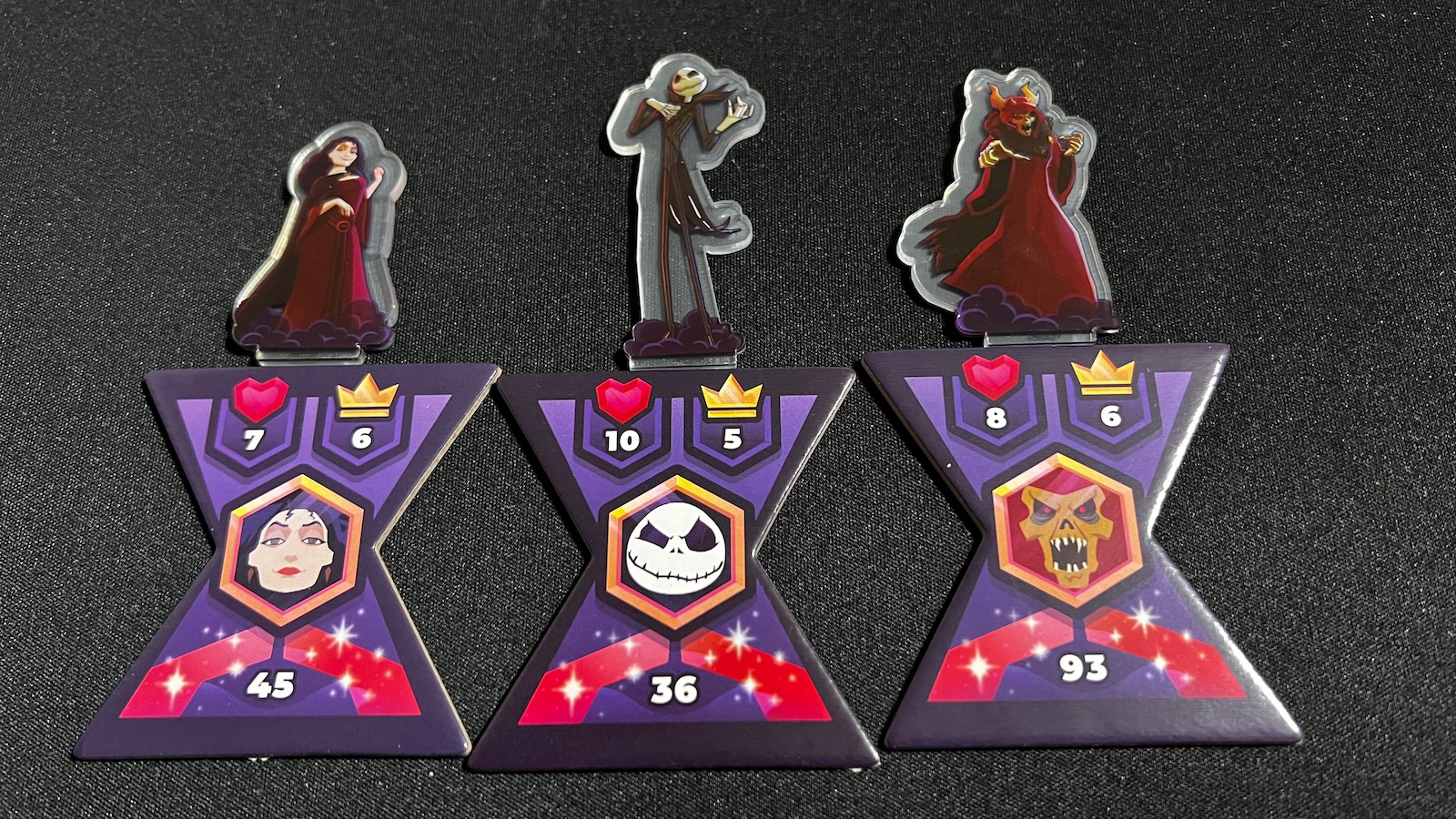 Sorcerer’s Arena, from publisher the OP games, is a 2 or 4 player game where teams of magic users from the Disney universe are battling each other to gain supremacy. Throughout the game, characters use different abilities from special decks, navigate player conditions, and try to gain enough points to meet their win condition before the other team. You can check out an overview and review of the core game here.

In the second expansion for Sorcerer’s Arena, Thrills and Chills, players are introduced to a few new characters, some new abilities, and some new character tokens. 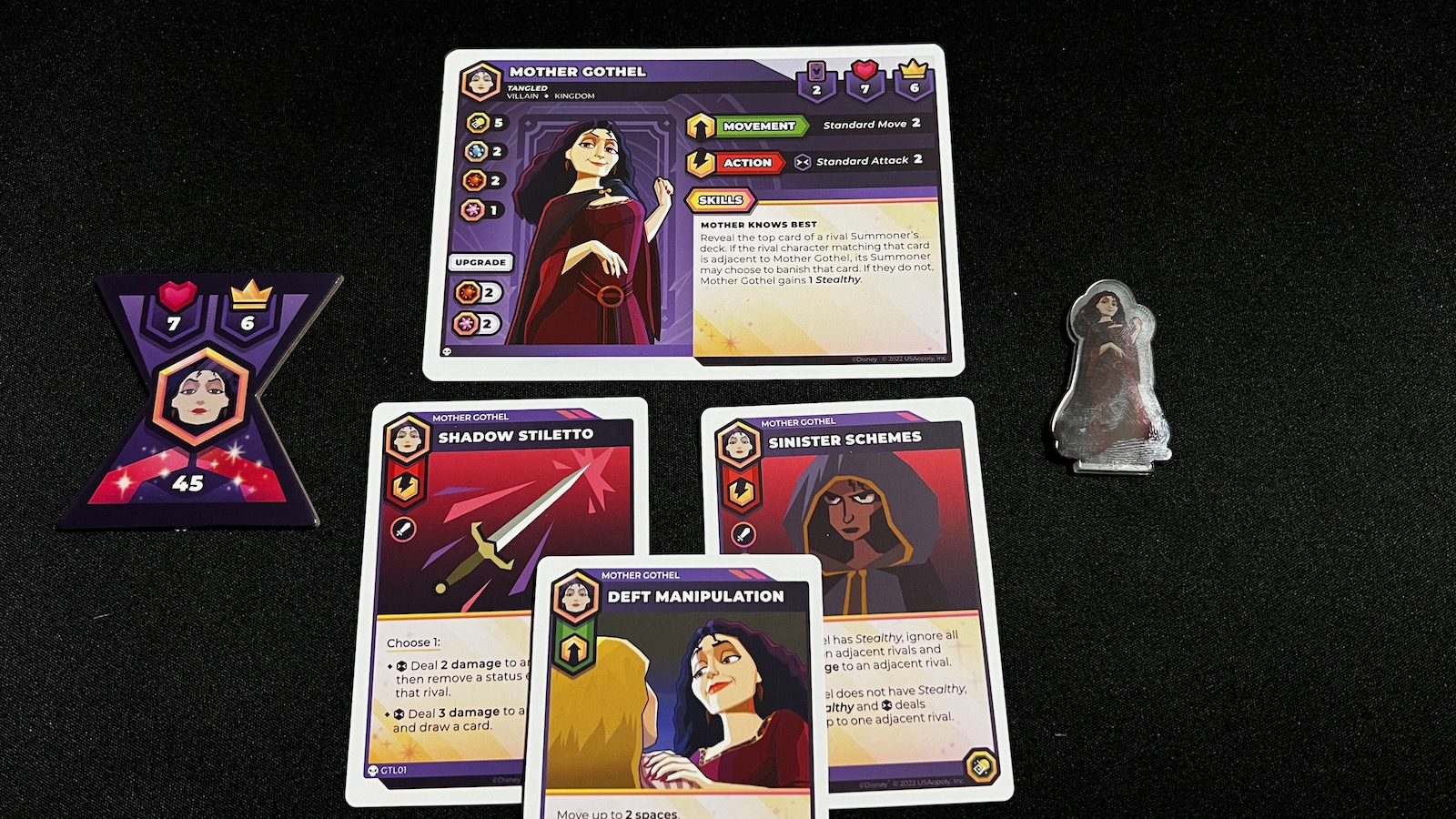 Mother Gothel makes her appearance from the movie Tangled and does a lot of her work in the shadows. Most of her abilities rely on moving in the shadows with the stealthy ability and attacking people with their guard down, regardless of abilities. 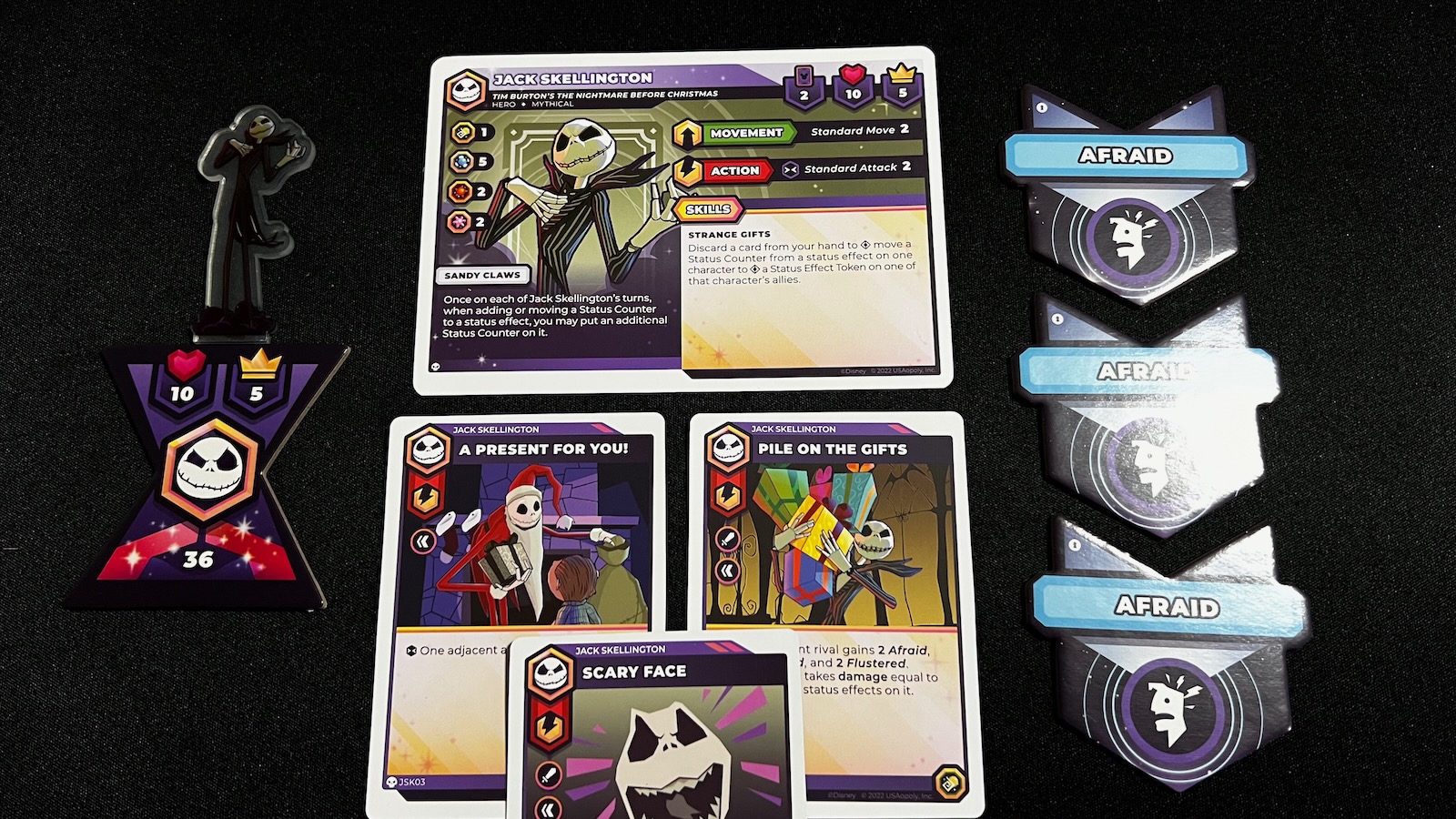 Jack Skellington from The Nightmare Before Christmas brings “gifts” to his allies and rivals in the form of statuses that can be harmful or beneficial. One of the new statuses in the game is Afraid. The Afraid status is a constant effect that requires a character to use each of its movement phases if possible. If a character ends movement adjacent to a rival sorcerer, they gain 2 damage. 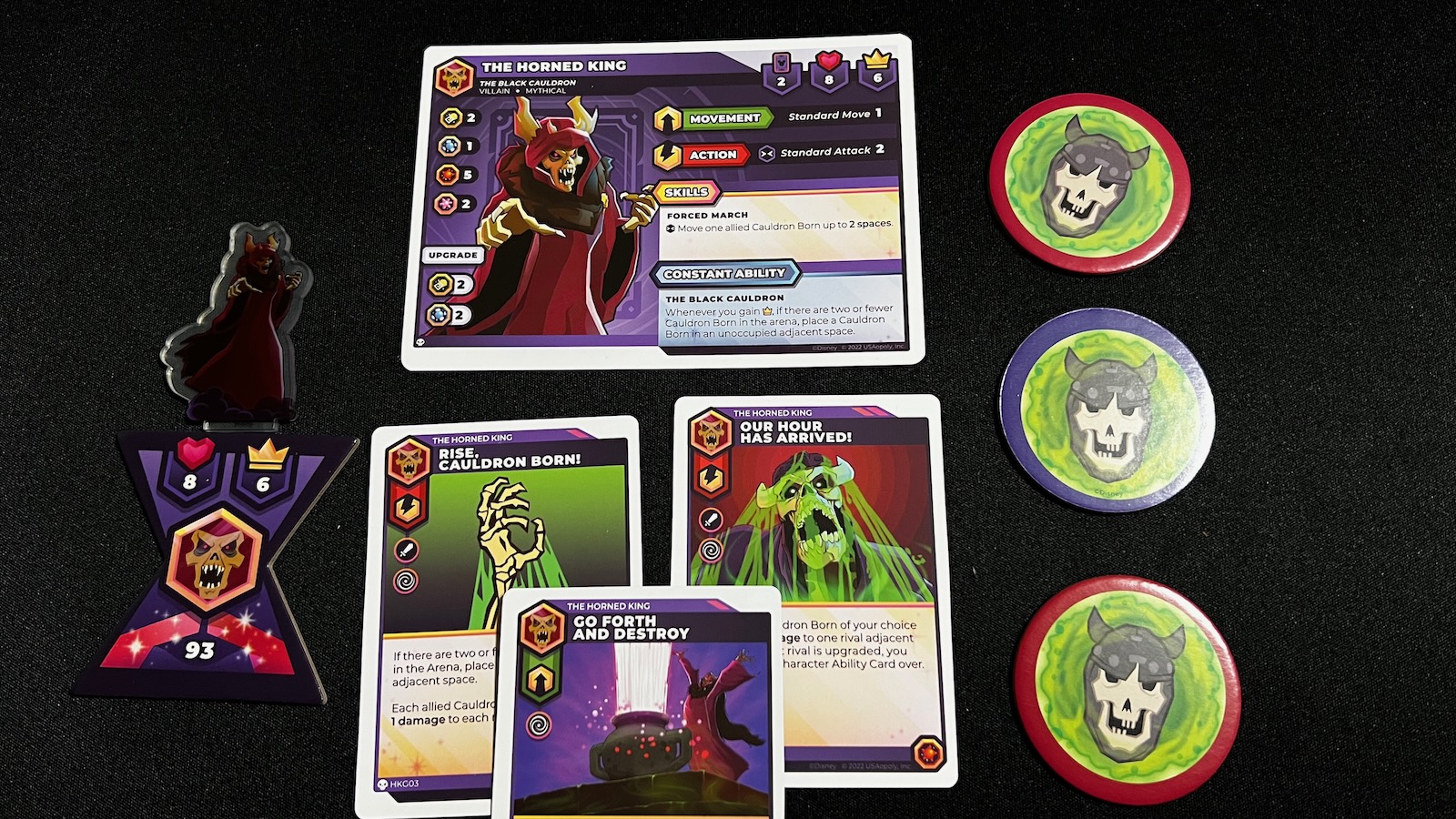 The final new character is The Horned King from the often overlooked 80’s movie, The Black Cauldron. The Horned King adds two new features to the game. The first is a Character Token in the form of Cauldron Born. The Cauldron Born are undead soldiers that the Horned King can manipulate with his deck of cards to deal damage and harass the other players. On their own, the Cauldron Born have no abilities and can be taken out with 1 hit of damage. The constant ability feature introduced in the first expansion makes its return with the Horned King. The Horned King’s ability allows the player to add a Cauldron Born to an adjacent space if there are none on the board when earning a victory point. 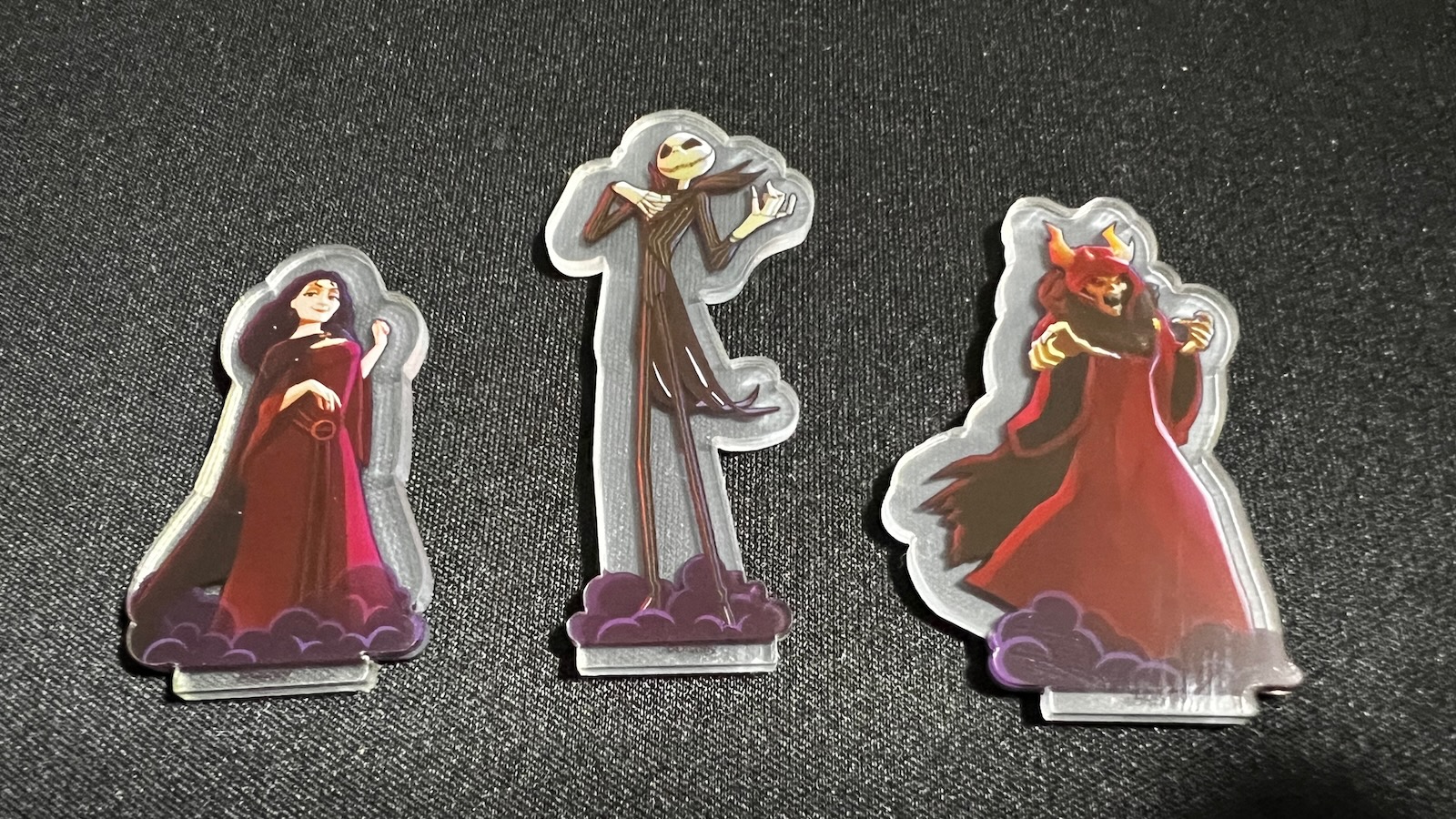 As with the first expansion, the trio of new characters can be thrown into a game as a team of their own or blended in with the base characters. Both offered some great combinations on the table. It was fun using Aladdin and Mother Gothel on the same team for an odd couple assassin team working in the shadows. The Horned King was a fun addition who felt like a puppet master sending out his minions to impose his will upon the other team with some big pops. One of the funniest lines from a game with Jack Skellington was, “stop giving me presents, worst Christmas ever!” The Afraid condition also caused some problems when a player couldn’t clear the status right away and characters kept moving towards danger. This bogged down their gameplay until the status cleared and frustrated the player on the receiving end.

The characters and new elements worked nicely into the already stellar gaming system and opened up a variety of new fun team combinations to try. The cards are still rather flimsy, but work well when sleeved and the choices in characters, while fun, are a bit obscure this go around. Many people will not be able to place Mother Gothel or the Horned King with Jack Skellington as the most well known property. Again, this game has a lot of great things going for it and a lot of room for expansion to come. This expansion, though, is a great addition to your collection.

A spooky expansion with some fun new elements and characters. A great pick up for fans of the base game.

Dan is a newly married educator from Colorado. Growing up as an Air Force dependent gained him lots of new perspectives on the world and a love for making new friends, especially over a good board game. When not at school or playing a board game, Dan is probably at the gym or a local sporting event. Dan loves heavy euros, adventure, and living card games.
Related Articles: Disney Sorcerer’s Arena: Epic Alliances, Disney Sorcerer’s Arena: Epic Alliances - Thrills and Chills Expansion, Tabletop
Share
Tweet
Share
Submit