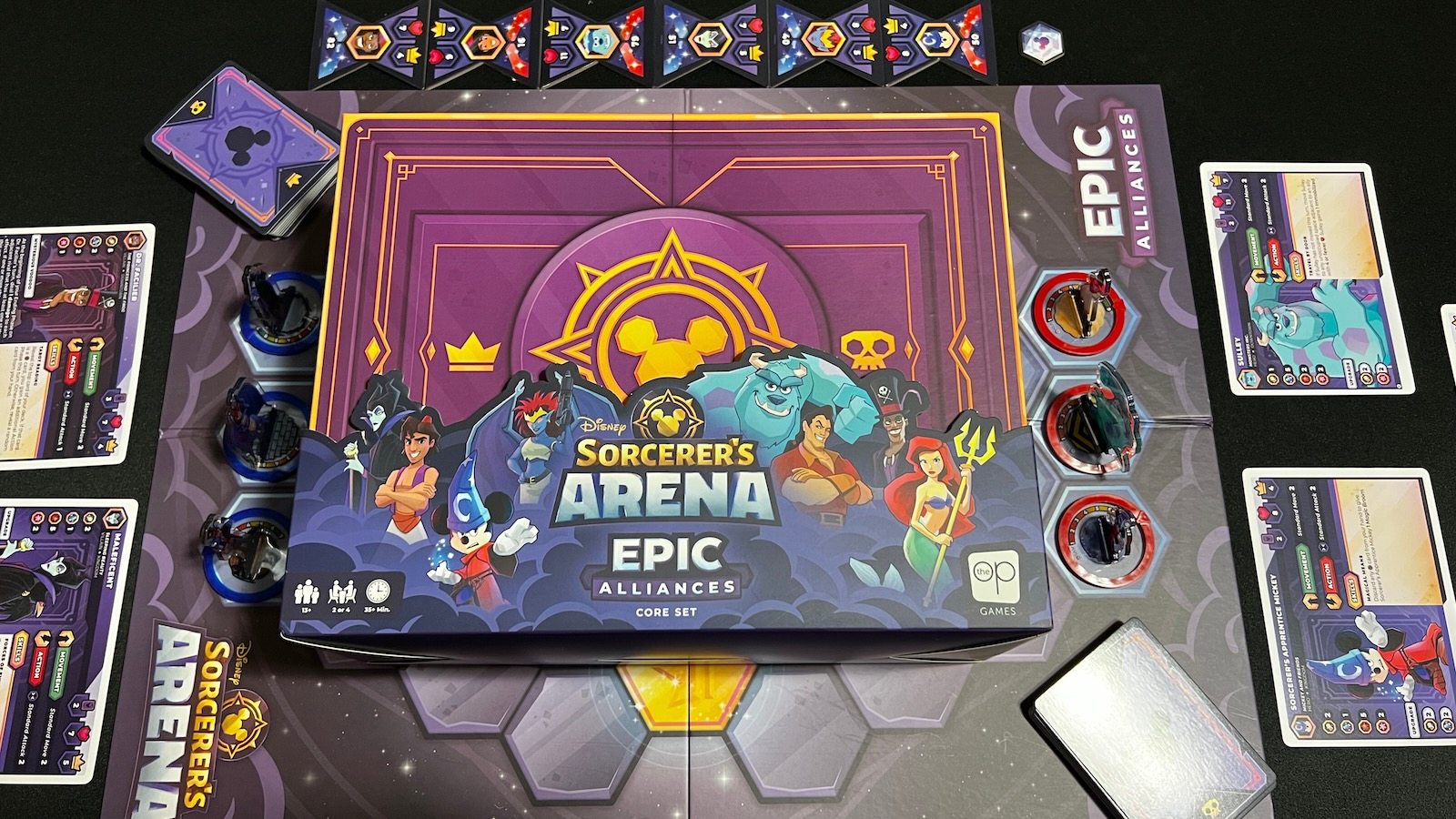 When I downloaded the Disney Sorcerers Arena app a few years ago, I had a ton of fun taking teams of Disney characters into battle against classic Disney villains. Since I wasn’t willing to buy into the pay to play model, my progress was slow and arduous, but the artwork and fun combos led to a great experience. The only thing better than the app… make it into a board game!

Disney Sorcerers Arena: Epic Alliances from designer Sean Fletcher and publisher The Op, takes the art and the theming from the smartphone app and expertly ports it into a tabletop experience for players of different ages and skill levels. Epic Alliances is a 2 or 4 player skirmish game pitting teams of 3 or 4 Disney and Pixar characters against one another. The game is truly built as a two player game, but has a special set of rules for a 4-player battle royale. Gameplay progresses over a series of rounds with players maneuvering their allies around the board and attacking their rivals’ pieces all in hopes of having the most victory points when one of the end game conditions is met. 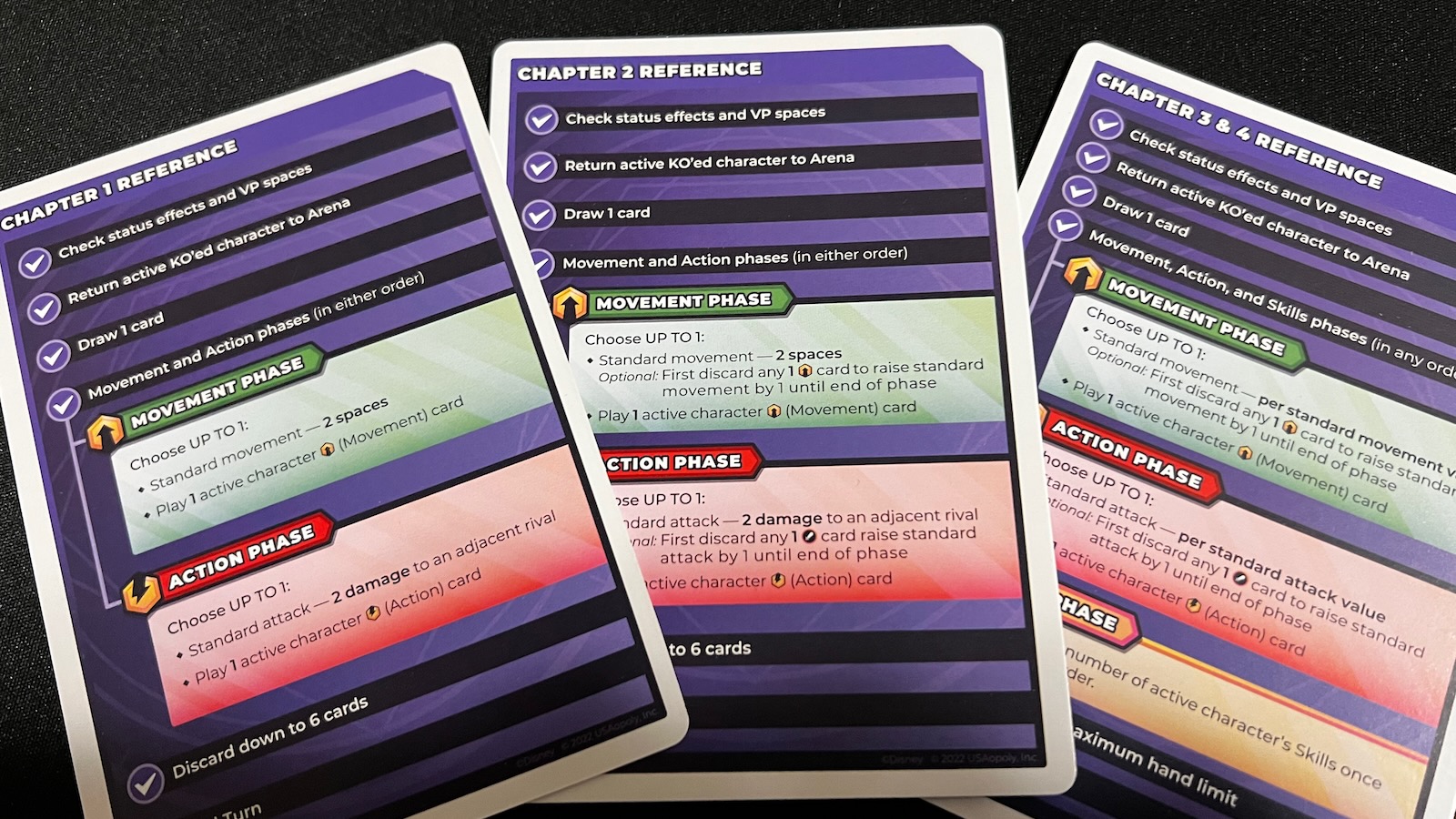 Right out of the gate, Epic Alliances helps ease players into the larger game with a progressive rulebook divided into four chapters. Chapter 1 sets players up with teams of preselected characters and takes players through the basics of the rules. Chapter 2 introduces a draft for players to decide which characters they will play with for the game. Chapter 3 introduces character ability cards that feature special skills unique to each character. Chapter 4 adds an element of upgrading characters using the cards in their discard pile. While this review will give a rundown of a full Chapter 4 game, the progressive introduction to the game gives players examples of how to scale the game to different levels of complexity for players of all ages. 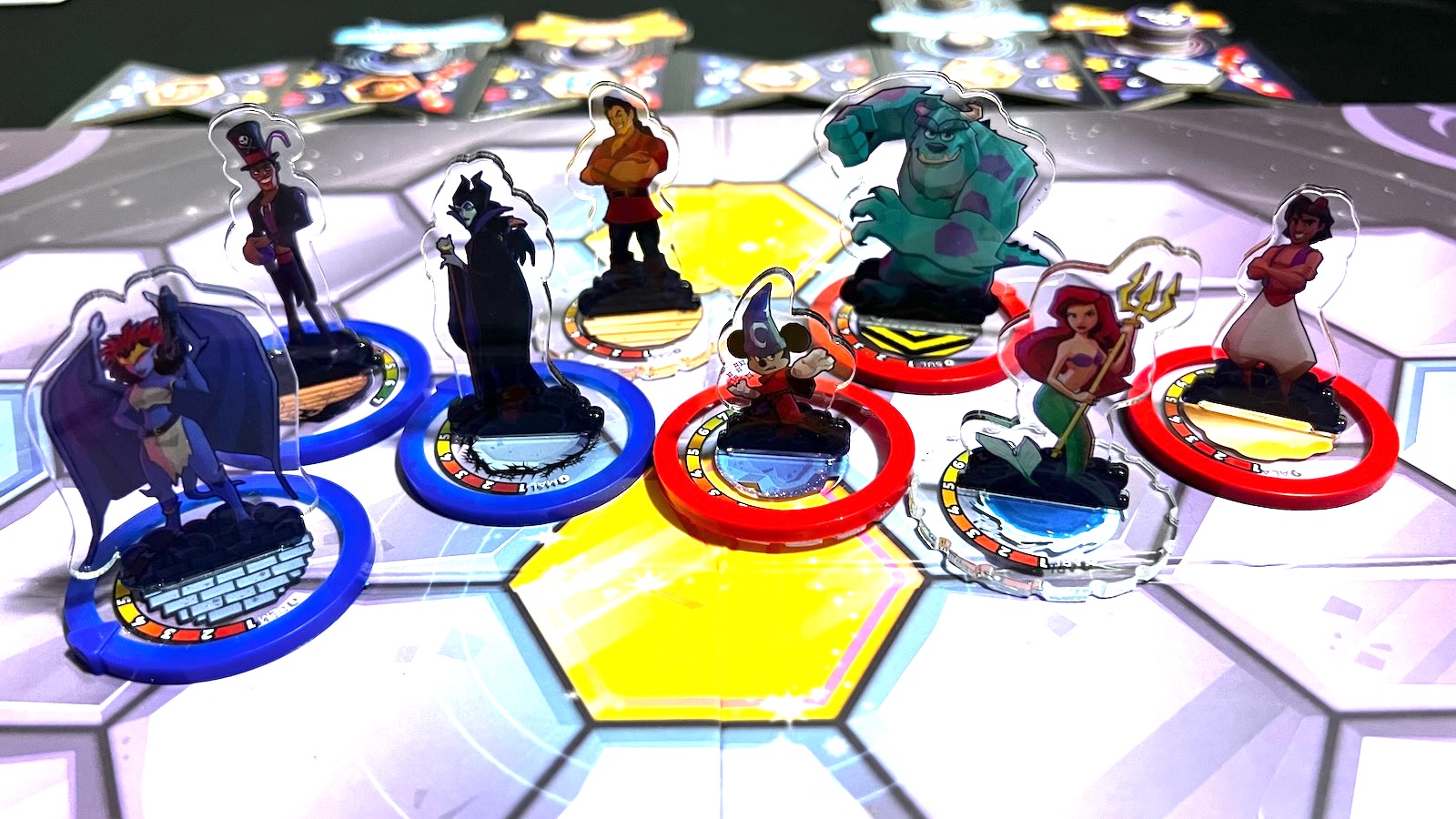 The base set of the game comes with eight characters from the Disney and Pixar universe to choose and battle with:

To set up a game, players, also referred to as summoners, will draft characters to their team of allies. In a two player game, each summoner will build a team of three, with four player games giving each player control of two characters. Players will collect the deck of cards and character sheets associated with their team. The cards are shuffled together into one large deck. Players will then determine which order they would like to play their characters in secret. Players will reveal their first character and a special initiative value will determine starting order. Players will place special character hourglass tiles to show the order of play for each round. Throughout the game, characters will gain statuses that will be tracked by special tokens and tiles displayed to the side of their hourglass tile. Each player will have a different hand size depending on the characters they chose and will draw a hand of cards. 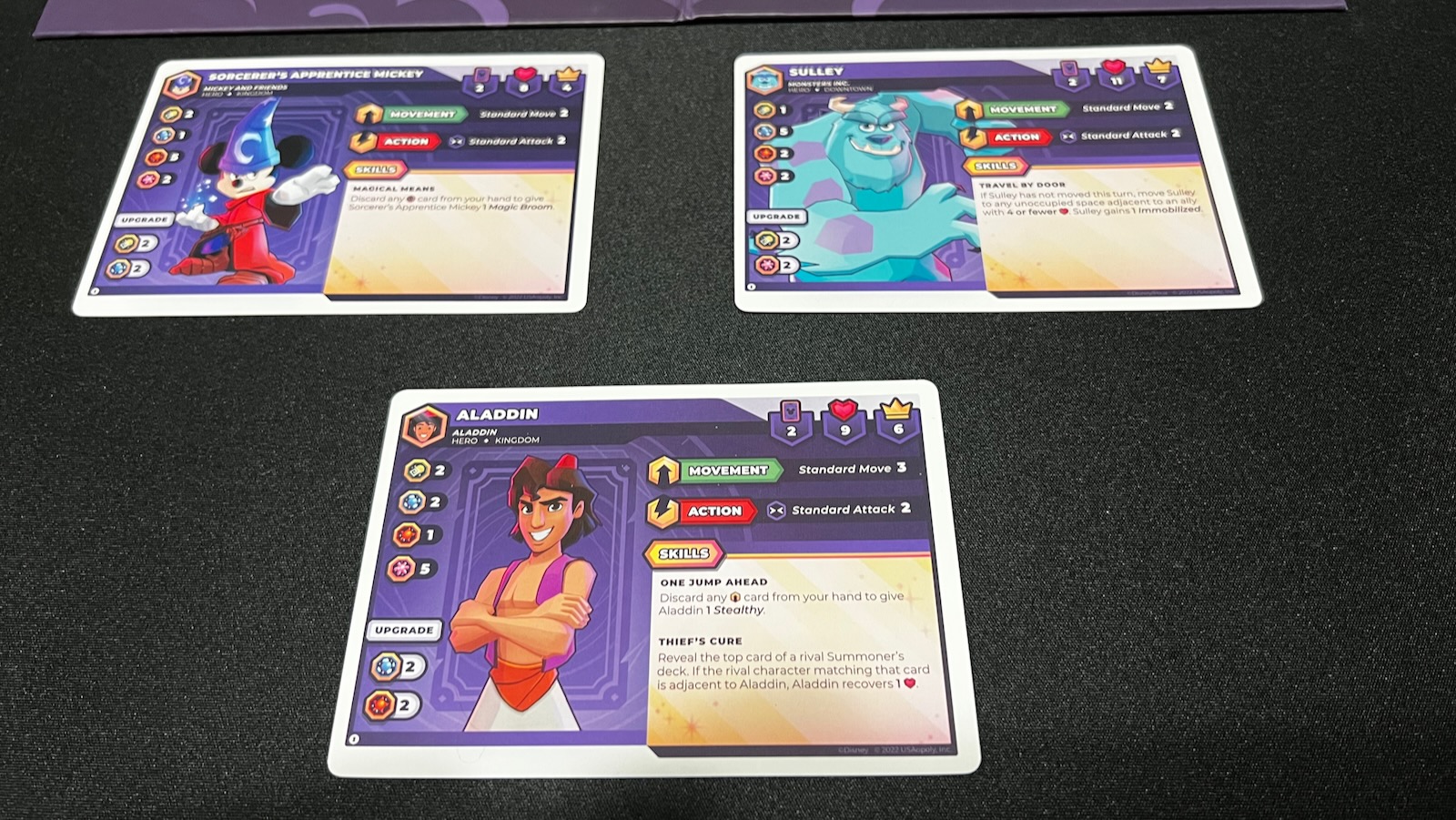 The cards in this game are where a lot of the flair comes out. Each character comes with a special set of movement and action cards tailored to their abilities and backstory from the Disney universe. Cards have a number of tags that can trigger abilities on character sheets and combo with other card abilities played each round. Cards also come with unique gear icons used to upgrade characters throughout the game. As cards are discarded, players keep track of these gears to create sets. Players can then banish these cards from the game to upgrade characters and add even more special abilities. 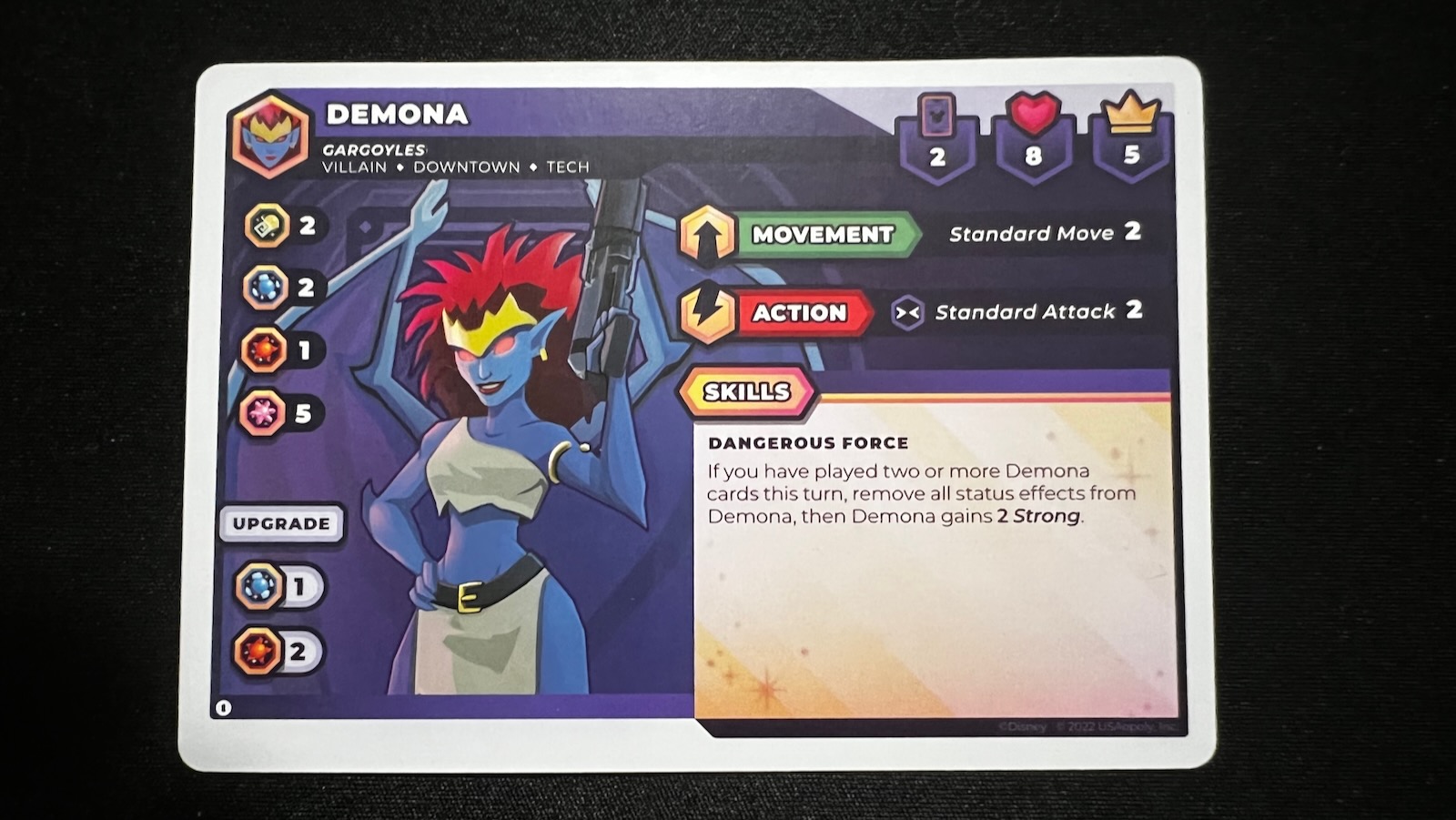 A player turn consists of a number of phases associated with the character they are controlling. In the Starting Phase, players will remove one status counter from each status token attached to their character. Statuses can be beneficial to characters, such as giving them extra attack strength or avoiding attacks from other players, or harmful, such as restricting movement or causing damage each time a token is removed. Once all markers are removed from a status token, the status is removed. 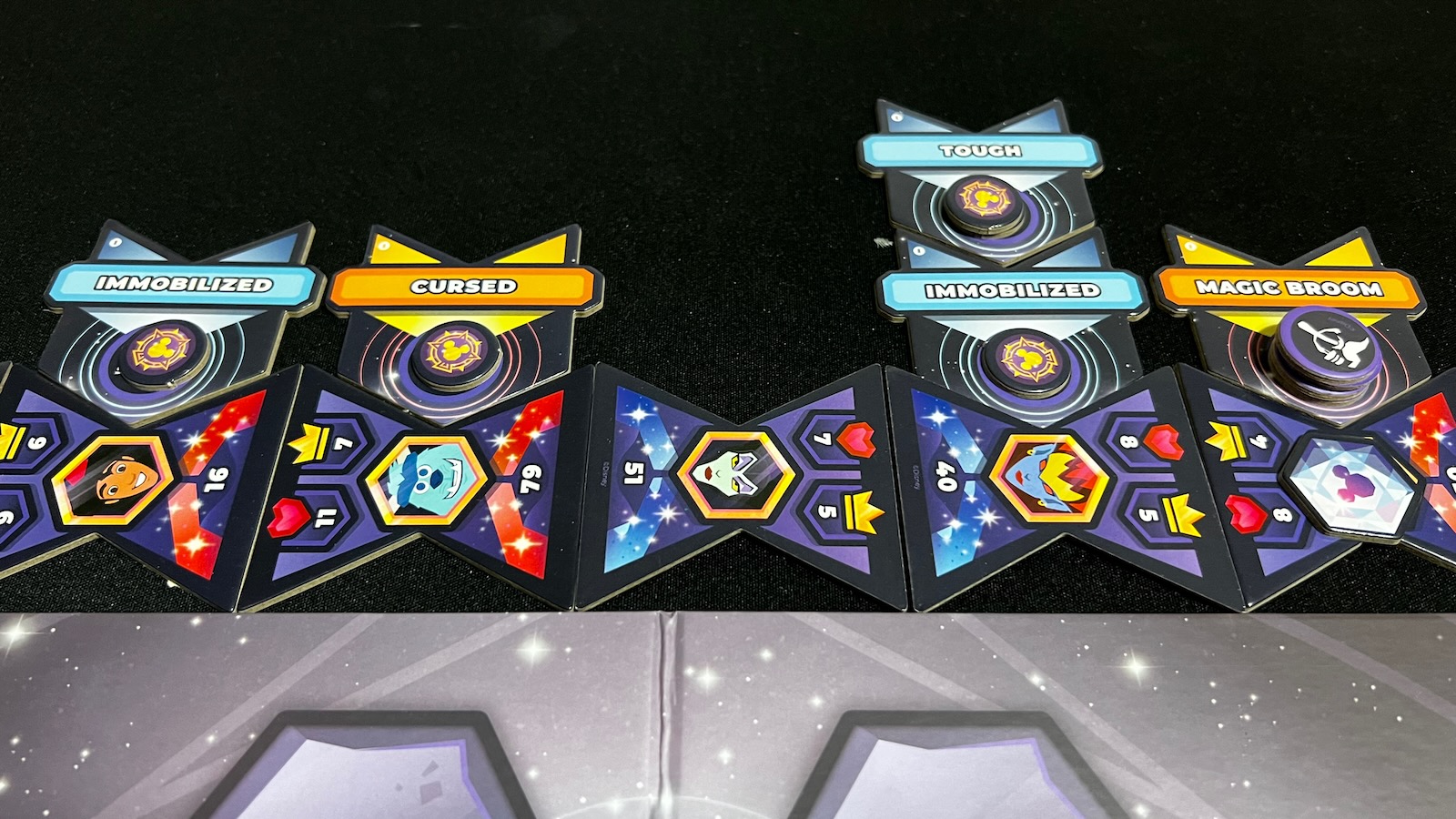 The Main Phase is executed in any order, giving players opportunities to tailor their actions to whatever strategy their cards lend them. Players can take basic actions during this phase or play cards matching their character for special abilities and effects. The Movement Phase allows players to move up to their character’s movement value and they can discard movement cards from any character to increase their movement by one. Players can also play a movement card from their character deck that usually features some special actions. The Action Phase is the attack phase. Characters can attack adjacent rivals with their base attack value and increase the attack by one with any discarded action card from their hand. As with movement, players can play character specific actions that feature direct or indirect attacks, statuses, and other abilities themed to the character. Direct attacks allow players to pick their targets while indirect attacks give a condition on who to target. The final main action is the Skills Phase. Each character has one or more special abilities described on their character card that can give them a leg up on their rivals. This can help characters like Aladdin gain the Stealthy status or characters like Sorcerer Mickey gain more magic brooms that he can use in battle. 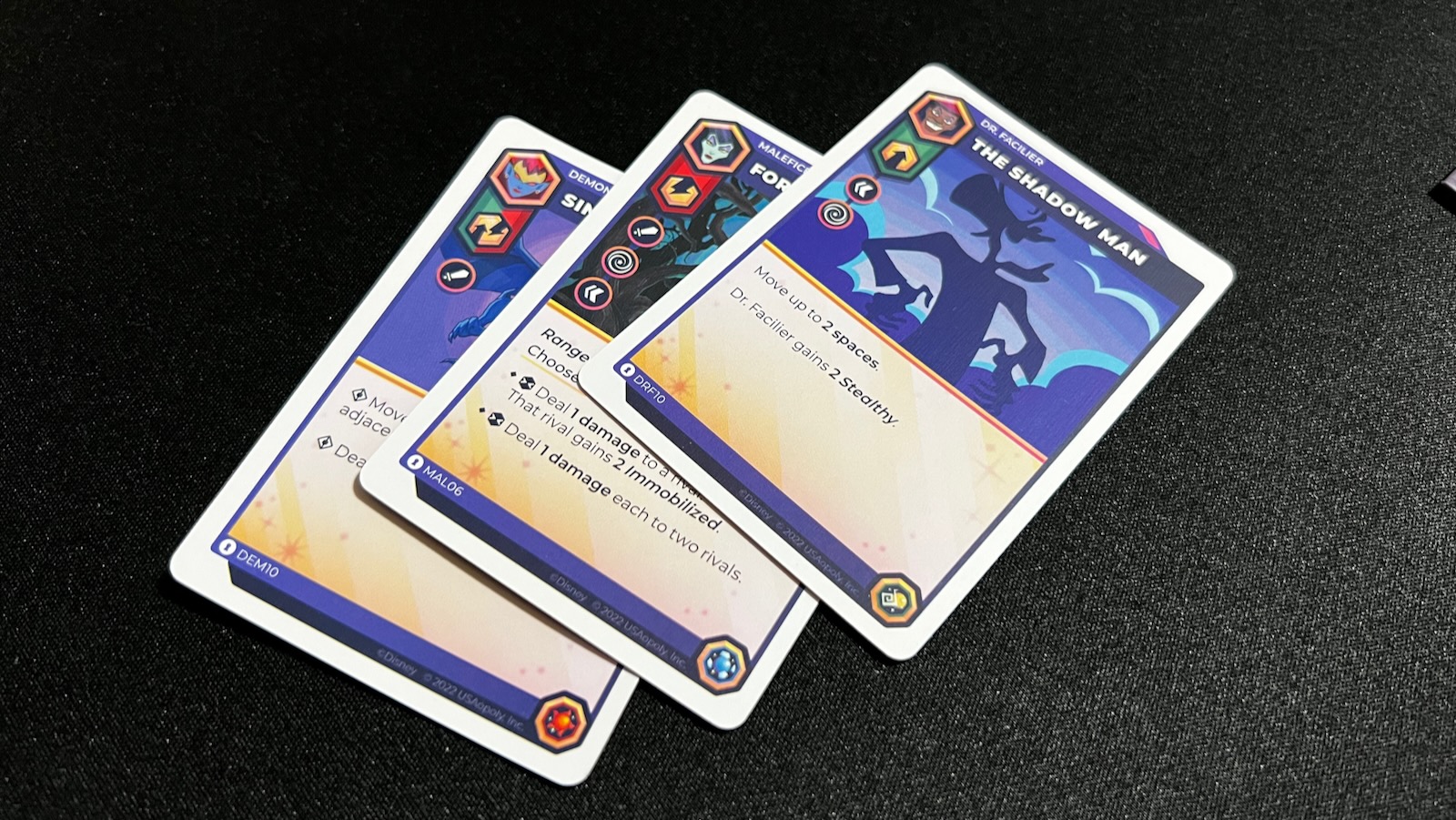 The ultimate goal of the Main Phase is to maneuver your allied characters around the board to attack the rival team and score victory points. Knocking out one of the rival opponents will gain you victory points based on the rival character sheet. KO’d characters lose all status tokens and return when their next turn would activate. Another way to earn victory points is by having characters start their turn on one of three special gold tiles.

After players decide what actions, movement, and skills to use during the Main Phase, they move into the Ending Phase. During this phase, players will draw up or discard down to their hand limit and their character’s turn ends. Turns will alternate between each player’s team of characters until each character in the game has had a chance to activate which will signify the end of the round. The game will end after the round where either player scored their 20th victory point or a player’s deck has run out and there are no more cards to draw. 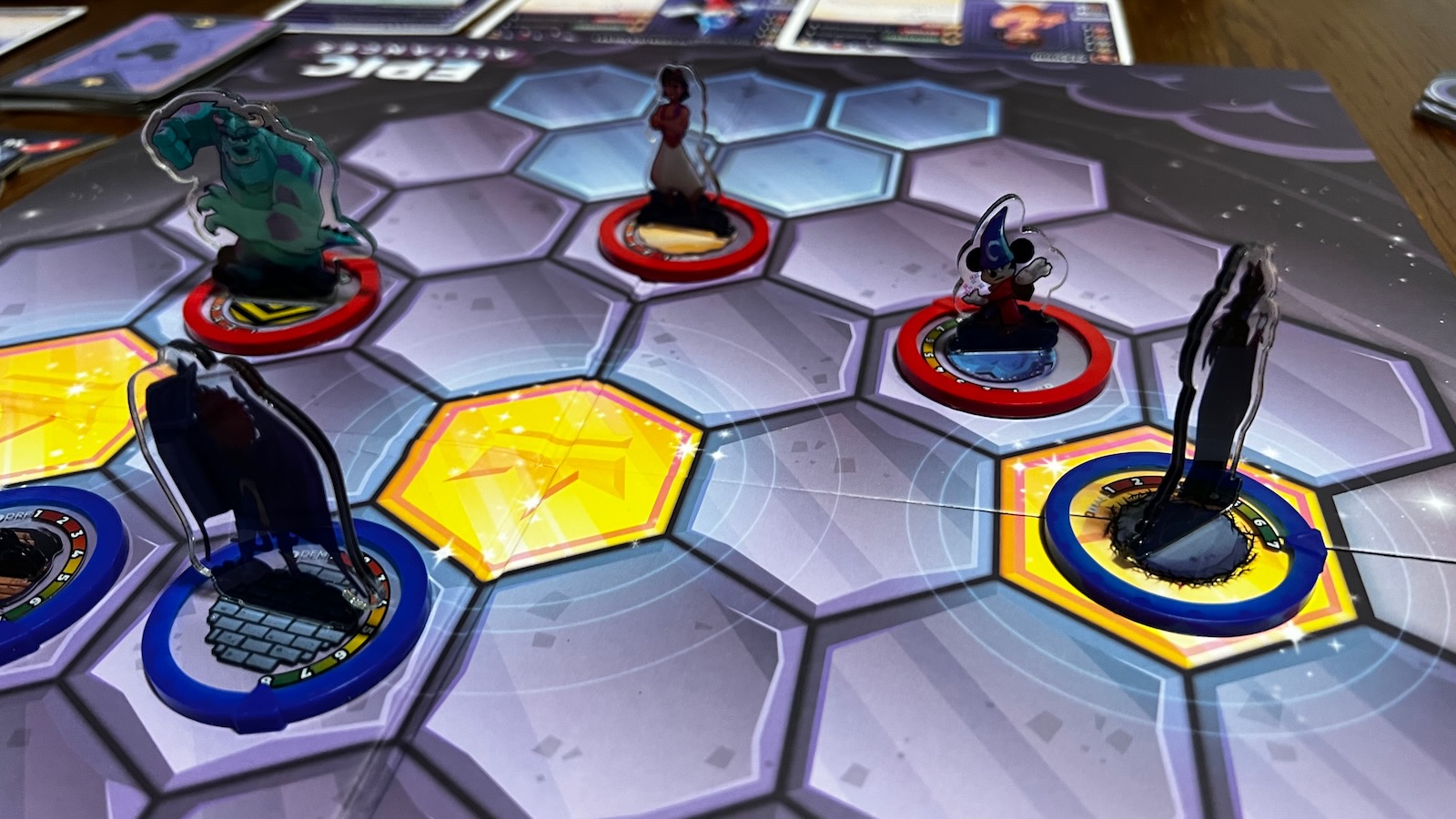 The gameplay of Epic Alliances was much deeper than expected and very satisfying for a Disney game. As a fan of games like Unmatched, you can get much of the gameplay with characters that are mostly universal (Demona from Gargoyles being featured in the base set was not expected). Each character brings a special flavor to the game and as players learn their abilities, they can create teams that balance each other out. Demona brings a ranged attack that helps support Gaston or Sully who prefer an upfront and brute force strategy. Dr. Facilier really uses his status effects and special ability to chip at other characters slowly. Ariel is a great ally to have with her healing abilities and Aladdin can use stealth to avoid attacks and maneuver into better positions. One of the most fun abilities was Maleficent’s dragon form which allows a character to regain health and deal out damage to an opposing character in kind, a great card to play when she was on death’s doorstep (insert maniacal laugh). Another fun element is creating teams of traditionally “good” and “evil” characters who create interesting combos to defeat the other team. This really stretched the fiancé who is generally not combative, but loves all things Disney. The game is also ripe for expansions with one already on the market adding Moana, Stitch, and Davy Jones to the cast of available characters. Having so many characters in the Disney/Pixar arsenal, and keeping some of the heavy hitters out of the core box allows for a long line of successful add-ons to come. 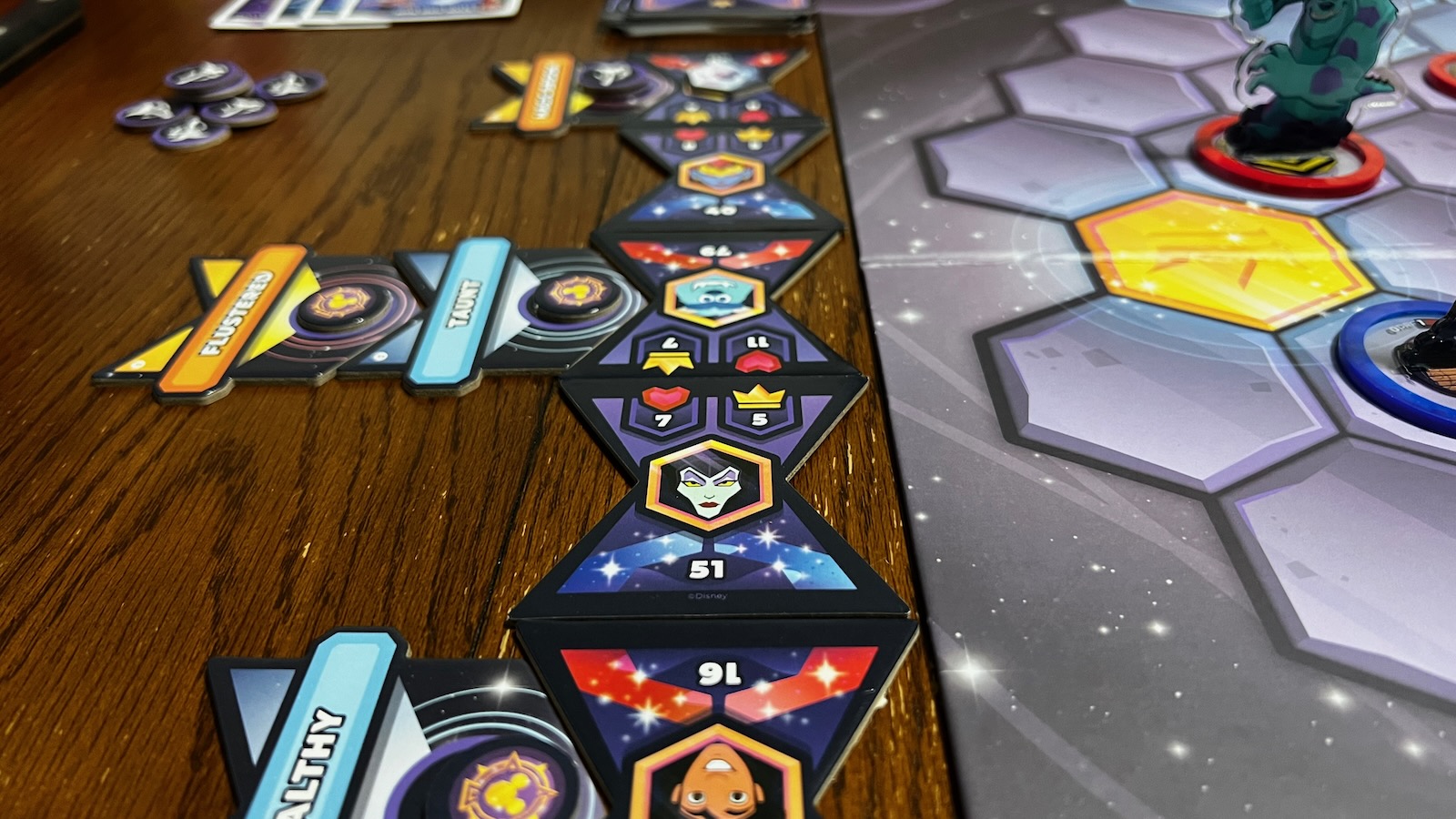 The components of the game are great for the most part. The design of the game is taken from the Sorcerer’s Arena app for the smartphone and is featured prominently using plexiglass standees for the characters. The artwork on the cards is also fun and tailored to each character nicely. Health Points for each character are tracked through plastic overlay discs and can be a bit fiddly. A separate health counter for each character or a more solid base would be a big help. Another downside is the box insert. While an attempt was made to provide a storage solution, most spaces included are ambiguous about what pieces go where. I can also see the need for some card sleeves if a lot of plays of the game are in my future…which there are!

Disney Sorcerer’s Arena: Epic Alliances is a great skirmish game that scales for players of different ages and ability levels. Pit familiar characters from the Disney and Pixar universes against each other in an epic, variable, and thematic experience.