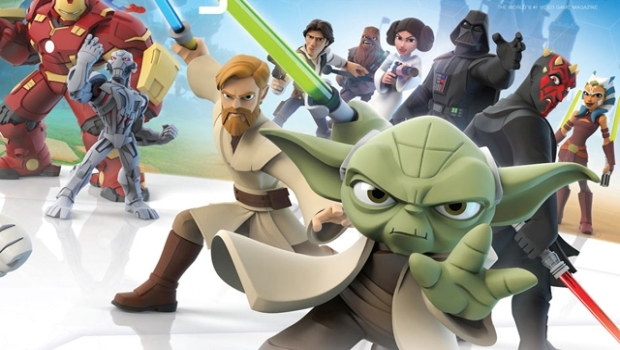 I went to the E3 reveal for Disney Infinity 1.0 (just called Disney Infinity at that point) and came away impressed, but David Roberts handled that review. Disney Infinity: Marvel Super Heroes (or 2.0 if you prefer) came out a year later, featuring The Avengers, the Guardians of the Galaxy, Brave, Lilo and Stitch, and others — Josh Devlin tackled that iteration. When Disney Infinity 3.0 announced that it would be heavily focused on Star Wars, I knew it was my time to get involved with Disney’s Toys-To-Life genre entry.

It’s hard to believe that Star Wars is literally as old as I am. It’s equally as hard to imagine that we are just three months away from a whole new trilogy. While Marvel somehow fell a little short for the series, certainly Star Wars could force-persuade us back into loving Disney Infinity, couldn’t it?

An iconic battle scene that ended far too quickly

“At last we will reveal ourselves to the Jedi. At last we will have revenge.” – Darth Maul
If you pop open the two reviews above you’ll see they had one thing in common – we weren’t huge fans of the combat system, finding it overly simplistic and ‘button mashy’. We also felt that 2.0’s story segments were lackluster, failing to capture the best part of why we love the Guardians and Avengers.

It was great to see that this engine has not only been improved, but all-out replaced in Disney Infinity 3.0. Coming courtesy of Heavenly Sword veterans Ninja Theory, combat feels more fluid, fast-paced, and effective than before. Melee-only characters like Luke Skywalker or Obi-Wan Kenobi gain ranged powers in addition to their usual force masteries. Yoda flits around from foe to foe, spinning and flipping like we briefly saw in the movies. Each character has their own unique powers, making the additional toy purchases more than simple cosmetics. Anakin can pull shields away from enemies, and Obi-Wan pushes foes off the edges of ledges. Five-season Star Wars: The Clone Wars veteran Ahsoka is your dual-wielding Padawan, juggling foes in the air to devastating effect. For the first time, though, we also get first-person shooting-enabled ranged characters. They aren’t included in the starter pack, so you’ll have to shell out some extra dough for characters like Sabine Wren or Ezra Bridger from the Star Wars Rebels series.

If there is one thing that both major players in the toys-to-life genre have been guilty of it’s locking content behind specific characters. Want to go this way or that? That content is behind a physical paywall of an element or a skill. Infinity 1.0 and 2.0 both employed this, but 3.0 relegates all of that to the optional category. The main story arch can be run with little in the way of character switching unless you want to, or you happen to die, but side areas might require a character with a Tech skill. There are holocrons to nab as well, and they might need the powers of a few characters combined, though a good few of them are still eluding me.

There is one feature that is a welcome addition and upgrade from the previous iterations, and it is a very simple one — health bars. The health bars, especially in two-player games, provide a little bit of guidance on which enemies to tackle next when you are facing a group of them.

“General Grievous, you’re shorter than I expected.” – Anakin Skywalker
Star Wars is every bit about powerful knights in a struggle between good and evil, wielding laser swords and mystic powers. It’s also every bit about epic and chaotic battles in the vast coldness of space. Disney Infinity 3.0 adds the latter to the former for a formula that I like to call “Disney’s License to Print Money.” This first playset, Twilight of the Republic, covers Star Wars Episodes I and II, though not in a canon sort of way. You’ll visit Geonosis, Naboo, Coruscant, and Tattooine, as well as stints in the space above some of those planets. In total, there are dozens of hours of challenges, collectibles, and side content in addition to a half-dozen hours of main story to enjoy.

As you complete the objectives and side content, you’ll be given star ratings from one to three. Some missions have obvious additional star opportunities, such as completing a story segment with a character as it appeared in the movie. For example, if you want all three stars for the battle against General Grievous, you’ll need to complete it as Obi-Wan and on Extreme Difficulty. Throw in 100 mynocks to kill as an additional collectible and you’ll have plenty to do before you even reach the sandbox.

Throughout the story you’ll gain access to several vehicles. Most of them are merely for your enjoyment, allowing you to zip around the world at a faster clip. There is, however, a podracing section. Sure, it’s a little odd to run it as adult Anakin, but it’s the floaty controls that made me grit my teeth a bit. It’s a short three-lap race that might challenge kids enough to hand the controls over for you, the parent, to finish. As somebody who has put hundreds, if not thousands of hours into racing titles over the last few decades, I had to take three swats at it thanks to the fairly garbage controls. I was happy to see it in the rear view mirror.

If you’ve been to Disneyland or Disneyworld recently you’ve likely seen the little Amiibo-esque versions of the various characters in the shops. These little “sidekicks” are now a part of the Infinity universe, granting additional bonuses and goodies if you complete their side content quests.

Darth is far tougher than in the films

“This is a new day, a new beginning.” – Ahsoka Tano
If Disney is the place where Imagination comes to life, the Toy Box is where that happens. Unlike previous iterations, the Toy Box mode provides templates and pre-built arenas, allowing new or inexperienced players to jump right in. You can jump into race cars, play in a hastily-cobbled Agrabah from Aladdin, or just fly around in the various vehicles you’ve unlocked. Yes, the bulk of the building blocks, vehicles, and characters are still locked behind the single-player challenges, but there is a great deal of content available right out of the gate.

As somebody who didn’t play with the Toy Box mode much in previous titles, I was happy to see there are a few handholding modes to help bridge the creative gap. Fans of other worldbuilders like Minecraft will have a leg up, but even an amateur like me was able to build a series of pipes to skate on, leading to a difficult platforming section for a lightsaber battle. Best of all, you can also download items that the Disney Infinity Community has made. I checked out a Death Star level that somebody had built, allowing me to recreate some of the fun moments from the movies, as well as the chance to check out some of the vehicles I’d not yet unlocked.

The best part about Disney Infinity, across all three iterations, is the ability to drop in and drop out and play with friends. The racing minigames, the storyline, and the worldbuilding is all made better by doing it with your pals, and that’s not changed for 3.0. Add on top of that the ability to pick those same friends up and hurl them into the nearest Sarlacc Pit and you know you’ve struck gold.

Disney Infinity 3.0 improves combat, adds space combat, and couples it with the most storied franchise in history to create a hit. The story is worth playing, and (most) of the vehicles are a great addition to the formula. With dozens of hours of content on top of the Toy Box’s modes virtual sandbox, this year’s iteration truly has the potential for infinite fun.

Ron Burke is the Editor in Chief for Gaming Trend. Currently living in Fort Worth, Texas, Ron is an old-school gamer who enjoys CRPGs, action/adventure, platformers, music games, and has recently gotten into tabletop gaming. Ron is also a fourth degree black belt, with a Master's rank in Matsumura Seito Shōrin-ryū, Moo Duk Kwan Tang Soo Do, Universal Tang Soo Do Alliance, and International Tang Soo Do Federation. He also holds ranks in several other styles in his search to be a well-rounded fighter. Ron has been married to Gaming Trend Editor, Laura Burke, for 21 years. They have three dogs - Pazuzu (Irish Terrier), Atë, and Calliope (both Australian Kelpie/Pit Bull mixes).
Related Articles: Disney Infinity 3.0
Share
Tweet
Share
Submit