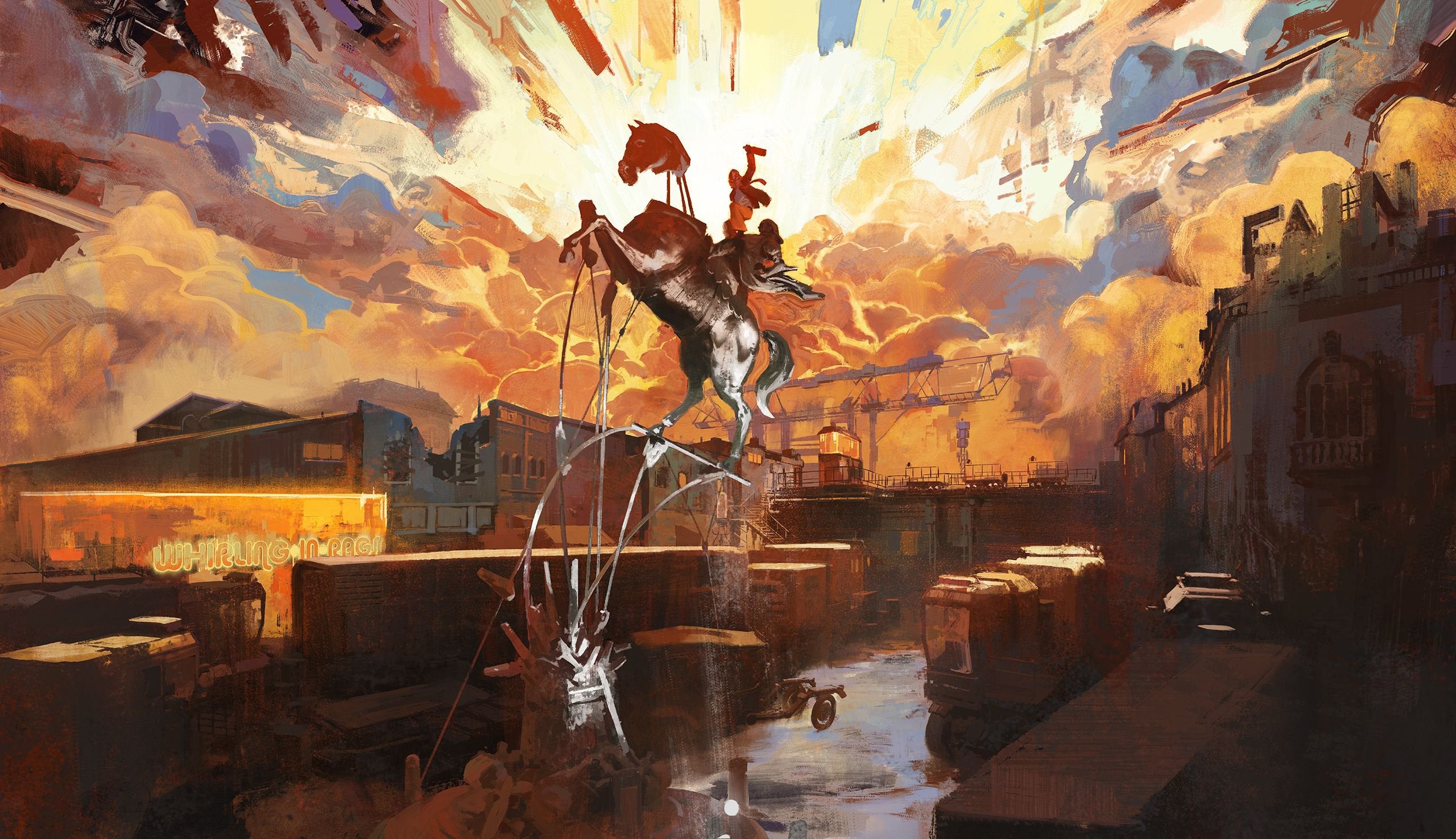 Disco Elysium is a game that begins unlike most as it sets itself apart from the others almost immediately. During its first scene, players are given a glimpse into the cryptic, existentialistic, and complicated mind of our unstable playable character. After getting acquainted with my environments and shabby apartment, I look into the mirror to analyze and get to know who this person I’ll be playing the rest of the game as and the result is complicated, to say the least. All we’re told about our character is that he is an alcoholic and unstable amnesiac with a very complex and creative, albeit talkative, brain.

As a narrative focused game with table-top RPG mechanics, the game uses the tried and true method of allowing players to create a character by having them have no recollection of who they are, so they build who they want to play as. At the start of the game, players will be prompted to choose what type of character they’d like to play as depending on whichever skills they chose. Want to be a tough brute? Put all points into Physique. Want to get into the mind of your allies and opponents? Put points into Psyche. Or if you’d rather be cunning, agile and observant, then Motorics is where your points should go.  I, on the other hand, put points into intelligence-based skills for my character as I believe knowledge is power especially in these types of games. 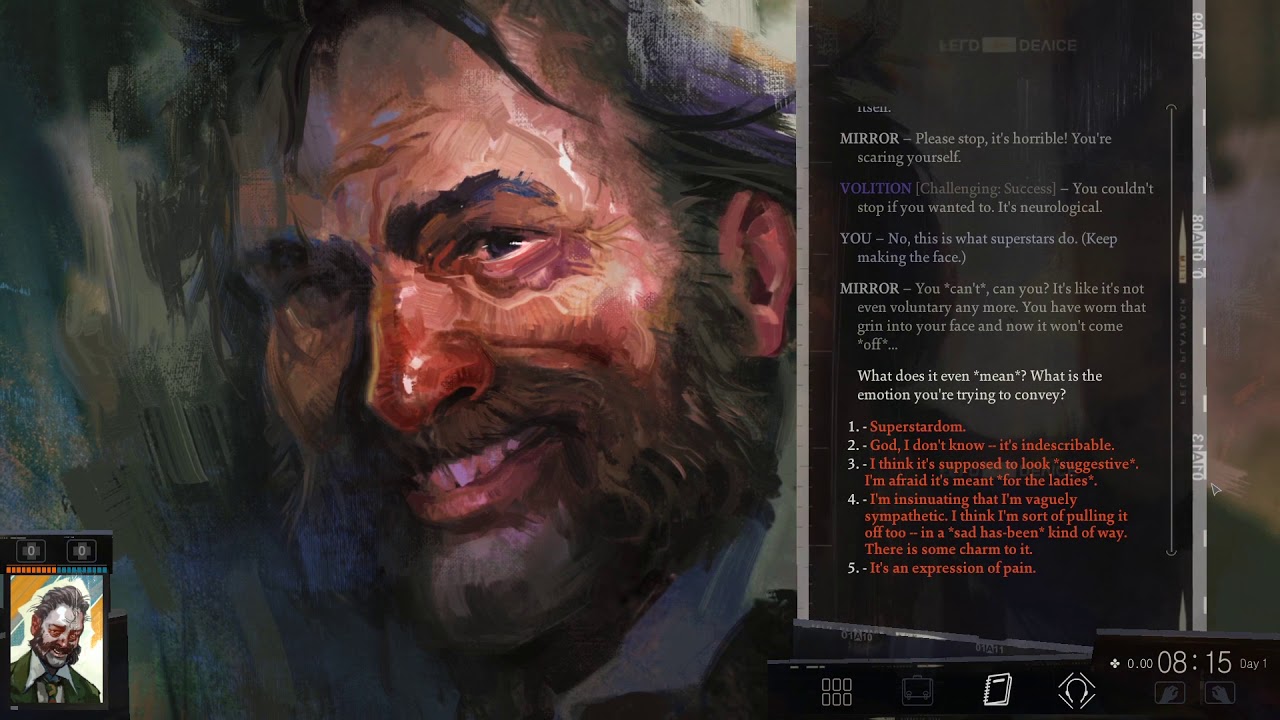 Playing on, I later find out that I’m a cop in Revachol, a city amid a communist revolution where a murder has taken place, and I, as a detective alongside my stoic partner Kim Kitsuragi, are tasked in solving the case. In order to do this, I had to move around Revachol asking questions to its odd and opinionated residents, many of whom have their own stories to tell and goals to achieve and will not think twice to use you to achieve them. Seeing as most of the people of Revachol do not fear or respect the police, players will have to figure out ways to earn it.

Thankfully, your brain will always be there with you during well-timed moments in conversations to help out, whether it be your encyclopedia of knowledge, logic, conceptualization, or more, and these branches will help out depending on the situation. The game also has a unique system called “thought cabinets,” which players can equip to unlock specific game scenarios. 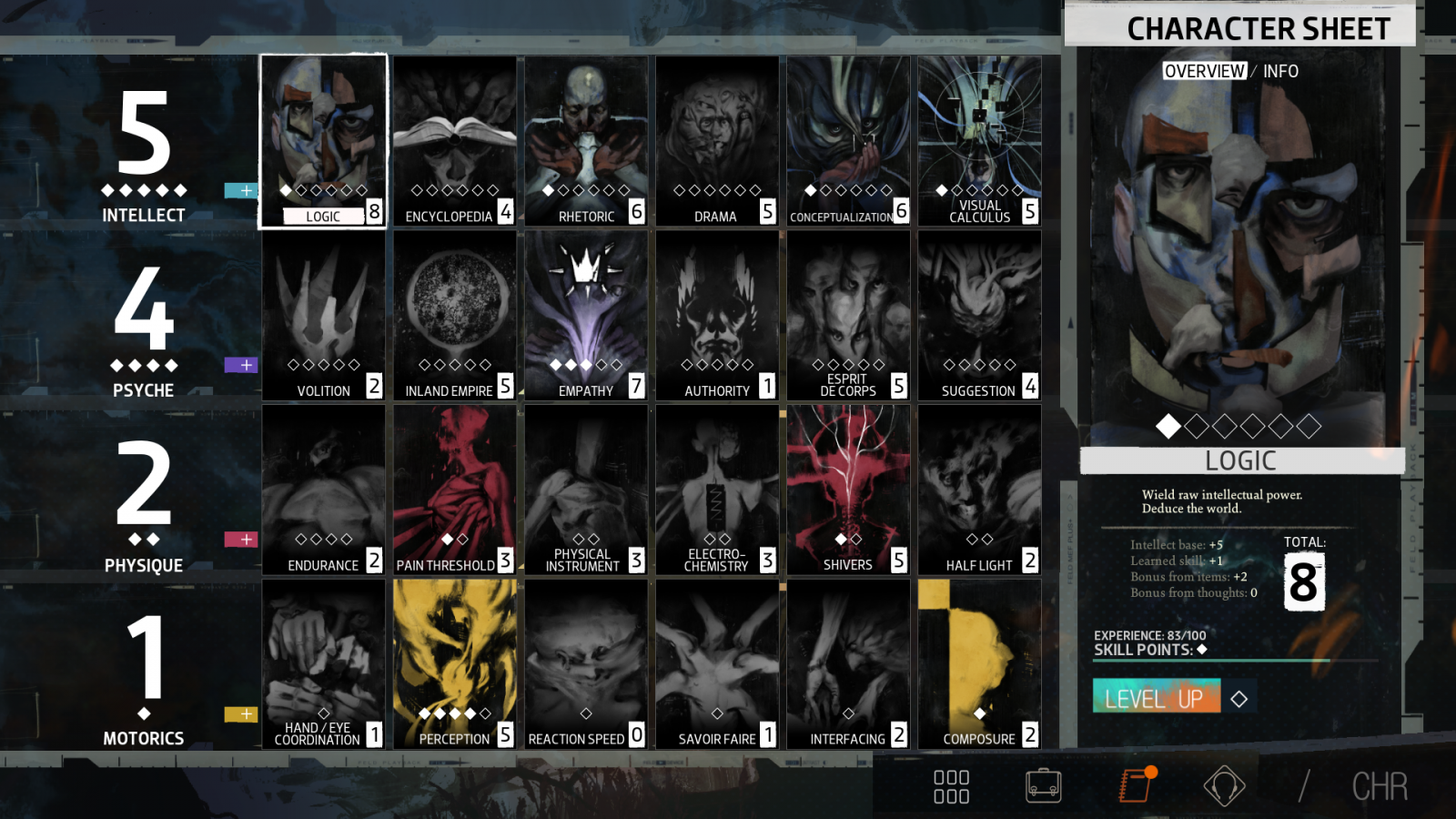 Additionally, as politics is a strong theme throughout Disco Elysium, these parts of your brain will often stop you between actions to try and tempt you to choose a certain side where you’ll need to ask yourself who you are. Am I fascist? A communist? A moralist, perhaps? Regardless of whichever side you choose, the interactions you have with NPCs will play out differently as they’ll always react a certain way to your ideology.

In Disco Elysium, there are lots of dialogue options. This is no understatement either, especially in The Final Cut, where a lot more lines of dialogue have been added in addition to brand new quests and branching decisions. These decisions are made with a system called skill checks which have odds attached to them based on either stats, circumstance, or repetition, and are executed via a dice-roll.

The higher the odds, the more likely said action will result in success. Other than character stats, players can also customize their detective with the vast array of clothing available in the game. Based on all these factors, Disco Elysium allows players to play however they wish, and with its intricate systems, no two players can have similar characters. That being said, it’ll take the average player no less than 30 hours to see most of what the game has to offer, and it has quite a bit to offer. 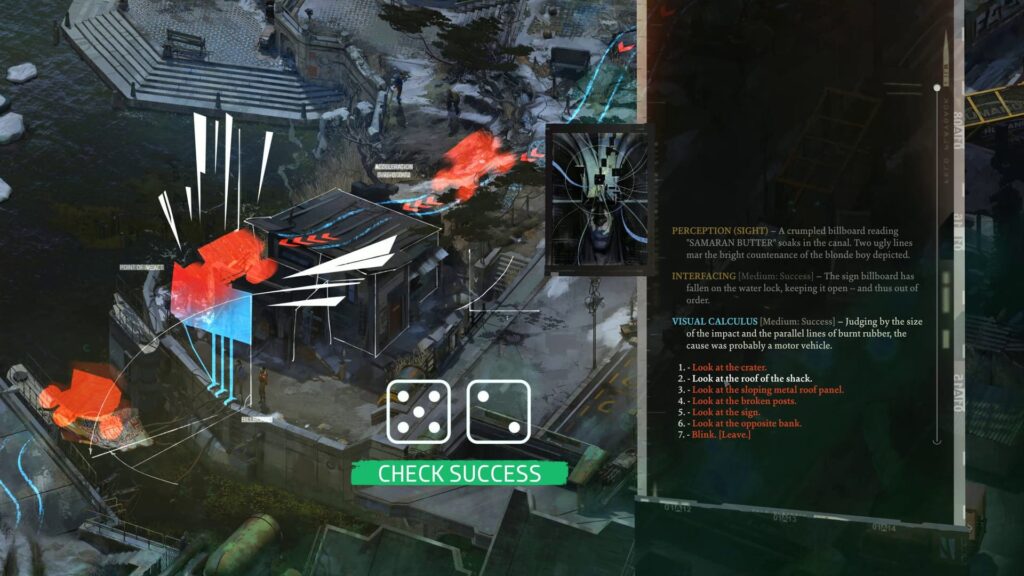 While Disco Elysium is a relatively stable game, it does have a few technical hiccups here and there that are hard to not point out, such as voice lines cutting out in the middle of a conversation, and interactions with some objects not working half the time unless you push the button repeatedly. Other than that, though, Disco Elysium is otherwise an absolute blast to play through.

Revachol has multiple intriguing characters to engage, a rich history to explore, philosophical references to ponder, a unique art style, a fantastic soundtrack, and so much more.The game also isn’t afraid to depict humanity and its ugliness, be it racists, fascists, sexists, or what have you, which is one of the reasons that makes it so unique compared to what we have in the market these days. 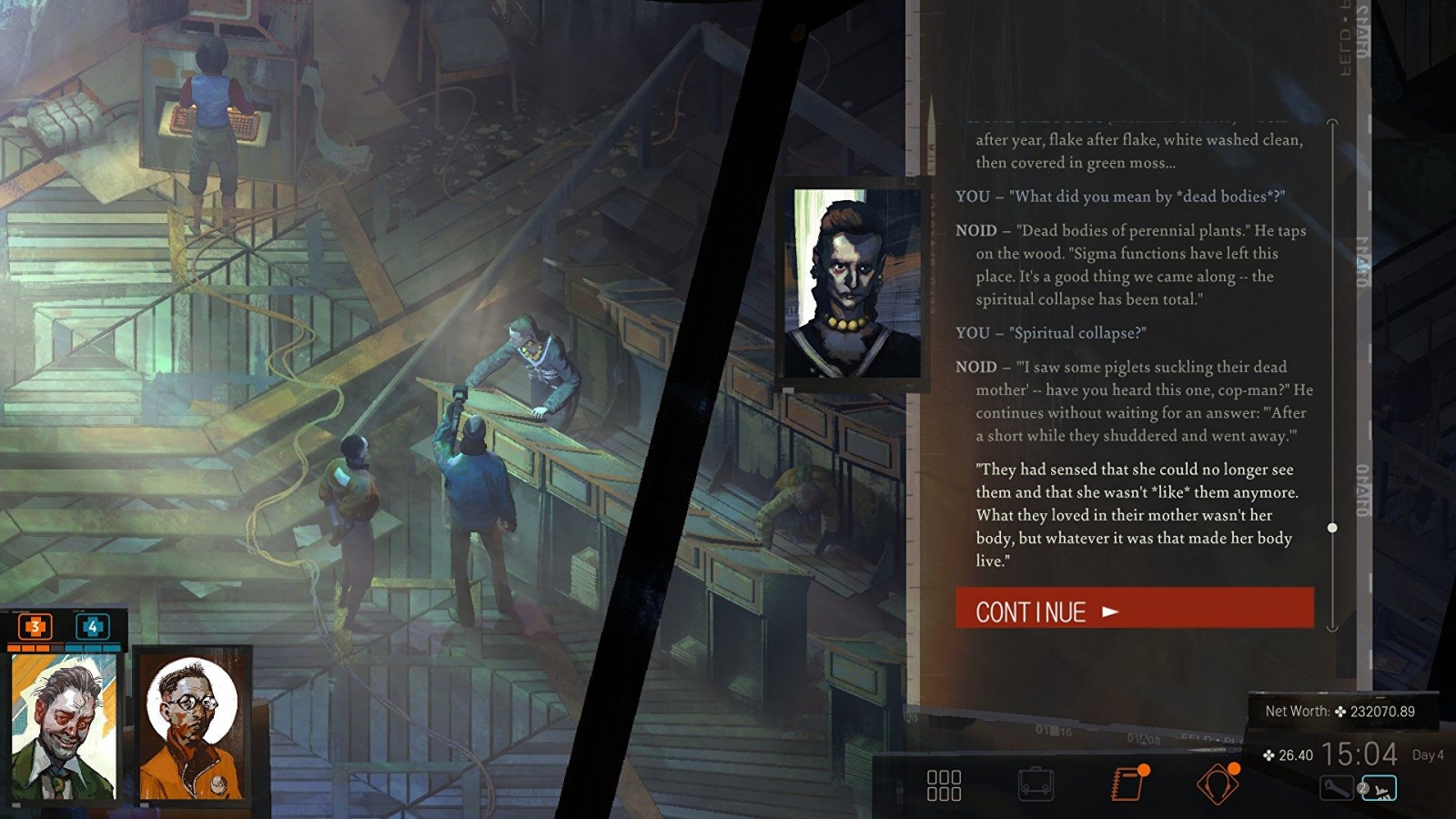 The Final Cut further enhances its already enjoyable experience by including additional quests to enjoy as well as tons of new voice lines by astonishing voice actors who voice each character incredibly well. Frankly, I can go on about how good Disco Elysium is, but I’ll end this review by saying this is one of the highest games I’ve ever rated. If you’re anything like me and enjoy playing through unique experiences, then I implore you to get Disco Elysium: The Final Cut as it is one of the best ways to so.

Disco Elysium - The Final Cut is an incredible narrative experience with deep and intricate systems. While the port has a few bugs that need working out it is still objectively the best way to play the game.

Abdul Saad is an avid gamer and computer geek. He's been writing for four years on news, reviews, previews, and more on multiple gaming sites. When he isn't writing or playing the latest JRPG, he can be found coding games of his own or tinkering with something electrical.
Related Articles: Disco Elysium - The Final Cut
Share
Tweet
Share
Submit