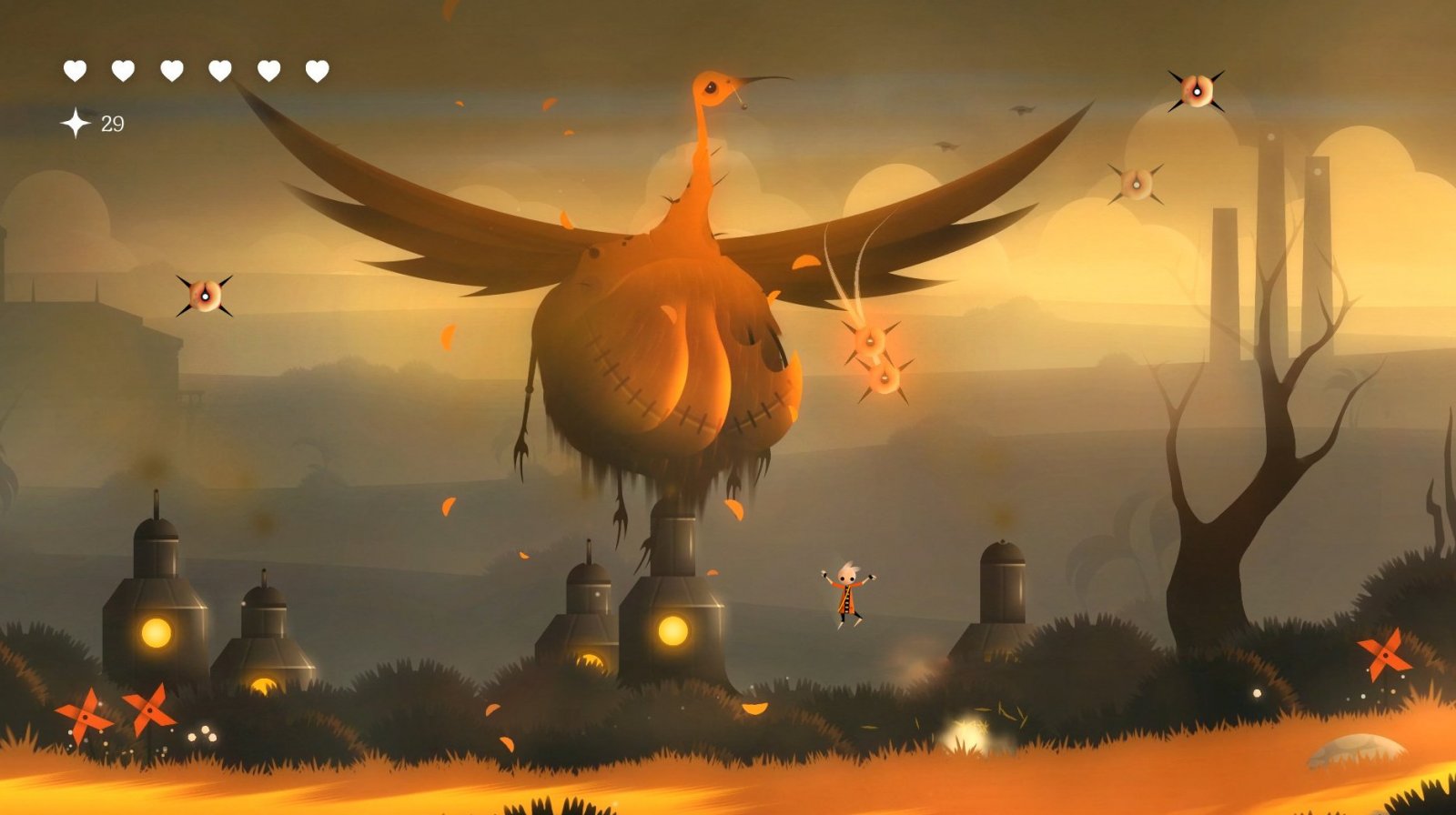 Being in a coma is an experience that many people fear. But what if the world you woke up to is not the world you remembered? How long could you hold onto your sanity if you awoke inside an asylum where the love of your life was taken, and all you remember is a soulless figure that took her? Neversong is a nail-biting, mind-twisting, emotional roller-coaster of a thriller, but is also a heartwarming adventure game that shows the humanity and compassion of the kids in Red Wind. I should have known I was in for a sanity-checking experience when I was greeted with a disclaimer warning players of emotionally upsetting scenes and visually traumatic experiences. But I’m a sucker for thrills.

You play as Peet, an orphan boy who lives a depressing life with no upside in sight. Catching the eye of the most beautiful girl in the town of Red Wind named Wren, they become a couple, and Peet’s bleak world begins to look bright. While seeking fun one afternoon, they enter Blackfork Asylum where a shadowy figure known as Dr. Smile kidnaps Wren, leaving Peet in a shock induced coma. The game began with me awakening from the coma, still inside the stir-crazy walls of the asylum. It’s a cold and desolate place that sets the tone of depression and fear. 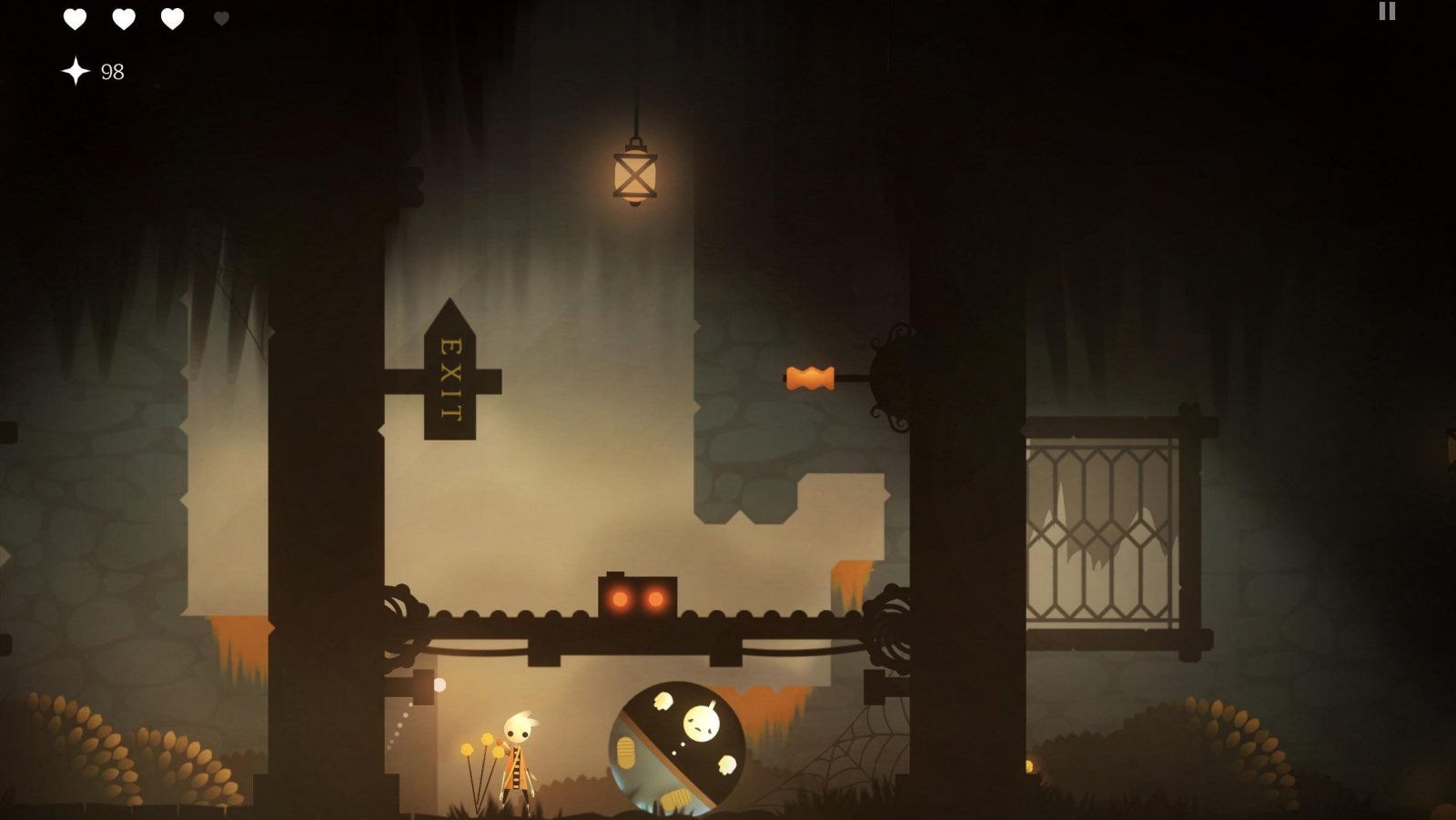 What are friends for?

The level design, from the beginning of this adventure to the end, is designed to incorporate clues for solving puzzles, game mechanics, and being a visual aid of the evolving narrative. Exploring the asylum, I found myself retracing my steps in order to solve a puzzle to unlock an elevator to the next area. Each time I passed through an area I had previously been, something changed: a clock began ticking, a man standing in a window with a knife, or something out of place. It’s moments like this that made the game deeper than what was on the surface. It made me think I was losing my mind, and that’s the point. The game forces you to pay attention to the environment in order to solve the puzzles. It might be a picture on the wall with a hint, or maybe letters carved in the door frame. It takes some effort to retrain your brain, but it becomes second nature the more you play.

Often, the game introduces items and mechanics to you early on, leaving you to wonder where and how they will be utilized. And that all plays into the creepy, mysterious world around you. Escaping the asylum, I found myself in Wren’s house where there’s an old piano. I would later discover that this piano will be used throughout parts of the game to either unlock clues, items such as weapons, and more. You can either use the keys on the keyboard to play notes, or your controller, but using the keyboard felt more natural to playing an actual piano. Once outside, I was greeted by a beautiful world that was the opposite of the claustrophobic atmosphere of the asylum. The art style of the game is beautifully designed with rich colors to bring attention to interactable objects. The manner in which the foreground and background are designed gives a sense of depth to this insane side-scroller. 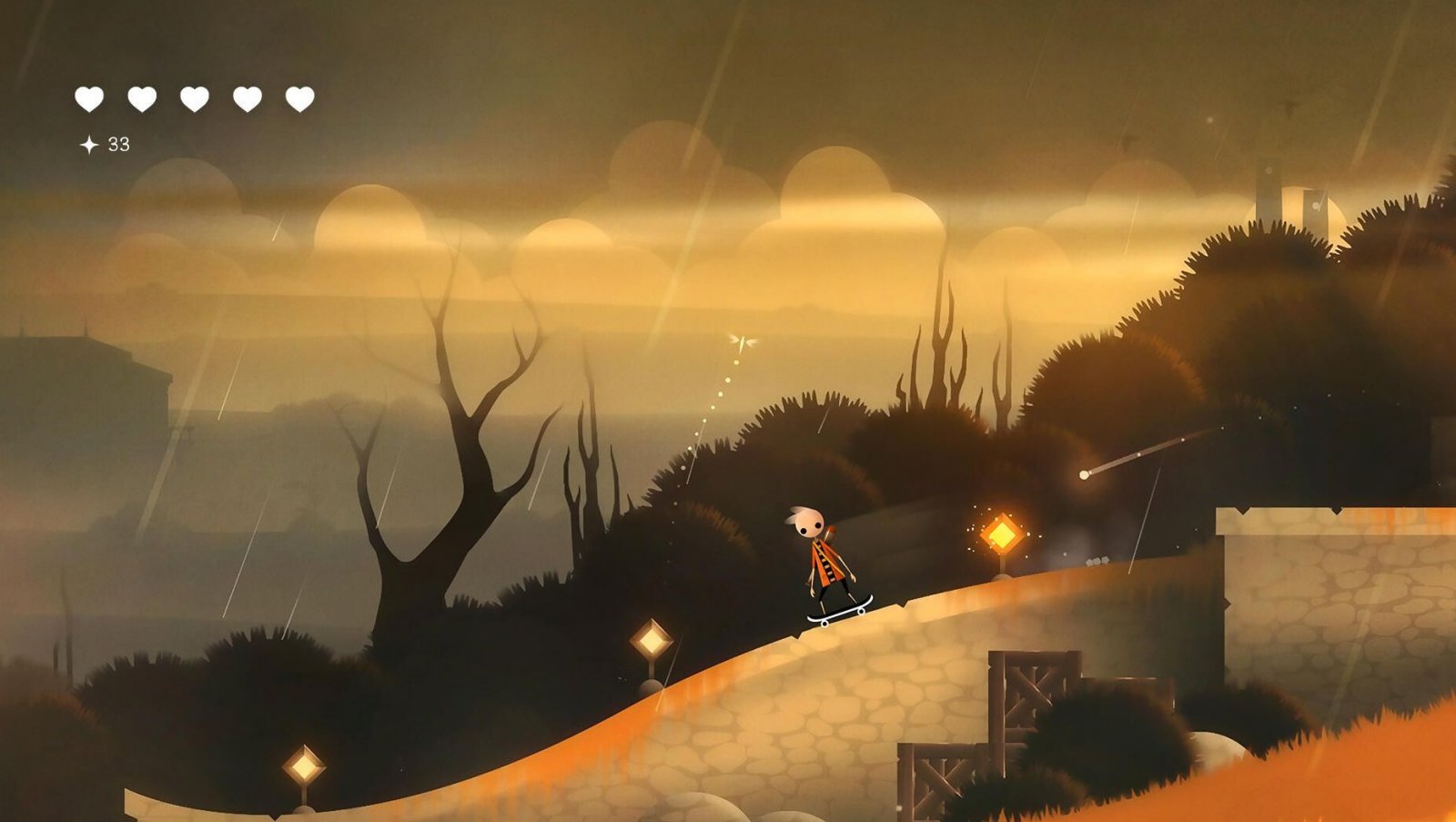 A road to doom

As I explored the new world outside of the asylum, I found that some houses and business can be explored as well. But there are some homes with special color-coded locks on them that must be opened by other means. I leave that for you to explore on your own. Once outside and exploring, the platforming elements of the game began to become apparent, as I jumped from roof to roof, grappled high hanging metal balls (a questionable mechanic) and collected coma cards. These cards unlock new outfits and other collectibles to give context to the story. Aside from all the horror elements found in the game, there are a good number of elements you probably thought you wouldn’t find in this game, and it really shows how well designed this game is.

Continuing my traversal, I ran into other kids that not only fill in the blanks to the story, but key you in on features in the game. What I enjoyed most about these encounters was that each kid, some related to one another and some not, had a different personality, and even were downright comical. The game takes on a lighter, more jovial tone when interacting with others, but that doesn’t mean danger isn’t lurking. The dialogue and interactions with them feel childish and fun, as some are either too busy to help you on your adventure because they are jumping rope, or on their own adventure, or looking for clues as to the disappearance of all the adults. Some of these kids even have beefs with you, blaming you for Wren’s disappearance or are simply out for themselves; but what this shows is that the town of Red Wind is a bustling and thriving world that is well designed. These complex relationships make the story feel ever evolving and in constant flux, and I loved every minute of it. 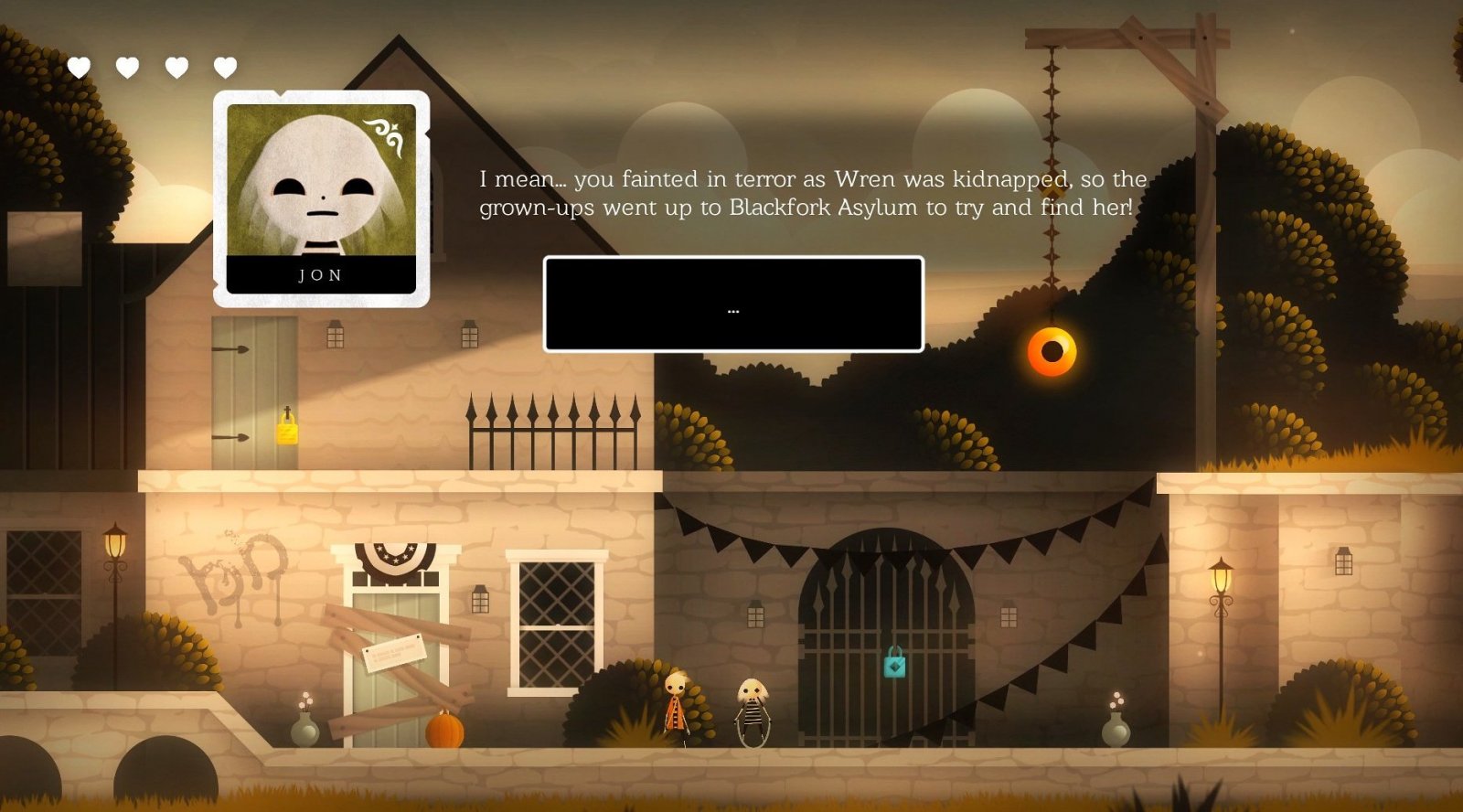 to a billion and beyond

And like most adventure games, the hero will obtain a weapon to fight off evil. In this case, you use a baseball bat that belongs to Wren. Even after acquiring a weapon, the game doesn’t stray too far from its narrative stride. Acquiring the baseball bat early in the game means that you’ve got some bad guys to beat down, and with a simple combat system similar to Ori and Hollow Knight means that it’s not about complex combat systems but how you approach it. In fact, it’s what I expected because it fits Peet’s persona. Fighting off spider-like creatures, flying… things, and grown-ups that have lost their minds or have been transformed into creatures that one could have nightmares about, are gratifying moments in this narratively driven experience. Many of the boss fights take place at the end of levels or once you’ve completed your objective. These boss fights often reminded me of old NES boss fights as it took some creativity and quick thumbs to beat them. Each boss forces you to adapt your style of play, forcing you to use more than just the simple combat system to defeat them.

As you explore caverns, dilapidated homes, and locations that appear to have the life strangled from them, the early disclaimer is made evident. You’ll find adults that are trapped in cages, appearing to have lost their sanity, mindless people that give chase after children as if they’re preying on the weak, and even more bleak visuals. But I found it all fitting and in good taste. In fact, the overall story reminds me of a book called Giant Killer, in which a girl battles her own internal demons that have manifested into something almost physical because of her emotional state. 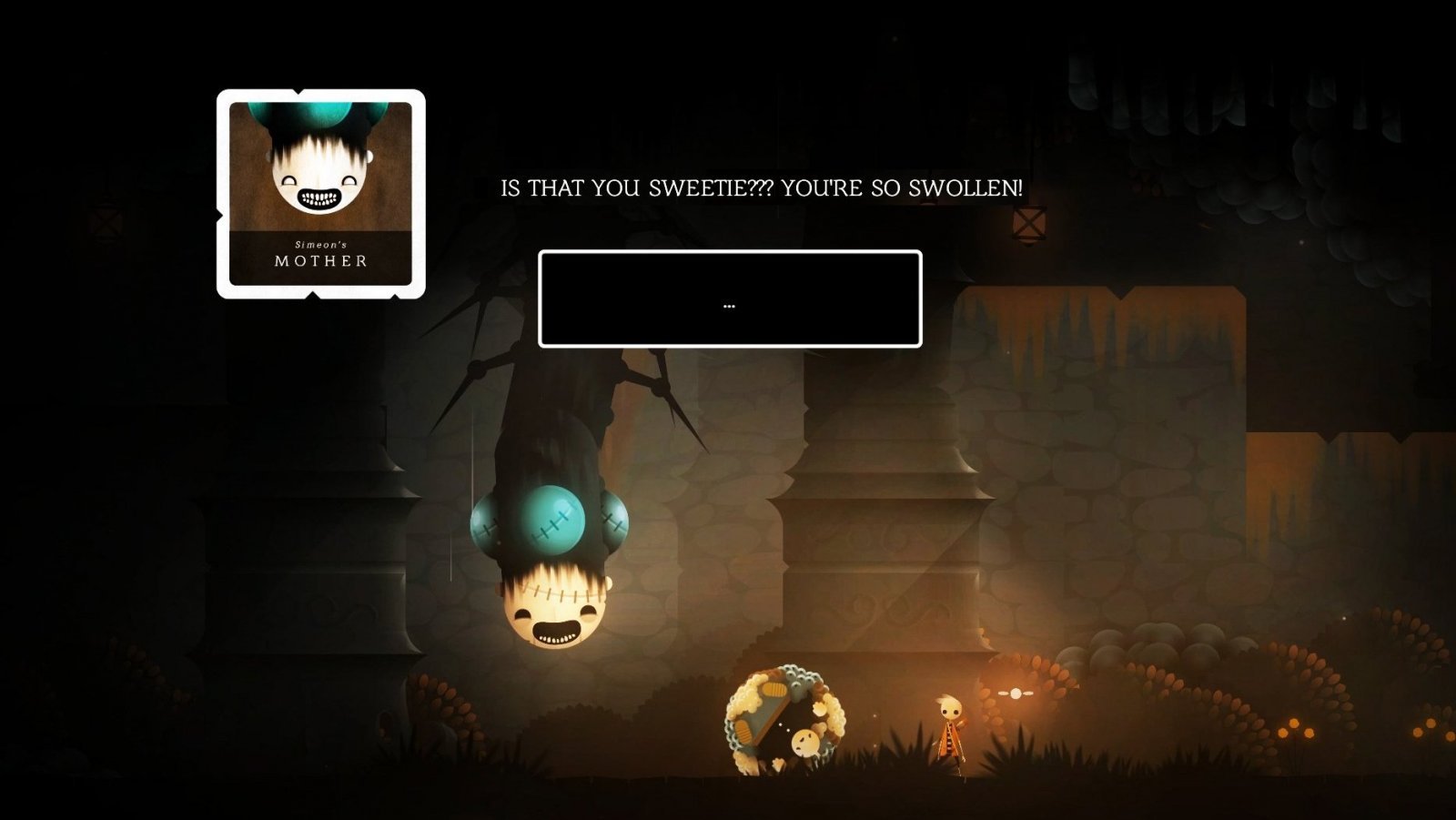 Throughout this thrilling and sanity questioning experience, I did stumble across a few gameplay choices and mechanics that felt like they didn’t fit with the overall tone. A few of the enemies feel taken from games such as Metroid or other sci-fi games. In a horror game, you’d think to see the creepy-crawly, corner hiding, lurking from the shadow creatures, but some look like mechanical animals. While the game mechanics were fun, some felt out of place, like gloves that act as magnets. Also, when you discover a little bird that’s been trapped in the cage it acts as a co-partner in the game. Unfortunately, you’ll often forget that it’s following you around because there’s a lack of banter between Peet and it.

Neversong is an amazing adventure through a world that feels uniquely crafted. It stands out in its genre because it takes platforming, thriller, and side-scrolling game elements, mashes them together, and what we get is a well-balanced narrative adventure game.

T.K. is a freelance writer, narrative designer, and author. Writing and developing narratives and giving voices to digital world and characters is his passion. As a game writer, QA game analyst, and editor for Gaming Trend, he enjoys being a part of the gaming industry.
Related Articles: Indies, Neversong
Share
Tweet
Share
Submit