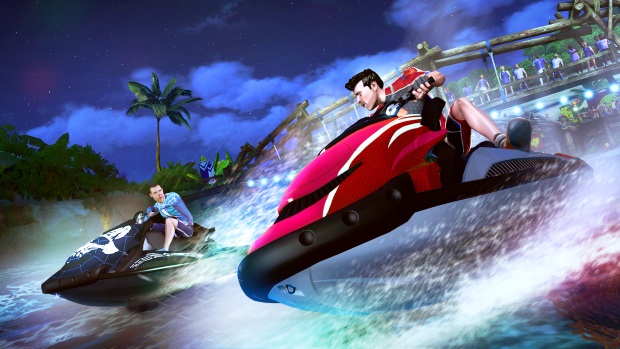 If you’re one of the millions of owners of the Xbox One console, you might find it odd that the Kinect camera has barely any motion control games. Though It’s likely that you use at least some of the integrated functionality, it’s hardly something that is likely to impress your guests. Enter the much-loved Rare with a late entry : Kinect Sports Rivals.

With six events, a bevy of online leaderboards and competitive ladders, downloadable content and three teams offering to take you in, the icing on the cake should be the voxel-powered avatar generator which creates a model of your face and body to use in-game. So why is it that for me the generator is about the only thing worth visiting?

Frankly, I didn’t get far into the storyline, and it’s not due to lactose intolerance. Yes, everything suffocates under a layer of cheese, but what I found was that some games, such as soccer and tennis, simply did not read well enough to be able to reasonably continue. Due to an injury to my Achilles tendon, it hurts to walk, and now all but the shooting minigame aggravates my foot. I reached my frustration point before that however, and am comfortable my exposure to the content to give the game a fair assessment..

[singlepic id=19237 w=620 h=350 float=center]Let’s get this out of the way now: Kinect Sports Rivals is not worth full sticker price. A lot of the content has been done better before, either in their own brand or other systems. It comes across as a strung-together set of mini-games with no significant variation in setting or design.

The DLC offered within is also a sad state of affairs – buying costumes for a single event for your in-game avatar puts Oblivion’s famous Horse Armor to shame. Don’t get me wrong – running around wearing a spandex advertisement for Battletoads isn’t the worst thing in the world, but at the three dollar price point it would equate to 5% of the value of Kinect Sports Rivals, and that one outfit you’d have to buy six times to have it represented in each event.

Speaking of which, the six events that Kinect Sports Rivals offers are wave racing, a standing-around version of soccer, rock climbing, target shooting, bowling and the worst implementation of tennis we’ve seen in a game in quite some time. In fact, I’m going to dive into the ugly to get it out of the way.

[singlepic id=19240 w=620 h=350 float=center]From motion reading errors, to timing and flat-out not seeing my serve, I think the words “Come ON!” came out of my mouth more times in three tennis matches than they have in playing games in the last quarter. From video adjustments on two different televisions, re-arranging furniture to using entirely different rooms, I simply could not get Kinect Sports Rivals to let me play either soccer or tennis with anything resembling a sense of control.

Tennis was good when it worked, but sometimes it was like it was entirely disconnected. Using either minor, normal or even exaggerated motions yielded no consistency for reads on serves and returns. This caused the most frustration as I would expect it to simply work and was baffled when it couldn’t even get a simple serve right – especially when it was simply repeating an action I completed just moments before.

[singlepic id=19239 w=620 h=350 float=center]Soccer has its own limitations, since you can’t actually run with the ball – instead, you pass it up from player to player, choosing which direction you’ll send it to avoid the attacker between you and your intended target. When you reach the last player, you’re given a short period to wind up a one-timer to score on net, and then the ball is turned over to your opponents to do the same. Not only did I have read problems with it, but the game itself isn’t actually fun. Often when aiming to kick around a defender, it curves right to them in the wrong direction.

Rock climbing was a better experience, as I was able to move around without too many issues, but I did find I had to fiddle with the Kinect as reaching up high could go outside of the sensors range. For reference, I am under six feet tall, the Kinect is perched atop my television and I was in what is considered the sweet spot.

Bowling is far more refined in its execution, but given that we’ve been bowling in motion-games since the dawn of the Wii, I found it to simply be an HD iteration – no more, no less. I enjoyed playing this part of the game most.

[singlepic id=19238 w=620 h=350 float=center]Target shooting was hit-and-miss, (HA!) where you and your opponent are shooting towards each other with a large clear barrier in between. The top-most targets are common, meaning you want to shoot them before your opponent can. Targets move around, sometimes popping in and out, or travelling side-to-side. Some targets are to be avoided, while others require being shot in a particular sequence. The read on the aiming was a little mushy and while this mini-game may appeal to some, I found it simply OK.

Last is the wave-racing, where you have some beautiful water effects, fairly predictable control of your watercraft, and a mix of still water alongside open sea waves and ramps to trick off of. The ramps and environments lend themselves to finding the best path around the map, however with no power-up pickups (you are limited to selecting before the race, and have no in-game boosts otherwise) it felt like a good start but not enough to carry the rest of the game. I also found that steering lacked a lot of cues one might expect, and was frequently drawn to the mines.

[singlepic id=19236 w=620 h=350 float=center]Powerups exist in each game, and custom costumes and equipment, liveries and the like are also present. Some you can win, or you can play to earn credits to buy them from the store. Often changing the balance of attributes, these customizations should have been compelling. I found that instead they were annoying, as each of them were also purchasable with real-world money.  The ecosystem doesn’t seem to exist where people care to compete against the world, and the mayhem of livingroom competition isn’t there.

Kinect Sports Rivals answers the question “What has Rare been up to?”. Sadly, the game falls short of the mark on almost every category, with the biggest hit being on fun. With three of the six included events ranging from unpleasant to unplayable, you get dragged through dialogue I'd never, ever want to hear again. Voxel face construction is the bright-point in a game with a polished surface and little substance. Besides that feature, this is not even a product that Microsoft could give away to show off the power of their Kinect 2.0. I’d hedge bets that with the technical and retail failure of this second-party game it made it easier to decouple the Kinect from the Xbox One. While abysmal motion-game failures like the 360's Steel Batallion: Heavy Armor spring to mind, this isn’t quite that bad. That said, Kinect Sports Rivals doesn’t do the hardware any favours and we say buyer beware.