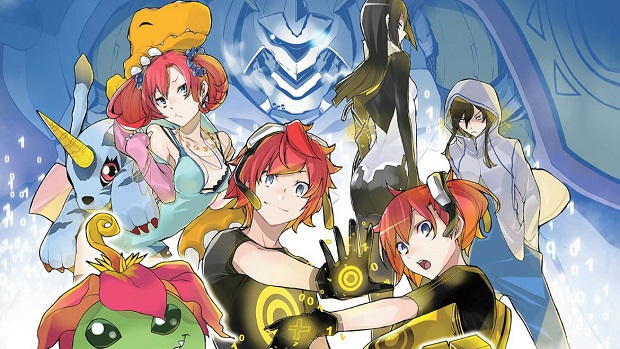 As Digimon Story: Cyber Sleuth boots up, along with the standard developer and publisher credits, a graphic signifying that the game is part of the 15th anniversary of the Digimon animated series appears. Seeing this reminded me of when I was in elementary school and obsessed with the early seasons of the show and had a plush Guilmon hanging out of my pocket on the playground. The rush of nostalgia made me all the more excited to explore the Digital World in Cyber Sleuth and see all sorts of monsters I remembered from over a decade ago, but where the latest Digimon RPG excelled was in the way that it made me feel like the series was growing up alongside me instead of just reminding me of when I was a child.

Cyber Sleuth stars a group of teenagers who meet up in a digital simulation called EDEN. This world acts as a sort of new age social networking platform where people can leave the confines of the real world to meet up in a simulated environment. However, this world isn’t without its share of danger, as hacking groups have made a living out of cyber attacks within EDEN, and competing gangs have started to develop a criminal reputation among users. These hackers, and eventually the main cast, have decided to use Digimon as tools for their bidding, but before these kids have a chance to get caught up in the digital world politics they’re attacked by a hostile lifeform called an “Eater.”

Eaters basically act as collectors of data, and that includes the protagonist’s in-simulation avatar just as they are about to make their escape into the real world. This confrontation leads to the player’s consciousness appearing in a digital form in the real world, allowing them to navigate through EDEN’s network at will and taking up the role of a Cyber Sleuth, a detective who investigates cases within EDEN for both humans and Digimon with the help of some digital monsters of their own.

Cyber Sleuth takes on a lot of story all at once. While the player is solving virtual crimes, they’re experiencing hallucinations of a seemingly forgotten past, a gang war is going on within EDEN, a conspiracy is spreading about the company who runs the simulation, and between all of this Digimon are present as well. All of this does manage to come together eventually, but for around the first 20 hours Cyber Sleuth feels like it’s spreading itself fairly thin. At times it’s hard to discern exactly what it is that the game is focusing on, and Digimon themselves feel almost tangential to the story at large for more than half the game. When Cyber Sleuth’s big picture is finally revealed, it feels like it satisfyingly brings all these disparate elements together, but in the 50 hours I put into the story alone, the first half of it feels like it’s missing its center, which can lead to some confusion and overlap.

But while the overarching story takes its sweet time getting to the point, Cyber Sleuth does have a lot of interesting characters to keep you going until it does. Every person that makes up Cyber Sleuth’s cast, from the driven and energetic Nokia to the enigmatic and angsty Arata, plays a crucial role in this mystery, and seeing them deal with the revelations that come from your work as a detective helps to maintain a sense of direction when everything else seems to diverge off into seemingly indistinguishable directions. Cyber Sleuth is a story of guilt and redemption full of moments of poignancy. This game is telling a mature story between the capturing and fighting monsters, and it’s one that managed to hold my attention up until the very end.

This more mature, if somewhat uneven story shows that Digimon is capable of growing alongside its audience, but it also sets an entertaining stage for the hours of battling and raising Digimon that you’ll do in this digital world.

Cyber Sleuth’s battle system appears on the surface to be a fairly standard turn-based affair, but with some added depth under the hood it makes smart party management imperative, requiring you to pick a wide variety of Digimon to fill up your eleven slots.

There are a lot of aspects of each Digimon to keep track of, as each comes with a base element, but also one of four types: Data, Virus, Vaccine, or Free. The first three act as weaknesses to one another in a Rock, Paper, Scissors fashion, while Free has no weakness but also no advantage. These add another layer of strategy to the mix, as while some Digimon may have no elemental damage over another, their type may give them a slight edge, making it important to carry with you as varied a group of monsters as possible, as your favorites might not be able to handle everything that’s thrown at them.

With over 200 Digimon to obtain within Cyber Sleuth, you’ll be spending the majority of your time raising these creatures into bigger, stronger versions of themselves. Cyber Sleuth’s approach to Digivolution, when a Digimon evolves into a more powerful version of itself, is full of possibilities, and is the most comprehensible and straightforward it’s been in quite sometime, but it is a time-consuming affair that may frustrate all but the most grind-hungry of players.

In order to digivolve into certain higher-level characters, a Digimon has to meet a certain number of requirements depending on which form you want your monster to take. Certain digivolutions are easy to execute, only requiring the most basic of conditions to be met, while others require specific stats to be at a certain level, some of which are unattainable by conventional training and have to be reached through use of boosting items, none of which are for sale at shops or reliably available in any way other than the occasional treasure chest. Other limitations include a level cap that most Digimon have that can only be surpassed by de-digivolving a character to a lesser form and going through the grinding process again, meaning you’ll often end up training the same Digimon several times over in order to get to the strongest characters.

While the act of level-grinding is fun, and finally obtaining a Digimon you’ve dedicated a lot of time to trying to reaching is always satisfying, Cyber Sleuth’s recycling approach to training can often be tedious and halt progress for hours at a time.

As you’re traveling through cyberspace, you’ll find yourself accumulating a great deal of Digimon through your travels, but they luckily don’t have to be neglected if you’re not using them in your field team, as they can be left in a lab where they will steadily gain levels over time. This method isn’t as effective as taking them out and training them against wild Digimon, but it does mean they’ll be somewhat more viable should you choose to bring them along on your adventures. It does require some upkeep, however, as Digimon will reach level caps while you’re not paying attention, and need to digivolve in order to best use your time.

Proper use of the lab will give you a constant feed of new Digimon to train, meaning you can spend dozens of hours trying to get them all. Cyber Sleuth does a great job of supplying you with means to expand your collection of Digimon, even if it is often held back by the self-imposed restrictions of the level caps and limited means of raising stats.

Luckily, Cyber Sleuth does give you some tools to spice up the grinding with its huge collection of sidequests. As a detective, you’ll be solving a few dozen cases for prospective clients, some of which will lead to new areas and new Digimon to encounter. These quests help show Cyber Sleuth’s tonal range, as some of them portray some heavy subject matter like a Digimon helping youth cope with cyber bullying, while others play on the most absurd possibilities in a world where people can physically interact with a server, like going into the internet and taking out a Digimon who was getting too excited behind the keyboard within the in-universe representation of Wikipedia. Cyber Sleuth constantly adapted its gameplay loop and own isolated lore in ways that were consistently smart and surprising, and it made each side quest exciting to see through in order to see how it would use a Digimon or everyday situation to tell endearing and memorable side stories.

Digimon Story: Cyber Sleuth is a game that constantly surprised me in how it felt just as intriguing to me as an adult as the original animated series was when I was a child. It’s nice to see the franchise not resting on its laurels and finding new ways to present its ideas to an audience who has grown up and needs a bit of mystery, angst, and depth to its Digimon experience. Cyber Sleuth feels like Digimon for the series’ oldest fans, but one that is aware that its fans are a little older and a little wiser than they used to be.

Cyber Sleuth evokes nostalgia while also pivoting in tone and setting for fans who have grown older. The disorienting lack of story direction in the first half is made up for when its mysteries finally come to light, and it makes Cyber Sleuth's world a great one to spend hours training Digimon in.