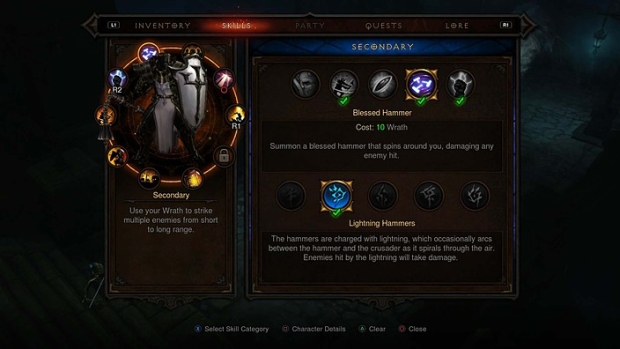 Yes. Absolutely yes. It’s the simplest answer to the deluge of questions I’ve had over the last few days when people have seen that I’m playing Diablo III: Reaper of Souls – Ultimate Evil Edition on my PlayStation 4 and they want to know whether it’s worth picking up. Some folks have slain demons on the PC, some have only hunted the Lord of Terror on consoles, but they all want to know if Diablo III retains its crown as The Dark Lord of the Couch. Hell yes it does.

If you think back 11 months (or you’d care for a refresher) you might recall that my review of the Xbox 360 version praised the game for the new radial menu system, pick up and play mechanics, and for just how seamlessly the cooperative play worked. Diablo III on the PC picked up an update and a slew of new features including Adventure Mode, Loot 2.0, the Crusader class, a fresh chapter to continue the story, and a devastatingly-powerful antagonist in Malthael with the expansion pack this past March. With the closure of the Auction House, and all of the upgrades in the new loot system, Reaper of Souls felt like the Diablo III that team Blizzard wanted to make when the game first launched. The only hitch I found with the expansion pack on PC (again, a refresher right here) was that it was stuck behind the always-on DRM – something that seems unnecessary now that it no longer protects the real-money Auction House. Could a move to the PlayStation 4 combine everything that was right with the Xbox 360 version, and the stellar updates brought by Reaper of Souls on the PC to live up to the Ultimate Evil Edition tag they’ve stuck on the box?

There really isn’t a laundry list of new features in Diablo III: Reaper of Souls – Ultimate Evil Edition for the PlayStation 4, but that isn’t to say it is bare bones by any stretch of the imagination. The first thing you’ll notice is that the game runs at an absolutely gorgeous 1080p resolution and at 60 frames per second on the PlayStation 4 and on the Xbox One, leaving no appreciable difference between them in terms of graphical presentation. If you’ve pre-ordered the game you’ll pick up a set of Infernal Pauldrons, and you’ll get a nifty Legendary ring for linking your Xbox Live or PSN accounts with your Blizzard account. On the PlayStation 4 you’ll also get an exclusive Nephalem Rift (special adventures once you’ve beaten the game and unlocked both the rifts and Adventure mode) that is inspired by Naughty Dog’s The Last of Us, featuring Clickers, Bloaters, Stalkers, and a thick yellow spore funk that permeates the level. In another nod to one of Sony’s incredible franchises, you can also use the transmogrify system (it allows you to change the appearance of a piece of armor) to shift your favorite gear to the “Guide of the Colossi.” This changes your armor to look like a blend between Valus, Malus, and Gaius.

Also specific to the PlayStation 4, you can use the touchpad on the DualShock 4 to select equipment and powers from the console-specific selection wheel. It also is used as a giant button to reach your inventory. Ultimately, this feature didn’t see a lot of use, and, before too long, both my wife and I were using the thumbstick for selection like we did on the Xbox 360.

There are several additional modes that help bring new players into the fold. It’s likely you have friends who will be importing their high-level characters (you can bring them to and from pretty much any console version, but not to or from PC/Mac), and you might be completely new to the game. The new Apprentice Mode will automatically boost the stats of lower level characters so they can play with higher level toons and not get slaughtered. This lasts just for the duration of that game, but it does mean you can jump right in with friends of any level.

The import system wasn’t available for me to bring my console characters across (it’ll be ready by the time you read this). So, with a shrug, my wife and I happily started new characters. Characters, Paragon levels, loot, and everything else will carry across from the console versions, regardless of generation, but my Xbox 360 characters were just level 50 anyway, so no huge loss. To help with levelling, the Blizzard team gave us all a reason to smash all the things with a new system called Massacre Bonuses. Destroying a handful of destructible objects in an environment in a row will pop a message telling you that you just received a bonus to your character speed, reflected by streaks streaming from behind your toon. Similarly, crushing a cadre of demonic denizens will yield you a multiplier to your overall experience. Coupled with Nephalem Glory bonuses like double damage that can be extended by picking up more orbs, the game feels fresh again, even though I just played through it less than half a year ago.

To prevent ninja-looting in multiplayer games (especially those precious Legendaries), the game now automatically round robin distributes loot, alternating through the party roster to ensure everyone gets a fair chance. That said, Loot 2.0 also plays a part, giving players gear appropriate for their classes most of the time. You are free to trade, of course, but this balanced system keeps everyone honest, and seems to provide a solid amount of loot without overwhelming the game.

The final addition to the recipe is a system called Nemesis. It wasn’t quite ready to go during our play time, but I’m told that it allows a bit of retribution or redemption. If a creature defeats you, that creature will then appear in the game of somebody on your friends list. When the creature arrives it’ll have additional powers, making it even stronger. If it kills your friend, it will grow stronger and head onto another friend until it is either defeated or slaughters five of your allies.

Rather than joining a friends game and dropping loot on the ground like the original Diablo, you can also use the in-game mailbox to ship goodies to your friends. While most Legendaries remain Bind on Account, some can now be mailed – all the more reason to keep an eye on that mailbox.

There is only one aspect of Diablo III: Reaper of Souls – Ultimate Evil Edition that doesn’t quite live up to the monicker. Act 1 went without a hitch, but in the Sewers of Caldeum  we saw a few instances with two players playing local co-op where the framerate dipped for just a moment.  It popped up just a few more times through the rest of the game.  It was nothing impactful, but it stood out against the otherwise silky-smooth framerate. Additional players didn’t seem to have an impact beyond the short dips I mentioned above, so this could end up being something that Blizzard might be able to diagnose and patch out entirely.

With only a single nitpick, and so many fantastic upgrades, Diablo III: Reaper of Souls - Ultimate Evil Edition truly is the best version of the game, PC and Mac included. Couch co-op with up to four players, online co-op with up to four players, an upgraded system beyond Loot 2.0, better round-robin gear distribution, and all of the social elements added to this version of Diablo III are icing on the cake of the additional chapter and Crusader class delivered here. So yes...it’s worth the double dip. If this is your first foray into the world of Diablo, this is the absolute best version you can play.