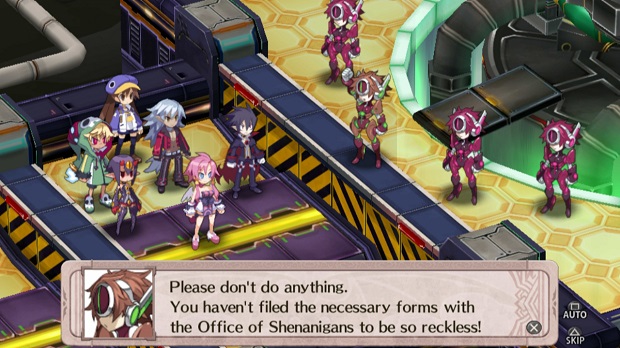 I never got around to playing Disgaea 4: A Promise Unforgotten when it came out on the PlayStation 3, so when playing the Vita re-release, Disgaea 4: A Promise Revisited, the main thing that stuck out to me was the game’s ability to forgo typical JRPG tropes in favor of quirk and charm. The game’s evasion of the common melodrama proves to be the game’s greatest strength, because it’s this endearing characterisation and humor that holds the game on its shoulders even in its early hours of nonsense and simplicity.

Disgaea 4  is the story of Valvatorez, a vampire, former tyrant and self-proclaimed sardine enthusiast. Valvatorez, alongside his werewolf assistant Fenrich, have been damned to the underworld with the undesirable task of being a Prinny Instructor. Valvatorez trains forces of penguin-like Prinnies before they are sent to the Netherworld. As their instructor, Valvatorez claims that he will give each of the Prinnies a sardine for completing his course when they are abruptly abducted. Valvatorez’s honor and desire to keep his word to the Prinnies leads him on an adventure to save his students that unravels into something much bigger.

Valvatorez is a strange guy, but he, the cast and the story are always humorous and silly. The game has a propensity to fall too far on the side of cheese every now and again, but Disgaea 4 doesn’t take itself too seriously in the first place. The game is infectious, and it plays it up in all the right ways. It only gets out of hand when you come across a character with an awkward vocal delivery.

A Promise Revisited’s strategy RPG gameplay starts off easy and accessible. Its streamlined and simplistic early, and paces mechanics well as the game progresses. The game’s surface level simplicity is emphasized by the game’s ease in its first hours. Disgaea 4 is forgiving and doesn’t push players out of the nest with too much to balance at a time.

If you’re looking for an incredibly deep strategy game, whether Disgaea 4 is going to be the game you’re looking for or not isn’t readily apparent at the beginning. There’s depth in how battles can progress, but not so much in how they’re executed. The game’s battles are round-based, meaning that players can stack commands across their entire team and execute them in large waves. This gets things done in one fell swoop but in doing this, players also risk being unable to respond to a counter attack. More cautious and strategic players can still initiate individual orders one at a time, which can allow them to adapt to unexpected turns in the battle after a wave of commands.

Disgaea 4’s large range of options is where the combat gets deep. There are dozens of classes for you to make up your team with, and diversity within that team is key to being effective in battle. There are your standard tanks, mages and rogues, but ensuring that they play in tandem is the key to winning battles. Certain characters are capable of augmenting others’ attacks, and it can be the difference between damaging an enemy and taking them out. Simply attacking with one character while another character is standing next to them can change a simple strike to a spectacular team-based attack.

A Promise Revisited is a re-release of the original Disgaea 4: A Promise Unforgotten for the PlayStation 3. How does the game stack up on Vita? Pretty well, actually. The game looks lovely on the handheld, with gorgeous and crisp sprites, even if the character design does leave something to be desired. The Vita version also comes with some bonus content, primarily the original PlayStation 3 version’s DLC. While there’s not a lot here worth double-dipping for if you had the PS3 version, there’s enough content for newcomers to gravitate to it as a definitive version considering the amount of extra content it has for the price.

Disgaea 4: A Promise Revisited is quirky, endearing and is a great value considering the price and content that comes with it. It’s got a less than grabbing start and might take awhile to get its claws into anyone looking for something overflowing with depth, but Valvatorez’s story is genuinely entertaining and full of heart, and that alone makes the game worth trying.

Disgaea 4 is charming and light-hearted with a fun battle system with depth that is less on the surface than some might be looking for. If you've never played it before, the price and content packed in make the Vita version the right choice for those looking to try it out.