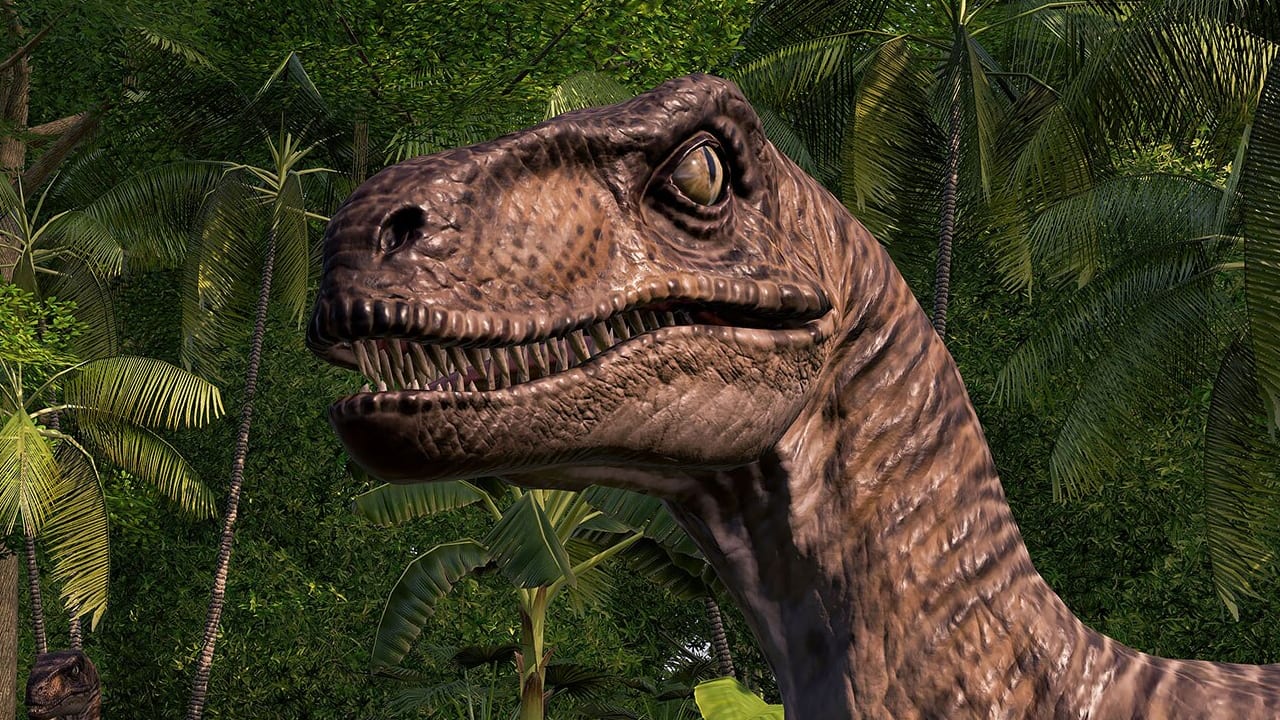 Michael Crichton’s Jurassic Park books aren’t really about dinosaurs. Sure, they feature the lumbering beasts, but Jurassic Park has always been about the hubris of man and their ill-advised attempts to control nature. We continue to irresponsibly use our superior technologies to lull ourselves into a false sense of security, and the inevitability of the outcome is practically guaranteed. We return to the aptly-named Islands of the Five Deaths off Costa Rica — welcome back to Jurassic World.

We reviewed Jurassic World Evolution back in 2018 on PC (our review) and enjoyed it quite a bit. The light simulation of building your very own dinosaur park granted us the opportunity to make our own costly mistakes as our angry raptors rampaged our visitors, and we even sold a few dinosaur T-shirts in the process. Profits are important — we can always get more guests. Now, Frontier is bringing the game to its most surprising destination — the Nintendo Switch.

Putting a game as detailed as Jurassic World onto a platform with just 1.02Ghz of processing power, 768 MHz of GPU when docked, and somewhere between 307 and 360 MHz when on the go. If you are doing the math, that’s around 393 GFLOPS of combined power at home, or 236 in handheld configuration or when using the Switch Lite. By way of comparison, the Xbox 360 had 240 GFLOPS of power when it launched…in 2005. To say that this would be a challenge would be a severe understatement. Surprisingly, despite all obstacles, they’ve managed to do exactly that.

Obviously, the game will look its very best when docked as it’ll have the most amount of power at its disposal. We see that bear out in practice as the game looks fairly close to its larger console counterparts. Dinosaur details look sharp and clear when you zoom in closely, the musculature flexing as they stalk around their insufficient pens. The aviary shadows cast their bars down on the Pteranodons contained therein. Overall, it’s a very solid execution against some extraordinarily tight power constraints. That said, it’s not without its concessions.

We are waiting for an official response on the framerate and resolution numbers, but suffice it to say there is a marked difference between the two. Most of the time the framerate stays out of the visual hitching range, but as the amount of dinos adds up you may see some framerate wobble. Thankfully it’s momentary and resolves itself just as quickly, but it is present. The visual fidelity between docked and undocked is very noticeable. While the detail appears to be there, it’s hidden underneath a more blurry presentation when out of the cradle, as you can see in the image below. 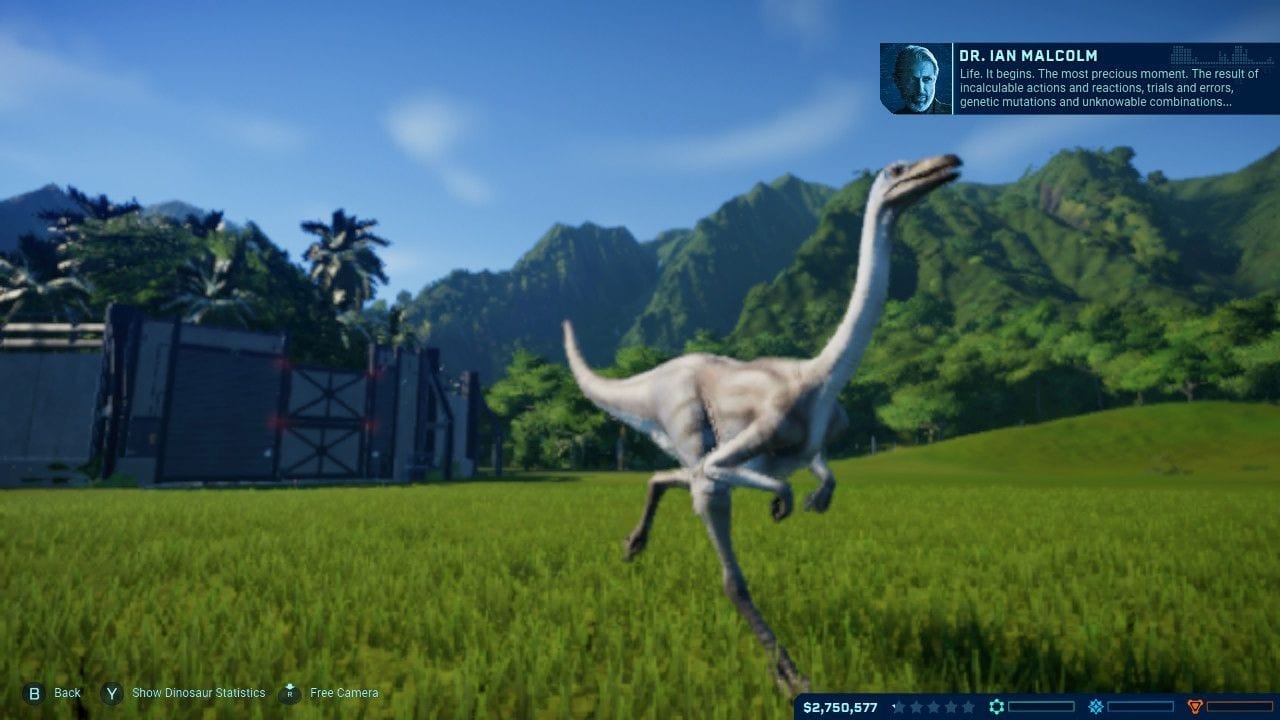 Docked or undocked, vegetation pop-in is frequent. It’s certainly a lot to juggle, given that your veggie-saurus types will need something to munch, but it does break immersion a little bit. There is also a bit of aliasing on the edges of angular objects like buildings when undocked. These mostly appear as a shimmer and jagged edges while rotating the camera. Put simply, the system lacks the oomph to be able to run anti-aliasing. Still — it’s a small sacrifice to be able to run your dino asylum on the go.

If there’s one area where a lot of portables fall down it’s in the scale of the user interface. I was happy to see that not only does the UI scale perfectly to a large screen TV, it’s easily readable on the small screen as well.

The three major expansion packs are included in this Complete Edition. Return to Jurassic Park takes us back to where the series began in a bid to rebuild the island with the help of Dr. Grant, Dr. Sattler, and Dr. Malcolm. Clair’s Sanctuary tell’s Clair Dearing’s story as she tries to save the dinosaurs that remain stranded on Isla Nublar after the events of Jurassic World. Secrets of Dr. Wu puts you in league with the scientifically-unrestrained Dr. Wu who continues to push past any and all ethical boundaries in his relentless pursuit of hybrid dinosaurs. When you kick off the game you can jump to any of these, or the original campaign as you see fit. Beyond the three major expansions, you’ll also get the Herbivore, Carnivore, and Cretacious dinosaur packs, as well as all of the dinosaurs included in the Deluxe Edition of the game.

I’ve captured a bit of the game in docked mode, playing Clair’s Sanctuary. You can watch me struggle to keep my dinos in their cage long enough to do anything useful — enjoy!

In point of fact, the game is a 1:1 replication of the PC version in terms of content. That means you’ll be dealing with Dr. Kajal Dua for your science division, Isaac Clement for your Entertainment Division, and George Lambert handling the park’s security. You’ll work with all of the doctors from the original game, as well as Dr. Wu, Claire, and Owen from the newest installments. The same content structure exists, so those same people will occasionally offer up some ethically dubious challenges — that hasn’t changed.

Like the other versions of the game, you’ll spend your time, energy, and money researching new dinosaurs, selling merch, and creating new holding pens for your dino friends. I’m not looking to rehash my previous review, but all of that park building goodness is here. Thanks to having already launched the game on Xbox One and PlayStation 4, the user interface has been adapted to a controller. While you don’t use the touchscreen elements of the Switch at all, that doesn’t stop this from being a solid interface for the game.

Speaking of a solid interface, other sandbox-style games from Frontier sport building and terrain deformation, and Jurassic World is no exception. Some dinosaurs enjoy more foliage than others, and some expect large expanses of water for their habitat. You’ll need to push and pull on the terrain to make this work. I fully expected that this would be the heavy-math calculations that would tank the Switch, but I’m surprised to say that isn’t the case. No matter how much digging, building, resurfacing, or tree-plunking I did, the Switch took it all in stride. I cannot overstate how challenging this must have been for the team, but they somehow pulled it off. Well done.

I’ve had several opportunities to take my Switch for extended waiting periods these last few months. Waiting in my car for doctor’s appointments, standing in line to cast my vote, and hanging out on my lunch break are just some of the many times I’ve taken my dinos on the go. Each time I’m wowed at what Frontier has accomplished on such a limited hardware power budget.

Jurassic World Complete Edition is a technical marvel on Switch. Delivering everything in a single package, this version of the game carries with it all three expansion packs, and all of the optional dino packs, making it the most complete version to date. While the undocked version is slightly lower fidelity, it’s a small concession for being able to build your own ill-advised dino park on the go.