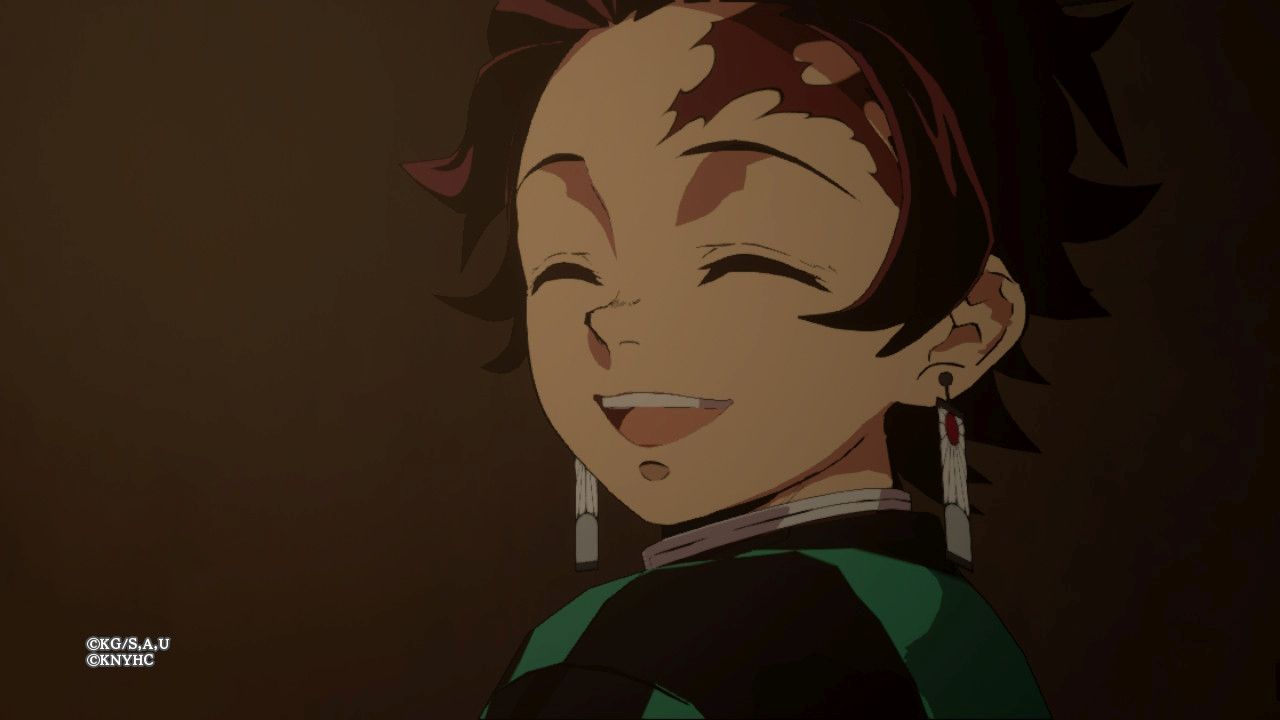 How far would you go to return a loved one to humanity? In Demon Slayer -Kimetsu no Yaiba- the Hinokami Chronicles, you’ll follow the story of Tanjiro Kamado who returns one day from selling charcoal to find that his family has been slaughtered and the only survivor, his sister Nezuko, has been turned into a demon in the process. Tanjiro must now embark on a perilous quest to avenge his family and to find a way to turn Nezuko back into a human. It’s time to become the blade that slays demons.

Demon Slayer has to be one of the most heartfelt, gut wrenching, and emotional stories I have ever come across in recent years, nothing really compares. There are heavy themes of family, relationships, and meaningful bonds throughout that even tug at the player’s heartstrings, even though we could never fully understand the gravity of the whole situation. There was an entire sequence in the game that I struggled to hold back my tears as Tanjiro forces himself to keep pushing forward, trying hard not to look back at what was and instead looking to what could be. It’s no wonder why it became so popular, drawing in so many. 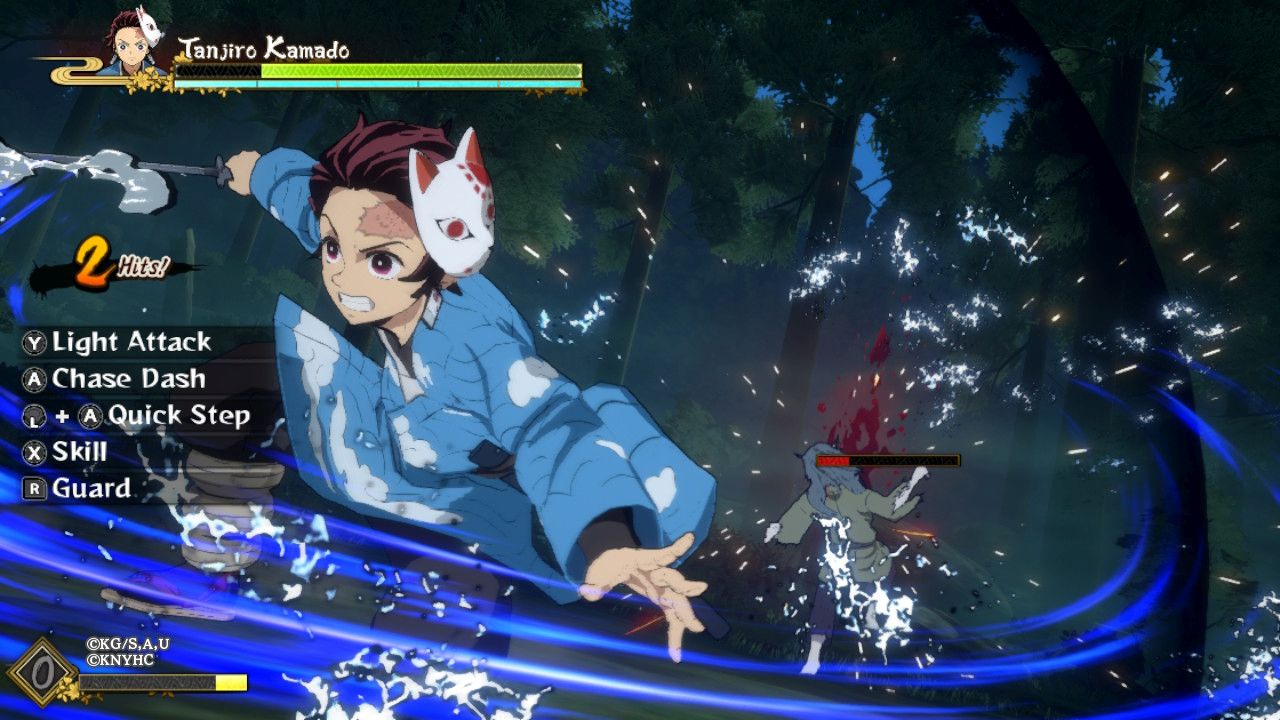 The cast of Demon Slayer really helped to make the story. Original voice actors for both Japanese and English voices have reprised their roles for authentic portrayals of the characters. Tanjiro is a kindhearted young lad, always willing to lend a helping hand where he’s able, always taking others into consideration, putting people before himself. His two companions, Zenitsu and Inosuke, add more flavor with their own very different personalities; Zenitsu is a scaredy cat most of the time, jumping at the smallest noises, until he falls asleep, while Inosuke is a typical macho man character, although he does appear to have a soft side as well. Throughout the game you’ll meet so many different characters, each with their own very unique and quirky personalities, and each getting stranger than those before. And then there’s the demons. The demons come in all kinds of shapes and sizes, having different abilities that you’ll have to navigate. What I loved is that the creators gave the demons a real personality as well, outside of their maniacal “eat all the humans” demon tendencies. Every demon you defeat has a story that ties in to the kind of demon they became. Remember, they were once humans too.

What Demon Slayer excels in with the story it unfortunately lacks in gameplay. First off, most of the game is cinematics which are kind of fun to watch, but I do wish that I actually got to play more of the game instead of watching most of the game. There is a little exploration, if you can really call it that, but it’s very straight forward and short lived before you are launched into another cinematic and then eventually into a battle sequence. The game is a real-time arena fighter with very simplified battle mechanics — there’s really no combos that need to be memorized and perfected, you’ll mainly just be using the ‘X’ and ‘Y’ buttons for your attacks, ‘A’ for dodging/dashing, and ‘B’ for jumping. You do charge up a gauge for special abilities and, in some fights, you’ll even have a companion fighting alongside you. You can quickly switch which character you are controlling or just do a quick press of ‘L’ to have them jump in for a quick attack before they dash away. This definitely came in handy if one character’s health would start to drop. Thankfully, though, if your health is depleted, you are able to still ‘continue’ the fight, you just can’t get the top rank at the end of the fight. 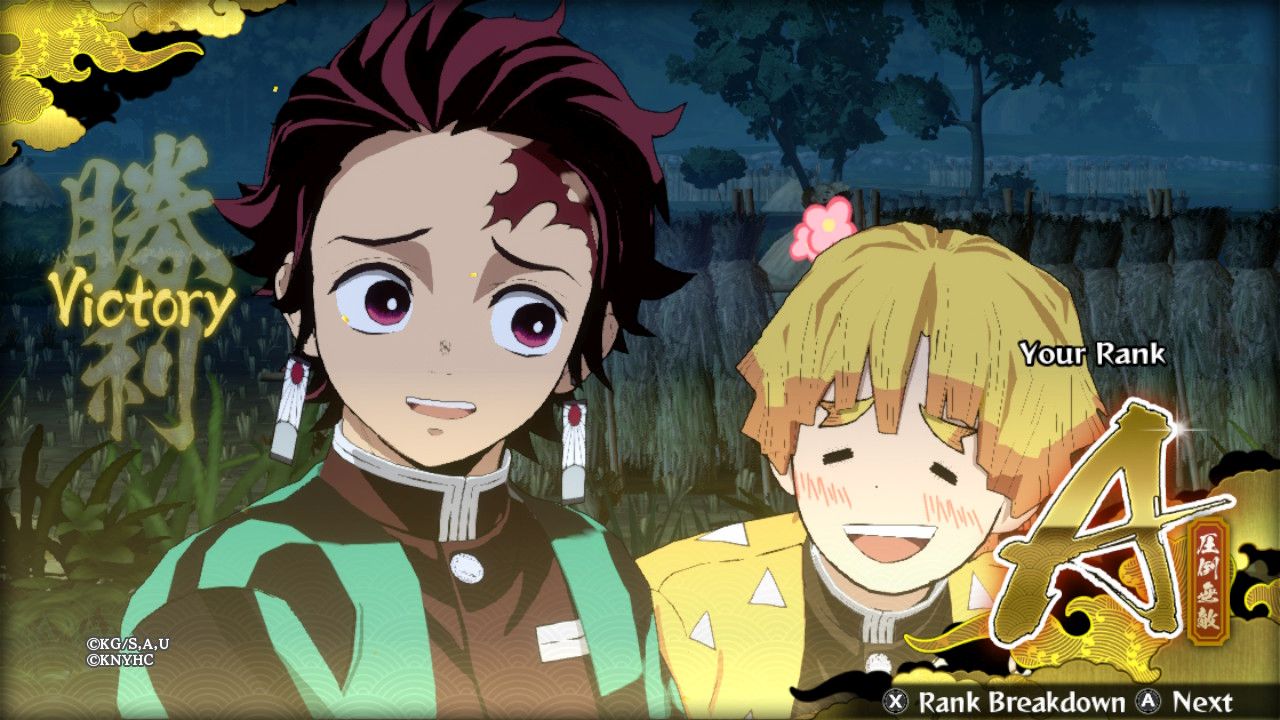 That’s right, every fight is given a grade, or ‘rank’. You are judged on different criteria and assigned a rank depending on how well you did in those areas as well as whether or not you had to use a ‘continue’ at any point. You are judged on the length of the fight, your remaining health after the fight’s conclusion, as well as the usage of special skills, Ultimate Arts, and boosts. At the end of each chapter, you are given a final rank for that chapter based on how your fights went and if you also completed any mini challenges during the chapter. Challenges would be like talking to townspeople to gather information and investigating clues. Throughout each chapter you are also on the lookout for Memory Fragments and Kimetsu Points. Memory Fragments are little cinematics that you can watch after completing a chapter to sort of fill in the gaps in the story or to even get a little backstory. Kimetsu points are collected to unlock different profile customizations and fighters for the Versus mode, which we’ll come back to later.

One thing that got really old really quickly was the awkward loading screens. I would be in a cinematic for all of thirty seconds and then the Demon Slayer logo would pop up on a black screen as the next part of the game was loading. I haven’t played the Xbox or PlayStation versions to know if this is the same there, but it would be nice if the game could just continue seamlessly, especially in situations where the cinematic was Tanjiro simply walking up on the next demon to fight where the camera angle even made it look like the fight was just going to start right then. But instead the screen would fade out and then come back to the actual fight sequence. There were also a few times where the game would take random pauses. They generally lasted for a fraction of a second or so, but it still made for a slightly disjointed experience.

Once you’ve had your fill of the story mode, you can jump over to versus mode to test your demon slaying skills against other players in PVP. Those Kimetsu Points you picked up throughout the game can be redeemed in the Rewards menu for different voice lines for each character, different costumes, profile customizations, and, of course, different fighters to unlock. Go head to head with other players in battles both online and locally with characters not only from the anime, but the series’ official spinoff as well. 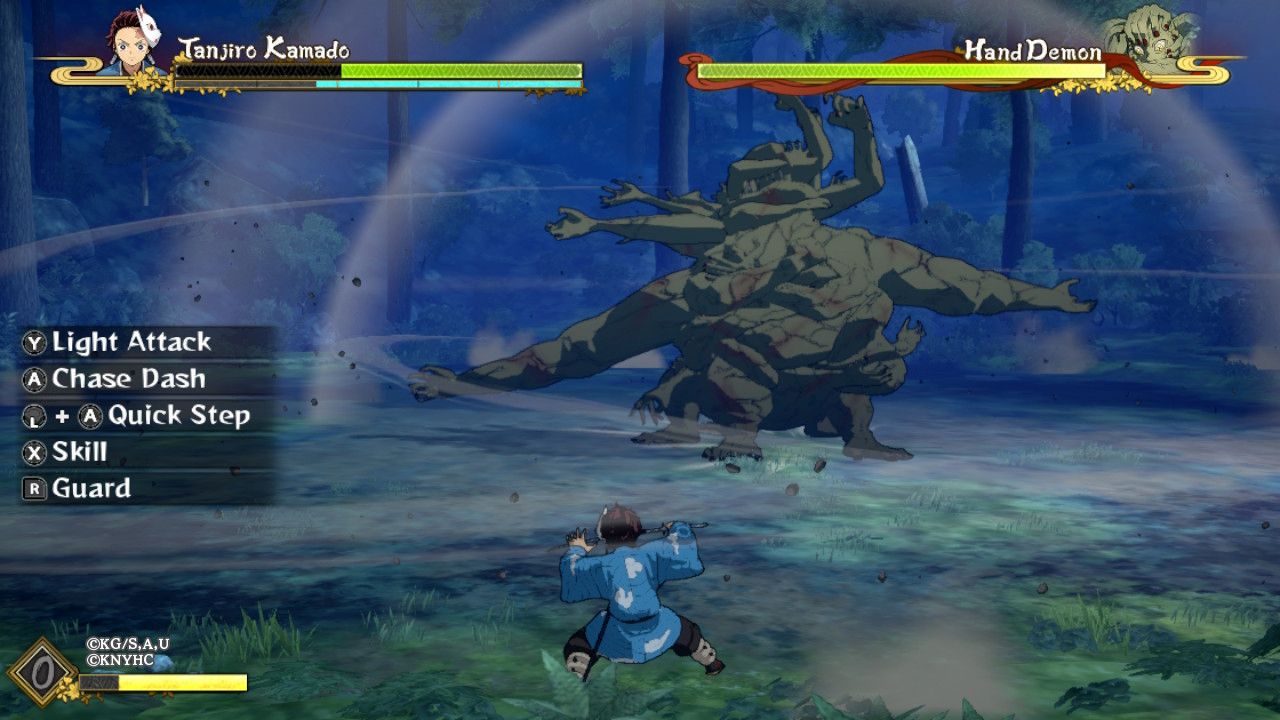 Overall, my experience with Demon Slayer -Kimetsu no Yaiba- the Hinokami Chronicles was a pleasant one. I greatly enjoyed the story and I am looking forward to its continuation, though hopefully with more actual gameplay in place of cinematics. Hopefully the battle system will also get some more attention to spice it up a little. Aside from the boss fights, the combat itself was pretty easy compared to other fighters I’ve played.

Cassie Peterson is an Editor for Gaming Trend but also a sporadic content creator and exceedingly average Rainbow Six Siege player. She goes by MzPanik on Twitter and Twitch and all of the gaming platforms.
Related Articles: Demon Slayer - Kimetsu no Yaiba - The Hinokami Chronicles
Share
Tweet
Share
Submit