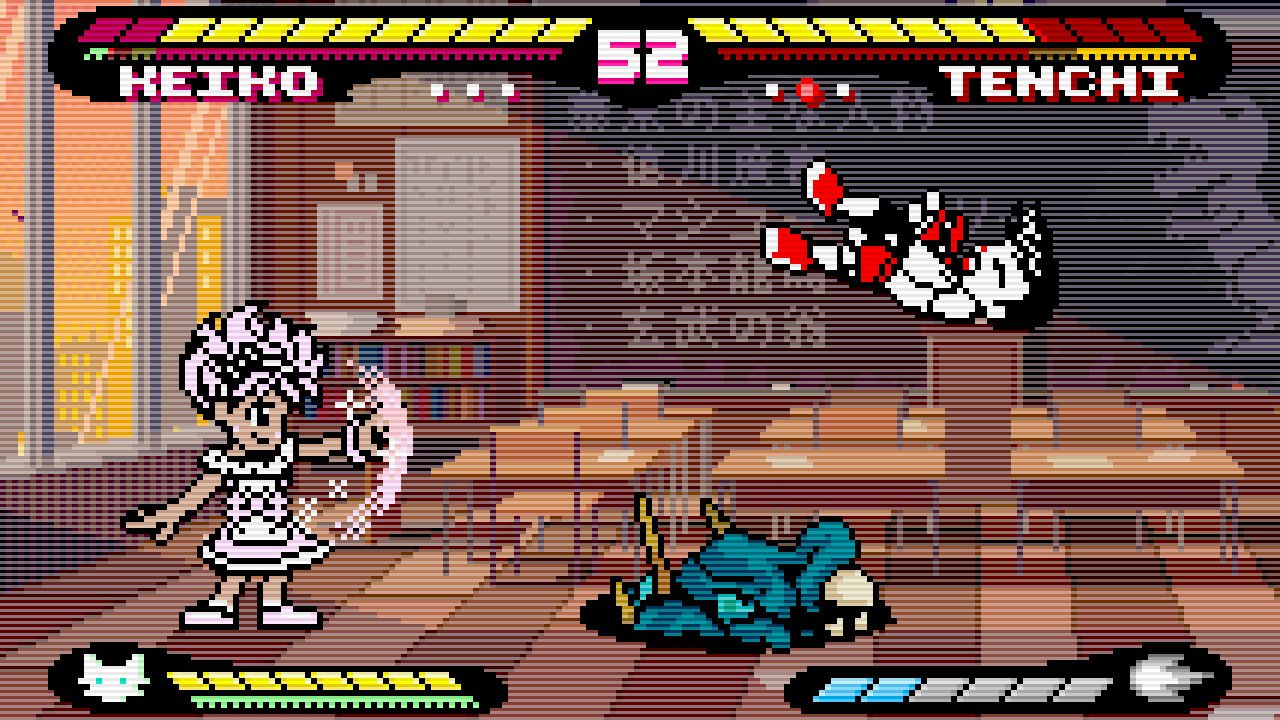 I have a confession to make: Pocket Rumble was my most anticipated independent game at the time of the Nindie Direct last year (predating the Switch, even!) It looked like a slick 2D fighter, and I wanted to dig into it after the console launched. However, there were numerous delays preventing the release to the console, and even with the PC release getting some updates, the Switch version was delayed for months. Finally, after a year of waiting, the game is finally out, but with some fierce competition in recent months, is this worth picking up?

Pocket Rumble is a 2D fighter that has an aesthetic that harkens back to the Neo Geo days, also known as the SNK era. Battles are one-on-one bouts with eight different characters as they duke it out on a variety of different stages. What separates the game from its fighting contemporaries, however, is in its simplistic and accessible fighting system. Players will control the game with only two buttons (a light and heavy attack) and an analog stick, with special moves stemming from meters or simple directional inputs. In addition, each fighter has 12 health points, and each hit takes one health point away. In addition, chip damage is prevalent, and getting hit twice consecutively while blocking will take away a health point. The first to deplete their opponent’s health (or whoever has the most health by timeout) will win the round.

The current roster consists of eight characters, which all vary wildly in playstyle. Tenchi is your Street Fighter-esque character, with standard Hadoken-like special attacks and meter, and is a good all-around character for beginners with zoning and close-combat options. On the other side, you have fighters like Subject 11, a grab-heavy monstrosity that utilizes a shield meter (block enough attacks and you can nullify another one) and Keiko, a long-range puppet fighter who uses a cat which turns into a mutated… thing.

This select screen is one of the best parts of the game.

Each fighter has strengths and weaknesses, though there are some characters that are difficult to use due to the aggressive and quick-paced nature of the game; Hector is a sword-slinging samurai that will lose health with most attacks (but can heal), which is a problem considering each health point is necessary to succeed, Parker is also rather tricky, as his moves involve precise placement of electric orbs and perfect parries. I really loved these character designs, and they are a highlight of Pocket Rumble.

However, while the character designs are unique and look very pretty as a whole, the rest of the game’s presentation is lacking. For one, none of the characters have any backstory or dialogue, which is a shame because of the potential that the setting allows. All of these fighters are distinct from each other, and even the character select screen hints at this, with different intros playing when you select a fighter. There’s no real story or narrative that occurs, and while fighting games usually put the story on the side-burner, here it’s nonexistent. While the game runs very well (transition time from character select to battle is almost zero), there isn’t anything that signifies flow. No fighting dialogue, no announcer, even the ending screen just pops up out of nowhere. While the game does have an arcade and career mode, they’re basically identical since there is nothing to differentiate the modes other than fighting all eight characters in the former and an arbitrary ranking system for the latter. I wish that future updates would at least have bosses, because that would be a neat throwback to the Neo Geo fighting games.

The gameplay itself is rather shallow, even if it masquerades itself as an accessible system. While other games like Skullgirls and Divekick have deceptively simple gameplay that has a presence in the competitive scene, Pocket Rumble’s simple inputs get stale after a while. Because there aren’t that many advanced techniques within the game, your moveset for all characters feels restrictive, with only four or five special moves available for each character (depending on if your meter acts as an offensive technique).

While games like Smash and Brawlout have something similar with its movesets, they also have advanced techniques that players of all experience levels can use. Pocket Rumble feels like a one-trick pony, and the lack of stage variety and moves are rather disappointing. Even Skullgirls, which had an initial roster of eight characters as well, stood out due to its “easy to play, hard to master” philosophy that caused me to spend a couple hours just playing with one character at a time. There’s no apparent skill level to progress, so fighting game veterans won’t find much to enjoy. On the other hand, beginners will get schooled by those that can use their exploited moves better, and that’s the worst of both worlds.

That being said, I do have to give the game credit for its online mode. For the few matches I played, I had no trouble with connection, and because of the simplicity of the game, even matches with lag weren’t too troubling, and it just felt that the game was slower rather than broken. The multiplayer modes are an admittedly good time for those just looking for a casual fighting game, but those expecting a meatier experience should look elsewhere.

After a year of delays, the Switch version of Pocket Rumble unfortunately disappoints on multiple levels. While it has a distinct art style and some great multiplayer options, the overall lack of content and limited moveset hinder the game’s true potential.

Elisha Deogracias is an aspiring accountant by day, freelance writer by night. Before writing for Gaming Trend, he had a small gig on the now defunct Examiner. When not being a third wheel with his best friends on dates or yearning for some closure on Pushing Daisies, he's busy catching up on shonen manga and wacky rhythm games. Mains R.O.B. in Smash. Still doesn't know if he's a kid or a squid.
Related Articles: Indies, Pocket Rumble
Share
Tweet
Share
Submit