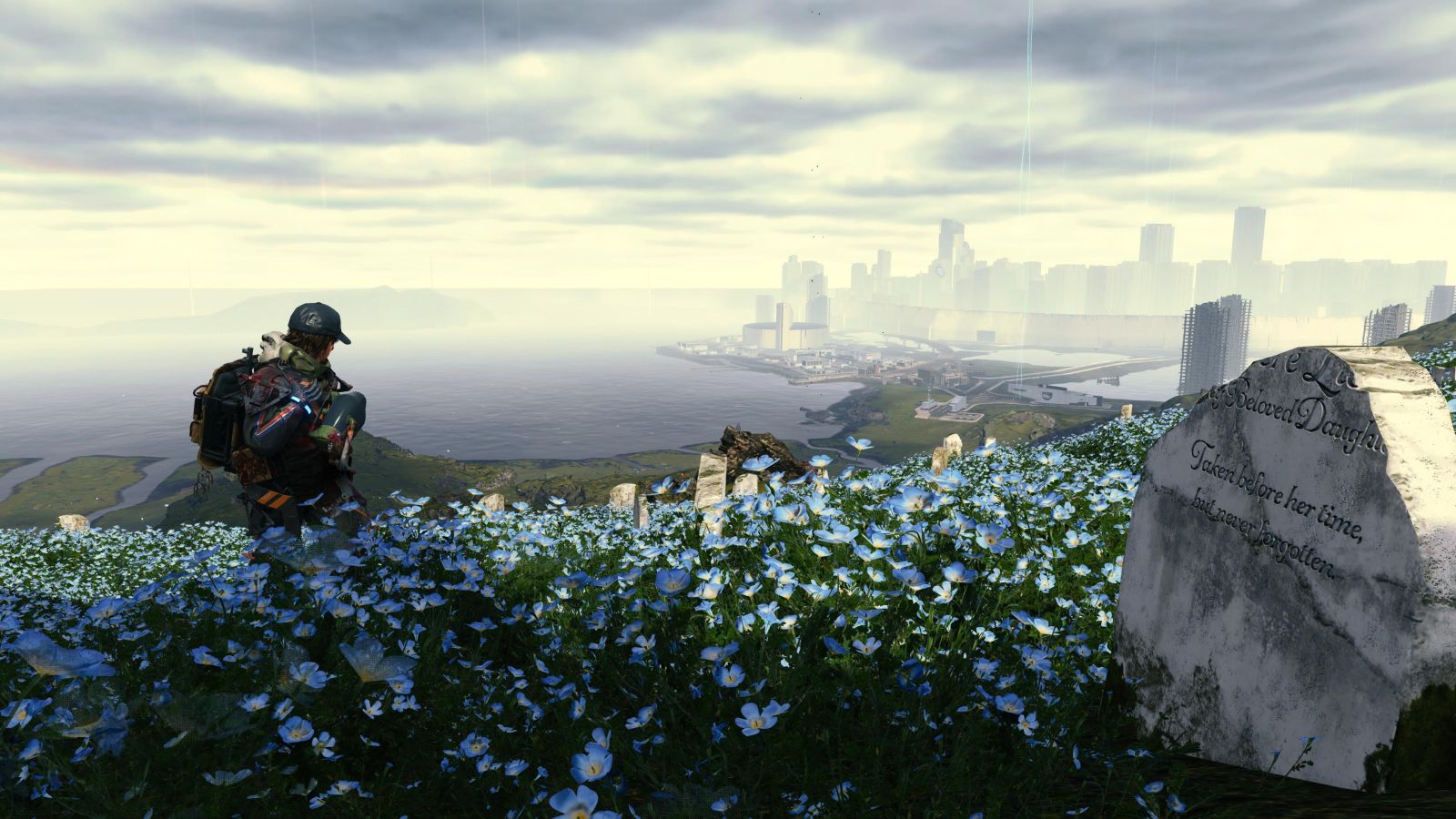 There really isn’t another game out there like Death Stranding. Sure, it’s not for everyone, but its focus on simple movement and navigating terrain, as well as various hazards, makes it stand out among the so-called “walking simulator” genre. That, and of course the game’s gigantic production value with a massive world to explore and several hours of licensed songs. It’s clear everyone who had a hand in crafting this unique experience was very passionate about their work, not just the auteur director Hideo Kojima. The game is one of my favorites of the last generation, and now fans can experience it all over again in Death Stranding: Director’s Cut on PS5. You can read our original review here, as here we’ll be focusing mostly on what’s new and different in this version.

Death Stranding follows Sam “Porter” Bridges (Norman Readus) as he reluctantly reunites a post-apocalyptic America through mail delivery. You start off carrying packages in your backpack while avoiding MULEs and BTs, but eventually, you’ll have access to a vast network of tools to make your journey easier like vehicles, bridges, roads, ziplines, and more – all created by you or other players. Director’s Cut adds a few new gadgets to help you get around, most notably the Cargo Catapult. This device allows you to load up cargo, and fire it a great distance causing no damage to the items – so long as you deploy the parachute before it hits the ground, that is. Another bridge type has been added, a laser bridge that MULEs can’t use but doesn’t work under certain conditions like Timefall. You unlock these and more naturally as you progress through the game by completing new missions specifically for Sam.

These new missions actually add more of something that was pretty rare in the base game: corpse disposal and body transport. I always found these missions interesting, since you can’t carry anything besides the body in your backpack, so you have to either travel light or make use of other methods of transportation like the floating carrier, a vehicle, the cargo catapult, or Buddy Bots. Buddy Bots can actually follow you around now, but they’re not very reliable as they tend to take very strange routes and don’t seem to like bridges. Since heavier loads, like bodies, make you lose balance more easily, you have a few new tools to combat that as well.

In addition to the usual backpack customization, there are new attachments like a stabilizer, which automatically helps keep your balance, and patches that are purely for decoration. The backpack isn’t the only piece of gear with shiny new features, there are new suits, sunglasses, and hat colors, BB can even get in on the action with a bunch of new skins for his pod like wood grain or one covered in stickers. Gotta keep your baby lookin’ stylin’. 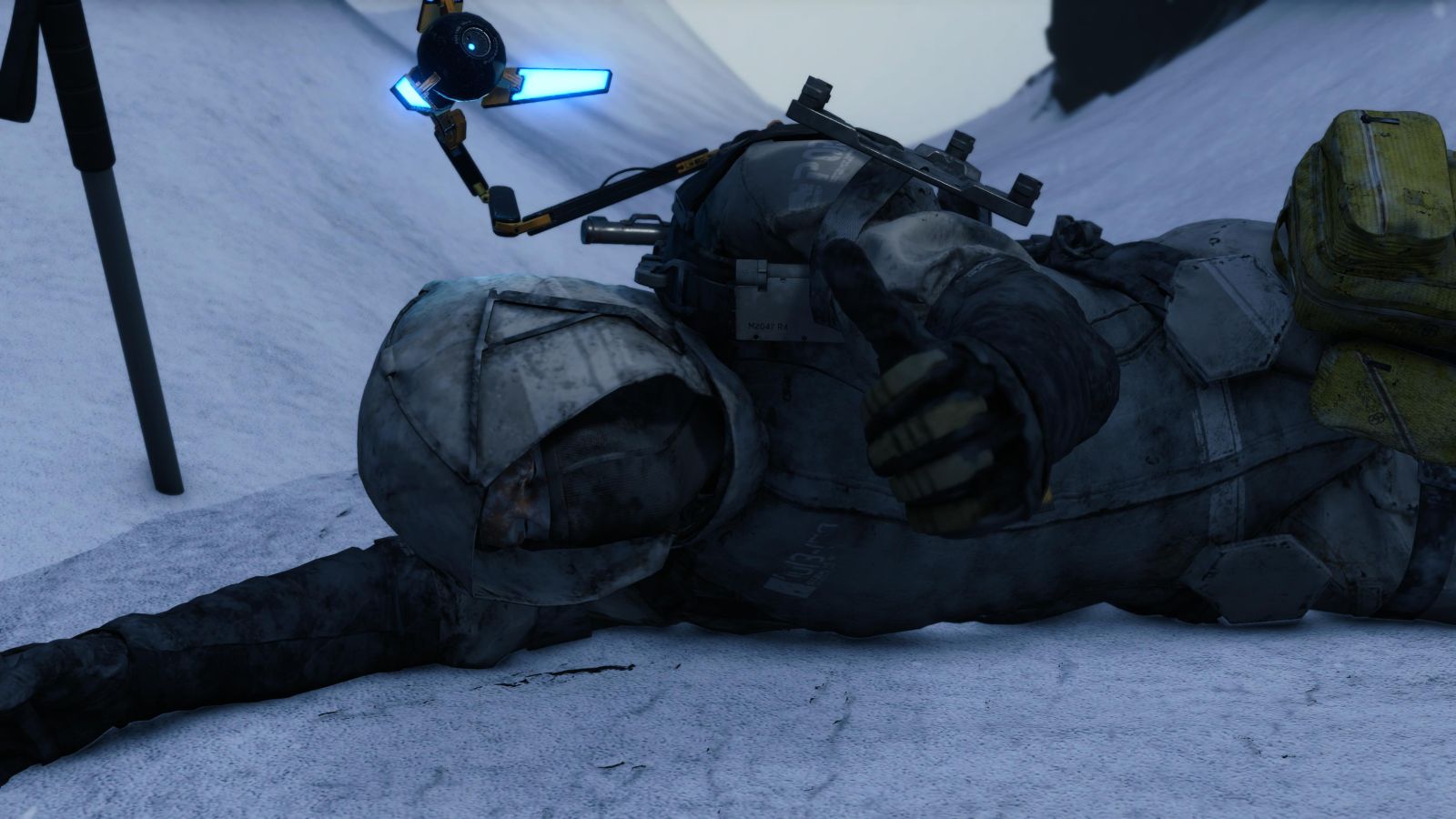 While you’re in your private room customizing, you can also head to the new Firing Range to test out some of your gear, including the Maeser Gun and Support Skeleton. The former is a non-lethal weapon that electrocutes enemies at mid-range, and the latter is a more general skeleton to help you all around as opposed to the specific Speed Skeleton. In the Firing Range, you can test out weapons and playtime attack missions using them. It’s a VR simulation, so you get to play around in new biomes like a desert. I didn’t spend too much time with it, but it’s nice to have somewhere you can figure out all of your tools before having to use them in a fight.

More on the physical side of things, Director’s Cut makes full use of the DualSense, and some of the best I’ve seen so far on the platform aside from Ratchet & Clank: Rift Apart. The heavier your load, the less far you have to pull the triggers to get Sam to grip his backpack straps. It’s essentially the opposite use of this feature than what most games have used, and lets you really feel how heavy your cargo is. While I’ve often begrudged footstep vibration, it’s actually useful in this context, as it only vibrates when you’re sprinting or walking on perilous terrain and serves as a secondary warning when Sam trips on a rock or something. It’s a nice addition rather than intrusive. 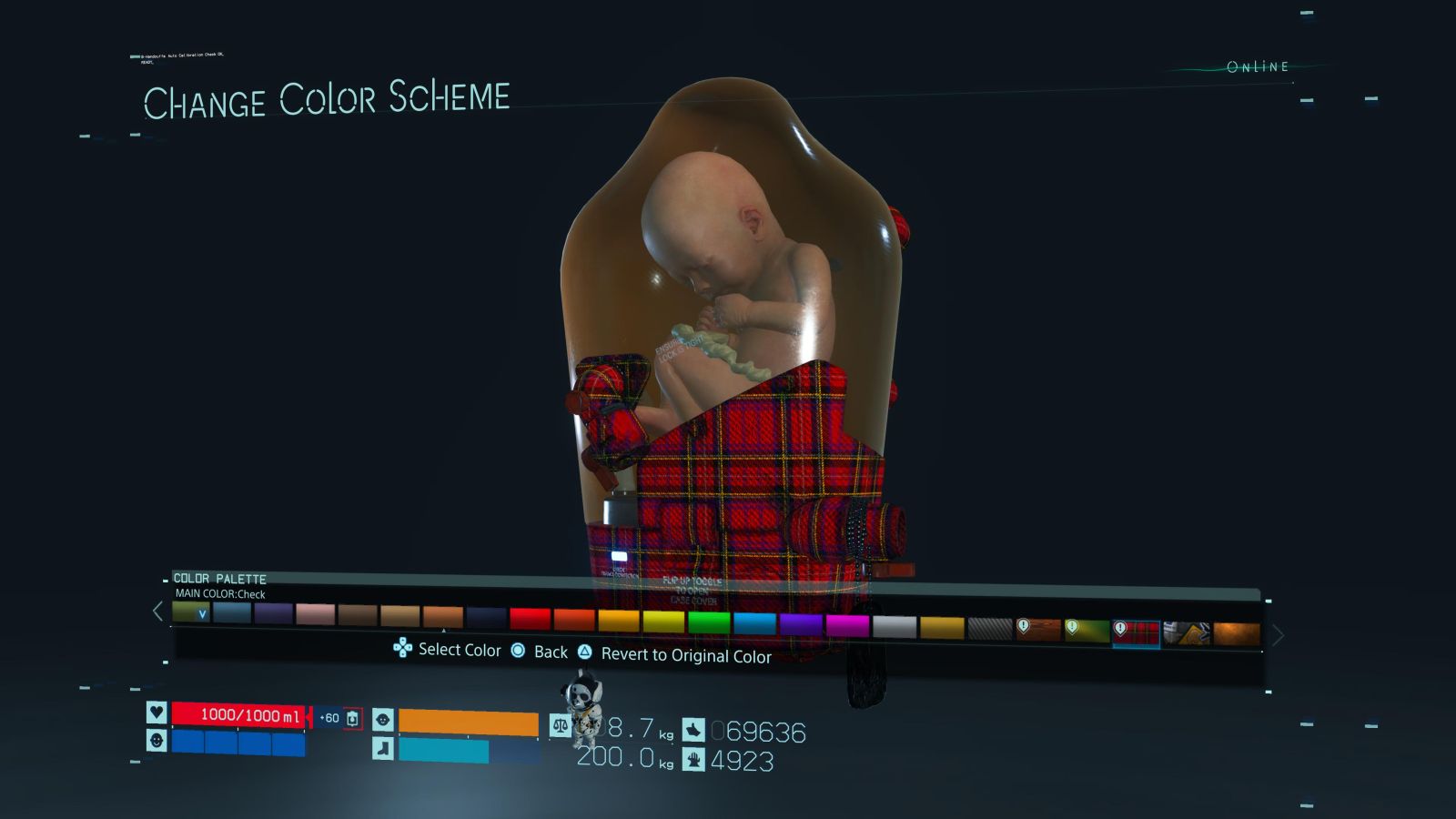 Director’s Cut is based on the PC version of Death Stranding, and surprisingly it carries over everything from it including keyboard and mouse support and the Half-Life and Cyberpunk 2077 crossovers. Maybe this should have been called Complete Edition instead of Director’s Cut? But, I digress. Even if you’ve played the PC version, I’d still say Director’s Cut on PS5 is the way to go as the game is beautifully optimized for the console. Not only can you transfer your PS4 save (including all trophies), the DualSense is a wonderful addition and the loading times are basically non-existent now. There are also two graphics options for performance and fidelity, but as far as I can tell they both hold a perfect 60 frames per second so you might as well go with better visuals.

The biggest attraction for Director’s Cut, however, are the stealth focused Factory missions and the new racetrack. Once you complete Request No. 7, you’ll receive the Maeser Gun and be asked to investigate an old facility some MULEs have made their home. This leads into three, fairly short missions where you’re encouraged to sneak around rather than take them head on. While it’s a nice nod to Metal Gear, it’s incredibly short and, let’s be honest, Death Stranding isn’t a game designed for stealth. I’d certainly like to see this idea explored in the future, having to limit what cargo you carry so your massive backpack doesn’t give you a way is interesting, but these missions serve mostly as a fun distraction that expounds on the backstory of a certain character. 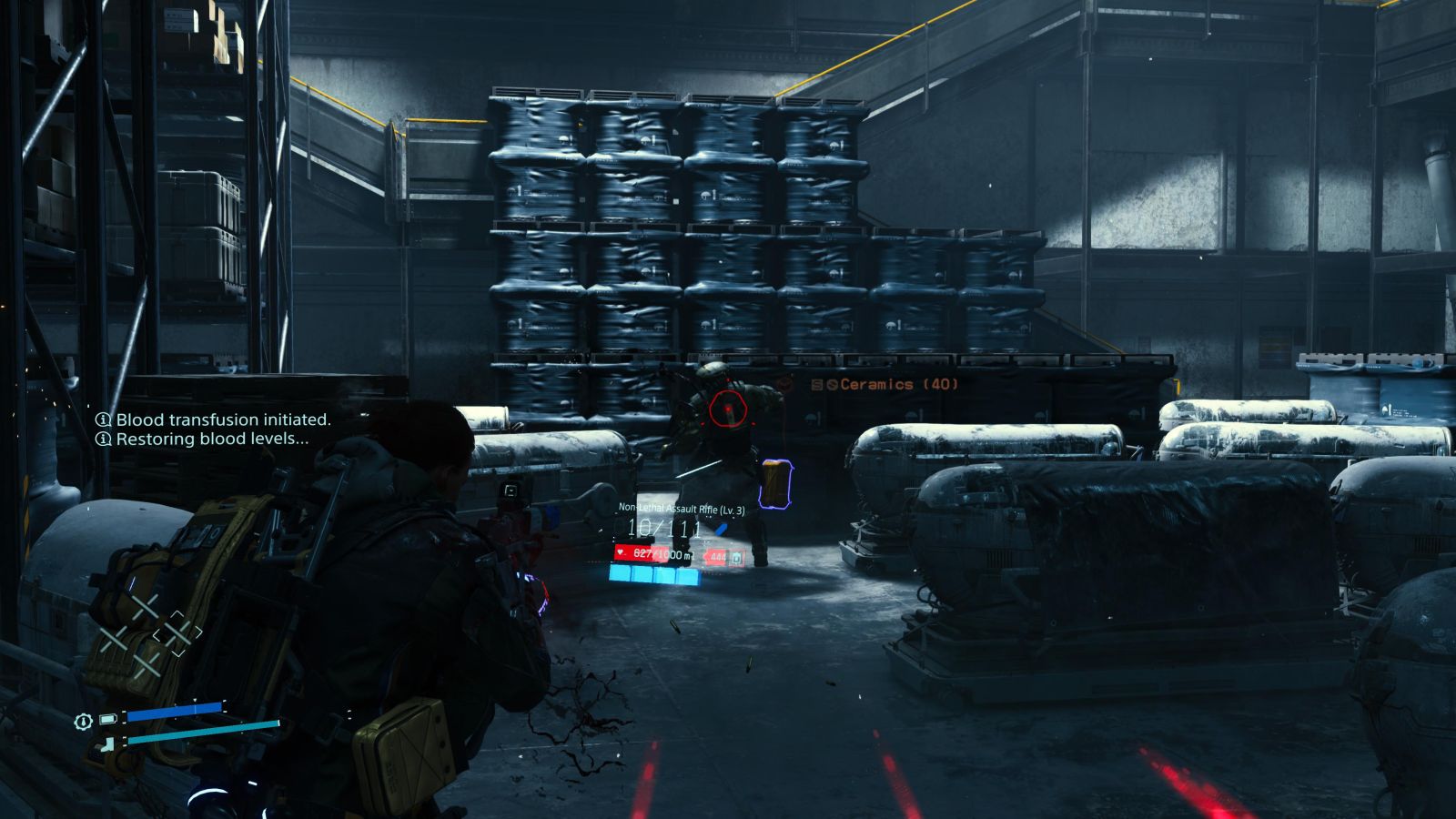 Once you connect the Qpid to the Junk Shop in Episode 3, you can begin to build the racetrack. Over by the Timefall Farm, there’s a terminal you’ll need to insert a ton of materials (650 Chiral Crystals, 2240 Metal, and 1960 Ceramic) to gain access to races. Once you’ve got that done, there are a ton of tracks you can race on with different vehicle classes. You have to bring your own or rent one online, but you can race in reverse trikes, trucks, or the new roadster exclusive to the track. While my favorite to use is the reverse trike so rad it should be on “Ride, with Norman Reedus”, but generally they’re all fun to drive and try for good times. I did find the Roadster to be a bit too slippery, but that might be because every time I tried to drive it started raining. Regardless, you can compete in online scoreboards and race against your own ghosts, so it’s another fun distraction.

All in all, Director’s Cut doesn’t add a ton, but it didn’t have to. Death Stranding was already one of the most interesting games out there, and what’s new here simply fills a few niches to make a more complete experience. The one thing that’s not here that really should be, is some sort of portable music player. The game already has a ton of licensed music, and DC adds over an hour more of great tunes but you can only listen to them in the private room. It really is a shame, I’d love to see Sam and BB jam out with a walkman. This is a worthwhile upgrade if you’re looking to play Death Stranding again, but not necessary if you just want to play what’s new.

Death Standing: Director’s Cut is the definitive version of the game. It’s gorgeous and runs at 60 frames per second, while including everything from the PC version. The new missions are a bit too light on content, but they round out the experience nicely.

David is the kind of person to wear his heart on his sleeve. He can find positives in anything, like this is a person who loved Star Fox Zero to death. You’ll see him playing all kinds of games: AAAs, Indies, game jam games, games of all genres, and writing about them! Here. On this website. When not writing or playing games, you can find David making music, games, or enjoying a good book. David’s favorite games include NieR: Automata, Mother 3, and Gravity Rush.
Related Articles: Death Stranding Director's Cut
Share
Tweet
Share
Submit