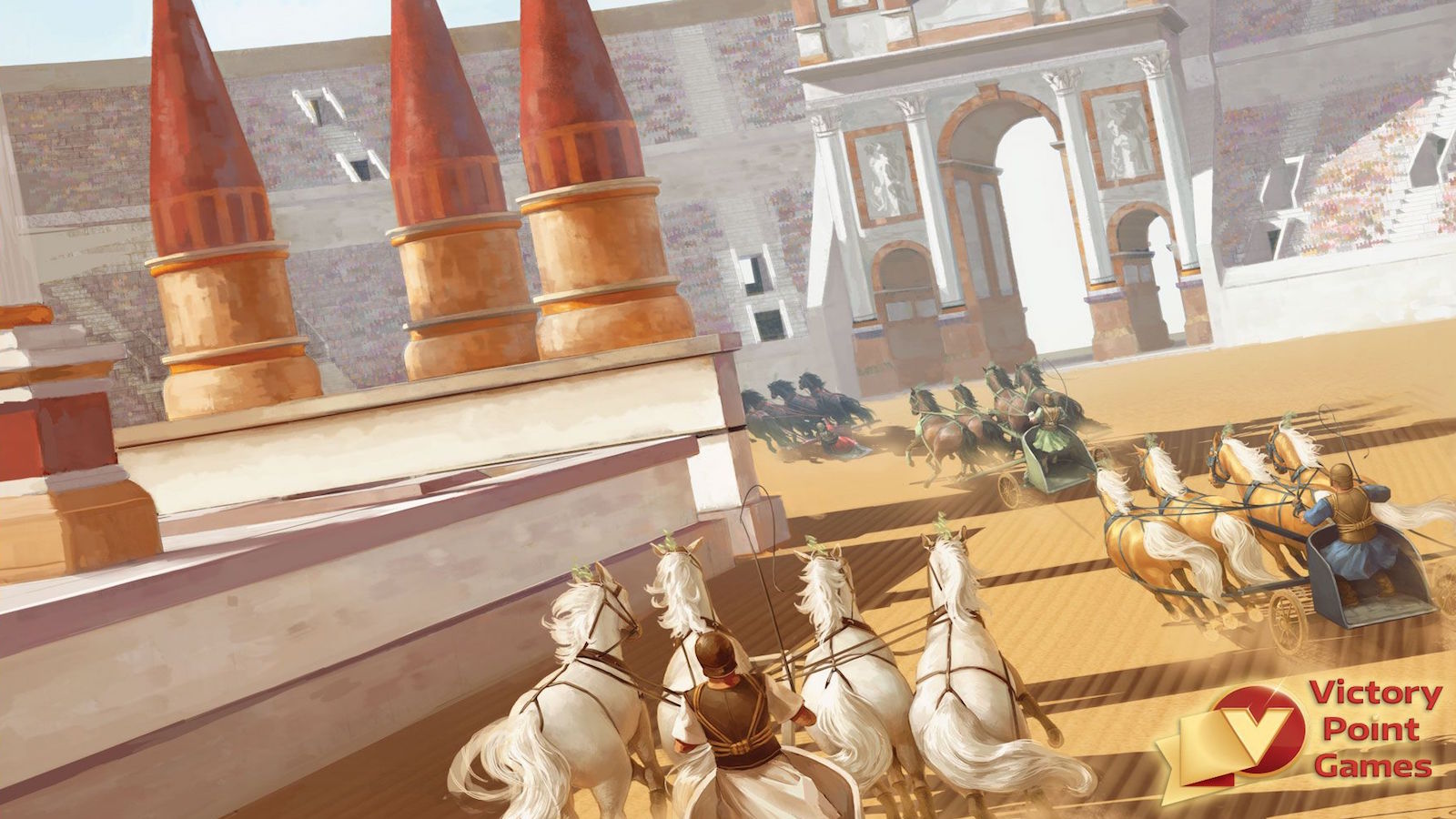 When I reviewed a prototype of Chariots of Rome last spring, I was convinced its upcoming Kickstarter would be a success. After all, Chariots of Rome had all the hallmarks of a quality title: streamlined rules, engaging play, and sound design. Yet, Kickstarter can sometimes, unfairly, reward style over substance and the modest looking racer fell 25% of its target goal.
Victory Point Games clearly believed they had something here and stuck with the project, which allows us to enjoy a wonderful game.

The experience remains unchanged from its original iteration. You take on the role of a charioteer in a race against up to seven other opponents. You can scale the race to your liking, or available time, from choosing a two lap race where only the most reckless will crash all the way to a grueling seven lap monster where few will make it to the finish line.

Your success will be determined by how well you manage your resources and speed.

You begin the race by ramping up your speed from a standstill to a slow gallop. The lowest speed allows you to go forward four spaces. From there, you can accelerate to a medium pace of seven paces or an all-out fast pace of ten spaces. You can coax more movement from your horses by chivvying them, which is done by rolling a die that’ll add an extra one to three spaces of movement. This will cost you a tactic, which is the game’s most important resource.

Every racer begins with eight tactics, and they can be used for both defensive and offensive purposes. In addition to chivvying, you can also use tactics to go after other players to gain an advantage. Whipping your opponents is a tactically safe choice that has no risk and low reward, but ramming your opponent is a high risk and reward maneuver that could make your opponent or even yourself go careening across the track.

Racing is not just for the bloodthirsty, and tactics can be saved to protect you from those more aggressive drivers or stashed away to allow to you safely complete daring turns or emerge unscathed from treacherous overtakes. The game allows different personalities to compete and succeed with the chance of success being fairly equal.

Maneuvering corners is where the race can be won or lost.

An action card deck is drawn from to determine the results of any attacks or dangers you encounter in your turn. Players may lose tactics, receive damage to their chariots or drivers, or their horses may lose endurance. Losing all of your endurance or gaining too much damage will eliminate you from the race, so managing those resources is important.

All players get a brief opportunity to get into the flow of the game since the first three turns are completed without attacks or fear of dangers from overtaking. Just as you enter the first turn, however, the game’s challenges hit you all at once. Maneuvering the turn will depend on how fast your chariot going and how close you are to the inside lane. The difference between the lane rating and the total value of your speed and accumulated damage will determine how dangerous your turn will be. Trying to control a ten speed within the inside most, four rated lane will force you to draw six action cards and will almost certainly spell doom for your driver. Stored tactics can reduce the number of cards you draw, and that becomes an interesting tactical choice between attacking or using them for yourself.
Victory Point left the game unchanged after deciding to proceed with its production, and I am glad the team did. The game remains well balanced since no one can run away with a victory as your horses are incapable of going all-out for the duration of the race. Yes, there’s player elimination, but that is mitigated by the clever use of your resources. Unless you’ve taken multiple chances, an attack shouldn’t knock you from the race. Still, it is fun to speed around a turn and attempt to avoid not only your opponents but the wreckage of the fallen as well.

Longer races are more likely to produce wrecked chariots that act as debris obstacles for the remaining drivers.

The quibbles with the game also remain unchanged, however. Your first thought may well match mine — the game seems to demand miniatures. The cardboard representations of the drivers work well enough, though the colors are faded to the point that telling them apart can be difficult for some to distinguish.

Still, don’t think for a moment that Victory Point skimped on production values. At $45, this is one of their more expensive titles, which pales in comparison to most quality board games. The track is sturdy and the chits and cards are well made. The initiative cards, which are used to determine turn order, should still be sleeved as you are constantly shuffling them. Overall, the game has great value for the price.

I have played several Victory Point titles, and the company does a nice job of producing games that are simple to learn but have subtle tactical decisions that add more depth than you realize. Chariots of Rome is no different. You are always weighing your movements each turn. Should you risk a dangerous overtake or play it safe and go to the outside? Would a fast turn pay off, or would a well timed attack send your opponent into the wall? There is a lot to consider, and you must consider it quickly as the turns flow nicely.

Chariots of Rome would make for a fun night of gaming with a group, and I put an emphasis on group. The game certainly shines with the more racers you have, but you do have the option to play with teams for fewer players to control more racers. Even solo racing is enjoyable with you controlling all the action. No matter your preference, the game’s tactical strength shines through if you can place four or more horses on the track.

It’s been a long journey for Sean Young’s design to see production, but kudos to Victory Point for sticking with the title and seeing it through.

Victory Point’s dedication to seeing Chariots of Rome produced is a reward for those that try the game. You take on the role of a Roman charioteer in a brutal race around the track. The game scales well for short, quick races to grueling, long affairs. Each turn is about striking a balance between resource management and risk taking. The two combine for a balanced game where you are never out of the race until you are literally out of it through sheer brutality or recklessness.