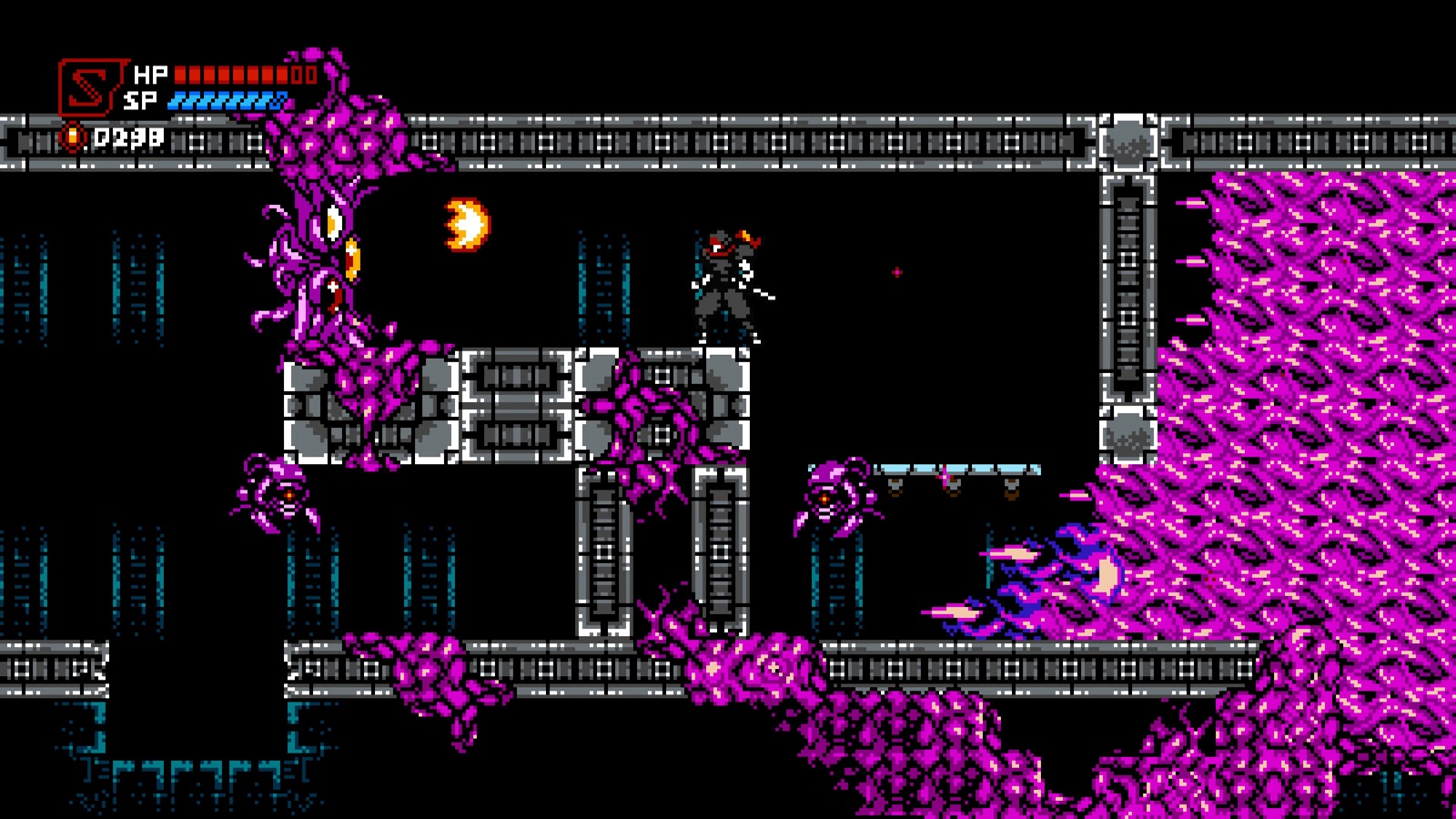 While I love the retro gaming scene, I don’t hold the 8-bit era with a rosy nostalgic outlook, mainly due to its generally unfair approach to punishing difficulty. You know why I adore Cuphead (a game with similar difficulty)? Because I don’t have to start from the beginning when I die every two minutes. It seems that Yacht Club Games has answered the call to make more Ninja Gaiden-esque throwbacks with Cyber Shadow, a game that fights you every step of the way but handles it exceptionally well and rewards rather than punishes you for the fact that you’ll retry often. 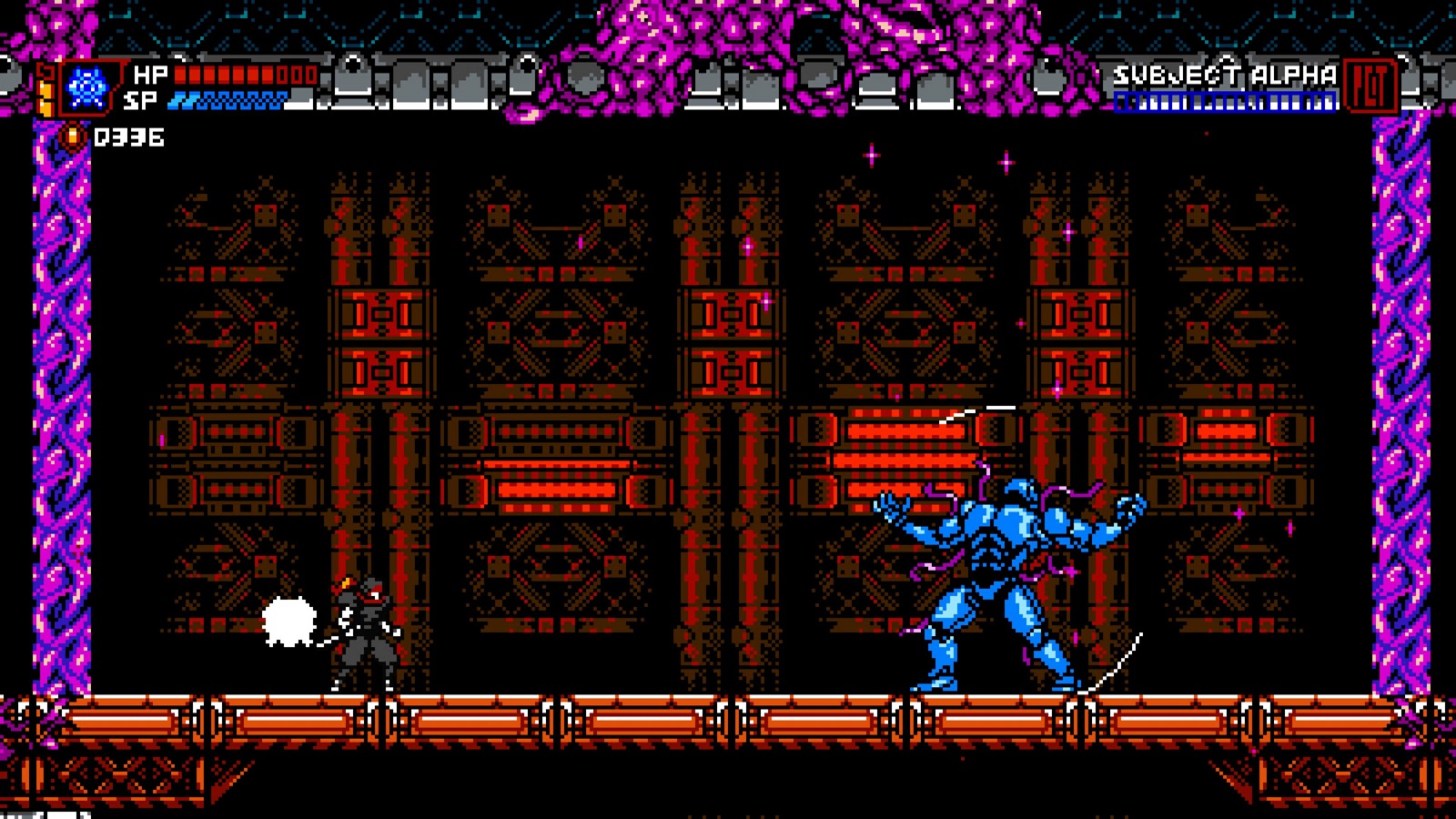 Cyber Shadow puts you in the role of Shadow, who… well, turned cyber due to the evil Dr. Progen murdering his clan in Mekacity. A robot named L-Gion awakens the ninja as he plans to avenge the fallen in a race against time to save the day. It’s a premise that feels right at home for the 8-bit throwback, but I was surprised with how many story cutscenes there were in the game. The game is divided into chapters, and you’ll see more of the narrative unfold as you continue; it’s done in an authentic pixel art style that emulates the NES era perfectly.

Also emulated is the easy-to-use yet deep control scheme. Like Ninja Gaiden, your main attack is a sword that can only slash horizontally. The game throws enemies from all directions at you, so you’ll need to navigate a bunch of different hazards while managing your limited attack range. Thankfully, as you continue through Cyber Shadow, you’ll also receive abilities that you can use in a pinch, such as a shuriken or flame projectile (perfect for killing hard-to-reach enemies). 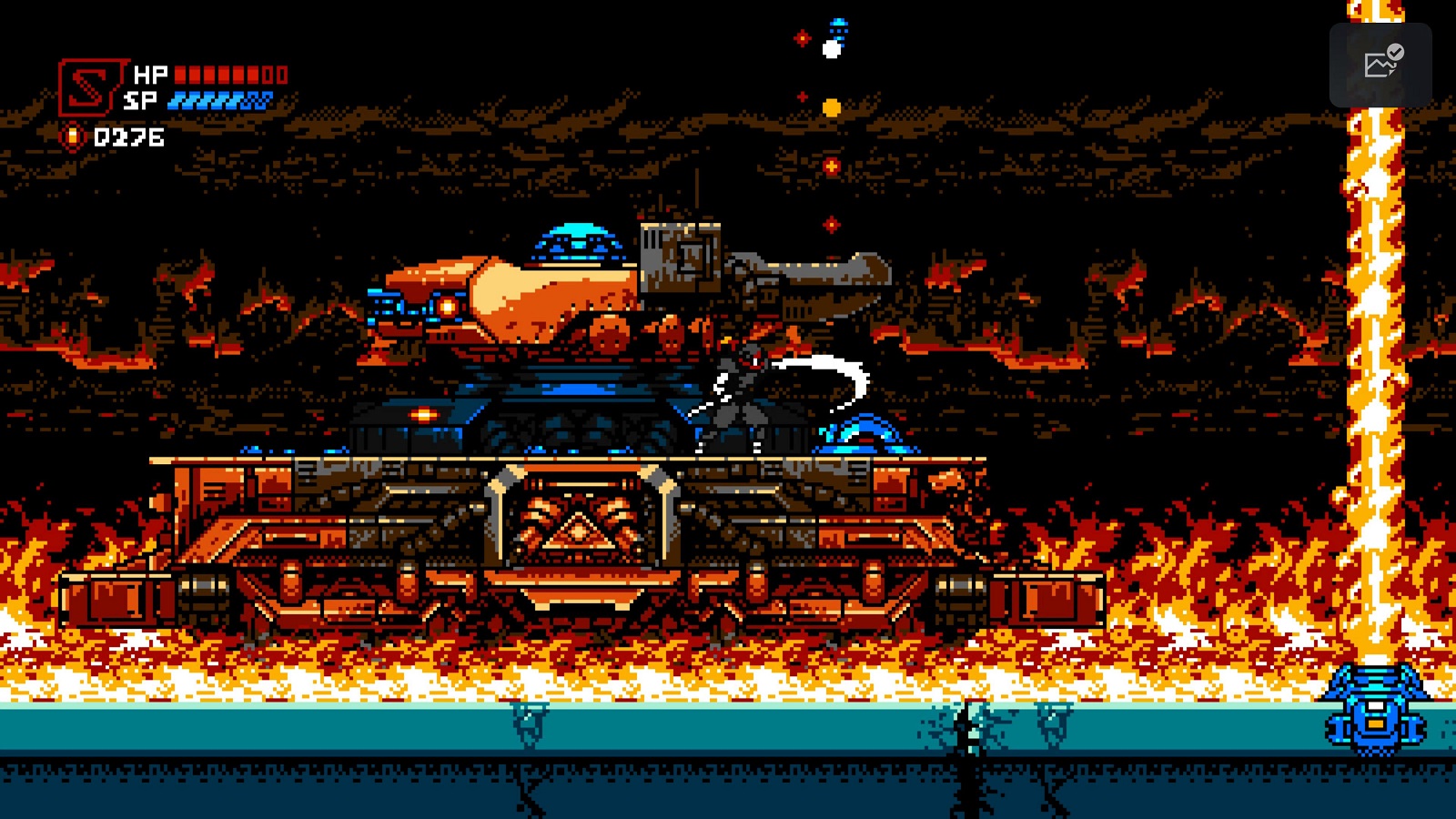 The best abilities come in the midgame with the momentum-based moves, and this is what makes Cyber Shadow shine. Downstrike and dash moves don’t seem too flashy… until you can chain together a bunch of them together and be nearly invincible. There’s nothing quite like clearing out a room of enemies using just a few moves. It feels so smooth when you can commit to the moves, and the game will challenge you with innovative approaches to movement. That said, be prepared to practice a lot before you get to the level of effortlessly mowing down your enemies, since this game requires precise movement and timing in order to get anywhere. The parry move you receive is a gamebreaker, but only if you can master the command prompts. This game is tough as nails, and you’ll die quite a few times.

Thankfully, this is mitigated due to the generous checkpoint system included within levels. While the games Cyber Shadow mimics were devoid of checkpoints most of the time, here they’re peppered in enough that it feels like an achievement to reach one while also acting as a way to breathe easy now that you don’t have to worry about losing progress. The fact that you get unlimited continues is a great option, and should you want a harder experience, most checkpoint terminals have optional modules you can select that will replenish your health, SP (used for special attacks and abilities), and a random item… for the cost of in-game currency that you’ll pick up in your travels. Thankfully, these bits are everywhere, so if you’re feeling a bit worse for wear on one section of a level, you can easily pick up some currency to fully replenish your status.

The bosses here are a treat too; while some have easy exploits you can use to dispatch of them (some bosses are prone to your sword spam, for instance), they’re all difficult the first couple of times you face them, and they’re all fast-paced and fun to learn when it comes to attack patterns. My personal favorite is chapter 2’s boss, Scrambler. It’s a hard initial fight where you need to know your jump momentum, but once you think you’re done… a harder second phase occurs. Nothing unusual for the genre, but man was it fulfilling when I finally beat it. 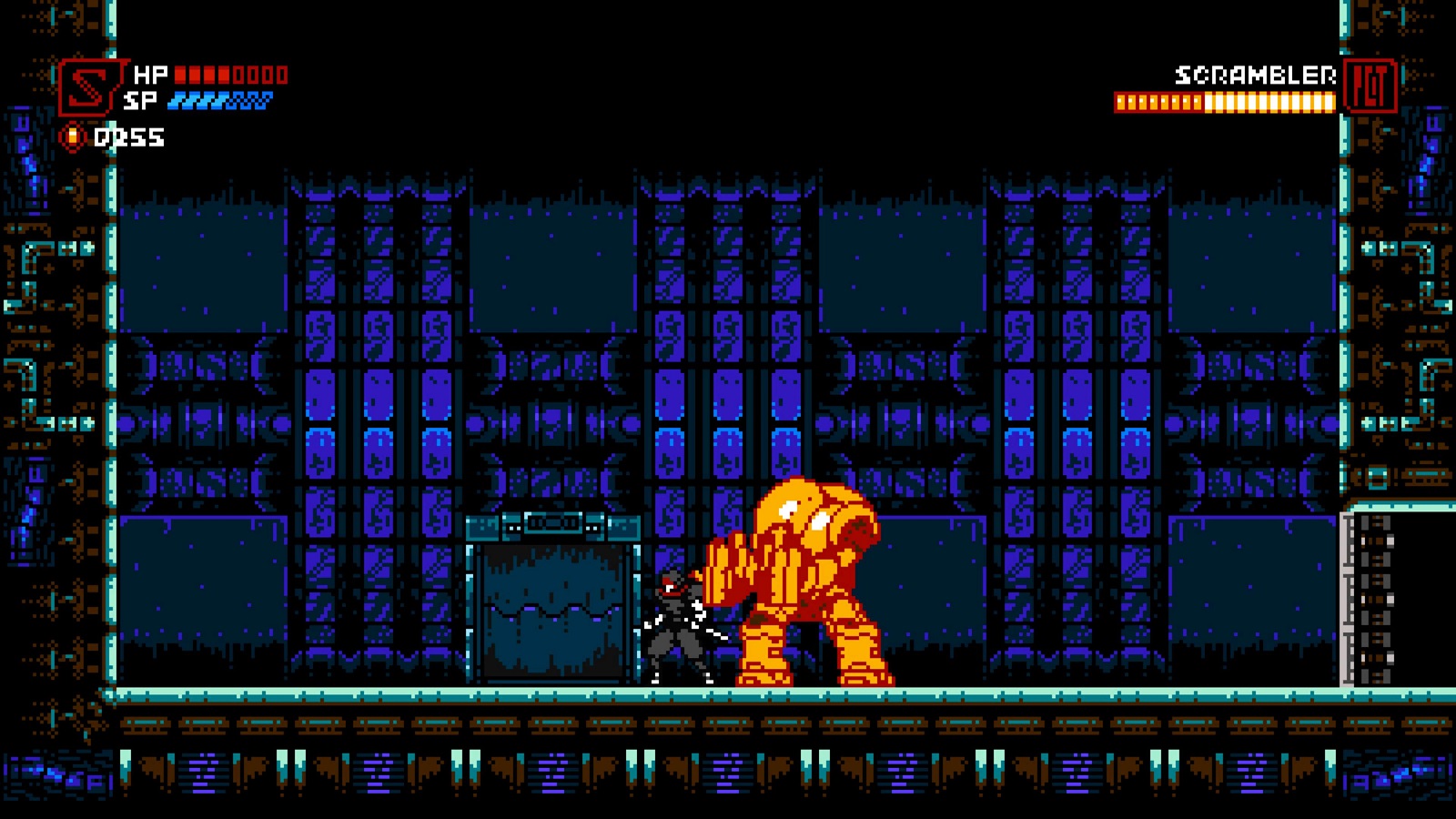 The presentation of Cyber Shadow feels authentic, with the chiptune soundtrack here being a close reproduction of what a game would sound in the early 90s, but still feeling modern and fresh. The pixel art style is bright and distinctive, and even though it doesn’t take advantage of the PlayStation 5’s processing power, Cyber Shadow looks as clean as ever.

The only problems I have with the game are the Metroidvania elements, which unfortunately affect the pacing of the game in the beginning. Sure, it’s a nice throwback to the Metroid series where you slowly get powerups and can return to areas to nab powerups you missed the first time, but at the same time, without the movement-based abilities in the mid and endgame, the first few chapters are a slog and an exercise in frustration. I didn’t know how much I needed a parry or a dash in the beginning until I kept getting murdered by instant-kill spikes a dozen of times because all I had was the default sword. This also extends to some of the story cutscenes, which can feel a bit unnecessary in the middle. I think it would have been better to trim some of the longer cutscenes and put them in the in-game engine rather than have separate cutscenes here. 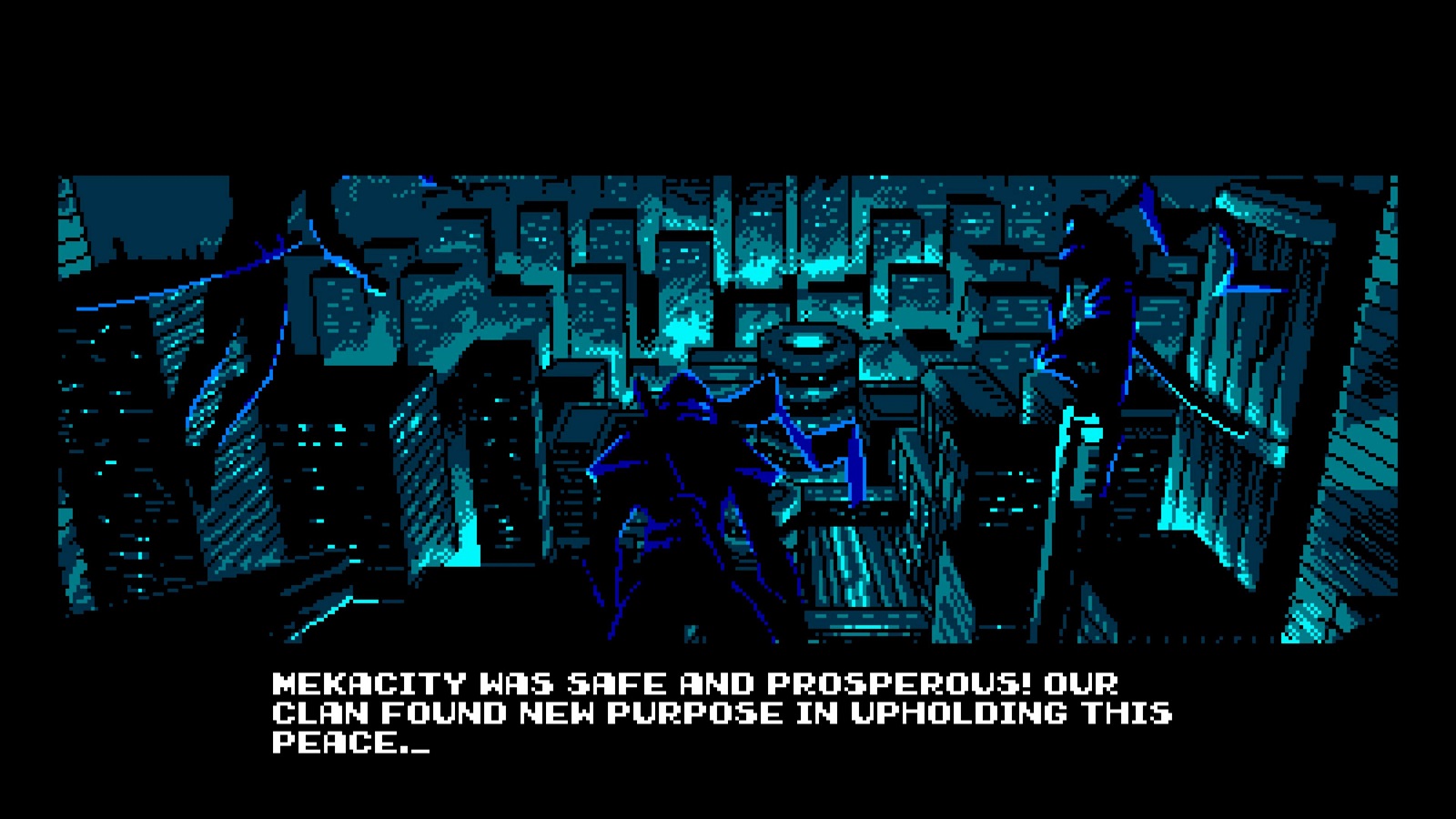 A love letter to the NES era of platformers, Cyber Shadow scratches the retro itch just right. With some amazing gameplay elements and a killer presentation, this is an adventure you need in your life right now.

Elisha Deogracias is an aspiring accountant by day, freelance writer by night. Before writing for Gaming Trend, he had a small gig on the now defunct Examiner. When not being a third wheel with his best friends on dates or yearning for some closure on Pushing Daisies, he's busy catching up on shonen manga and wacky rhythm games. Mains R.O.B. in Smash. Still doesn't know if he's a kid or a squid.
Related Articles: Cyber Shadow, Indies
Share
Tweet
Share
Submit