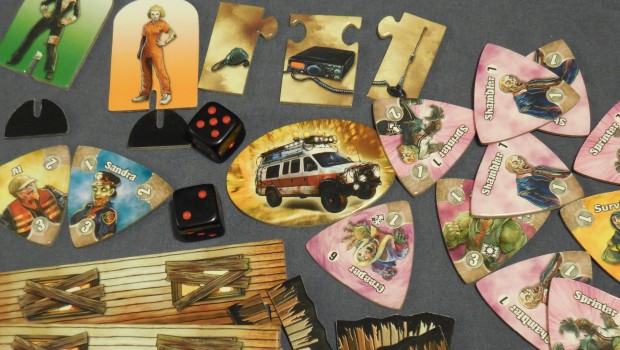 There are many pieces of good advice if the zombie apocalypse breaks out. Don’t get surrounded by zombies would be the first piece of advice I’d follow, a lesson that the players in Dead Panic have already broken when the game starts. Players are a group of people trapped in a cabin in the woods as zombies come crawling towards them trying to kill them and enjoy their brains. Dead Panic is a fun game, but a big step up in complexity from its predecessor, Castle Panic.

The rulebook was frustrating since key parts of the end game were scattered or poorly addressed. I also had some difficulty with learning the rules to some things before understanding why I would want to know those rules. The weapons are a good example of this, where I learned that ranged weapons could be used as clubs once before breaking, but not why that is better than my bare fists.

The publisher decided to use punch out cardboard cross pieces to make the walls and characters stand up. Sometimes these fit snuggly, but most of the time the base falls off when picking up your piece. Since your characters move all the time, this can be quite annoying.

Overall I like the art style. The artwork gives the game a lighter tone than other zombie games which fits the weight of this game.It’s clearly the same artist as in Castle Panic, and has a cartoony style mixed with some funny or exaggerated details that work. Especially impressive is the artwork for the characters when they are turned into zombies, which are clearly the same characters but with missing limbs, wounds, and soulless eyes.

During a normal turn, all players take two actions. Actions include moving one space, drawing a cabin card if in the cabin, playing a cabin card, or firing a ranged weapon. Using the radio to call the van and moving it one space around the outer edge of the board also requires an action. Most of the cabin cards are weapons, which is useful, and the cards are not weapons are almost all positive.

After the players take their actions an event card is flipped. These are all bad and tell players two things. First they indicate how many zombies to add to the board. Often you’ll add zombies equal to the number of players, but occasionally it will be slightly more or less. Specific placement rules can sometimes be found on the event card as well. Zombies are randomly added to a portion of the outer ring of the board. The event cards also have text which must be followed. This text might give zombies more movement, damage some weapons, or give a special zombie placement rule. The event cards work very nicely in this game to give variety and challenge.

After the event card is resolved the zombies move. Most move just a single step in towards the center of the board. Certain zombies move two, and others move only on a successful die roll. Zombies can move sideways or backwards as well to gang up on a survivor or characters who are outside the cabin. How the zombies move and which zombies have moved is actually the hardest thing to keep track of in the game, especially if you are use to the Castle Panic rules which are simply to move in towards the center.

After the third wound a character turns into a zombie and starts helping the zombie side. This keeps that player involved in the game to the end, which is very nice, and there are interesting decisions to be made as the leader of the zombies. The zombie player can fight the other players by rolling two dice against the other player’s roll of two dice with the higher roll winning. Each turn the zombie player can choose from a number of benefits including adding one to their die rolls, rerolling their dice, or directing the movement of another zombie.

I think Fireside Games might have done themselves a disservice by making the game look so similar to Castle Panic. Visually it is very similar, both because of the circular board with rings of terrain radiating from the center as well the triangular monsters or zombies. The movement rules are also similar, with monsters and zombies both moving in towards the center where the castle or cabin is.Otherwise Dead Panic is a different game, with different objectives (not protecting the castle, but assembling an object, then escaping) and different kinds of actions (not trading and playing cards but moving and fighting) and greater complexity in all aspects. It is as if the designer of Axis and Allies had named it Risk: WWII. The second game is not an expansion of the original but a new game that shares only surface features.

Why You Might Like Dead Panic
Dead Panic conveys the zombie theme quite well. The zombies are vast in number and they just keep coming. It is very thematic that players who are wounded turn into zombies. There really is a nice amount of panic to the game.

The event deck works really well. It keeps the game tense and unpredictable. It keeps players from planning too many turns ahead and adds some nice challenges and twists.

The player avatars create some good strategic moments. Being able to move around the board, run from zombies, run out to fight zombies, meet up with other players or with the rescue van all work really well.

Why You Might Not Like Dead Panic
I pointed out above that Dead Panic is more complex than Castle Panic. This change makes it less family friendly and less casual gamer friendly. The way that the zombies see players and move towards them is difficult to grasp at first. The relative usefulness of the cabin cards is hard to understand during your first game. You may not be sure which weapon is better. You may find that your kids who enjoyed Castle Panic when it came out are now old enough to enjoy Dead Panic, but don’t think of Dead Panic of an advanced version of Castle Panic. They are different games despite the cosmetic similarity.

I found dice rolling to be an unsatisfying way to fight zombies. I think it makes the combat too random and hard to plan for in a way that undermines strategy. Several of the weapons function to reduce this randomness, but it is still a weak point in my opinion.

I thought the rulebook was disappointing. As I mentioned above, the biggest problem is that the rules about the rescue van are scattered throughout the rulebook and holes still exist. The rulebook covers the rules in the order of the player aid, which is generally helpful, but also results in presenting rules or components before they make sense sometimes. Perhaps it needed more signposts to keep me better oriented.

Who Can You Play This With?
I would say anyone old enough to enjoy zombies. Probably 12 and up. It’s too complicated, and too gory, for younger children. It is about as complicated as Settlers of Catan, Carcasonne, or Ticket to Ride. More serious gamers may be frustrated the high luck and the lack of strategy. The decisions are not tight enough to reward better decision-making.

How Hard is it to Learn?
This game is not too hard to learn. The rules are simple enough to teach in 5 minutes. Everything is public knowledge, so it is easy to coach less experienced players. One player can handle resolving the event cards and moving the zombies.