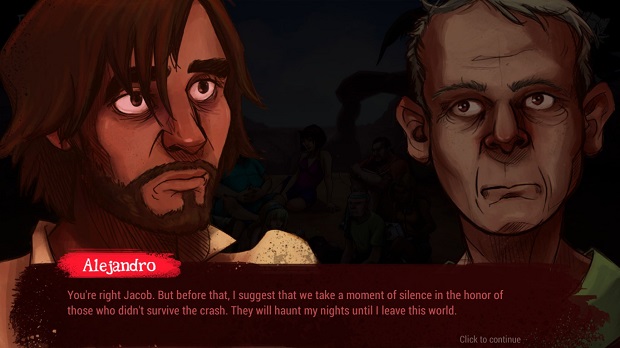 Dead in Bermuda bills itself as a survival management game with adventure and RPG elements, which is a decent start at trying to describe just what it is. If you ask me, I’d call it a mashup of Oregon Trail, The Sims, tabletop games like D&D or Pathfinder, and generic survival video games. I haven’t seen the TV series Lost, but it’s been compared to that too.

I’ve grown pretty weary of all the first-person survival titles coming out nowadays, with similar scenarios and interchangeable enemies. Zombies, wild animals, the weather – you know. This game opens with a plane crashing onto a desert island, which is pretty standard fare and hardly piques your interest. However, after establishing this unoriginal premise, the game begins to come into its own.

Along with keeping each character rested, well-fed, and happy, you have to replenish the water supply and keep the fire from going out.

A tutorial guides you through your first day on the island, teaching you how the survivors’ camp is set up and the intricacies of managing everything. There’s a plane to scavenge, new craft recipes to research, materials to harvest, tools to build, and much more.

Each of the eight characters has their own personality and unique skillset, and the tasks they have to tackle are completed more efficiently with the right people assigned to them. A character may be cut out for tasks that require crafting knowledge, but totally clueless when it comes to chopping wood or hunting.

As characters level up, you can choose which skills to upgrade.

Characters’ current states play a part in how efficiently they work as well. Doing tasks will increase their level of depression or fatigue, and everyone’s hunger increases at the end of each day. Getting attacked by creatures in the jungle adds onto their injury bar, and eating uncooked meat or fish can cause sickness. Pay close attention to each character’s state, because if any meter reaches 100 percent, they will die. Though it is dark, I do appreciate the inclusion of a depression meter and death by suicide. It is pretty realistic, considering the circumstances they are in.

There are also relationship meters, but you have very little control over them. Even if you pair up certain characters to work on tasks together, their favor toward each other could go up or down; there’s no way to predict it. Campfire chats every evening are predetermined by the script of the game, so you can’t influence their outcome either.

Every evening, all of the survivors gather around the fire to hash out the day and have a meal – if there’s any food to spare.

If you’re wondering where the Pathfinder elements come into play, it’s when you step foot into the jungle. On your map, the jungle is laid out in a grid. In each square, there is one thing you can interact with. It could be an object that requires a stealth check, a person with different dialogue options, or something else. Failing checks leads to monster attacks, and not choosing the best conversationalist could have negative consequences.

At some point, this game starts to feel like a lot to take in at once. Am I supposed to care about the characters’ lives before the plane crash? Does it matter who wants to bang who? Is the story you discover through exploring the jungle really necessary?

Every creature you meet seems weirder than the last.

This all feels like an effort to differentiate Dead in Bermuda from other survival titles, but the art style and gameplay mechanics were enough for me. If you can’t influence the relationship dynamics, and if they don’t make an impact on the story or the efficiency of tasks, then what is their purpose? The weird events, characters, and creatures you encounter in the jungle feel tacked on as well. Isn’t there some other way to get off the island besides a drawn-out narrative involving a prophecy?

Overall, I will say I have really enjoyed playing this game. It’s fairly addictive once you get into it, which for me was about the seventh or eighth day. However, I don’t think I’m quite hooked enough to ever unlock the 100-day achievement on Steam.

Dead in Bermuda is without a doubt an interesting game, from the comic book art style and oddball characters to the challenging resource management. Though this game is somewhat of a mixed bag, I’d say that you’ll come away from it with mostly positive feelings. It is strange but enjoyable, and perhaps the vision was too ambitious for the final product.

Sarah Marchant is an office admin for a nerdy t-shirt company. She has a soft spot for indie games, a passion for story-driven titles, and a weakness for cooking games and anything with zombies.
Related Articles: Dead in Bermuda
Share
Tweet
Share
Submit