Rhythm, dancing, and other music oriented games have gained a following over the years, whether it be games like Guitar Hero, Just Dance, or even Elite Beat Agents. I used to only dabble in rhythm games, but lately I’ve discovered how much I truly enjoy some of what this genre has to offer. My latest experience is Muse Dash, a side-scrolling rhythm game with a focus on Japanese songs. The anime lover within me leaped for joy as I hopped into my first song, and from then on, I excitedly moved from song to song, eager for what was to come.

Muse Dash is a simple game: your character is endlessly running in side-scrolling levels while projectiles and enemies come at you from the right side of the screen. There are two circle crosshairs in front of your character: one at ground level and one just above the ground one. One button causes you to attack the ground crosshair, while the other makes you jump and attack the mid-air crosshair. You’ll want to time your hits to match when objects or foes enter these crosshairs. Don’t worry, you won’t only be using visuals to accomplish this. Your targets will typically arrive at the crosshairs in tandem with the rhythm of the song. Obviously you’ll still want to look to see what you’re hitting and when to strike, but the beat can be an incredible help when trying to time your hits. 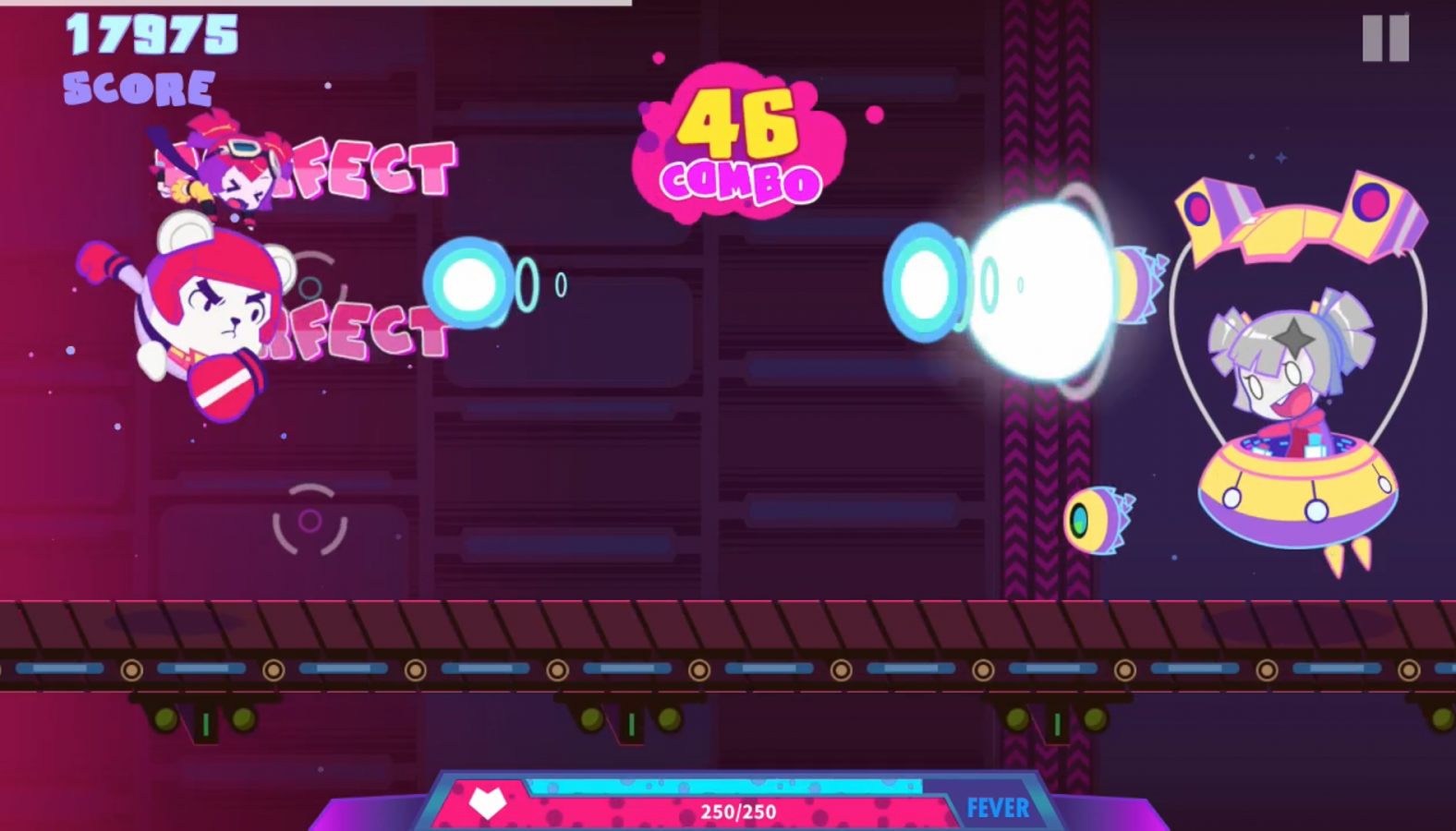 In addition to the normal hits, you’ll see stars appear with long beams of light attached to them. Instead of pressing the button quickly to hit them, you’ll press and hold the corresponding button until you’ve reached the light’s end. Missing these doesn’t cause any problems, but it does drop your combo back down to zero. You may even have to hold down both buttons to capture two different stars, or you’ll be holding down an aerial star while needing to attack with the ground button. You’ll need to pay attention as you go in order to maintain that combo for as long as possible. Speaking of hitting both buttons, there are also objects that can only be dealt with by pressing them both. These are a string of tall objects that link from the top crosshair section to the bottom one. They aren’t hard to hit, but you’ll still need to be ready for them.

The game comes with a bunch of songs, separated into a plethora of categories. You have the standard tab with your starter songs and other songs that get unlocked from leveling up (more on that later), along with other tabs that have every song under their sections unlocked. You get a good mix of upbeat, tense, unsettling, and frenzy-inducing songs, and every part of me loves that. I never fully knew what to expect going into each song, but I never finished a song with even an ounce of disappointment. I have to admit that Alice in Misanthrope was easily my favorite song that I’ve played so far. Something about the fast pace mixed with the eerie yet familiar tone gave me chills.

As for characters, you start with Rin, a tough rocker chick, but you can unlock Buro the adorable youngster and Marija the sassy yet dignified lady. You can even unlock different versions of each of the three girls mentioned; these are essentially them in various costumes, but they do get different effects. As with the alternate costumes, the three standard girls have their own benefits as well. For example, Rin starts with an extra 50 health. Health is important because as you take hits from objects, your health will drop. If it hits zero, you lose. You unlock characters by obtaining a designated number of special items; you obtain these items by leveling up, and you level up by getting high scores and grades from completing songs. This is even more of an incentive to perform well. 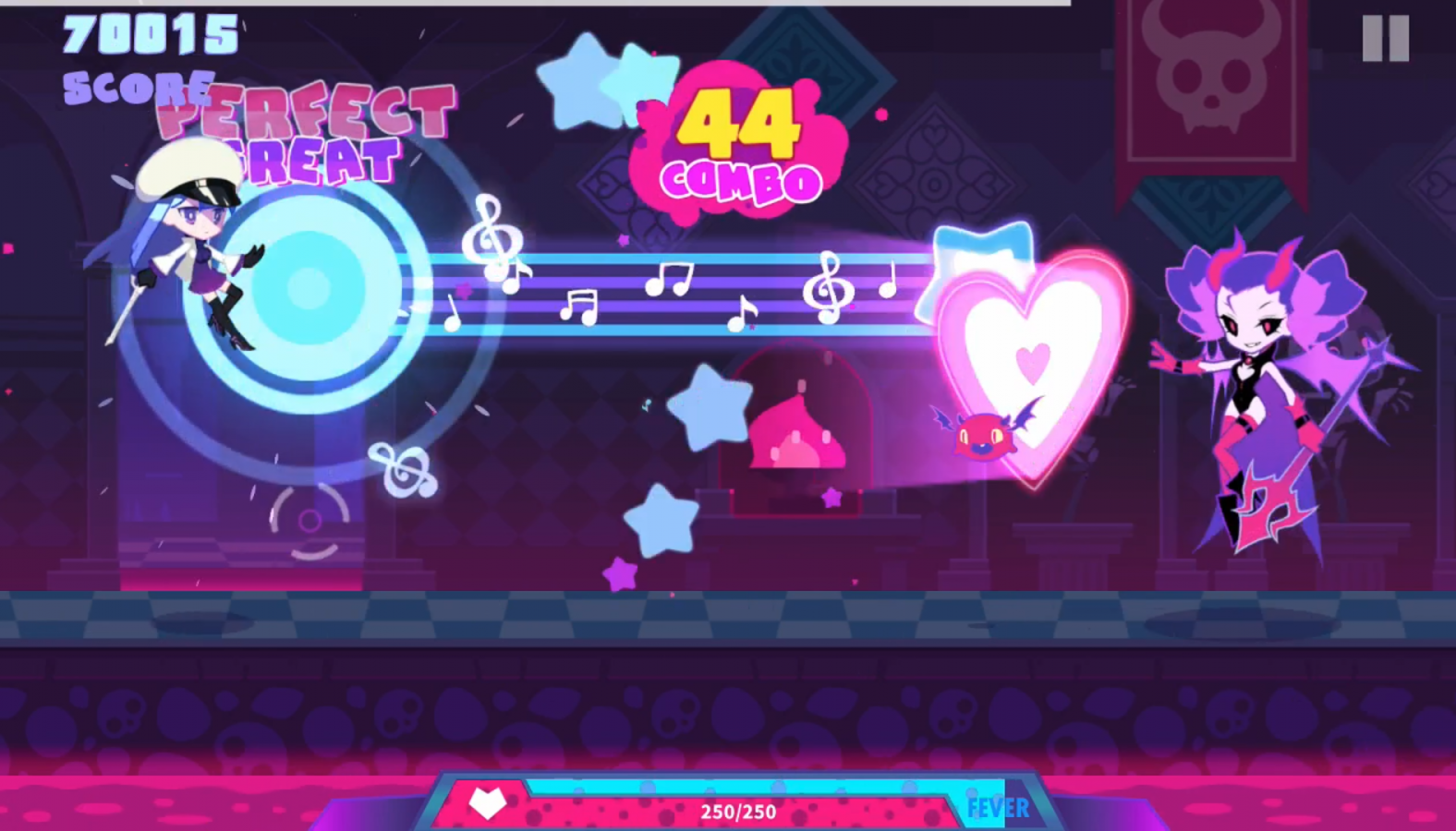 In terms of difficulty, it definitely varies depending on the song you choose and what difficulty level you choose to play on. At first you can only choose to play each song on easy or hard, but a fair amount of songs have a master difficulty that can be unlocked after completing the song on hard. I haven’t done a master difficulty song because the ones I’ve done on hard have been enough of a challenge for me. As you’ll see in the gameplay above, I had my hands full with my hard mode songs. I like a good challenge, but I don’t like jumping into something that’ll crush me easily. That being said, hard mode is the perfect tough spot to jump into for this game. On that note, I’d say that Muse Dash is perfect for fans of rhythm games, especially if you love Japanese music. If you aren’t a fan, but just like some good beats, you might get into it anyways. Regardless, it’s time for a dash dash revolution, so put your headphones on and get ready to kick it to the beat.

Muse Dash is an incredibly addictive rhythm game, especially if you're a fan of Japanese music. The cute characters and visuals match the overall anime-like tone of the game. Tons of songs to choose from will keep you busy for a good chunk of time, especially if you aim to do everything.

Codi loves to play video games and watch movies. He will watch almost any kind of movie just to experience them. His ideas take inspiration from the shows and movies he watches, and games he plays. He also loves a good pun.
Related Articles: Muse Dash
Share
Tweet
Share
Submit