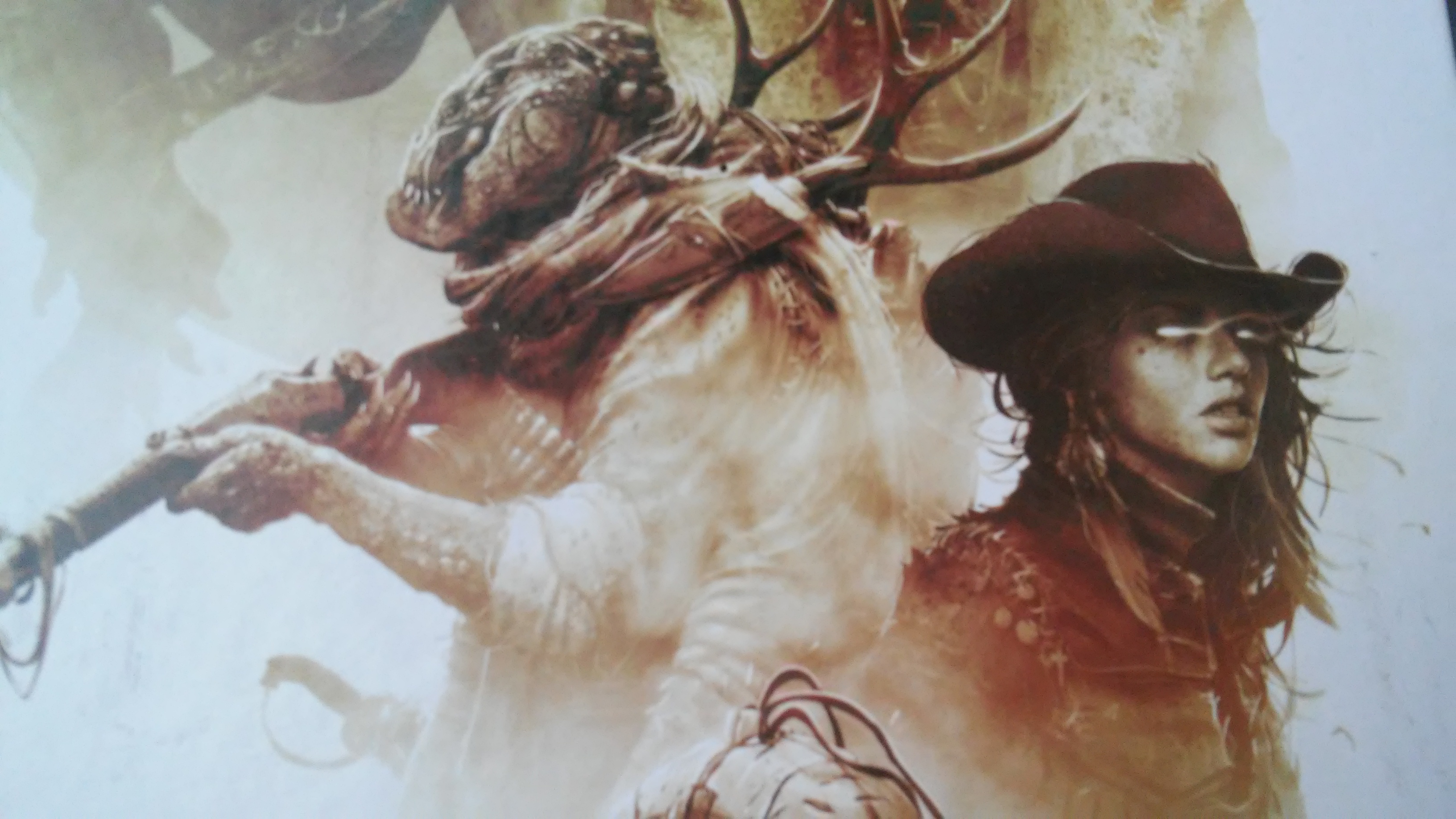 I think we’ve found a winner in the contest for best one on one/team based/cooperative cat vampire shootout games. Grimslingers doesn’t sound like it will work until you dig into it and find how well crafted every piece of this game is. The basic combat is centered on intuition and logical deductions, but the game builds on that firm basis with additional modes and optional rules to let you make the game your own.

As if the westward expansion weren’t already tied up in enough violence, the Forgotten West has become cursed, and you with it. As a Grimslinger, you have been granted mystical power by the Iron Witch, and you maximize these abilities with guns and sharp instincts to combat the monsters stalking this forsaken land, as well as the other Grimslingers you come across. The game is ambitious, offering gameplay on multiple fronts as a one on one duel, multiplayer battle, and cooperative journey through the cursed west.

The tone of the game marks the perfect line between dark and humorous that defines the weird west genre which that has been gaining traction ever since Deadlands saw its return. You stalk into the unknown, testing the limits of your logic and intuition against deadly creatures. The better you get at the game, the more insane options you can add into it.

These arcehtypes, and their attached signature spells, being among the easier options

The three modes of the game largely function on the same set of mechanics, which rely on a deck of cards representing the spells you have available, and their circular nature. You start with your entire deck, which, at its most basic, consists of six elemental spells. Those elements fit into two three-spell wheels of rock-paper-scissors alignment. Each round, you and your opponent choose one card to secretly play face-down and then reveal to resolve their effects. Each spell cancels one other and is in turn cancelled by another.

Spells do damage but have secondary effects, such as giving you extra health or forcing your opponent to discard a card. Thus, there is an additional dimension to any decision you make in game: your opponent has needs which they must fill to beat the game, but they also have to watch out for elemental weaknesses. You have to manage not only your health, ( you die when it hits zero), but Energy Points, which allow you to draw new cards and use special spells and abilities. Additionally, you can trade health or discard cards to gain more EP, giving each resource serious additional weight.

Every spell has a speed which dictates when it goes off, but elemental spells all have a speed of 9. If one trumps the other, it goes through and deals its effect. If neither interact, however, the beams meet and both Grimslingers must power through with grit and intuition to trigger their spell. They do so by means of a miniaturized game of blackjack, played right there at the table.

You read that right, and it’s awesome. Each person is drawing to 11 rather than 21 from a smaller than normal deck of cards. If you tie, neither effect goes off. Whoever reaches 11 exactly Apexes, doing an additional point of damage. If you go over, however, you Exhaust, and the opponent will deal double damage to you. These short and somewhat frequent moments add a ton to the game. Depending on your skill, you may want to encourage or discourage them, and a game already built on reading your opponents and pushing your luck gets a serious boost whenever the deck hits the table. The theme of Grimslingers is all about reading the odds. Sometimes you are trying to take the measure of the other player and sometimes the deck of cards, but either way I feel challenged in all the right ways when I play this game. It’s in the gut more than the brain, and you aren’t spending your playtime working out mathematical formulae. For all the calculations in Grimslingers, the game plays surprisingly quickly.

The interactions that come from this simple dynamic is some of the most fun I’ve had gaming in a long time.

If you want to complicate the game further, you can choose to add Archetypes into the game. These represent qualities unique to your Grimslinger, such as Vampire or Witchborn, that grant special abilities and a singular powerful Signature spell. If you so choose, you can also add equipment into the game for even more options. These additional choices extend the game’s lifespan by giving players who are familiar with it new ways to challenge one another, adding new elements into the game without breaking it apart.

Of the three modes, two-player is the best distillation of Grimslinger’s core strengths. However, the three of more player mode still has a great deal to offer, provided you ignore the higher player counts. With that many people slinging spells in all directions, the tense standoff becomes more of a random mess, and there ends up being too many elements for anyone to keep track of. It’s careful management of your opponent’s strategy is necessary to make this game work. Therefore you want to play with a maximum of 4 players, or else you won’t understand why things are happening and the game is over so suddenly. At something like three or four players, or with teams, you find yourself open to new opportunities to strategize and gauge the actions of the opposing team.

In my playthroughs, these team games run much longer but almost feel like a different game entirely. Between turns, teams would sequester themselves to discuss the personalities and motives of the other groups before putting their cards down and readying themselves for the tense reveal. These interactions become all the more interesting when you and your teammate begin discussing how to synergize signature spells and abilities, and whether the opponents are counting on you doing so. If you want faster play, you are free to eschew this model entirely and play a more instinct based game.

The final mode of play is a cooperative campaign mode in which your characters travel along a map to explore the Forgotten West engaging in new encounters along the way. This mode adds many small features to the game which you can, if you choose, integrate into the main game. During the campaign you can level up, acquire new equipment for your deck, and occasionally get into encounters which change the way you play.

You will spend the campaign exploring the Forgotten West, gaining strength as you fight back its ever-stranger inhabitants.

This mode feels like a strange tack-on…until you start playing it. The story is actually well written. It makes this setting feel alive and acts as a tour of various optional rules you could integrate into the main game. It turned the Grimslingers universe into a populated place without sacrificing the mechanical integrity of the game. I find more and more often that games hint at a deeper setting without really exploring it, and sometimes dip into the legacy fad to entice players who want to learn more. Grimslingers, as a complete package, offers you three game modes as well as a self-contained story that you could play through in (I estimate) about six hours.

I would be remiss in not mentioning one of the most surprising features of Grimslingers, given its success: the art and game design both owe their credit to a single person, Stephen Gibson. It’s rare to see one person deliver so well on so many levels. I have put enough ink into the game design to deliver a short diversion into the art, but really it speaks for itself. These pieces are almost too beautiful to be put on anything as small as a card, but the worn yet mystical world they weave makes me want to immerse myself further into the Forgotten West. There is also a ton in this package, and I respect that a great deal. For $30, you will find a lot to offer here between the three modes. Even if only one truly appeals to you, this game is worth considering.

Now that isn’t to say everything is perfect. The campaign mode doesn’t give you much reason to play it once you have gone through the complete story, so it doesn’t quite function as a pure co-op game. After that point, you and the other players would best spend your efforts playing team games and tooling around with the various optional rules. You will want to add the extra rules in, because eventually the main game loses a bit of flair once you really get your head around it. It takes some trial and error deciding which of the additional pieces you want to fit into your game, and the process of doing so may be a drag for some players. (Alternately, you can play the expansion, the Northern Territory; I will post my review in a few weeks, once I have had enough time to continue playing it and letting my thoughts stew.)

Additionally, the text needs some editing. The rules themselves come across reasonably, but with a campaign mode that relies on long stretches of text, you often find the small issues with spelling and grammar to be grating. Some of the grammatical issues are also present on the cards, which are frustrating when you have to determine something’s effect. Finally, the card quality is suspect. There is something strange about the texture that makes them stick together, which is a problem given the amount of shuffling inherent to the game. I think the material was chosen in an effort to make them feel authentic, but during play you fill find the cards difficult to pull apart. For this reason and to protect the art, I would recommend sleeving these cards.

Grimslingers will have you beating the odds, slinging spells, and bluffing your opponents in wild west in more ways than you cant count. With three distinct yet satisfying modes and a wonderful presentation of art and story, you will find yourself coming back to this game to experience it in new ways. For a small price point and a portable box, it’s hard to find so much game anywhere else.

John Farrell is a legal aid attorney specializing in domestic violence, living in West Chester Pennsylvania. You can listen to him travel the weird west as Carrie A. Nation in the Joker's Wild podcast at: https://jokerswildpodcast.weebly.com/
Related Articles: Grimslingers, Tabletop
Share
Tweet
Share
Submit