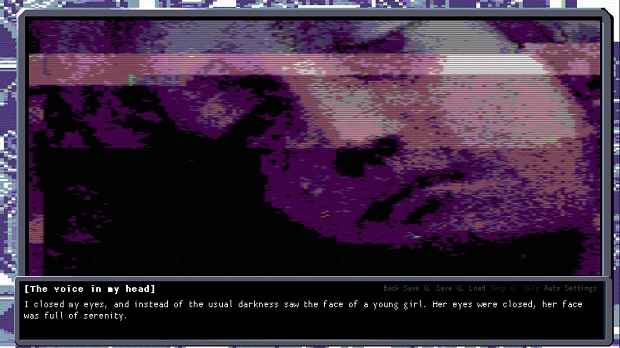 Cyber City 2157: The Visual Novel plays in a storybook style, much like other visual novels. You can save your progress on whichever scene you choose, and you can skip through sections you’ve already read. One difference is it’s bathed in an old-school tech aesthetic, complete with a frame that hearkens back to the Commodore 64 and loading screens involving cassette tapes. My experience with it left me both intrigued and confused. I wish there was more story to explore, but I also wish what’s already there was more polished.

The game opens with a dream about a spaceship taking off from the middle of a desert. Something malfunctions, so one of the astronauts is tasked with investigating. He’s noticeably frightened as he steps out of the vessel to inspect the exterior, and all the while the narrator surveys the scene without participating.

As the image fades away, he wakes up and groggily climbs out of bed. The first thing he does is check his email, where he finds an odd message referencing the dream he just had. Later that day at work, he overhears his colleagues chatting about a spaceship that recently launched, but they don’t include him in the conversation or offer up any more details.

The unnamed narrator is an introverted contract worker for a company that manufactures holographic copies of humans called Molds. It’s a way to keep your loved ones around forever, even though most people ask for perfect copies with any flaws removed and good qualities enhanced. He enjoys his work creating Molds, but he’s disliked by his colleagues and thus disallowed from knowing the company’s core activities.

Cyber City 2157 is told through two voices, the narrator’s internal monologue and his spoken voice. Though you might reasonably assume they represent the same person, it’s mentioned in passing that the thoughts are of an older brother and the words are the younger brother. Later you learn, when he is visited by Buddha in a dream, that he is actually two men reborn into the same body.

Besides this revelation, Buddha also shows him a vision of multiple doors and tells him he doesn’t have to die. This hints at the game having multiple endings. Through these branches of the story, you can uncover more about the city, traversing through the bustling streets, a strange and persuasive forest, and a mysterious graveyard.

As the title implies, the main character is living in a futuristic city. It’s a place where the sun never sets, just changes color with the time of day. Sometimes it’s pink or blue, and sometimes it’s the color of coffee with milk. In reading historical literature, he discovered unfamiliar concepts called “night” and “the moon,” but he hasn’t known them in his lifetime. They disappeared suddenly in the aftermath of an unspecified Incident.

One constant concern he has is the rapidly changing nature of the city. He’s never able to recognize his old friends, even though he swears he can briefly glimpse them walking past him in the streets. Every time he tries to escape the confines of the city, new skyscrapers and massive malls crop up as if out of thin air. He becomes so desperate he starts to record his ceiling to see if he can capture any changes. That’s part of what drew him to working with Molds, because they’re a sign of permanence. If they’re based on someone, that must mean that particular person once existed.

The question is: is the narrator truly a prophet, the only person able to perceive what’s happening in the city, or is he mentally ill? The evidence seems to support the latter, as this is an incredibly bizarre game. Cyber City 2157 is packed with surreal sequences and gruesome stories. Cannibalism, rape, mutilation, and religious extremism all make their appearances.

There are a lot of things to like about the game. The premise sparked my imagination, and the various paths you can follow all have wildly different conclusions. Though the story contains some brutal imagery, the lo-fi artwork doesn’t depict any gore. The soundtrack is excellent as well. It’s just the right amount of eerie, with music that matches both the futuristic vibe and the retro video game aesthetic.

I only have two issues with Cyber City 2157, but they’re both pretty big ones. First, the English translation is rough around the edges. You have to go into this visual novel with a hefty amount of patience, as there will be a lot of rereading. Some of the translation errors are understandable, even laughable, but others can affect how you comprehend what’s taking place.

Second, even though this game has several endings, it manages to leave a lot of loose ends. For instance, the Incident is brought up once in an old book then never mentioned again. It’s never explained why it matters that the narrator is composed of two men instead of just one. Details you want about the spaceship, the content of his unusual dreams, and a recent request for an identical Mold are never disclosed either.

While the story was beyond weird, it held my attention and I found myself wanting to know much more than I was given. There are even numerous endings where the game acts like it’s loading a second chapter but then it fakes you out and takes you back to the main menu. I was never in love with Cyber City 2157, but it caught my interest as the equal parts well-written and perplexing visual novel that it is. I guess a game described as postmodern shouldn’t be expected to provide closure, but I wanted something with a sense of finality.

Cyber City 2157: The Visual Novel is a strange and vibrant game about an ever-changing futuristic city. The branches of the story give you a lot to chew on, but most threads are never tied up. Give it a try if you enjoy open-ended stories that leave you pondering.

Sarah Marchant is an office admin for a nerdy t-shirt company. She has a soft spot for indie games, a passion for story-driven titles, and a weakness for cooking games and anything with zombies.
Related Articles: Cyber City 2157: The Visual Novel
Share
Tweet
Share
Submit