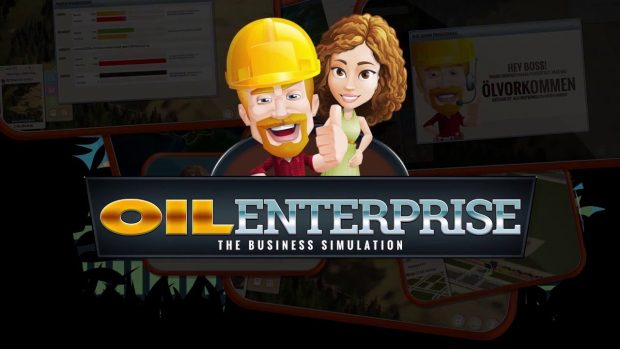 Growing up in a rural part of Colorado, I was always around oil fields and the oil industry. I used to gawk at the giant pumps, and wonder what it took to put up these behemoths. Oil Enterprise, Crafty Studios newest game, let me see what the oil world had to offer. It allowed me to make oil pumps, run oil fields, and build an empire, but it also drove me away from the industry. It is not that it is a bad game, but Oil Enterprise just doesn’t have enough content to make it a great tycoon game.

The visuals were a massive letdown. The actual terrain looks amateur and simple, and it didn’t get much better. The actual machines look a little better but with the exception of a the actual oil pumps nothing moves and there is no animation. If I didn’t pay attention to the numbers moving I would have had a hard time telling if the game was playing or paused. During my playtime I was constantly underwhelmed by not only the graphics but the presentation as well. Nothing seemed polished and I was let down by how the game looked and felt.

The sound effects and music also did not help the game in any way. Mostly small sound bits made up the machinery, followed by some very light, yet boring music. The soundtrack was not horrific but didn’t fair much better than elevator music. I spent a lot of my later time in the game with the sound off, listening to my own music library. Both visually and auditorily the game lacks polish, feels amateurish, and lacks interesting things to see or hear.

The gameplay in Oil Enterprise was a toss-up for me. With so little content, it boils down to setting up an oilfield with the cheapest machines and then upgrading as money comes in. With the lack of visual splendor, which could have made this game so much more, it really is just a numbers game. You can sell your oil on the free market, which comes down to selling as the price rises, or getting contracts. It became glaringly clear just a couple hours in that contracts are not only the easiest way to go but also the best. With guaranteed money and a place for your oil reserves to go, contracts became the only way for me to play in the end. The only downfall to this is that if you miss a contract or cannot fulfill it in the early game, the money you lose can easily put you out of business and have you starting from scratch. There are also missions you can do instead of freeplay but they also boil down to hitting the required steps and then watching numbers to decide when to sell, the market price, or how much you need to complete contracts.

I was not impressed with the game as a whole. It wants to be a fun, cartoony, and unique tycoon game, but misses the fun. With the lack of content I was bored within an hour or two and as time went on; playing the game becomes a matter of watching numbers in a very boring way. Some people may enjoy a game of watching numbers and acting on them, but with the lack of machine choices, substandard visuals, and dull gameplay I found myself not caring. As your equipment breaks down and the oil field needs more security or research, I found myself more compelled to just start a new oil field because it at least was more hands on and took some effort, versus waiting for contracts and selling on the market non-stop.

That in itself is the game’s biggest downfall. Even after multiple fields, upgrading my corporate building, and pushing contracts, I was never compelled to do so. I enjoyed it in small chunks and liked seeing things like earthquakes and other changes in the virtual world that changed the market price, sometimes drastically, but it was never enough to make me want to keep going and to keep building my empire. It becomes a game of setting up oilfields, pretty much all the same: upgrading, fixing, and watching the price. I never felt like I had a reason to do this and the game never seemed to want me too. There aren’t locked pieces of equipment, special areas, or anything that would make me want to keep playing, unless you count the Steam Achievements which was not enough to keep me going.

Oil Enterprise is a game that is lacking in almost all departments, and never comes to compelling gameplay. If you like watching numbers more than actually building an empire, you may enjoy this game, for everyone else it just never seems to hit the mark.

Growing up in a small Colorado town, Bryan has always had plenty of time to play games. PC is his first choice of tech followed by the PS4. Graduating at 16 Bryan knew he wanted to be a writer and wanted to combine his love of games into that and found Gaming Trend in 2012 where he quickly became a member and started writing for them as soon as he could. He is still at Gaming Trend, but now has 2 kids, a puppy, and a lot less time to play the games he loves, but he always finds a way to get back into gaming.
Related Articles: Oil Enterprise
Share
Tweet
Share
Submit