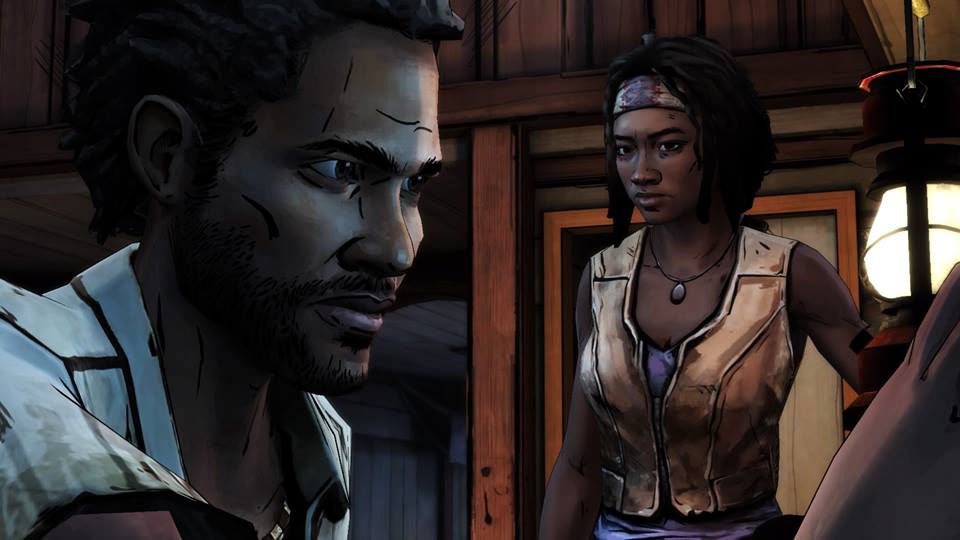 While The Walking Dead: Michonne already speaks to Telltale’s ability to write compelling drama and characters, it does signal that the property it pulls from may have lost its novelty as years have gone by.

Episode one of this three-part series, “In Too Deep,” begins with Michonne, The Walking Dead’s stoic swordswoman, having joined up with a group of sailors searching for missing friends who they fear have been lost at sea. After events lead Michonne and fellow associate Pete leaving the ship in search of supplies, the two manage to get caught up with members of a settlement, one that seems to have a corrupt and violent undercurrent.

As someone who has played both of Telltale’s previous seasons of The Walking Dead and watched several seasons of AMC’s show, nothing in Michonne’s first episode caught me off guard. Michonne faces the same difficult choices I’ve seen every other character in this universe face, whether it was choosing to attack someone in order to take their supplies, betray someone else in favor of her own interests, or talking someone down from killing another in blind rage.

Characters like the new “unhinged and violent leader” Randall seem directly evocative of past characters in the franchise, spitting out cliched dialogue about how he and Michonne aren’t so different, insisting she is a cold-blooded killer when all I, as the player, had done is kill walkers in self defense. As a property, The Walking Dead feels like it is spinning its wheels and recycling the same characters and plot points. While this doesn’t diminish the quality of Telltale’s writing in an isolated package, much of what the studio is doing in Michonne feels like old hat, constantly retreading what little material the post-apocalyptic setting seems to be able to support this far into its lifetime.

While Michonne’s own struggles fall in line with these problems, Telltale’s portrayal of her guilt and inability to forget those she’s lost is still affecting, and makes for some powerful PTSD-driven moments. “In Too Deep’s” opening segment is especially memorable, concisely showing how Michonne has changed since The Walking Dead’s universe became a zombie-ridden wasteland, while also demonstrating just what eats away at her psyche.

Other sections of Michonne fare less favorably, with an interrogation section sticking out most as one that lacked clarity in its writing. I found it difficult to discern just what what characters were discussing at points, meaning I was unaware until midway through a dialogue exchange just what questions my responses were actually answering, leading to contradictions in character’s testimonies, and problems for me in the future.

While playing as Michonne, an established character within The Walking Dead universe, I noticed my making choices as this character carried an even greater sense of inevitability than Telltale’s games typically suffer from, as already I’m beginning to feel as if the characters I’m interacting with are ready to put Michonne in a box regardless of what actions I take. This felt most evident after I finished “In Too Deep” and watched the sneak peek of the next episode, where characters were insisting Michonne is a sociopath who is itching to kill, despite the fact that I as a player have no desire to play the character as such.

This was something I felt when playing The Wolf Among Us as well, and even to an extent in Tales from the Borderlands despite those characters being original to Telltale’s games. It’s beginning to feel like a recurrent theme that Telltale’s writing does not cater to those who are looking to roleplay a character in more than one way. It may be time for Telltale to re-evaluate its way of writing to accommodate more ways players might want to portray their characters.

“In Too Deep” sets up a great character in Michonne but also feels like it’s restricted because it’s part of a story that is retreading old waters. The quality of Telltale’s writing is at its strongest at some points but feels as if it’s struggling to maintain coherence in others. Given the monthly release schedule Telltale is on for this series, it’s unclear at this point if the studio will have the time to change any of this up, but we’ll know more when episode two, “Give No Shelter,” launches next month.

The Walking Dead: Michonne "In Too Deep"

The Walking Dead: Michonne feels like twice the amount of well-worn territory than Telltale series typically deal with, and much of that comes from its existing within a property that is reaching the ceiling of its dramatic potential.