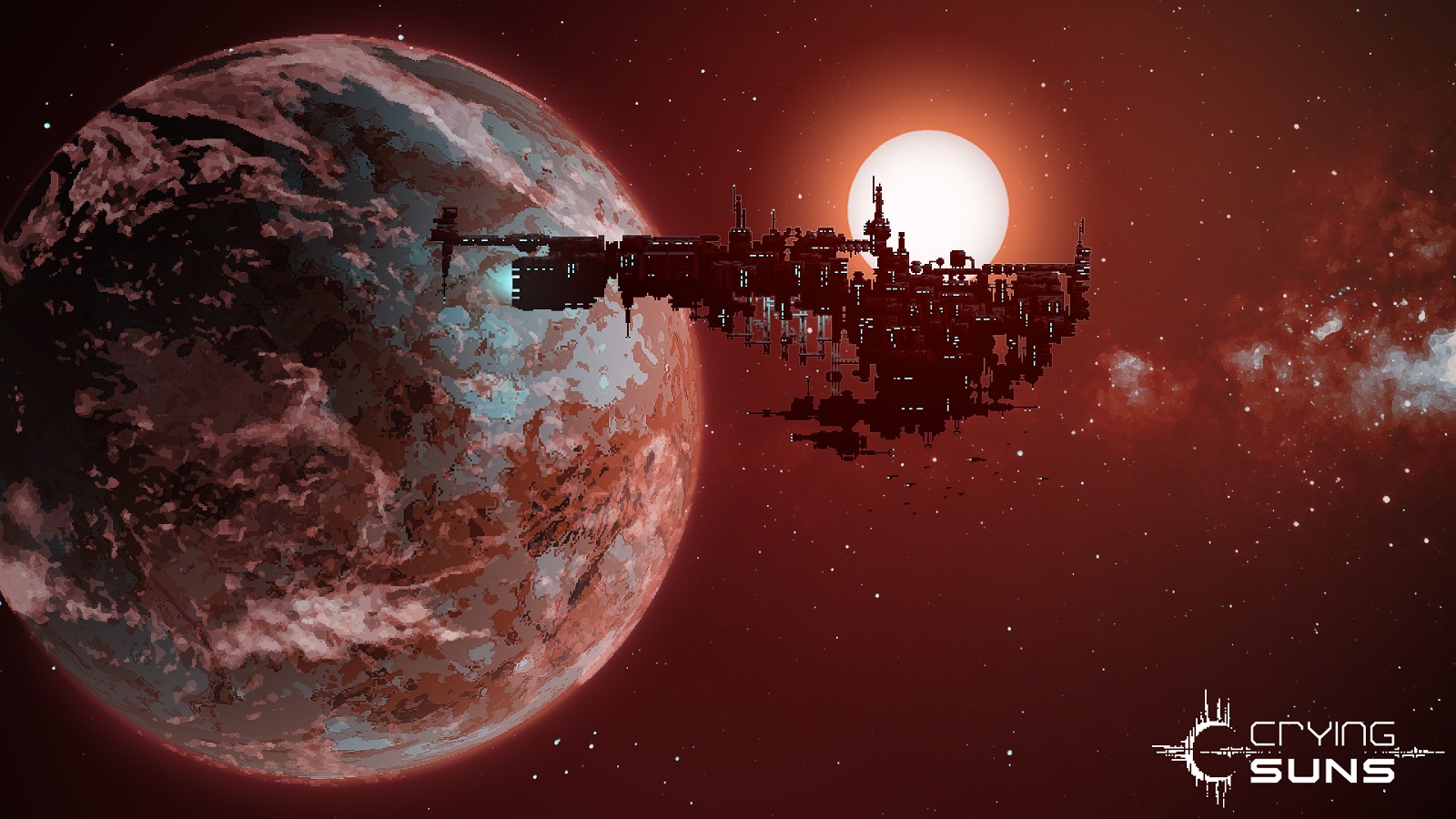 Described by developer Alt Shift as a “tactical rogue-lite”; Crying Suns tests your nerve as much as it demands the careful planning and consideration of each move you make. Comparisons to FTL: Faster Than Light (From Subset Games, 2012) have been drawn, which certainly fair and understandable; but does Crying Suns differentiate itself enough or like its characters, is it just another clone?

Set against a space opera backdrop, players awaken as a clone of Imperial Admiral Ellys Idaho to take command of a battleship and set out among the stars in an effort to solve the mystery behind the fall of the Empire. The setting is apparently inspired by the likes of Dune and Foundation (Frank Herbert and Isaac Asimov, respectively); I certainly see the influence, but I also get a distinct Battlestar Galactica vibe from the game. Which, in my opinion at least, is never a bad thing; a lone battleship on the run from powerful enemies, making do with limited, ever dwindling resources and having to think on their feet where every decision is a gamble.

Crying Suns really forces you to consider each and every move throughout this procedurally generated universe. Is it worth checking out an Anomalous signal which could turn out to have precious resources or maybe a powerful new piece of equipment? Or, do you risk damaging your ship in what might be a trap? You could check every location in a star system, but will you have enough fuel to reach the next system? There are two main resources to worry about: Neo-N, which is fuel for your ship; and Scrap, which is used both to upgrade and repair your battleship, and as currency. You’ll mainly be harvesting Neo-N from the stars you encounter when arriving in a new system, but it can be found at different signal sources or awarded through trading and other interactions with various NPCs you’ll encounter. Scrap is also found at signals, can be stolen or gathered from enemies, and can be traded for. The problem is, you don’t know what you’ll find until you commit to an action. Moving to investigate a new location will always cost you 1 unit of fuel, thus making you carefully assess if it’s worth risking that very finite resource only to potentially find nothing of worth. Do you give scrap to a struggling civilian ship, which could equally result in them handing over something very helpful to your cause? Or it could simply see them move along with hardly so much as a “Thank you.” I have rarely prayed to the holy RNGesus so honestly and hopefully. 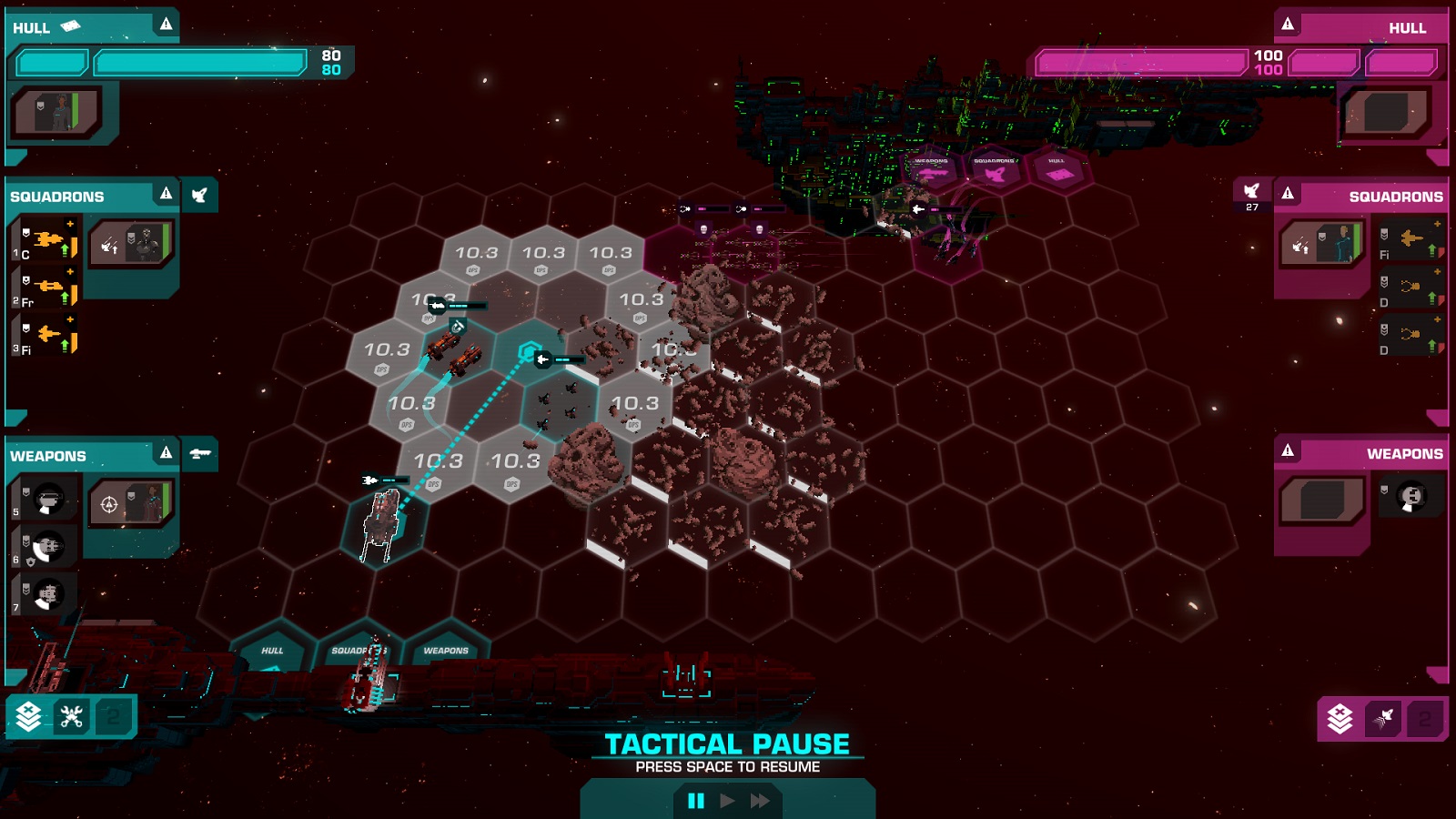 The writing does a good job of making characters feel fleshed out and human; even Kaliban, the mechanical A.I who’s ever-present and sort of reminds me of Commander Data. I got attached to my officers on a longer run through the game; feeling dejected if they died and I found myself genuinely interested in a random NPC I’d encountered. Some seemingly honest, desperately-in-need characters, might turn out to be just that. Or perhaps con artists. Or maybe religious zealots. Whatever the case, these often brief encounters kept me engaged while always second guessing the individuals in question. Ultimately these characters come across as having their own goals and agendas, be they helpful medics or villainous thugs; making the universe seem more real and alive. It makes for efficient character building in the limited, bite-sized portions of screen time they get.

Without dishing out spoilers, the overall story is engaging and I wanted to see what happened next; like a good page turner. As mentioned earlier, you are a clone, as are your crew, which is how the game explains away the respawns after a failed run. The basic plot goes like this – The galactic empire has been peaceful and doing pretty well for 700 years, and humans have in that time become reliant on all-powerful mechanical servant race known as OMNIs, who have suddenly shut down. Kaliban, itself an OMNI, is stationed on a top secret cloning facility that has lost contact with the Empire. Deducing that something is afoot, Kaliban wakes you, the clone of a great Imperial Admiral, to help discover what fate has befallen the Empire and set things right.

The story maintains a good sense of mystery and urgency and paints a convincing picture of a once great empire undone through a dependency upon what was once its savior: The OMNIs. This theme carries through to interactions with NPCs, who have lost the ability to do even basic things without the OMNI there to assist, such as farming or even maintaining civil order. Not wanting to talk to much about the story — it is best experienced first hand — I’ll wrap up here by mentioning another element that sets the scene: the music. In a nutshell, the soundtrack is great. It has an ethereal, Blade Runner feel to it and compliments the tone of the game; conveying the same sense of mystery that the writing is putting over. 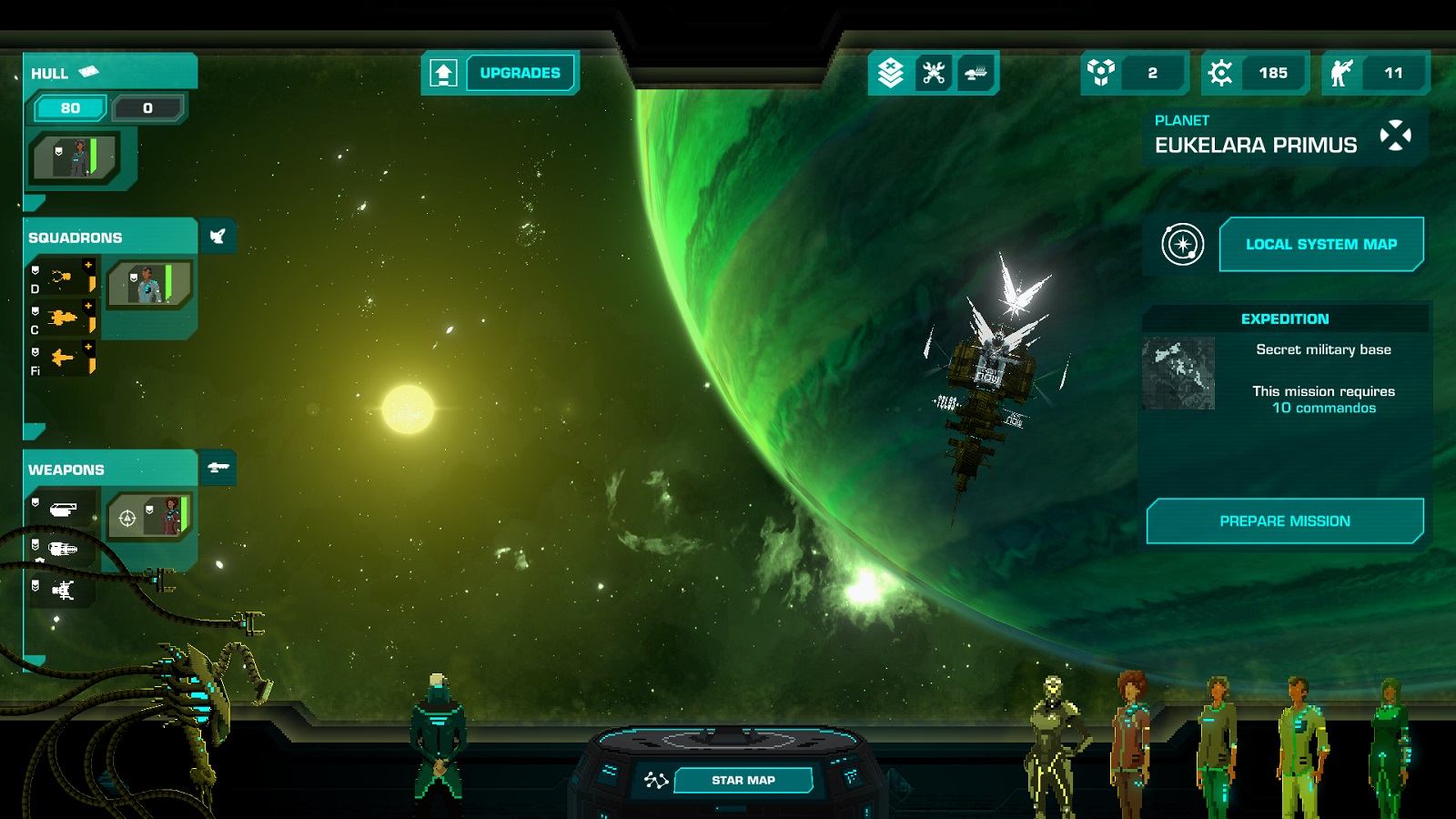 ALL POWER TO SHIELDS!

Combat in Crying Suns takes place on a tile system; your ship is parked on one side, enemy at the other, exchanging fire from across the screen. You’ll deploy squadrons to both defend and attack, with numerous units available. These typically fall into one of three main types: Drones, Fighters and Frigates. How many different squadrons you have or can deploy at once will depend on how efficiently you’ve searched for them or how well you spent your scrap. Each type of squadron is effective at countering one of the others while being weak against another. Steps are in place to ensure you cannot just spam out waves of squadrons; there is a timer when deploying a new squadron as well as a cooldown after one has been destroyed. Similarly, weapons on your battleship have cooldown times which vary depending on the specific weapon; some being effective directly against the enemy battleships, others more so against squadrons; some giving area-of-effect damage or debuffs to incoming squadrons.

You’ll have to keep an eye on what the enemy is deploying or firing at you, and time your response accordingly; otherwise you end up in a futile rock-paper-scissors scenario, wasting resources; it costs precious scrap to repair lost hull and damaged squadrons. It’s an engaging enough combat system that requires planning and monitoring what’s going on. It gets a bit brutal; say when you’ve had a rough fight, only to find yourself limping straight into another one immediately thereafter. The same can be said when it’s been tough gathering upgrades and resources only to suddenly face an enemy who is vastly outgunning you. Cue respawn.

Crying Suns opts for a more simplistic, pixel art graphical style. Don’t let that fool you, the game looks great and has a real charm to it. Lighting bounces off of characters as a star illuminates the bridge; battleships explode when defeated and the overall color palette works very well, lending to the futuristic theme of the game. Objects and vessels have enough detail that you can see how they are supposed to look. Characters are given the attention so that you can make out their form and expression, all the while leaving just enough to your imagination.
Another boon of this graphical style is that it should run fine on just about any semi-modern hardware, with a planned release on iOS (Windows and Mac OS X at time of writing). That does beg the question, could we see this on Nintendo Switch? It’d work really well on the touchscreen and the game style would lend itself well to the portable form factor. I’d definitely double dip for a Switch version; here’s hoping.

Crying Suns is a characterful rogue-lite that really sets its sci-fi tone well from the get-go; strong writing and a great soundtrack build the universe while the high stakes nature of every move is engaging and keeps every run as fresh as the last.

Grumpy gamer from UK with a keen interest in retro gaming and modding. Can also be found cycling up and down mountains, walking dogs, watching Sci-Fi and reading all sorts of books.
Related Articles: Crying Suns, Indies
Share
Tweet
Share
Submit