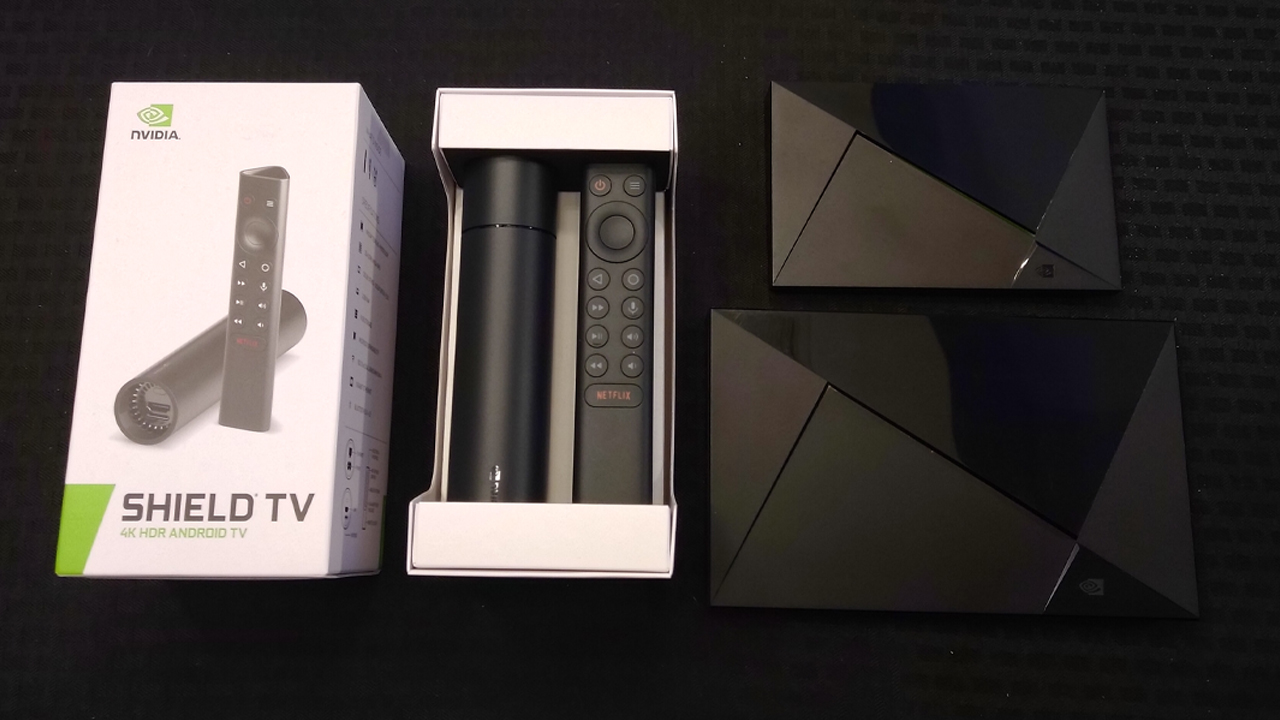 It’d be easy to look at the new form factor and assume that’s the story with NVIDIA’s newest version of their ever-popular Shield TV. It’d be equally as easy to nod at the 25% increase in horsepower under the hood and think that’s the allure of this standard model. In both cases, you’d be missing the real reason to pick up NVIDIA’s newest device, as well as a peek into the future of cutting edge media streaming devices.

The NVIDIA Shield TV came out in 2015, with a smaller form factor and a few other minor tweaks in 2017. This newest refresh brings a litany of upgrades both cosmetic and performance-based, but their goal has obviously not changed — to be the most advanced media player providing the best streaming experience. In my case, I use the Shield’s capability to act as a server for my media content, as well as a client to access it. Plex, YouTube, Hulu, Amazon Prime, Google Play, and many more company-specific apps like those for ABC, Fox, Showtime, and HBO Now have allowed me to cut the cord completely. Apps like Pandora, Amazon Music, and Spotify let me fill my rooms with music. The Shield TV is a one-stop shop for media, and it has become the center of my movies, shows, and music entertainment for nearly the last five years. None of that has changed with this newest iteration, but that isn’t to say there’s nothing new under the sun.

Obviously this latest refresh of the Shield TV gives NVIDIA the chance to swap a bit of hardware. The Tegra processor in the previous models has been replaced with a new Tegra X1+ offering upwards of a 25% boost to performance. This is most immediately evident when navigating and opening content. On the older boxes, I’d occasionally get a brief but spurious popup declaring that the “connection to my server wasn’t fast enough” to deliver whatever content I was opening, but that seems to have completely vanished. In fact, setting the device up from scratch was lightning- fast as selecting an app for installation jumped straight to loaded and ready almost instantly. 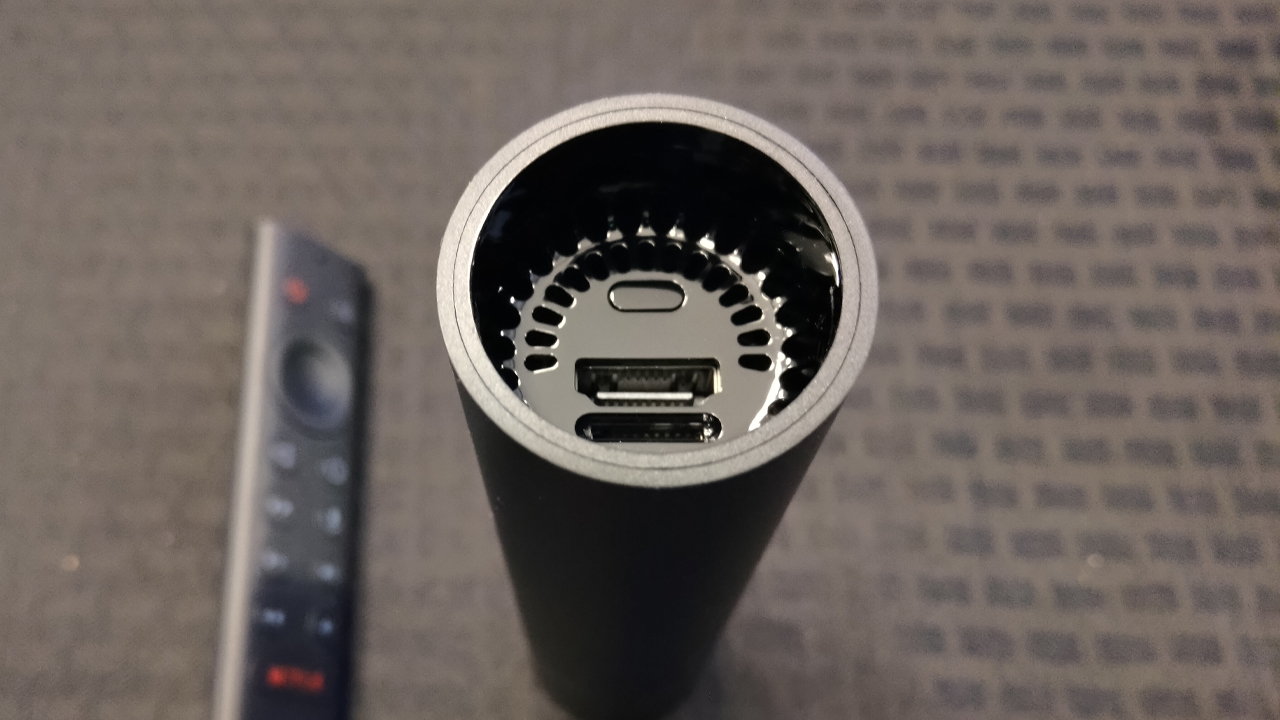 The HDMI 2.0B slot, MicroSD slot, and the new find the remote button for the NVIDIA Shield TV (2019)

In terms of form factor, this year’s Shield TV is a radical change, eschewing the rectangular look of its two predecessors for a tube configuration. The reasoning is simple — this little guy is meant to be invisible. Being extremely lightweight, it’s the sort of device you could safely strap it to the back of your TV and never look at it again. While port lists and specs aren’t usually the sorts of things you’ll want to dig through, this one carries a few tricks up its sleeve. The 2015 and 2017 Shield both used a proprietary power cord, much to the chagrin of those who ever had to swap one out. Though it looked like a USB-C cable, it most assuredly was not. Here, however, they’ve replaced the power cord with an easily-replaceable standard C7 power cord. Dog chews, frays, and any other needs for replacement are completely resolved — thanks for listening, NVIDIA. Alongside this power port lies the Gigabit Ethernet port, as well as four small openings for air circulation courtesy of small integrated fans. On the other end of the tube lies the MicroSD slot, as well as the HDMI 2.0B port. Unfortunately, NVIDIA chose not to push up to HDMI 2.1, which does hardware-limit the device from hitting 4K resolution at 120fps, or 8K at 60fps. While there’s little to no content that will take advantage of it currently, it seems likely we’ll see another version of the Shield TV in the future with additional horsepower and a newer port type. In the meantime, it’s fairly likely it won’t be much of a miss for the near future. 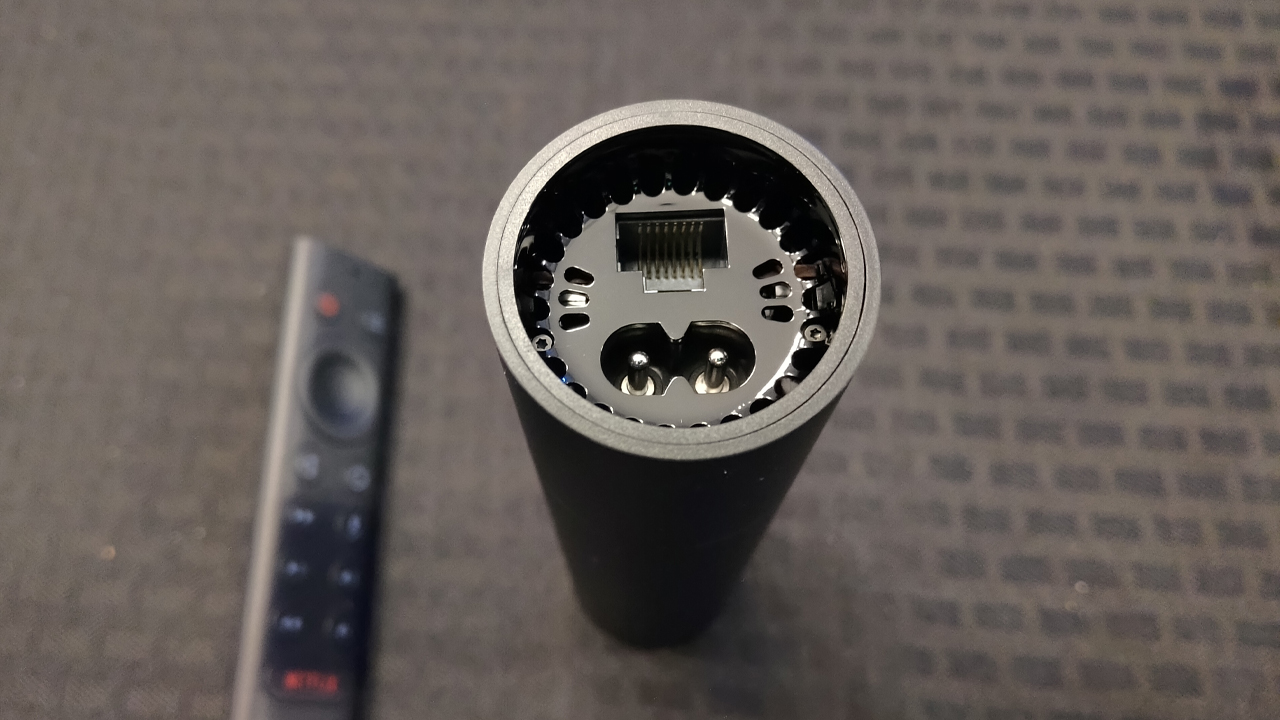 To go with the new form factor, this iteration of the Shield TV also gets a brand-new remote control. A rounded-edged elongated triangular shape, it fits naturally in the hand. Gone are the watch batteries, replaced by two replaceable AAA batteries with a reported 6 month of useful life. On the face of the controller lies motion-activated backlit buttons, a microphone hole to support voice search and controls, and a large Netflix button in the bottom third to pull up the app natively. The smooth, thin, and fingerprint-attracting remote of the past wasn’t bad, but this one is certainly better. It feels more ergonomic, and the rebuilt circular pad with it’s recessed selection button seems to be more responsive, and now sports infrared controls built in natively. This helps if you control your TV or audio through an IR blaster. It would have been nice if NVIDIA had given us something of a universal remote option to take full advantage of the Bluetooth 5.0 IR Bridge tech baked in, but as a standalone it works incredibly well. The last ace up its sleeve comes with the last button on the Shield TV cylinder itself. The power button also doubles as a lost remote locator. With a tap of a button, the remote issues a series of repeating chirps that sound like Morse Code to help you locate it. If your media is tidy, but your world is cluttered, this could be an incredible boon for you.

Underneath the hood, there are plenty of new features to be excited about, most notable of which being a new AI-enhanced video upscaling system. Thanks to the new Tegra X1+ processor, the device is now capable of upscaling older video content closer to 4K resolution, sharpening the overall image quality in the process. Using the NVIDIA GPU, the Shield performs a AI-driven deep learning look at the image, combines it with traditional upscaling we’ve seen thus far, and folds them into one crisp final image. I could describe it in greater detail, but I was able to capture it in motion. For the first video, I took a look at the new Star Wars: The Rise of Skywalker trailer. In this video you can see the demo mode turned on, with the AI Enhancement set to Medium aggressiveness — the default. Holding the hamburger button on the remote, you can showcase the tech in action. Here’s a look at what this can do for an already crisp video: 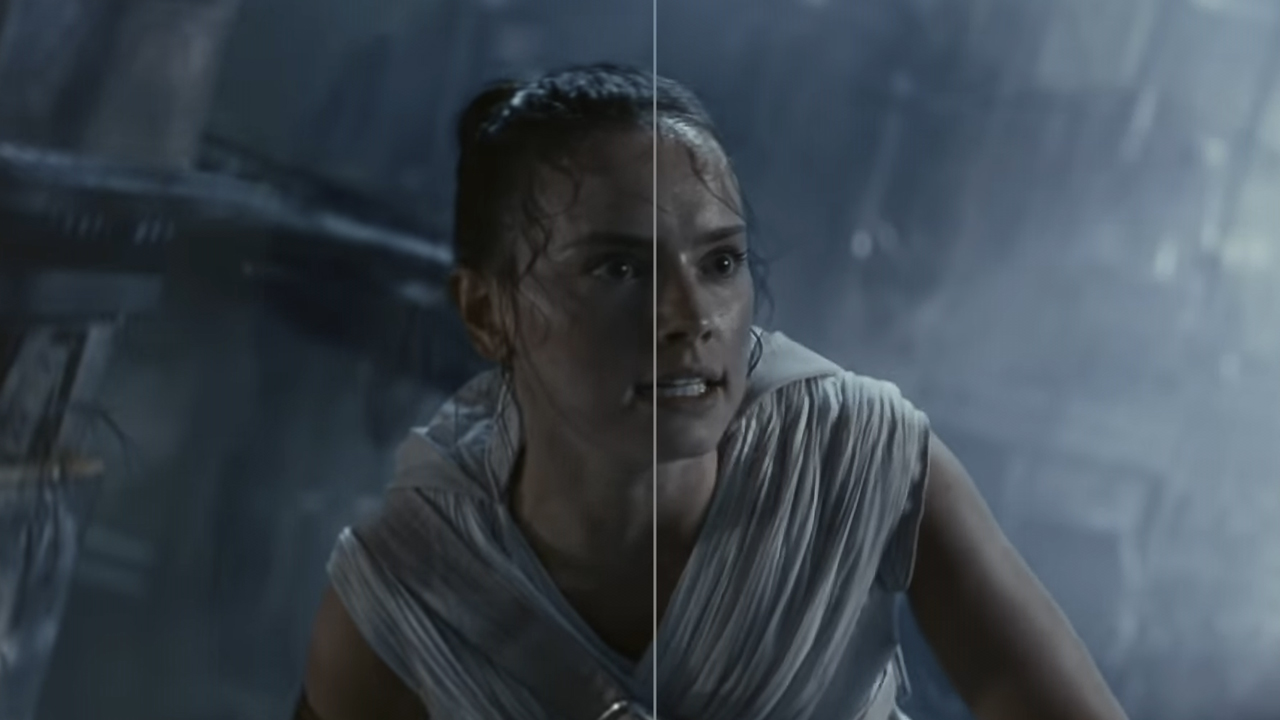 Basic upsampling on the left, AI-Enhanced on the right.

I also wanted to see what this tech could do for a reasonably recent video that was running at 720p, so I grabbed a few moments of the first episode of Brooklyn Nine Nine. As you’ll see, the improvement is more pronounced, with much of the blurriness sharpened up into a much clearer image.

Reaching far further into my back catalog, I have a beloved PBS show called Wishbone. It’s about a cute little pup who, with the help of his owner Joe and his friends, re-enacts tales like Mark Twain, The Hunchback of Notre Dame, Frankenstein, and The Three Musketeers. It is easily one of my favorite shows of all time, but it’s also from a time when 480p television was the norm. As you can see in the video below, the upgrade in image quality results in sharper contrast in little Soccer’s eyes, and far less blurriness on his fur. Text sees the largest upgrade — a boon for an older show. While this tech doesn’t work for video games yet, (games typically run at higher framerates) there’s nothing stopping NVIDIA from enhancing this tech in the future. It’s probably one of the best feature improvements in this version. Unfortunately, due to the processor change and the power it brings, as well as a total re-architecture of the software interfaces with it, these improvements won’t be coming to the 2015 or 2017 models.

Beyond the AI upgrades, there are a handful of other much-requested tech upgrades. This iteration, as well as the Shield TV Pro version, now natively Dolby Atmos and Dolby Vision. Additionally, the Shield TV also supports Dolby Digital+ and Dolby Vision natively. For those of you who have technology with these certifications, it’ll be nice to take advantage of the enhanced audio and arguably better high dynamic range lighting at 4K resolutions and with properly decoded surround sound.

While the previous versions of the Shield unofficially supported the Xbox One and PlayStation 4 controller, sanctioned support was reserved for the official controller. Now, NVIDIA has recognized that not everyone wants to use their optional peripheral. The device now adopts a “play your way” strategy, with more official Bluetooth support for Xbox One and the PlayStation 4 controllers arriving by the time you read this review. As a result, there is no longer a version with an included controller in the package. 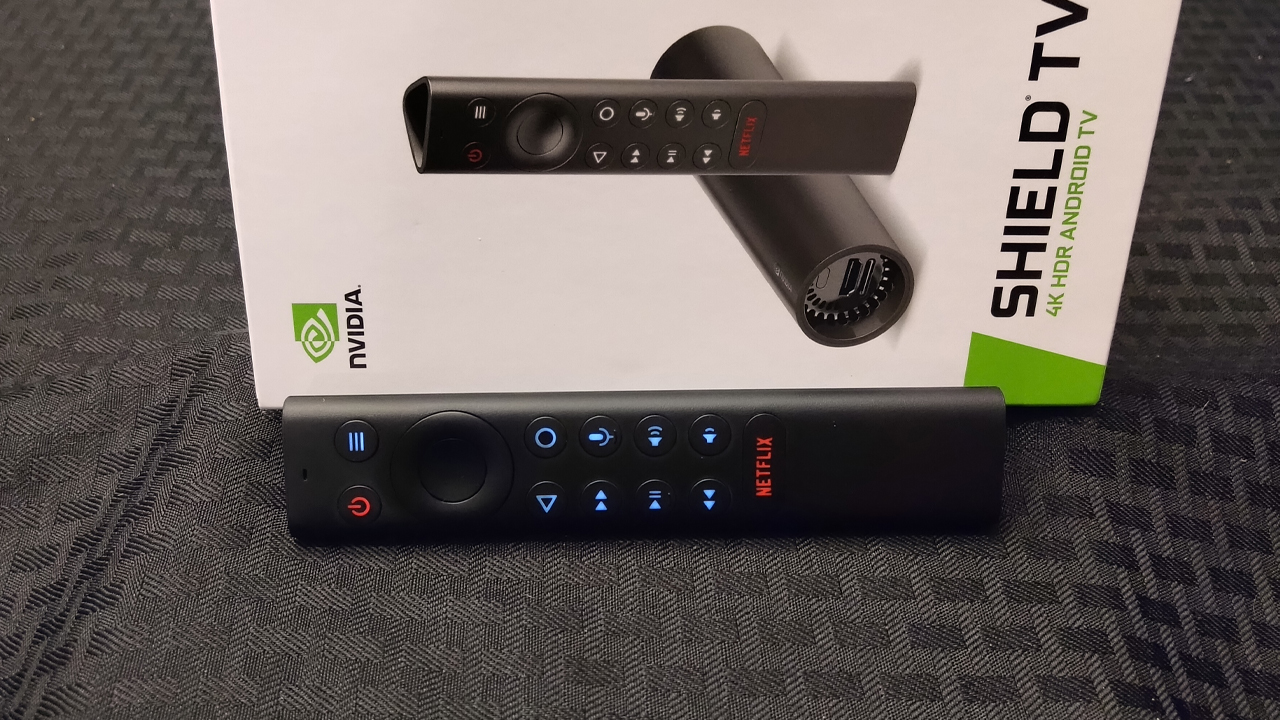 The triangular backlit remote is a large step up from its predecessors.

There is one drawback that may or may impact which version of the 2019 upgrade you’ll buy. While both versions of the Shield TV support Gamestream (streaming from a GeForce-enabled PC that you own — I tested and it works perfectly) and GeForce Now (streaming from NVIDIA’s hosted service for a monthly fee, though that’s still in early Beta), the smaller of the two Shield TV devices does not support the most recent efforts from developer Lightstream. That means you won’t be able to play games like PUBG or Fortnite 2.0 natively.

If you are a Plex devotee, as I am, you’ll probably need to know the largest difference between the two devices — Plex Media Server support. The Shield TV Pro is able to act as a whole-home server, capable of slinging content to your entire house. The smaller and hideable Shield TV, however, is only supported on the older Shield TV models and the newest Shield TV Pro. As it has only 2GB of RAM instead of 3GB like i’s larger counterpart, its job is that of a client. It also carries 8GB of internal memory instead of 16GB like the Shield TV Pro, both of which are likely the reason for the price difference as the Shield TV Pro is $199, versus the Shield TV at $149.

The newest iteration of the Shield TV delivers with a new form factor, some amazing tech to clean up image quality, and native support for Dolby Digital, Dolby Atmos, Dolby Vision, and upcoming streaming support with GeForce Now, powered by a brand new processor to give it a little more zip. The new controller hits all the right notes with fresh features and locate functions. The only real drawback is the lack of Plex Media Server and Lightstream game support, either of which may be a non-factor for you. Best of all? Once you mount it, you’ll never have to see it again.

Ron Burke is the Editor in Chief for Gaming Trend. Currently living in Fort Worth, Texas, Ron is an old-school gamer who enjoys CRPGs, action/adventure, platformers, music games, and has recently gotten into tabletop gaming. Ron is also a fourth degree black belt, with a Master's rank in Matsumura Seito Shōrin-ryū, Moo Duk Kwan Tang Soo Do, Universal Tang Soo Do Alliance, and International Tang Soo Do Federation. He also holds ranks in several other styles in his search to be a well-rounded fighter. Ron has been married to Gaming Trend Editor, Laura Burke, for 21 years. They have three dogs - Pazuzu (Irish Terrier), Atë, and Calliope (both Australian Kelpie/Pit Bull mixes).
Related Articles: Hardware, NVIDIA Shield TV (2019)
Share
Tweet
Share
Submit