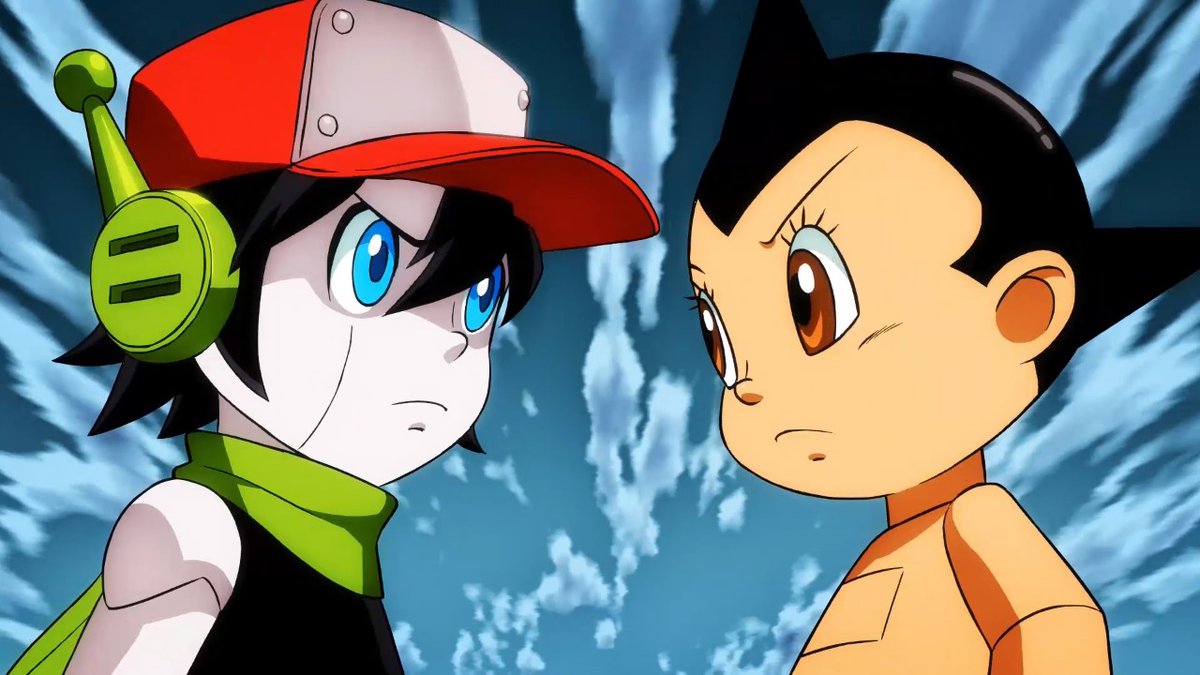 One half crossover fighting game and one half falling-block puzzler, Crystal Crisis is one of the more unique titles I’ve experienced on Nintendo Switch. The game is a patchwork of ideas and inspirations, drawing from the pantheon of Nicalis properties and famous puzzle titles to create a game that feels familiar yet decidedly its own project. Pitting indie icons like Cave Story’s Quote and Binding of Isaac’s Isaac in a puzzle-battle to the knock-out is novel and engaging—if somewhat rough around the edges.

The setup of Crystal Crisis isn’t particularly compelling—there’s a powerful crystal, and it’s causing a crisis. However, considering that Crystal Crisis is first and foremost a gameplay experience, the lack of an engaging narrative thrust only becomes a point of contention in story mode—which we’ll get to soon enough. The crux of the experience is the gameplay, and fans of puzzle titles such as Puyo Puyo will find it familiar yet unique enough to feel fresh. Upon picking your fighter from the game’s roster, you’ll square off against another character in a best of three block-dropping beatdown. Colored cubes will fall from the top of your field in twos, and your job is to arrange them together by color as you rotate the falling blocks and wrap them around the edges of the screen to land them in optimal positions. While it’s a fairly staid concept for a puzzle title, Crystal Crisis’ conceit is that blocks don’t disappear automatically when a certain number are chained together—instead color chains have to be manually broken by dropping a like-color crystal onto them. This causes the blocks to shatter on your board and be punted to the opponent’s field. However, unlike Tetris or Puyo Puyo, your opponent doesn’t receive junk blocks, but instead regular blocks locked behind a timer. Once your opponent has dropped a certain number of their own blocks after receiving a tumult of blocks from you, your barrage will revert from locked, timer blocks to typical colored blocks for your opponent to use. 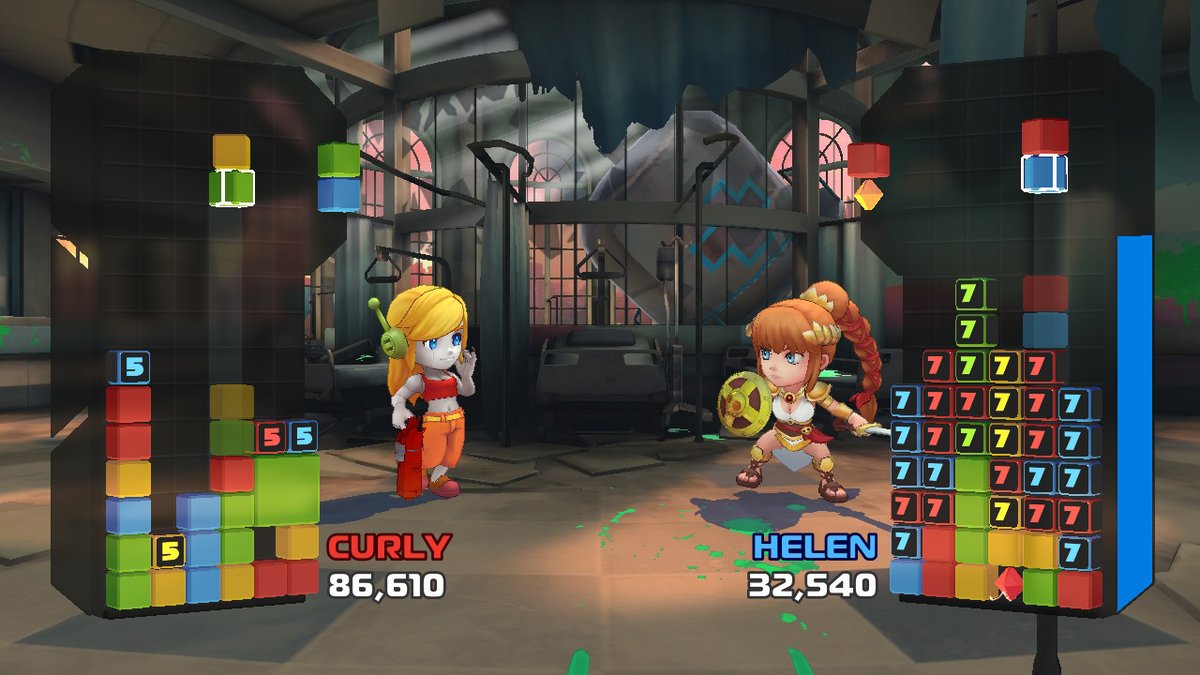 While I found these added mechanics to initially be cumbersome, after putting a bit of time into Crystal Crisis, I appreciated the amount of nuance and strategy they add to the game. When I play Puyo Puyo, all I’m considering is how to optimize my board to drop combos on my opponent, and by and large my opponent is attempting to do the same. In Crystal Crisis, there is more room to experiment and try new strategies. Going for combos is certainly a viable strategy, but that isn’t the only way to approach the board. You could simply go for speed, dropping many small crystals to spit continuous blocks onto your opponent, which we’ll touch on soon enough, you could bide your time, dropping pieces to create larger squares in rectangles which deal more damage, or create long single-block snakes which cascade across the board when destroyed. The ability to tailor your strategy to your preferred playstyle or simply experiment adds a lot of depth to the combat and keeps each round feeling fresh instead of locking you into a singular track toward victory.

Regardless of which strategy you adopt, though, clearing blocks will fill up your special meter which can be unleashed either defensively or offensively. Using your special defensively will allow you to reshape your board in one way or another, whereas using the special offensively allows you to reshape your opponent’s board. Each special is different depending on which character you choose to play, and while this is interesting conceptually, it feels rather unbalanced in execution. Some characters have special moves which simply don’t feel as useful as others, thusly I’ve spent the lion’s share of my time in Crystal Crisis with Curly as I find her special to be a near trump card. While others have rather situational special moves that can come through in very particular circumstances, I haven’t found any reason to adopt several of the roster’s characters because their specials simply aren’t useful enough of the time. Beyond the issue of unbalanced special attacks though, the gameplay in Crystal Crisis is fundamentally solid and largely enjoyable. I found myself constantly engrossed in the puzzle strategy, often entering into the same sort of hypnotic trance I find myself in during a particularly intense game of Tetris 99. While the gameplay is roundly well-executed, the presentation and technical aspect of Crystal Crisis leaves something to be desired. The game has a cartoonish style that pops with bold character designs and saturated colors but looks decidedly flat with a lack of texturing and lively backgrounds. However, that simply leaves the game’s aesthetic feeling inoffensive, not particularly bad. 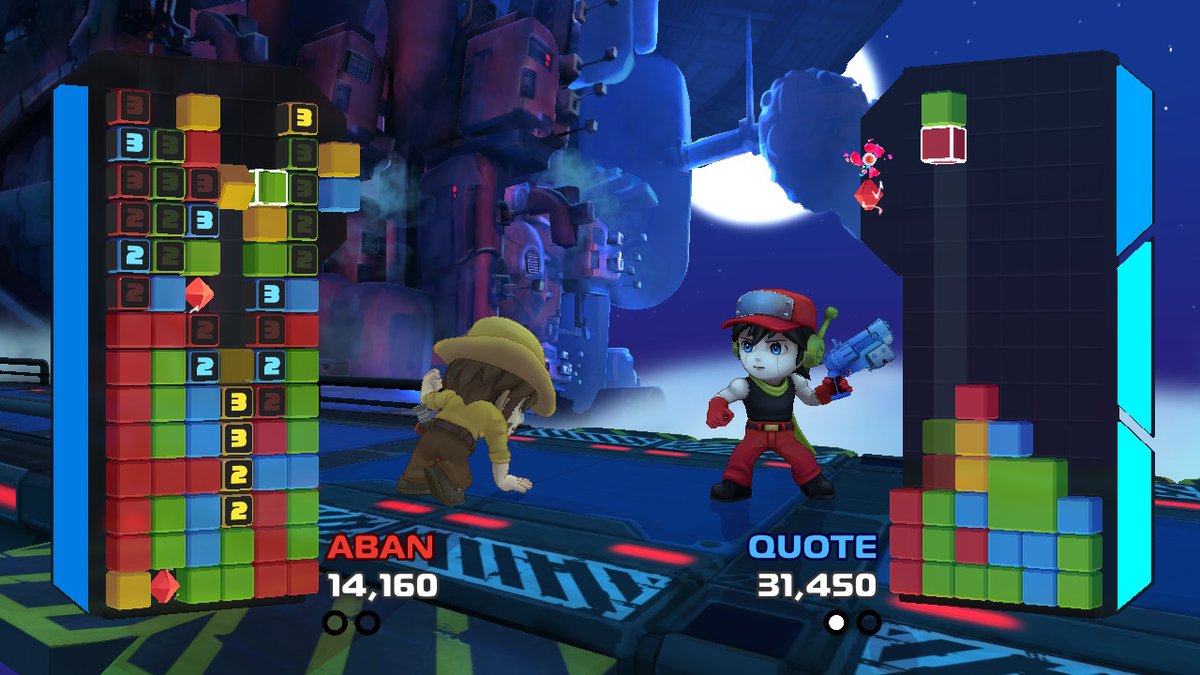 From an aesthetic perspective, the only aspect of the design which proved to be an abject negative is the game’s three-quarter view of the game fields, which can make judging the number of columns available to place blocks in unnecessarily hard to discern. It’s simply an odd choice: it doesn’t add anything to the game’s aesthetic and serves only to obfuscate the gameplay. It isn’t an omnipresent issue—but an avoidable one, nonetheless. Additionally, the game’s long load times certainly present an issue and the uninteresting loading screens do little to mask the downtime. Luckily, this was the only technical issue I encountered while playing and I found the controls to be tight and responsive. Crystal Crisis seems to be rather well optimized for the Nintendo Switch. Beyond the fundamentals, Crystal Crisis is packed with myriad modes to flex your puzzle skills in. For single-player, these modes draw from traditional fighting game modes such as arcade ladders, endless fight-until-you-die gauntlets and head-to-head  matches. The game also features a more standard Inline mode, in which crystals break autonomously when three are matched, but this mode feels decidedly less interesting than the typical gameplay formula. These options spoke loudly to me as someone who plays puzzle games purely from the single-player perspective as my stint with Tetris 99 put grey hairs on my eighteen-year-old head, there are plenty of multiplayer accommodations here as well. For those interested in taking the fight to their friends, Crystal Crisis features full suites of features for both local and online multiplayer, which is much appreciated, however, fairly expected in a package like this. 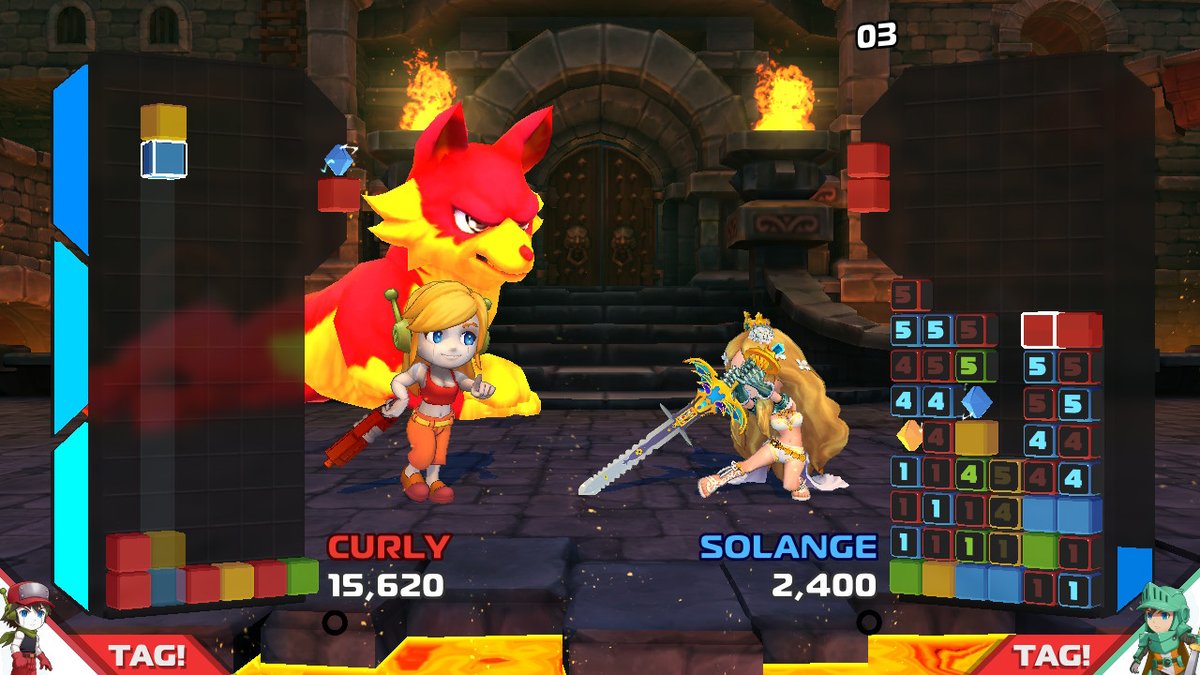 Beyond checking the traditional boxes, Crystal Crisis features two modes which go above and beyond what is classically expected in a puzzle-fighter: Archive and Story Mode. The former is a fantastic collection of high-quality concept art scans for various Nicalis projects which is a treat for fans of these respective titles. Equally heavy in fan service is the Story Mode featured in Crystal Crisis which crosses over Nicalis worlds in a ten-chapter saga as various interested parties race each other to reach the game’s titular crystal. In a word, the story is uninteresting, and the dialog isn’t much better. Perhaps if I were a bigger fan of the Nicalis IP I’d find the narrative more engaging, but as a relative outsider I was underwhelmed by the mode’s presentation. However, the mode’s actual structure is far more enticing. While each chapter is only a single, best-of-three fight, many of the levels allow you to choose which fighter to control. Based on who you choose in each chapter, the story will fork and lead into new scenarios. These branching paths don’t do much to change the overall flow of the narrative but considering that the story mode can be beaten in about an hour, it is undeniably interesting to take a few passes at the mode and see how things shake out. That said, considering that the overarching storyline is fairly blasé and the gameplay itself is fundamentally no different than arcade mode—I found myself opting to play the latter mode instead, as it is a far more distilled version of the Crystal Crisis experience. As such, I found the story mode to be a redundant curio; something that I dropped not long after picking it up.

Even with Crystal Crisis’ occasional missteps, Nicalis has crafted a wholly enjoyable and robust puzzle-fighter. At only $40, there is an undeniable value here backed up by excellent gameplay concepts. While the roster feels unbalanced and story mode feels redundant, the core experience and myriad modes make up for these pitfalls and then some. Having largely finished my stint with Tetris 99 and Puyo Puyo Champions, it seems that I’ve found my new standby puzzler in Crystal Crisis.

Nicalis’ marriage of puzzle and fighting game elements in the fan service-heavy Crystal Crisis coalesces in a largely satisfying experience. While the roster can feel unbalanced, loading times can be long and the story mode feels trite, the overarching, nuanced gameplay will keep players strategizing and returning to Crystal Crisis time and time again.

Abram is an aspiring games journalist with a soft-spot for titles published by a particular company that starts with N, and ends with -intendo. When he's not playing, or writing about, video games, Abram is most likely ranting to no one in particular about various films he's seen, or grabbing the sketchpad to do a bit of drawing.
Related Articles: Crystal Crisis
Share
Tweet
Share
Submit