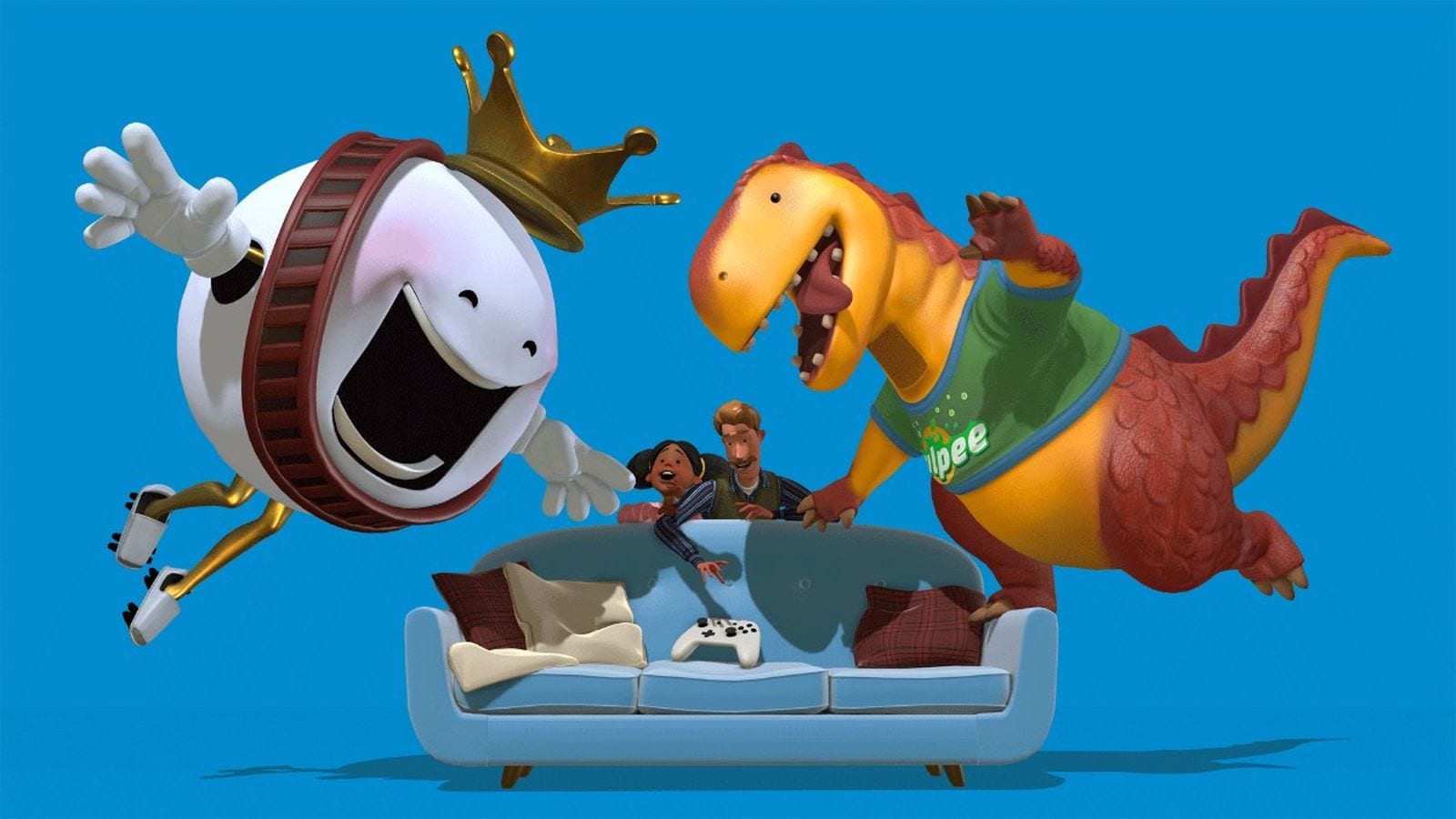 If you are a long time reader, you know I absolutely LOVE Planet Coaster, as you can plainly see in my review for the game on PC. Pouring literally hundreds of hours into the main game and its various content packs, it represents one of the most played games in my entire Steam library. Well…thanks to the power of vastly more powerful hardware present in the PlayStation 5 and Xbox Series X, I hereby welcome you to my personal addiction — scan your ticket and step through the turnstile as we check out Planet Coaster Console Edition.

The game opens with a brand new tutorial that will introduce you to a few new friends, as well as how the game operates on consoles. Walking you through basic ride placement and management, financials, guest happiness, and more, the tutorial shows you how to navigate the simple things like placing rides, shops, and coasters, all the way through the complex things like financial management and balancing your staff to handle mundane tasks like trash pickup and maintenance. You can see it for yourself in shiny 4K right here:

The controls in Planet Coaster Console Edition are the result of a lot of hard work and refinement from Frontier Team, but it’s far from their first attempt at it. Having released Jurassic World on the Xbox One, PlayStation 4, and Switch, the team knew how to turn complex controls normally built for a mouse and keyboard and translate them to radial menus and combination button presses. If you are already backing away slowly, rest assured — it’s far easier than it looks, and you have another option — a mouse and keyboard.

Connecting up a mouse and keyboard to my Xbox Series X felt a little sacrilegious, but once I put my fingers on WASD I was home. Keyboard combinations with mouse movements make placing objects easier than anything you can do with a controller. While the controller works, I highly recommend at least trying it with the mouse and keyboard. Sure, leaning back on your couch and designing a coaster with just a controller in hand is relaxing, but for serious park management, it’s nice to have the option.

If you are sticking with the controller, a brand new radial menu is how you’ll tackle your most frequent advanced moves, but it’s the contextual changes that do most of the heavy lifting. As you select things, buttons can change based on what you’ve selected. This system has been heavily tested, clearly, as it works in a very natural way. If you do get lost in the nuance, though, the controls are always displayed on the screen.

Beyond the controls, there are a few tiny improvements over the PC version of the game. The expanded tutorial that I captured above does a far better job at helping new players understand more than the surface of dropping coasters into a park and calling it a day. As I’m playing on the Xbox Series X, the load times are downright zippy, as is the framerate, running at 4K resolution with ease. We’ll touch on this again when we talk about the much-discussed Oswald-Eugene Counter, so hold your questions just a moment.

Planet Coaster Console Edition comes with two packs — “Magnificent Rides Collection” and “Classic Rides Collection” to add more content to your parks. Each brings with them nine additional rides and coasters and a bunch of theming to go along with them. While you won’t have access to some of the amazing movie tie-in expansions like Knight Rider, Back to the Future, and The Munsters, you will have access to classics like the Zipper, Teacup rides, and a few flat rides the likes of which I’ve never seen. The game does have the ability to pull in new DLC, so I’m sure we’ll see future packs, but let’s talk about the way you’ll likely get your most magnificent creations — the Workshop.

If you are unfamiliar with the Workshop from the PC version, it currently contains over a quarter of a million player-created objects. Building up a massive library of created content happened extraordinarily quickly, allowing players to pull down recognizable things like the Clock Tower from Back to the Future, the Eiffel Tower, and even a replica of the White House. It’s absolutely insane the things people can create with unlimited time and a little skill, and you’ll be able to access all of that creativity via the Workshop. Just as you can on the PC, you can select either a portion or all of a creation and upload it, including your entire park if you so choose (and yes — there are fan-made replicas of Disneyland, Disneyworld, Universal Studios, and more). While the Console Edition is a different workshop than the PC version, this Workshop is also cross-generational (but not cross-compatible), allowing you to share parks between the same family of consoles. Be mindful of the amount of objects, however, as you may overload the older versions of the Xbox One and PS4. Let’s get into the Oswald-Eugene Counter.

The Oswald-Eugene Counter is a clever way to keep you from overwhelming your selected console by restricting the number of objects you can place in the environment. This is summed up by a percentage known as the Oswald-Eugene Counter. Each object you place, be it a path, ride, coaster, food shop, or trash can takes up a certain amount of memory space. Put simply, the PS4 and Xbox One have just 8GB of it, whereas the PS5 and Xbox Series X have 16GB, so it stands to reason that they can handle more. How much more? Well, each object is actually made up of a number of smaller objects (think of building a shop — four walls, a floor, the roof, plus the insides, decorations, etc.) so it varies quite a bit. I decided to put it to the test on the Xbox Series X. First I tried to break it using coasters placed in the most insane way possible:

Ok, so that’s more coasters than any same person would place, using more sky-high supports than is reasonable. I put in essentially every coaster and it still maintained a stable framerate. You requested that we do the same thing, but with objects, so I did that. I don’t know how many objects are in the final scene, but at the end I was placing them 5000 at a time, so I’d have to guess around 100,000 objects, but it’d just be a guess — I’ll let you decide for yourself:

While I’ve not taken the time to rebuild my epic parks from the PC version into this version, it’s pretty clear to me that it’s unlikely that I’ll run afoul of the Oswald-Eugene Counter in doing so. Sure, there are the “Silverette” types in the world who will build unbelievable creations beyond the capacity of mere mortals, but the average joe probably won’t see the upper bounds any time soon. All of that said, I feel like players should be able to toggle a button that turns off the Oswald-Eugene counter with a warning in bright red flashing letters saying 1.) you cannot upload anything without OE control to the Workshop, and 2.) you can and likely will crash the game or your machine, putting your save file at risk, allowing players who insist on breaking the rules the freedom to do so. Who knows what future patches will bring.

All of this said, it is possible to overwhelm the Xbox Series X. When you put 100,000 objects on the screen, you are bound to see a few framerate hitches as they are all lovingly displayed in 4K. On the PC you can simply drop back to 1440p or 1080p and wring a few more frames out, but here things will just struggle a bit. Thankfully, after days with the game I saw this very infrequently, and only when I purposely overloaded it — it seems like normal play won’t trigger this behavior very often, if ever.

There is one limitation of the console version of Planet Coaster that I don’t see being overcome — imports. On the PC version you can easily bring in your own music and images, allowing for some very creative implementations of themed rides. Unfortunately, that’s less easy on consoles as you don’t exactly have access to “folders”. This is hardly a deal breaker, and hardly unexpected, but something you should know if you are coming over from PC.

One of my favorite additions to this version of Planet Coaster are a handful of new characters to guide your builds. Oswald B. Thompson is the colorful narrator you hear in the opening tutorial who’s only motivations seem to be making guests happy. Cynthia Clark is my spirit animal, adeptly wringing every dollar out of the park guests at every turn. Eugene Newton is the park resident engineer, always on the lookout for opportunities to make the park run more efficiently, whereas Lucy Summers is your 900-strong social media maven who can help you understand what it takes to make people more interested in your rides. These colorful characters match the bright tone of the game perfectly, and more than once made me smile as I extracted precious dollars from my attendees.

Planet Coaster Console Edition is sure to give players a metric ton of fun as everything is here. Every scenario and sub-scenario (e.g. Pirate Battle, Creature Awakens, and Pirate Cove make up Captain Lockjaw’s Buried Treasures, seen above) from the PC version is present, and that’s going to keep you busy for a very long time. If making your own parks from scratch is your jam, then the sandbox is for you. Challenge mode is also here to give you more difficult scenarios such as reviving a failed park, or dealing with rides that break down abnormally fast. I’ve put in an insane amount of relaxing hours helming my own parks, and now I can do it from the comfort of my couch. At a time when we all collectively sigh and wish we could visit real-world theme parks and ride real-world coaster, Planet Coaster Console Edition lets us enjoy the fun…albeit at a smaller scale.

With a practiced expertise, Frontier has translated their fantastic coaster creator to the next-gen consoles without compromising the core qualities of what makes this game great. The radial menu and optional keyboard/mouse controls delivers theme park magic unlike any other, and once again claims its crown -- the king of coasters among mere tycoons.

Ron Burke is the Editor in Chief for Gaming Trend. Currently living in Fort Worth, Texas, Ron is an old-school gamer who enjoys CRPGs, action/adventure, platformers, music games, and has recently gotten into tabletop gaming. Ron is also a fourth degree black belt, with a Master's rank in Matsumura Seito Shōrin-ryū, Moo Duk Kwan Tang Soo Do, Universal Tang Soo Do Alliance, and International Tang Soo Do Federation. He also holds ranks in several other styles in his search to be a well-rounded fighter. Ron has been married to Gaming Trend Editor, Laura Burke, for 21 years. They have three dogs - Pazuzu (Irish Terrier), Atë, and Calliope (both Australian Kelpie/Pit Bull mixes).
Related Articles: Let's Play, Planet Coaster: Console Edition
Share
Tweet
Share
Submit