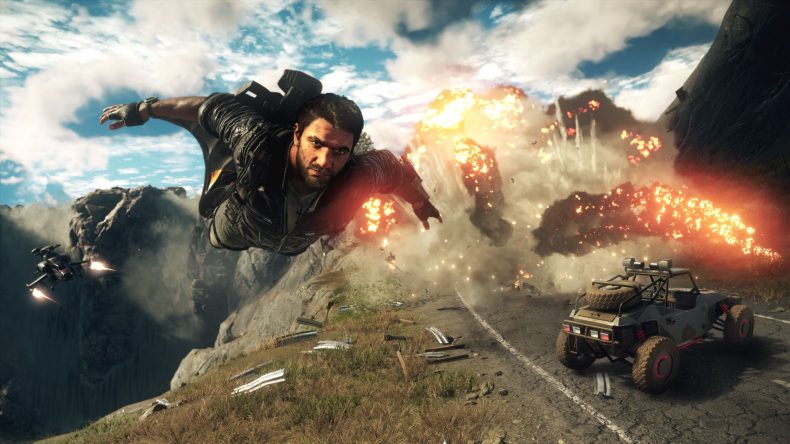 I’ve played every game in the Just Cause series, but never became a true believer until Just Cause 3, which gave me dozens of hours of enjoyment flying around and causing absolute mayhem. With Just Cause 4, my expectations were high and I couldn’t have been more excited to dawn the wingsuit and grapple hook once again. Thankfully, Just Cause 4 is even more fun than its predecessor, even if it doesn’t do too much to shake up the formula.

The secret sauce in Just Cause 4 is the game’s ability to make you feel like you’re cheating somehow at every point in the game. It feels unfair to your enemy when you fly 100 kilometers per hour over a hostile base, then grind to a halt a second later and rain down a sarcastic amount of explosives on enemies below. You feel like you just entered a cheat code when you lift an enormous oil tanker off the ground using two dozen hydrogen balloons, then ride on it, shooting the enemies below, before cutting the explosive behemoth free and watching it land on an army underneath, incinerating everything in an instant. Just Cause 4 captures all the best moments of using cheat codes to enter God mode in old GTA games — only better. If you aren’t having fun in Just Cause 4, then you just aren’t being creative enough. In a game that gives you limitless options to wreak havoc on the open-world, the possibilities are as endless as your imagination.

Every tool at Rico’s disposal can be fully and completely customized to work however you want. You can control how each gadget is activated, the level of intensity at which it operates, and nearly every other detail you can imagine can be adjusted as you unlock perk points that allow you to customize down to the finest detail. Want the hydrogen balloon gadget to be filled with explosive gas instead? Go for it. Want the tether tool to yank two items together at lightning fast speeds instead of a steady pull? That’s an option. The longer you play Just Cause 4, the more you come to appreciate just how much care Avalanche Studios has put into providing you with as much freedom as possible. In my time playing Just Cause 4, I did some truly despicable, goofy, and downright stupid things, each which caused me to erupt in laughter and disbelief that I was allowed to do so — and that’s the thing that made it so hard to put the controller down every time I booted the game up.

The story in Just Cause 4 is more intricate and personal than the “kill this dictator” stories of the past, though it follows a similar path. The narrative brings Rico to Solís, a tropical island with ancient temples and fantastic technology, which is controlled by Rico’s longtime nemesis, “The Black Hand.” The Black Hand has been building powerful and miraculous weather-controlling tech, which can do things like summon a tornado, or generate a thunderstorm that goes on indefinitely. Mostly, the weather tech gives the game an excuse to throw massive tornadoes around the island, which Rico must contend with, and provide things like the “tornado gun,” which literally lets Rico shoot tornadoes at people. In the center of it all, though, is a story about Rico’s father, whom Rico has been estranged from for many years for unknown reasons. The story is better and more personal than previous Just Cause games, but definitely not the main draw here, and only barely interesting enough to keep the player engaged.

Instead, most of your focus throughout Just Cause 4 will be centered around retaking Solís and eventually overthrowing its dictator. One of the major improvements over Just Cause 3 in this regard is that, instead of running around destroying every fuel tank and power plant on the island in a repetitive gameplay loop, each district of the island has a specific mission associated with it that allows you to advance your army into that area once the mission is completed. While this gets rid of some of the grindiness of Just Cause 3, it is also a little disappointing to reclaim a region with the push of a button. I would have liked there to have been a final battle that takes place in order to officially claim an area. It is also a bit disappointing that The Black Hand never tries to retake an area from you after you’ve claimed it.

Claiming new regions is essential, as you’re rewarded with new airdrop options, which allow you to call down any item in the game from the sky. Whether you’re looking for a fighter jet, motorcycle, or rocket launcher, you can access it in seconds with the proper airdrop option unlocked, which means you’ll never run out of ammo or be missing that perfect tool you need to pull of a ridiculous task. And, if you’re in a pinch, you can even call an airdrop as a means of defeating an enemy. For example, I found myself without weapons and riding a dirigible, so I ordered a large vehicle to be dropped onto the balloon as a means of destroying it. When the large crate landed on the balloon, it punctured a hole in it and causing it to plummet to the ground. Then I simply got into the vehicle and drove off the dirigible seconds before it exploded. This kind of instant gratification is addictive and invaluable in a game where feeling like you can do anything at a moment’s notice is so important.

The biggest issue with Just Cause 4, is that it doesn’t add a ton of new things to the franchise. While the new gadgets and level of customization offered with them is without a doubt a huge leap in the right direction, it’s one of the only ways that the game improves over its predecessor. Flying around in a wingsuit, destroying red objects, and overthrowing a dictator all feels extremely familiar from what we’ve seen before from the franchise. The weather events are awesome and hilarious, but don’t happen enough to be the signature addition to the franchise that separates it from Just Cause 3. If you’re like me and you adored Just Cause 3, then maybe this isn’t a bad thing, but it’s clear that the franchise needs more dynamic changes to the formula, rather than the incremental improvement that Just Cause 4 feels like.

In terms of presentation, Just Cause 4 is a step up from Just Cause 3, sporting fantastic tropical views and jaw-dropping draw distances. More importantly, playing on the Xbox One X meant much, much faster load times than the previous Just Cause game, which was one of my major gripes. In terms of sound, Just Cause 4 is all explosions and fast-paced music, with the occasional solid voice acting thrown in. It’s nothing spectacular, but it serves well enough for the purposes of absolute chaos that Just Cause 4 offers.

Just Cause 4 is another solid entry in a franchise that continues to bring me hours of over-the-top, hilarious action. It doesn’t do enough to evolve the franchise, and doesn’t make enough use of the new weather effects, but the new tools available to Rico and the improvements in customization options is well-worth the price of entry.

You know that jerk online that relentlessly trash talks you after every kill? That guy was probably Travis "Tie Guy" Northup. Competitive, snarky, and constantly wearing a tie, Travis has been writing his opinions about electronic media since he was a teenager, and is pretty much the only person to hold his opinions in high regard.
Related Articles: Just Cause 4
Share
Tweet
Share
Submit