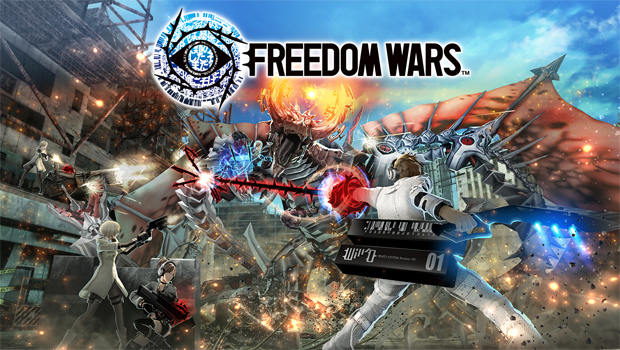 Developed by SCE Japan Studio and just now coming West after a successful launch in Asia, Freedom Wars has all the markings of a hit PS Vita exclusive title. It was designed by the same team behind God Eater Burst and God Eater 2, and the musical score was composed by LocoRoco veteran, Kemmei Adachi – not to mention it sold nearly 200,000 copies during its first week in Japan. As the first impressive screenshots and early release trailers began trickling over, there were many who dared to hope that this would finally be the must-have game that Vita players have been waiting for. What could possibly go wrong, right? Sigh.

The premise of Freedom Wars is what really surprised me when I first picked it up. Being accustomed to uninspired storylines in similar action-hunting titles such as Toukiden and God Eater Burst, I was immediately caught off guard when I realized I was actually playing an action-hunter RPG with an original concept behind it. The opening cinema sets the stage by showing your character losing a fierce battle against a giant robot, resulting in a complete loss of memory. As if that wasn’t bad enough, because your combat training is considered a valuable government resource, you’re immediately arrested and slapped with a million-year-long prison sentence for forgetting it all. The only way to reduce your staggering sentence and win back your freedom is to participate in increasingly dangerous missions against the many enemies of the state. Pretty awesome setup, huh? I admit that I was hooked from the start.

The presentation and setting are also exceptionally good. Graphically, it’s an impressive looking game, with smooth textures and flashy explosions during the fast-paced battles. There were some noticeable slowdowns at times, but for the most part it ran at a consistently smooth 30 fps. I also like the musical score, which helps lend a dark, upbeat and overall cinematic quality to the dystopian environment. It’s clear that a lot of thought went into creating the aesthetics of this unique and oppressive cyberpunk world. But as much as I enjoyed the initial setup and the prison state environments, I had a hard time maintaining interest in the proceedings of the lackluster narrative.

With the possible exception of Soul Sacrifice, action-hunter games are notoriously skimpy when it comes to their stories. The idea of having something more engaging to fight for than the usual “defend a town from giant monsters” scenario immediately had me sitting up in my seat. But sadly, after the initial introductions of the concept and setting, Freedom Wars largely fails to realize its own potential. In a lot of ways, it feels like a TV show that has a really awesome pilot episode followed by a long tapering of filler episodes that eventually lead to a sputtering letdown of a season finale. It sounds harsh, but that’s how I felt as I plowed through this game. I kept waiting for it to deliver something that never came.

Pushing the story aside, the main selling point for Freedom Wars is its combat system. The battles are a blast to play and it nearly tramples all my other gripes, but it’s not perfect, and the controls can be cumbersome at times. There are some irritating issues like not being able to control the camera while running and sometimes the lock on command is more trouble than it’s worth, but after spending some time wrangling with the options I was able to find a reasonable alternative to the default control settings.

Similar to most action-hunter games, Freedom Wars has you taking down oversized enemies (called Abductors) and collecting their body parts to build stronger equipment. There’s a lot of room (dare I say, freedom?) in each battle to choose how you want to engage the enemy, helping to maintain the excitement even when grinding. At any point during a fight, you can instantly switch between firearms and melee weapons, with the added choice of using items such as first aid kits and grenades. Your character also has a grappling device called a Thorn Whip, which basically shoots out like a spiked Spiderman’s web and can be used to yank down your enemies or pull you towards anything you hit with it. As you progress, you’ll be introduced to a variety of new weapons and upgrades that can be used to expand your arsenal and open up new play style options.

One problem with the fast-paced combat is that it makes the rest of the game feel like you’re slowly slogging through a swamp. The breakdown of the story is mostly delivered through lengthy dialogue segments that occasionally prompt you to hit the X button to initiate a pre-selected response. Oftentimes you’ll be asked to travel across the map to find a person to talk to and then told to travel across the map once again to talk to someone else. These types of fetch quests certainly aren’t uncommon amongst RPG’s, they just feel particularly long-winded and pointless in the grand scheme of Freedom Wars, and you may find yourself growing impatient waiting for the next battle.

Of course, if you do ever grow overly tired of conversing with in-game characters, Freedom Wars has a nicely implemented online function that allows you to join or battle other human players at most any given time. It can be refreshing to play with a real group of people rather than relying on NPC’s, and I imagine the fun would only be multiplied if shared with your friends. Playing online is also the easiest way to pickup advanced weapons and knock years off your sentence (I got roughly 800 years per round), so there are plenty of advantages to creating or joining a room.

It’s easy to review a game that you love playing, and it’s even easier to review a game that you hate to play, but games that fall in the middle ground are the true challenge. I know this is completely weird but bear with me, Freedom Wars reminds me of the first time I tried Sour Patch Kids gum. I was super excited about the idea of a gum that tasted like one of my all-time favorite candies, but as soon as I started chewing, I quickly realized it was nothing more than a sugar-free block that faintly tasted like bathroom cleaner. It was still gum, but it was also a real letdown. Freedom Wars is definitely not the worst game I’ve ever played on the Vita; it isn’t even the worst monster-hunter-esque game I’ve come across. But it just feels like it could have been so much more. At the end of the day, Freedom Wars is an awesome idea that’s cool to look at with some really fun parts to play, but it doesn’t take you where it promises and doesn’t even finish what it started.

Freedom Wars delivers an action RPG in an accessible, pickup-and-play, portable package. The combat system is fast-paced and fun with a variety of play styles, and the online functionality is well implemented. With the exception of some frame-rate and camera control issues, the main problem is its failure to deliver a compelling narrative following the initial setup. Recommended for action-hunter fans who don’t mind slogging through a bland story.

Stefan started gaming the day his dad brought home a shiny, brand new commodore 64. He's been hooked ever since. Whether he's leveling up his ninja in Final Fantasy Tactics, cruising the streets of San Andreas or working on his Terran build order, videogames are never far from his mind. He is currently on the lookout for an appropriate 12 step program to address his electronic addiction.
Related Articles: Freedom Wars
Share
Tweet
Share
Submit