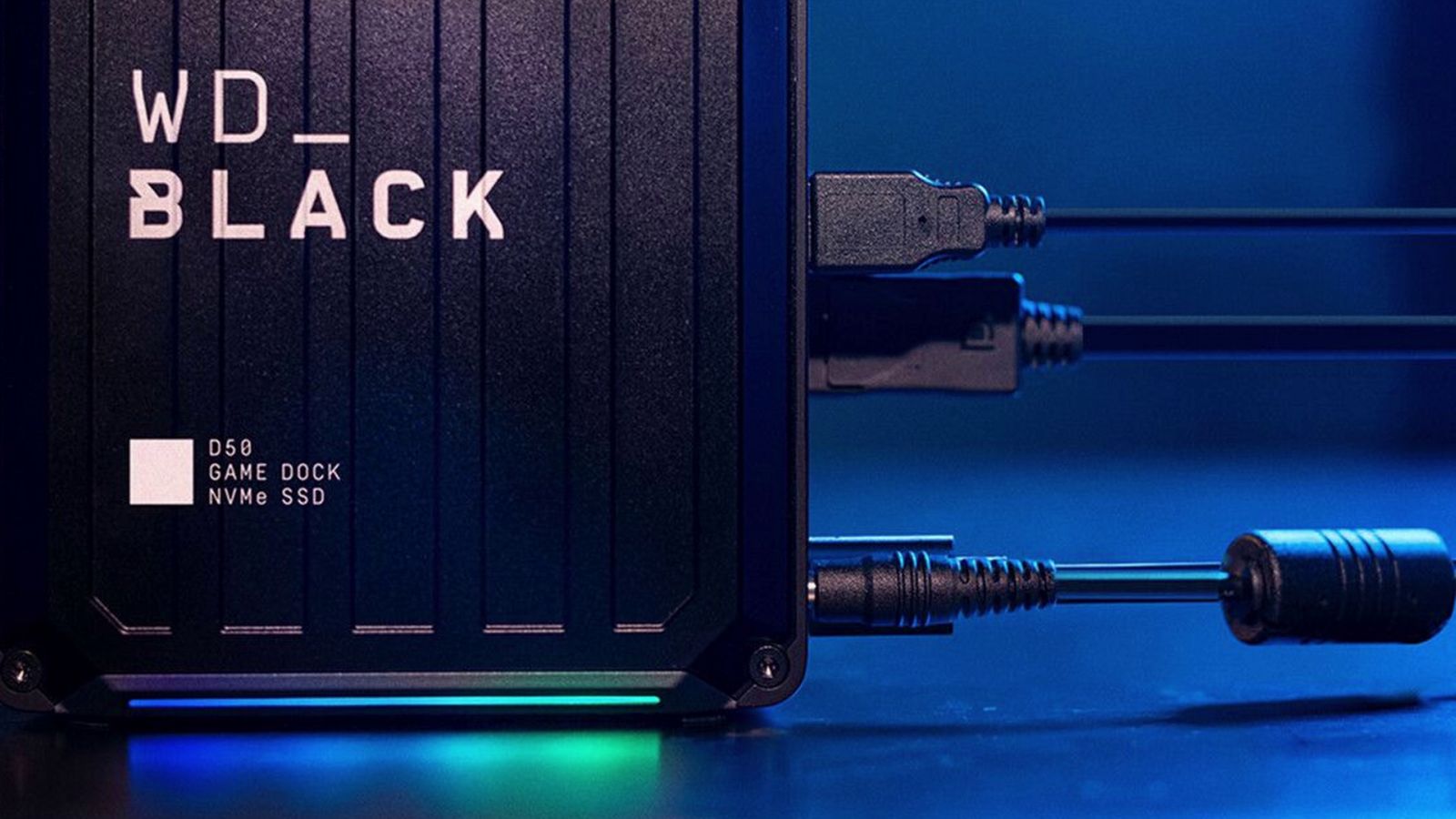 If you are like most people, you are probably working from home right now. Work time and home time has blurred, and all of us are putting in a lot more time in front of our screens. If you’ve got a limited amount of space, or don’t want to drop cash on two entire setups just so you can have dual monitors, mouse, keyboard, and sound, you’ll want to pick up a dock. As we all settle in for who knows how long of being stuck inside, it’s time to consolidate the space, get efficient, and find ways to make a hard and seamless break between work time and play time. Enter the Western Digital Black D50 Game Dock. Let’s unbox this thing and see what’s going on.

As you can see from the video above, the D50 is a svelte dock compared to nearly any other dock on the market, measuring just 4.7” x 4.7” x 2.1” and weighing just over a pound. Despite the compact size, it has an impressive array of ports, rivaling docks three times its size.

The objective of any dock is to allow you to quickly connect your laptop up to many peripherals with as few cables as possible. Hooking up a keyboard, mouse, speakers, headset, webcam, and multiple monitors, and then bringing everything to life with a single Thunderbolt cable makes switching from work time to game time a breeze. But what all can you connect to this dock at the same time? That answer lies with the ports. 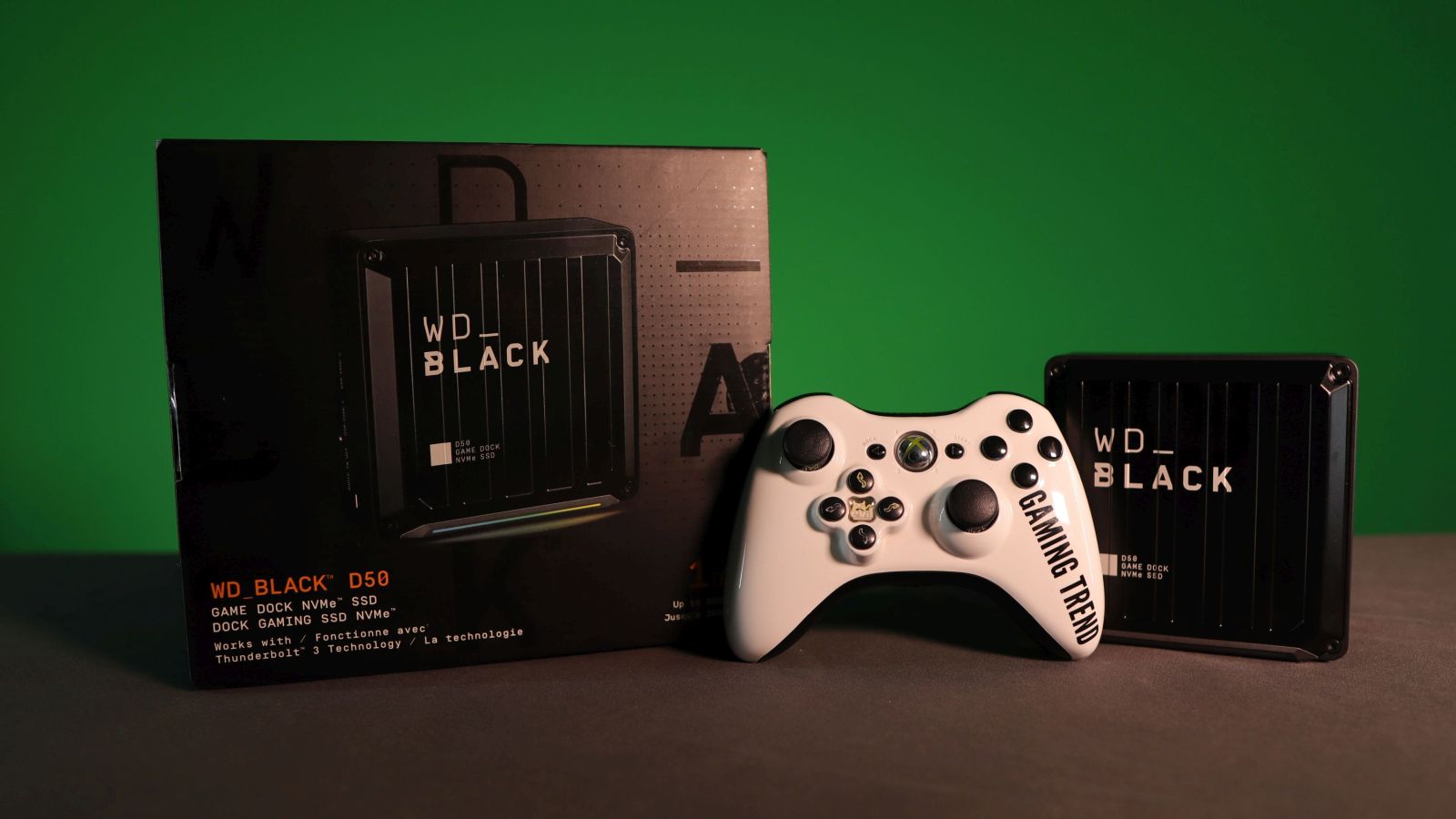 The WD_Black D50 Game Dock has a total of 10 ports on it. On the front of the device lies one USB Type C Thunderbolt 3 port, a USB-A 10Gb/s port, and a 3.5mm audio/microphone port. Heading around the back, we have a Gigabit Ethernet RJ-45 jack, one DisplayPort 1.4 port, the second USB Type C Thunderbolt 3 port, two additional USB-A ports for your mouse and keyboard (though 10Gb/s is so overkill for such peripherals), as well as a Type-C port for a second monitor, and the final Type-C port to connect to the laptop. That last port has an additional trick up its sleeve that elevates the D50 game dock above its predecessors.

The power plug that gives juice to the D50 also passes a full 87 Watts through the USB-C port to your laptop. This means it is capable of charging your device. Just about any Macbook on the market is built to operate and charge on just 87W of power, and the three Thunderbolt 3-enabled devices in my household, as well as a Surface 3 were all able to do the same. This means you can truly bring your devices and your laptop to life with a single cable, making it extraordinarily convenient to unplug and go.

As the monitor connector is Thunderbolt 3, it is capable of driving screens up to 5K resolution at 60Hz. More likely you’ll be connecting more standard fare monitors to the device. The small real estate does mean only a single DisplayPort adapter, but a $15 adapter on Amazon will happily connect a second DisplayPort adapter. 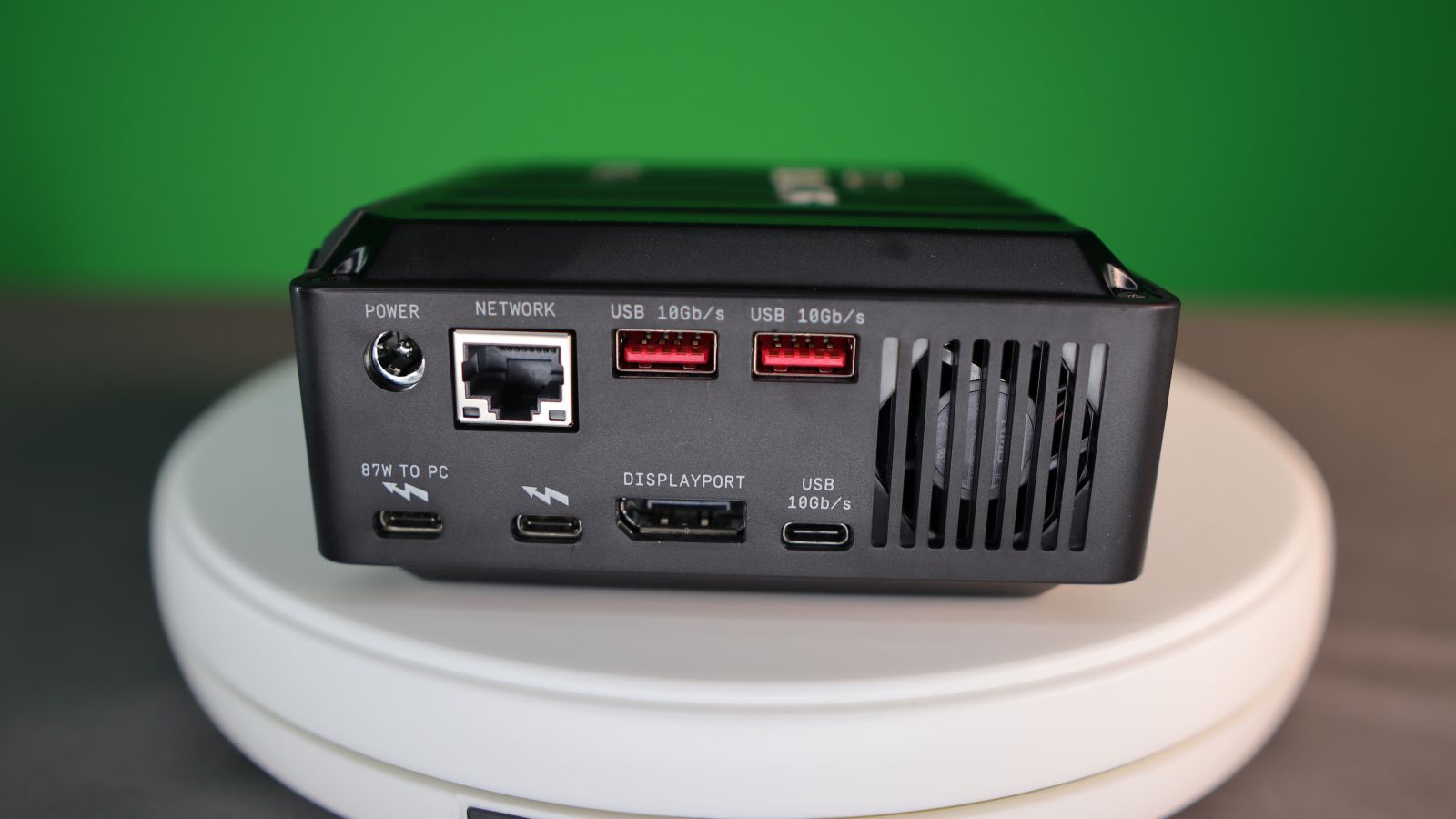 Dipping under the hood, there is a nice surprise that may be a solution to a common problem with devices like the Razer Blade Pro (2020 Edition) (our review). That version came with a 1TB M.2 SSD with no option to bump up capacity at purchase. Obviously you can always plug in a USB-powered HDD, but if you want to match the same power you’ll need something in the m.2 family as well. The D50 offers precisely that. This dock comes in three price points — one without an m.2 drive (they are easy to install if you have your own) for $306 at the time of writing, $439 with a 1TB, and $679 for a 2TB model. All of these models come with 3000 MB/s read speeds, and 2500 MB/s write speeds, matching what is already present in nearly any gaming laptop on the market today.

I personally have been using the dock another way that is gaming-adjacent. All of our video content requires editing to add music, title cards, transitions, green screen work, and other bells and whistles to bring it to life. I use this dock to create a high speed workspace for my chosen editor, DaVinci Resolve Studio. When I’m rendering, I do so on the dock directly. The 10 gigs of high-speed throughput offered by Thunderbolt 3 is more than sufficient to render the footage without a hitch. In real-world testing I saw the drive easily hit that 3000 MB/s read and 2500 MB/s write mark, but that’s hardly a surprise from a company that has been making storage devices since the 1970s.

Naturally, there is a way to make the device at least 10% faster, and that’s the LED strip that adorns the side of the case. Able to bring millions of colors to your workspace, and fully integrated with Asus Aura Sync, Razer Chroma, Gigabyte RGB 2.0, and Mystic Light from MSI, you can customize the dock to look its very best. Ok, sure, it won’t actually improve the speed any, but at least it’ll match the rest of your gear. 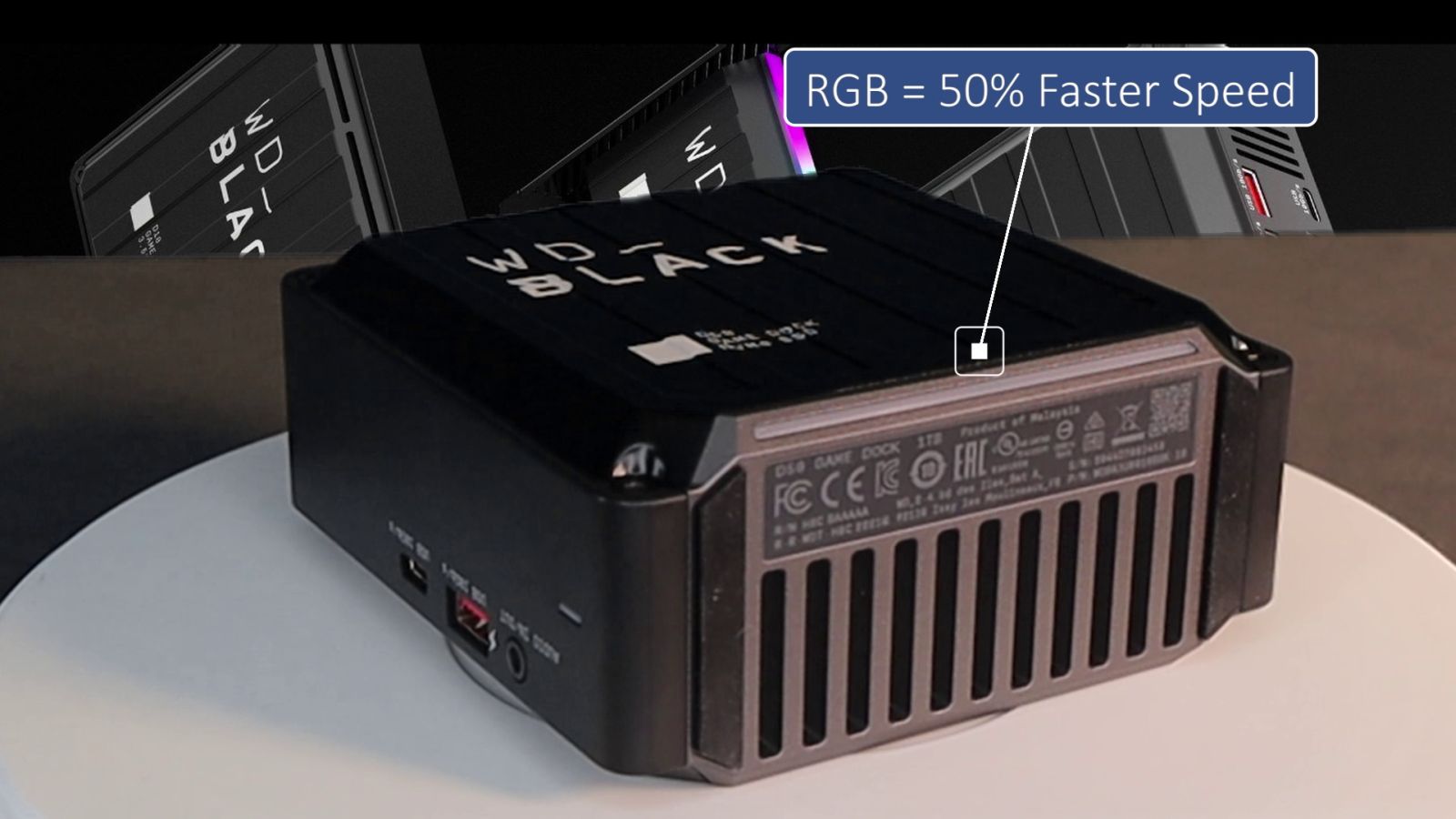 While it is in no way required, Western Digital also has a software suite called WD_Black Dashboard. This allows you to monitor the overall health of the drive, as well as the temperature, if the dock is utilizing all four PCIe lanes for speed, a graph of read and write speeds, firmware management, and much more. There’s also a “Gaming Mode”, though I was not able to see any difference in overall speed. This dashboard is free and doesn’t eat up much in terms of resources, so it’s good to run every once in a while to check for overall operating health. 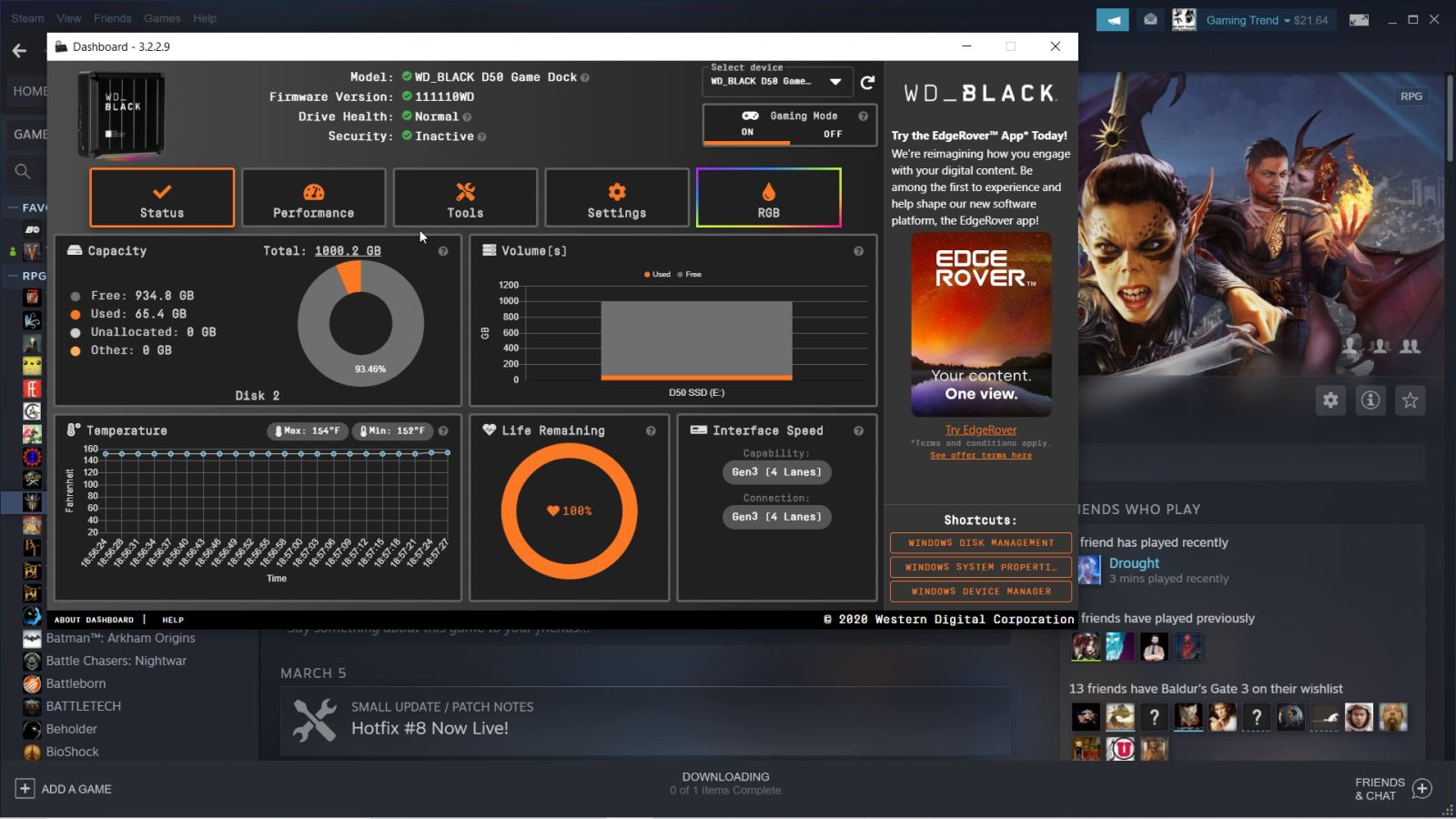 One of my biggest pet peeves with drive manufacturers is a staggering lack of faith and support of their own products. Western Digital is standing behind the D50 all the way, offering a full 5-year warranty on this dock. This tells me that they believe in it, but they also want you to know that they are ready to support you should you need it. Having been stymied by 1-year warranties by their competitors in the past (or worse, 90 days!), this is a major win in my book.

I’m impressed with the WD_Black D50. It’s sleek and compact, delivers precisely the speeds it advertises, and does so while providing just as many port options as drives twice the size. While it is a little bit pricier, the included drive and 5 year warranty make it a great solution for keeping our workspace sane.

Ron Burke is the Editor in Chief for Gaming Trend. Currently living in Fort Worth, Texas, Ron is an old-school gamer who enjoys CRPGs, action/adventure, platformers, music games, and has recently gotten into tabletop gaming. Ron is also a fourth degree black belt, with a Master's rank in Matsumura Seito Shōrin-ryū, Moo Duk Kwan Tang Soo Do, Universal Tang Soo Do Alliance, and International Tang Soo Do Federation. He also holds ranks in several other styles in his search to be a well-rounded fighter. Ron has been married to Gaming Trend Editor, Laura Burke, for 21 years. They have three dogs - Pazuzu (Irish Terrier), Atë, and Calliope (both Australian Kelpie/Pit Bull mixes).
Related Articles: D50 Game Dock, Hardware
Share
Tweet
Share
Submit