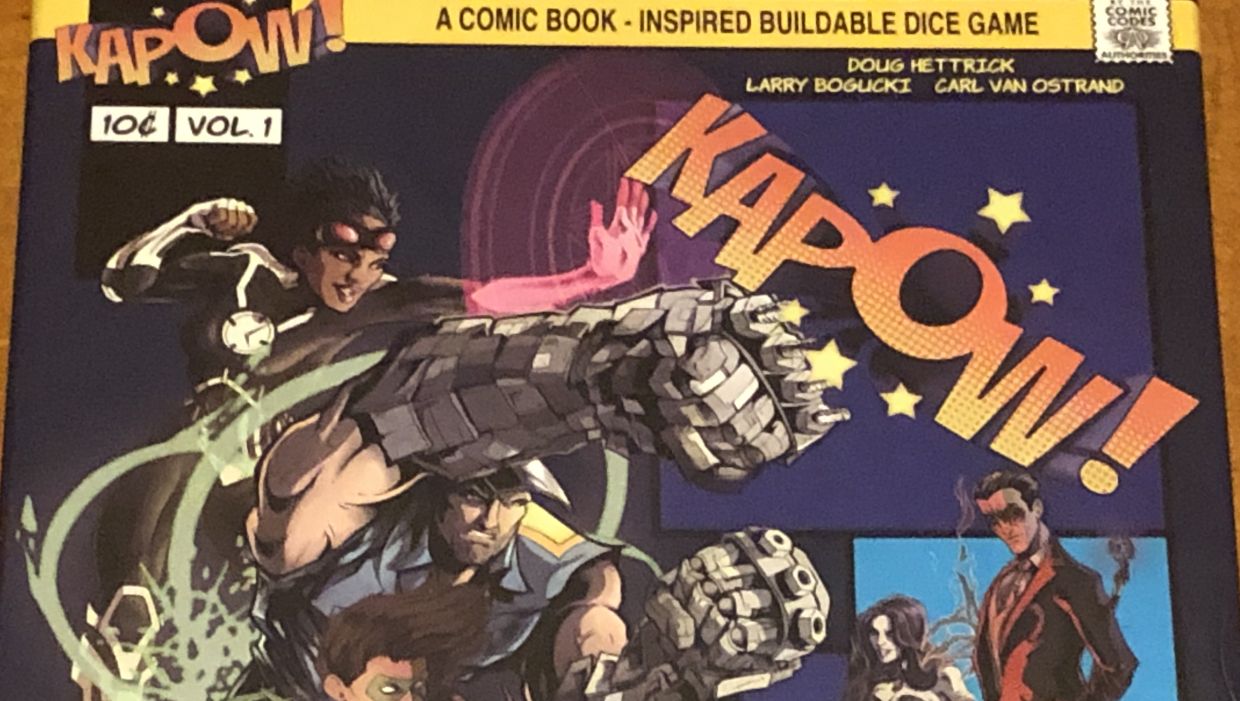 Comic book characters have no longer been relegated to dingy comic stores and bad made-for-TV movies. Since X-Men and the first Sam Raimi Spider-Man movies, comic book characters have entered mainstream pop culture. Since then we’ve seen more strategic games based on comic book characters come to the tabletop, from Marvel Heroes, Marvel Legendary and DC Deckbuilding Game, to Dicemasters and Heroclix. We’ve even seen the Sentinels of the Multiverse go from card game to roleplaying game. Now 2 Ton Porcupine has come out with a new dice game set in a new universe, the combat game Kapow.

Kapow has one villian go up against a hero player. Each player takes an action board, a player screen, a trait dice in every color, and a grey action dice with removable faces. The trait dice come in five colors with one face being wild, one face blank, and most of the other faces the attribute the same color as the die. A health tracker shows the damage they can take before losing the game. Each side starts with 20 health. 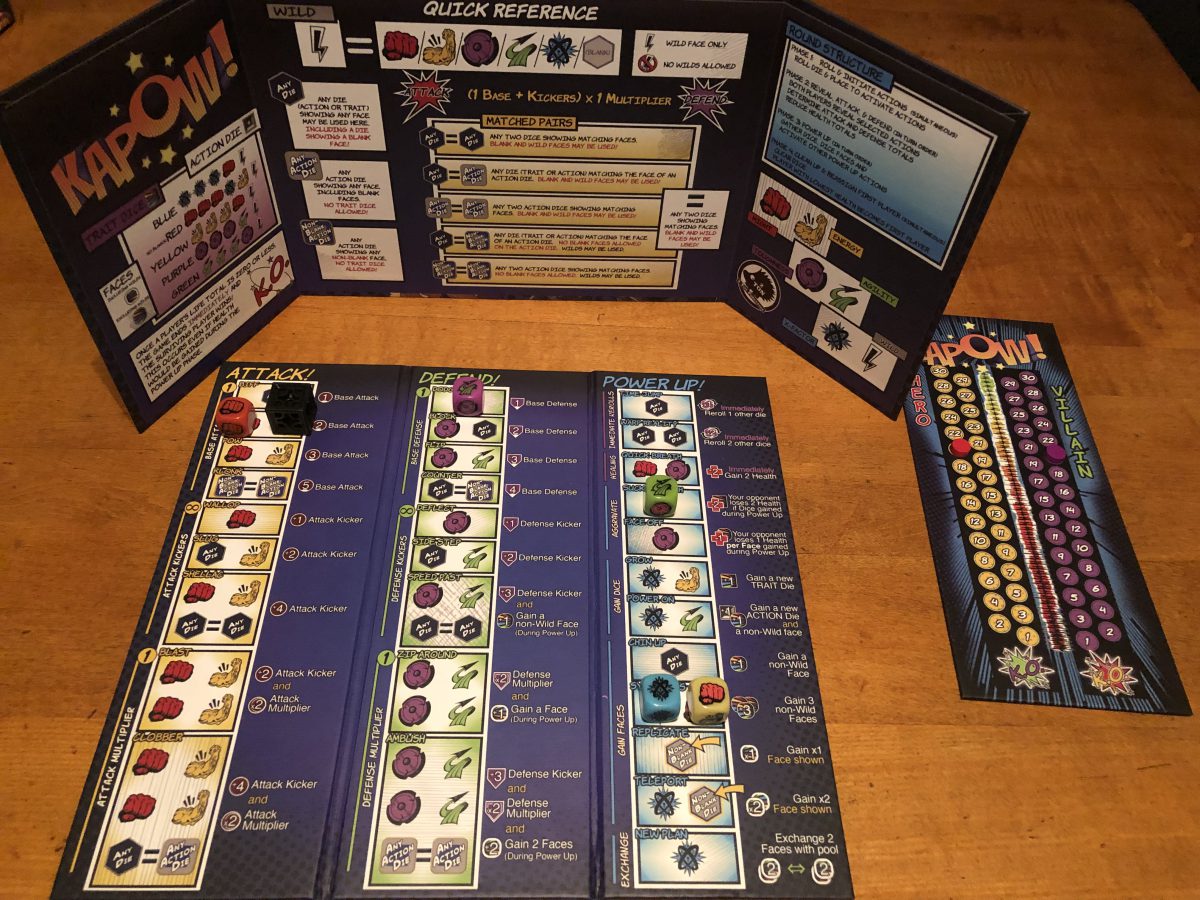 Each turn starts by rolling all of the dice in your dice pool behind the screen. Once the dice are rolled, they get placed on the action board. The action board is split up into thirds. The left third has areas for attacks, the middle third for defense, and the right third for power-ups. The special abilities include changing the face of one of your dice, gaining another grey action die, healing your character, or gaining a face for the action die. Some of these actions take effect immediately, while others take place after the attack and defense actions have been completed.

After placing the dice on the player board, each player reveals their board. First the attack and defense get resolved. Attack strength is the sum of the base attack and kickers multiplied by the multiplier. If either player’s health is depleted, then the game ends immediately. If both players still have health, then the non-immediate power-ups are taken. Once this has been completed the dice are cleaned up and the player with the least amount of health becomes the first player. 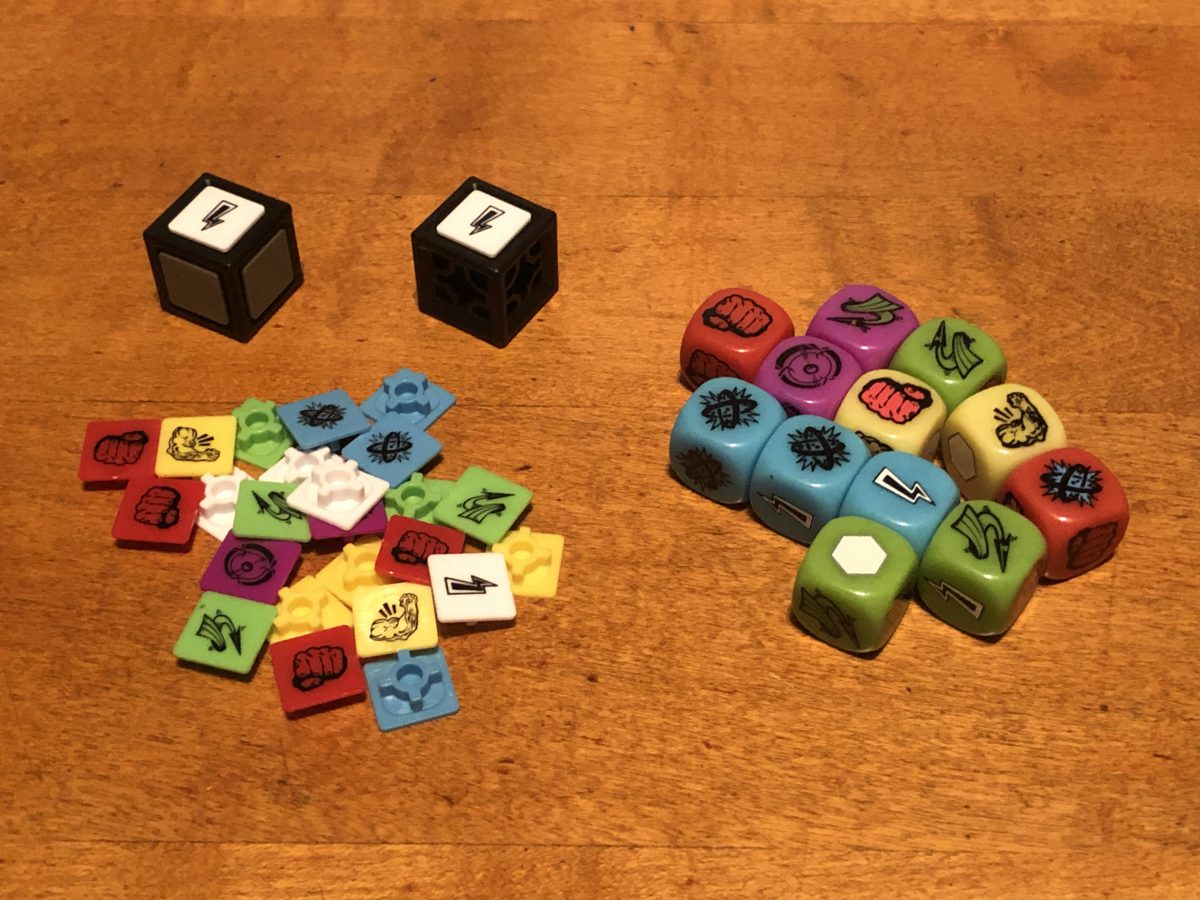 In the base game, both players are even with the same dice and abilities. Adding faces to the action die makes you feel like you are truly customizing your character. You also have a hard decision to make, whether you use your dice to build up some attack at the expense of defense, or do you defend hoping to attack next turn while gaining a power-up. Getting new dice gives you new options, but having no dice faces on them limits their usefulness.

Once you’ve gotten the hang of the base game, then you can add the characters. Three heroes and three villains come with the game. Using the special characters changes the number of hit points each player starts with, as well as the starting dice pool. New special powers are available in addition to the options on the player board. The characters take Kapow to the next level, and you’ll want to use them sooner rather than later because of how both sides feel the same in the base game. 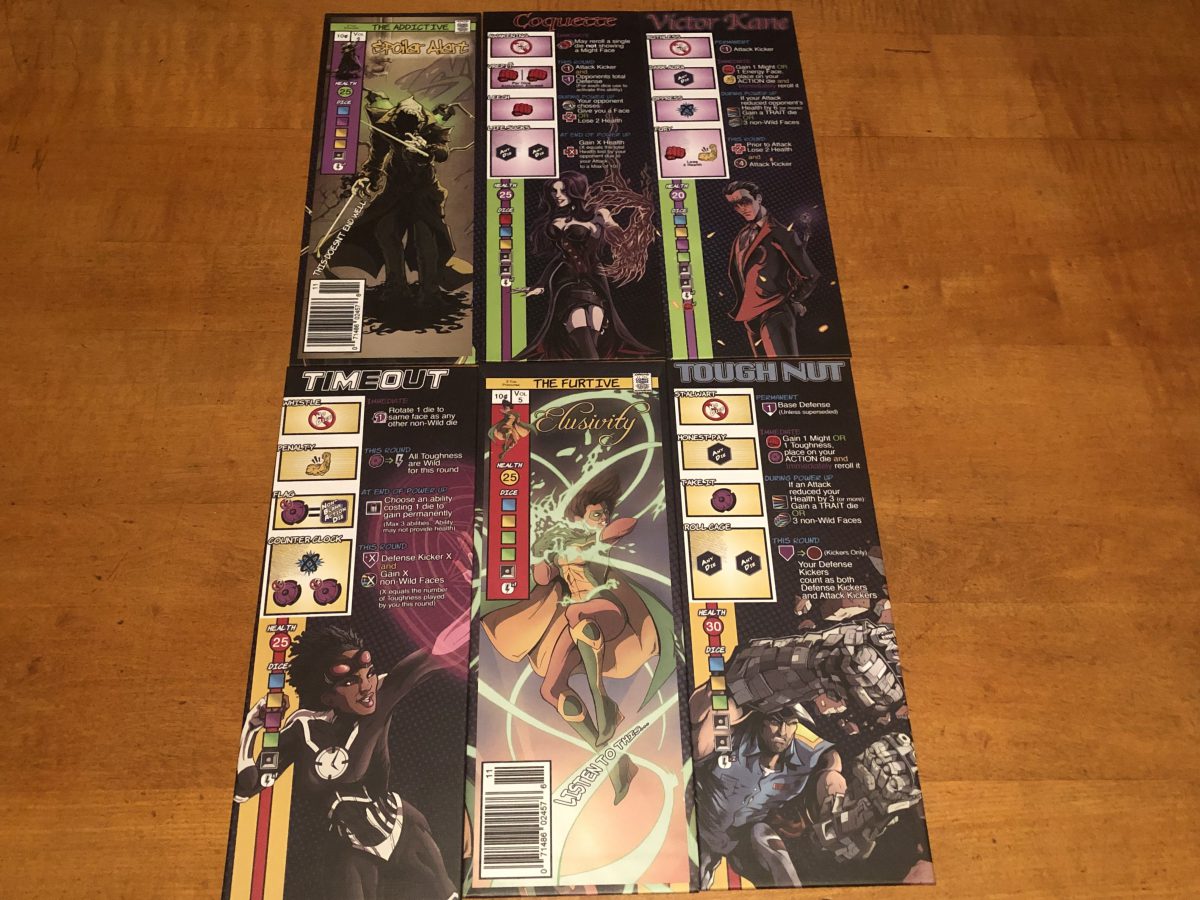 The player boards and screens are solid feeling. These components have weight to them and don’t feel like you are putting down a piece of paper. The action dice roll well with or without the blank sides on them. The colored dice do have a nice weight to them, but I am a bit concerned how long the symbols on them will last after several playthroughs. I also wish that more heroes and villains came in the base game. Three heroes and three villains are fine, but I would have liked more combinations to play. I also wish that they could have found a license holder to use. Kapow not only screams for comic book characters, but those from fighting games would work great as well.

Kapow is a game that does a lot right. The game plays well with two players, and it doesn’t take too long that it overstays its welcome. The base game is a great introduction before introducing the characters, and each roll offers interesting decisions on how to play the dice. I only fear that it may be difficult to find, and mainstream characters would have helped its appeal.

While not working as a Database Administrator, Keith Schleicher has been associated with Gaming Trend since 2003. While his love of video games started with the Telestar Alpha (a pong console with four different games), he trule started playing video games when he received the ill-fated TI-99/4A. While the Speech Synthesizer seemed to be the height of gaming, eventually a 286 AT computer running at 8/12 Hz and a CGA monitor would be his outlet for a while. Eventually he’d graduate to 386, 486, Pentium, and Athlon systems, building some of those systems while doing some hardware reviews and attending Comdex. With the release of the Dreamcast that started his conversion to the console world. Since then he has acquired an NES, SNES, PS2, PS3, PSP, GBA-SP, DS, Xbox, Xbox 360, Xbox One S, Gamecube, Wii, Switch, and Oculus Quest 2. While not playing video games he enjoys bowling, reading, playing board games, listening to music, and watching movies and TV. He originally hails from Wisconsin but is now living in Michigan with his wife and sons.
Related Articles: Kapow, Tabletop
Share
Tweet
Share
Submit