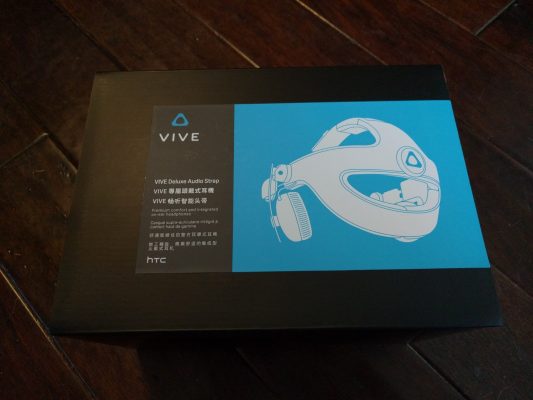 Thanks to a love of Star Trek, I’m the proud owner of a PlayStation VR headset, as well as the HTC Vive. As solitary as VR looks on the surface, it’s a highly social event in my house, and the velcro strap adjustments and forward-weighted Vive made longer sessions and switching between users somewhat cumbersome. While the Vive has far more software available to explore, I can’t deny that the PSVR headset is the more comfortable of the two. Or at least it was.

I’ve recently gotten my hands on the next iteration of the HTC’s design, and I have to say that it changes the design from something that was somewhat uncomfortable for longer sessions to a headset that supported more than 15 hours of play across a 48 hour period. Yeah…it’s that comfortable.

The most recent revision of the HTC Vive’s headset that ships in the box with the system is a cloth strap split into a skullcap of sorts with velcro strips on either sides of the temple to cinch the unit to your face. Smaller framed folks like our own Amy Kay Purcell have talked about how it doesn’t quite fit her head, causing it to slip at times. Most folks just find that the cloth strap system doesn’t pull the weight of the system onto the back of your head enough. More than once I’ve had a first-time user compare it to strapping a brick to your face. Hyperbole aside, I do have to admit I’ve had to adjust the stock head strap quite a bit during more hectic sessions. I was eager to see what the Deluxe Audio Strap could do.

The design is simple and effective.

Construction:
As the stock straps are fairly light, I was concerned when I opened the box and saw the size of the new headset. My fears abated when I lifted it free of the shipping container. At just 8oz, it weighs just slightly more than an iPhone 7. (For comparison, the old strap weighed in at 2oz) The inside of the headband is a soft removable foam material secured with Velcro strips and some small tabs to keep alignment. As you can see below, it makes the entire headset as padded as the face masks that ships with the system itself.

The shell of the system is a lightweight semi-flexible plastic construction with two adjustable headphones and a pigtailed cable to provide the necessary connection for carrying audio encircling the back. The headphones sit on a swiveled strip of metal that allows it to move up and down to accommodate the user’s ear position. They are also hinged so they can snap away from the ears at roughly 45 degrees should the user need to hear — a marked improvement over fumbling with earbuds or detached headphones.

At the rear of the headset is a large adjustment knob that provides one of the best features of the system – granular fit adjustments. Underneath that is a U-shaped “cradle” that slips under the occipital bone (the bottom rear of your skull) that provides a lot of the stability of the Deluxe Audio Strap. To route the cabling there is an integrated cable clip on the right hand side, funneling the cables to the rear.

Proper cable routing to the side.

The titular audio is provided by some fairly decent drivers. I don’t know who provided HTC with the headphones, or if they are home grown, but they are rock solid. Cushioned by a half inch of soft leather-covered padding, the headphones comfortably sit on the outside of the ear. Tackling quite a few VR titles, I never encountered any audio issues. Whether it was the high pitched tinkling of broken glass in Superhot VR or the thudding blasts of a shotgun in John Wick Chronicles, the quality was rock solid.

Better cable routing awaits you in the Deluxe Strap

If you happen to be an audiophile with super-expensive headphones you’d rather use, there is an option to remove the default headphones and swap in different ones. Since the 3.5mm jack port hangs from the 3-in-1 cable, it’s just a matter of unclipping the cups and slipping out the pigtail cable and you are off to the races. Frankly, I can’t imagine a need, but it’s a nice touch for those that want to customize.

Installation:
I was absolutely floored at just how easy it is to swap out the stock headset for the Deluxe Audio Strap. In all, it took me less than a minute to complete the whole process. On the sides of the visor there are the two circular Vive-branded discs that hold the old three strap system in place. Rotating the strap system towards the front of the visor allows you to pop the whole assembly free on both sides. Sliding the top velcro strip from the main unit is as easy as unstrapping it and sliding it through the ring. From there, you slide the three-part cable free of the sheath and you are done with the stock head strap.

It really is this simple to uninstall.

Surprisingly, it’s just as easy to mount the new headset as it is to remove the old one. The main strap that goes across the top of your head uses a slightly wider band that slides into the same place as its predecessor. Clipping the headset in, and using the aforementioned cable routing clip to secure the cables, completes the installation. It doesn’t get easier than that.

Adjustment:
The adjustment dial at the rear of the Vive Deluxe Audio Strap, with just a few turns, extends the arms of the headset a little over 2”. With the arms extended, the headset easily fits loosely, but some quick turns brings it snug to the face. With quite a few hours of time spent, I never felt like the headset was becoming loose, despite no tactilely-detectable detents or ratchet points. The PlayStation VR headset uses a stretchable strap type approach (with all the associated wear and tear concerns) with a small wheel for finer adjustments. Put simply, the team at HTC has the better design.

The ear cups, when clicked into position (it’s easier to get in and out of the rig with them extended) can slide up and down their mounting bracket roughly 2” of travel distance. This accounts for the variance in head sizes of any users you may be swapping between. As they are on a swivel, they can also rotate forward or backwards to land exactly where you need them. Best of all, when put into position, the light pressure exerted when pressing against your ears is enough to hold them in place — no screws, knobs, or other tinkering required.

Soft padding all the way around with the Deluxe Audio Strap.

The price:
Let’s face it – VR is still an expensive gambit at this point. While the prices are steadily decreasing, I can’t ignore that the HTC Vive Deluxe Audio Strap retails at $99. On top of the price of headset, this is a tougher pill to swallow – until you try it. Put simply, there’s no way I could ever go back to the pack-in headset. This is a fine example of “you get what you pay for”, but it’s also worth every penny. Better yet – it’s also compatible with things like the upcoming wireless conversion, TPCast — a nice bonus.

Ron Burke is the Editor in Chief for Gaming Trend. Currently living in Fort Worth, Texas, Ron is an old-school gamer who enjoys CRPGs, action/adventure, platformers, music games, and has recently gotten into tabletop gaming. Ron is also a fourth degree black belt, with a Master's rank in Matsumura Seito Shōrin-ryū, Moo Duk Kwan Tang Soo Do, Universal Tang Soo Do Alliance, and International Tang Soo Do Federation. He also holds ranks in several other styles in his search to be a well-rounded fighter. Ron has been married to Gaming Trend Editor, Laura Burke, for 21 years. They have three dogs - Pazuzu (Irish Terrier), Atë, and Calliope (both Australian Kelpie/Pit Bull mixes).
Related Articles: HTC Vive Deluxe Audio Strap
Share
Tweet
Share
Submit