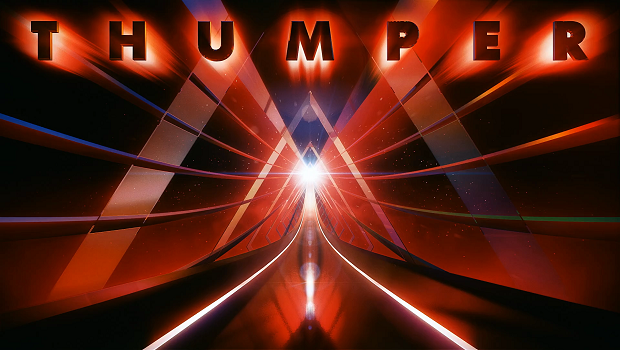 Let’s get one thing straight: The first real rhythm violence game was Space Channel 5 because you had to shoot aliens to rescue civilians to the beat of music. In all seriousness, however, Drool’s Thumper is probably the subgenre’s codifier, with an innate sense of speed and rhythmic action. Now that it’s released on the Switch, does the non-VR version of the game have what it takes to challenge and scare the pants off you the way its PS4 version did?

Dubbed as a game featuring “rhythm violence”, Thumper plops you into a chrome-like world where you control a little beetle on a lane. It’s you against the world as you dodge walls, spikes, and a whole host of other obstacles using a simple A button press and some quick moves with the left control stick. Throughout the lane are brightly lit spots where you’ll need to press A to grab points. Getting hit once will destroy your beetle’s shell, and sustaining another hit (without replenishing your shell) will send you back to the last known checkpoint. At the end of each level lies a boss that you’ll have to dispatch using these techniques. Simple, right?

While the fundamentals are relatively easy to grasp, it’s the execution that takes you for a wild ride. The first three of nine levels (filled with, on average, 20 to 30 checkpoint segments), eases you into the gameplay mechanics, but don’t let that fool you: Thumper is an excruciatingly difficult rhythm game. You aren’t given leeway at any point in time, and even some of the more relaxed segments of levels will grab your balls to the wall if you’re not careful. While on the longer side for rhythm game standards, as each level has around 30-40 minutes of content, it’ll be a miracle if you can wrap up a level in twice that time. Even for veteran rhythm fans, death is an inevitability, and you’ll have to go back to checkpoints frequently. However, the difficulty is unrelenting but fair, and because of how tactile the sound design is, you’ll feel satisfied after clearing a tricky segment that you’ve been stuck on for half an hour. Additionally, you can unlock Play+ mode after completing the first three levels, which adds permadeath (you only get two chances before you hit oblivion, good luck!) and more difficult routes in levels, among other surprises.

While the game is focused on the “rhythm violence” aspect, Thumper is also a great horror game. While it’s not something like Resident Evil or Silent Hill, the foreboding atmosphere mixed in with the looming head that challenges you at the end of each level feels terrific and unnerving. There wasn’t a time where I outright yelled in surprise, but the game does a great job in making its Rez-like visuals evoke a feeling of dread while you’re playing the game. From gates that will laser your shell off if you miss an A press to snakes that you’ll need to dodge, it’s a subtle mood, and one that Thumper pulls off excellently. Bosses are equally creepy; in addition to the aforementioned final bosses (I believe it was called Crakhed), you have tendril-filled minibosses that you’ll have to parrot sequences at in order to defeat. These challenges are stressful yet alluring, and it really heightens the tense aspect of Thumper.

And no, it’s not one of those tentacle-filled anime you keep hearing about.

We reviewed Thumper’s VR experience previously, and for the most part, the game remains unchanged, but takes advantage of the Nintendo Switch’s features very well. The lack of VR is apparent on the Switch, but its HD Rumble more than makes up for it. Much like Blaster Master Zero, Thumper’s inclusion of HD Rumble accentuates every wall bump, shattered spike, and unsuspecting death. It highlights the whole experience well, and almost feels like a 4D ride when playing the game in portable mode or with the Joy-Con grip. To add to that, the game performs well either way, with a full 1080p display in TV mode and 720p in portable mode. Thumper zips around at 60 fps regardless, and as a result, everything feels crisp whether you play it at home or on the go. Since segments are short and you can save mid-level, it really helps that you can just pick up and play the game whenever you’re stuck and need to take a break.

Like with the VR version of the game, Thumper still has problems with level variety and some issues with visuals. While the game is subtly different as you play (did you catch those time signatures?), the visual structure and presentation of each level are almost identical. As such, it can get a little tiresome later in the game, but for the most part, the style holds well. However, due to the frantic pace of it all, it’s sometimes easy to get lost when particle bursts fill the screen as you get hit. While mercy invincibility applies in this game, you only get a couple of seconds before you get rammed by a wall again. These distractions can actually infuriate when you suddenly lose on a good run because beetle glitter was in the way.

Thumper is a terrifyingly difficult game, but don’t let that deter you from experiencing its rhythm violence firsthand. The Switch port takes advantage of the system’s features quite well, and its speedy performance and killer sound design will rock your world.

Elisha Deogracias is an aspiring accountant by day, freelance writer by night. Before writing for Gaming Trend, he had a small gig on the now defunct Examiner. When not being a third wheel with his best friends on dates or yearning for some closure on Pushing Daisies, he's busy catching up on shonen manga and wacky rhythm games. Mains R.O.B. in Smash. Still doesn't know if he's a kid or a squid.
Related Articles: Thumper
Share
Tweet
Share
Submit