I last reviewed The Walking Dead: Saints & Sinners in February this year, and if you’ve read through that one already then you’ll know I had a blast with the story and the gameplay. Well, recently we were able to get a hands-on look at Skydance Interactive’s latest update to this title: the Meatgrinder Update.

The Meatgrinder Update brings in a new horde mode under the name “The Trial”. You can expect a Call of Duty: Zombies experience, but with a twist. Instead of opening doors and grabbing weapons off walls using whatever cash you have lying about, you’ll be running through your choice of the four new maps and crafting, looting, and killing your way to the end. It’s brutal, very brutal, and believe me when I say you need as much space as possible to do this one (I broke a lamp trying this one out). It gets hard very quickly, so you’ll need your wits about you to stay alive. 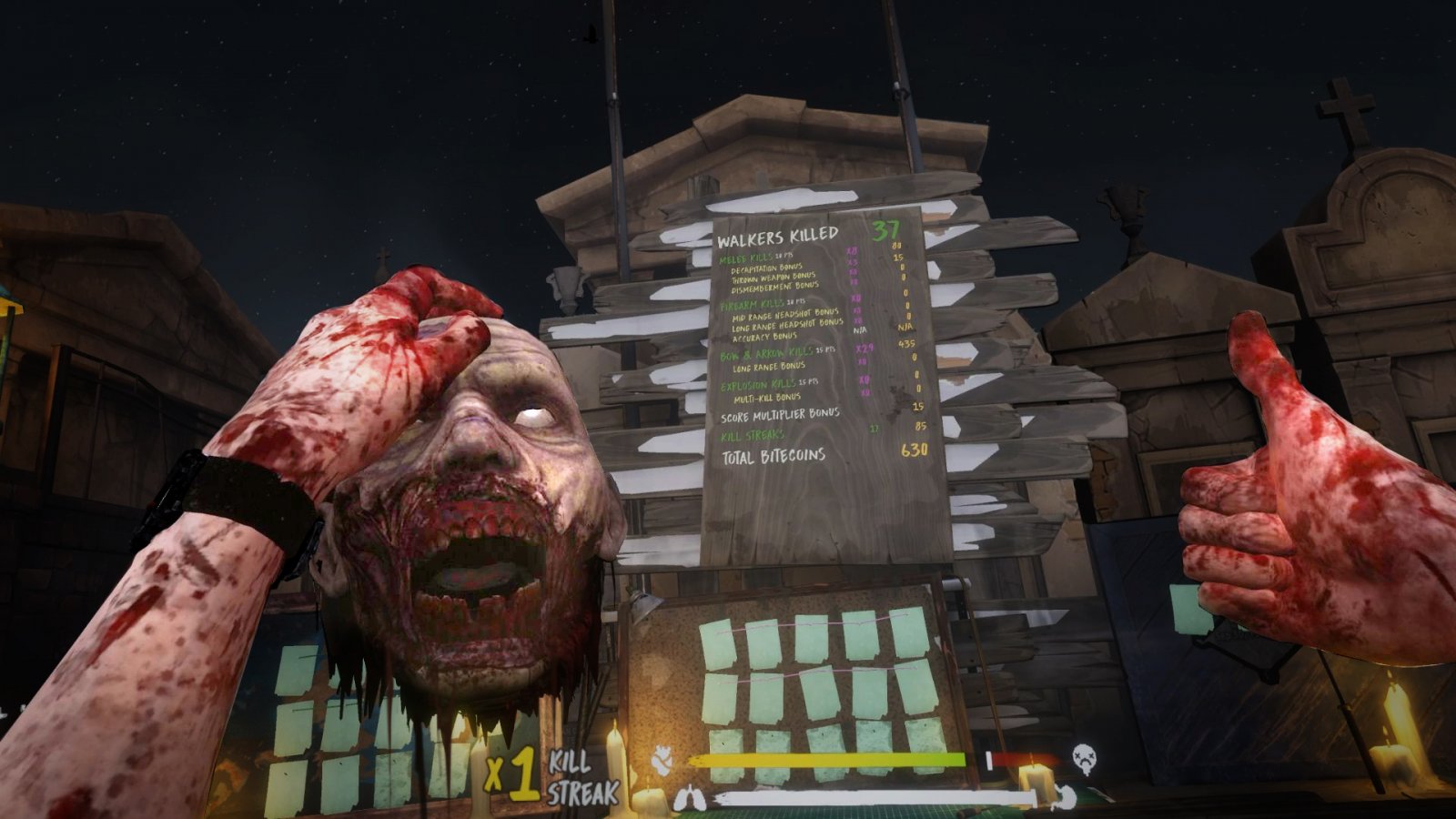 Also, a neat little addition to The Trial is the “standard” and “advanced” modes. The latter starts you off a few rounds later than the first and drops you right into the action. It’s preferable for players who are used to The Walking Dead: Saints & Sinners’ combat and want to skip the slower waves at the beginning. Do note, however; you won’t get any bonuses if you decide to skip those waves, so don’t go thinking you can enjoy huge rewards without earning them first.

Walkers will spawn in random locations, and you have the choice to hunt them down before they get to you, or stay put near the crafting bench and wait for them to feel your wrath. After killing walkers, you’ll earn Bitecoins (nice little play on words) which you can use to further craft weapons and supplies. If you’re familiar with The Walking Dead: Saints & Sinners then you’ll know that your weapons include knives, blades, baseball bats, revolvers, handguns, shotguns, bolt-action rifles, and bow and arrow. Protip: keep an eye on your Bitecoins because it’s very easy to spend a ton of cash in the early rounds and suffer in the later ones. If you fail to get supplies at the crafting bench or want some different crafting recipes, you can also find both randomly around the map. Keep an eye out for those recipes as well since they might be what saves you from your demise. 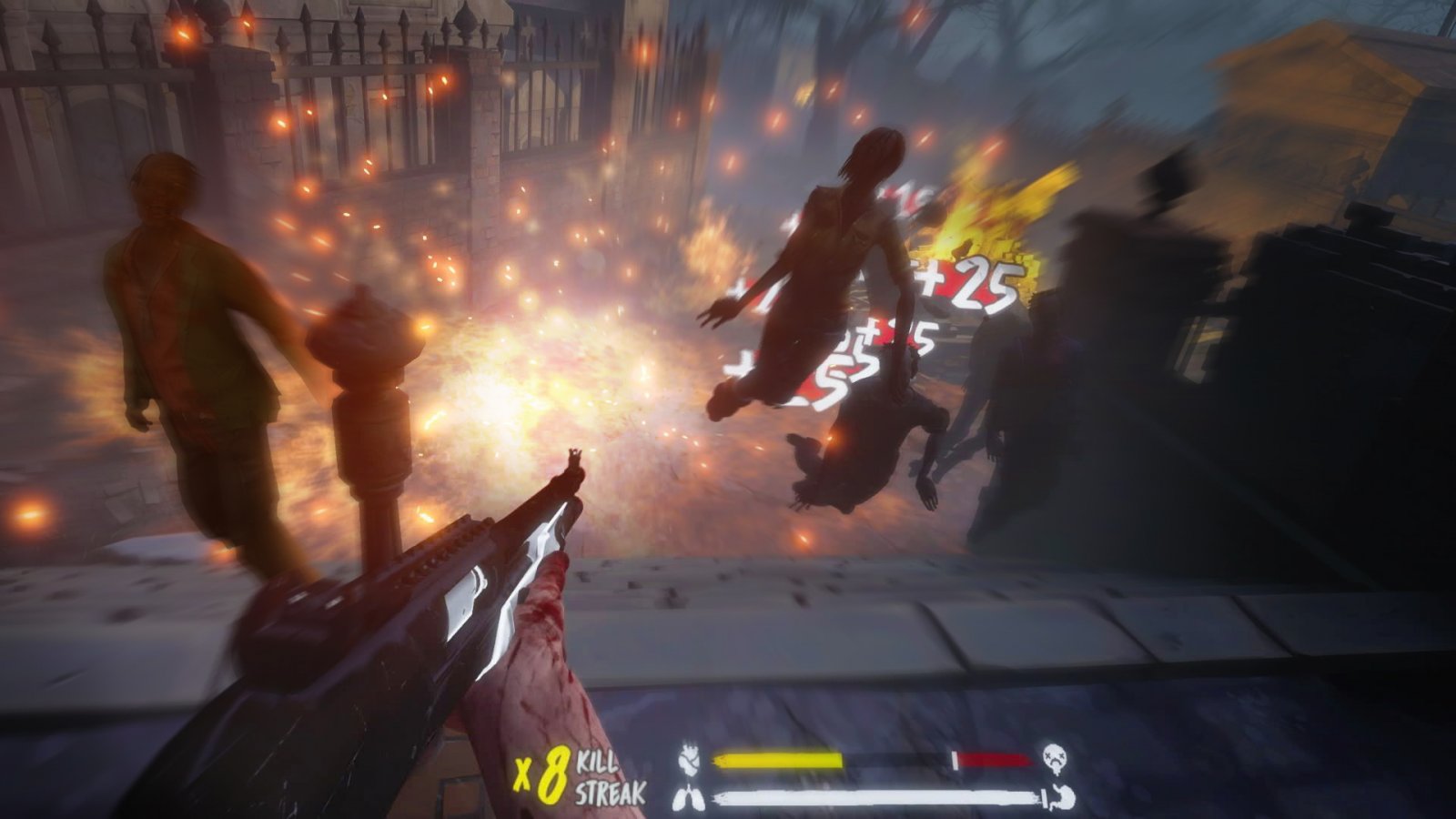 We also get a new skin for the katana; the Absolution. Use it to cleave through your enemies in style.

Finally, the update brings about a new campaign difficulty that prioritizes the game’s story over challenges. New players may find this very welcoming since the game can be quite brutal early on. Otherwise, it will allow players to explore the flooded streets of New Orleans, and experience the events within this game without having to worry about the next walker that sneaks up behind them and grabs them.

The Trial mode is a lot of fun, but, again, it’s brutal. You can see my gameplay above, and you might notice how many times I get grabbed. So, I’ll give a few tips so you don’t fail as much as I do. Firstly, always keep your health and stamina full using medicine and bandages whenever you have the opportunity to heal yourself up. This will save you from dying quickly in large fights, as well as allowing you to use the larger and heavier weapons without draining your stamina. Plus, if you need to run away, you’ll have the stamina to do so. Secondly, while you might decide that staying at the crafting bench is a good idea since you can always grab ammunition as you need, it is preferable to be on the move. It’ll allow you to (1) hunt more walkers down before the time limit of a round expires, and (2) allows you to have an exit strategy in case you get caught in a massive horde. Thirdly, and the most helpful (you might already know this if you’ve played The Walking Dead: Saints & Sinners before); grab a walker by the head and push it back to knockback other walkers in a group. It’s a highly effective method of crowd control and will keep you alive in those later waves. Plus, should you need time to heal, you can use the extra couple seconds to escape and find a place to do so. 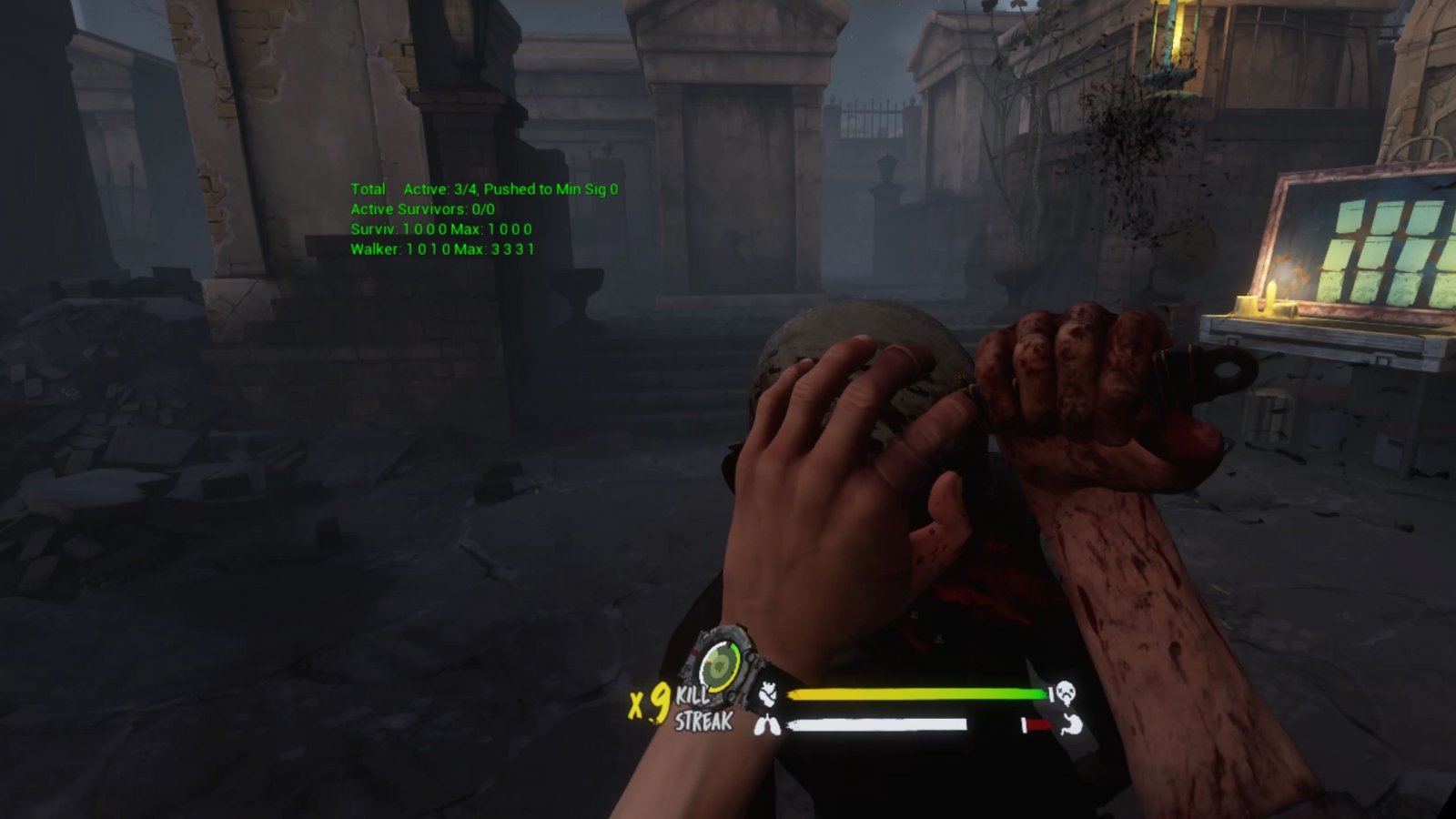 I do have a couple of grievances with this update, and they did occasionally impact my experience with this update. I found that when walkers grab the player, it’s significantly harder to shake them off. If you’re not moving your arms at Mach 1 then you’ll easily be killed by one. I don’t remember that happening in my experience with this title, so I found myself losing a lot in the early rounds because I didn’t react fast enough, nor move quick enough, to push them off. I also found myself experiencing some motion control issues. When moving my arms around on-screen, I found there was a significant delay in what the game processes. To put it into perspective, it’s the kind of thing you’d experience when you’re moving a heavy object around in-game, and the delay in motion is meant to give weight to the object. Yet, it’s a feature for those weapons, and otherwise a bug for me. That gave rise to many instances where I was fighting a walker and the delay in processing that I had attempted to grab its head allowed for it to instead grab my arm and have a nibble. Cue GAME OVER screen.

Overall, the newest Meatgrinder Update brings about a much-needed mode in the form of The Trial. It’s rewarding for players who are used to The Walking Dead: Saints & Sinners and want to try their hand at something new and test their skill. Alongside that, the added difficulty mode is a welcome addition for newcomers to get settled into the game without having to worry about the challenge of surviving a zombie onslaught. There were, however, a few glaring technical issues I experienced with this update that detracted from my overall experience. Once they’re ironed out, I’m certain that this game mode will give the replayability that players of this title have been looking for.

The Walking Dead: Saints and Sinners

The Walking Dead: Saints & Sinners gets new content with the Meatgrinder Update. Included is a new game mode titled “The Trial”: a horde mode which gives added replayability to veterans of this title. For newcomers, they get a necessary new campaign difficulty. Though there are a few glaring technical issues, I’m sure a later patch will iron them out and ensure players will love this title like never before.

With a deep interest in writing, Ben followed that into a Journalism degree. As an avid lover for gaming, he is constantly expanding his library with console, PC, and VR games. He's obsessed with stealth games and loves hunting down the smallest of details inserted by devs.
Related Articles: The Walking Dead: Saints and Sinners, VR
Share
Tweet
Share
Submit