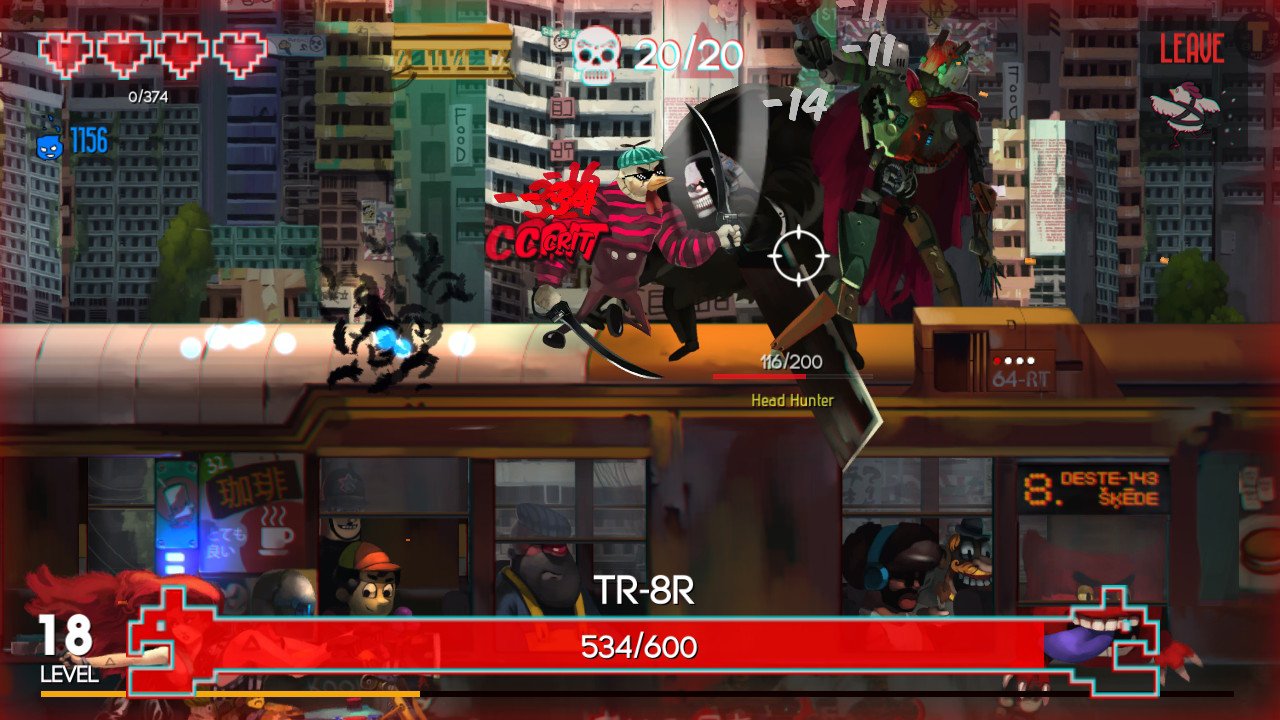 I have a weird relationship with clicker games: I enjoy them from time to time, but I understand that at the end of the day, they’re basically mindless entertainment. (You can imagine my disappointment when the two newest Katamari games were a clicker and endless runner.) Akupara Games recently released Chicken Assassin: Reloaded for the Nintendo Switch, and while it has the same problems clicker games are known for, it does enough to differentiate itself from its brethren.

From the beginning of the game, Chicken Assassin: Reloaded doesn’t take itself seriously, acting as a pastiche of ultra-macho action movies of the 80s. You play as Mean Mcallister, a chicken in need of an attitude adjustment. After his girlfriend gets captured by the bad guys, it’s up to him to crack some bones and defeat the various enemies across different stages. The presentation is an oddly endearing 2D style, with stiff movements that surprisingly work; the animation reminded me of The Metronomicon, and it has a goofy movement to it. The story is presented through still cutscenes that are interspersed between stages, and the narration is over-the-top and cheesy enough to work.

The presentation is unique, and the gameplay aims to match that, but is albeit limited by the standard clicker clichés. Mean Mcallister is positioned in the middle of each stage, and enemies approach you from the left and right. By aiming your cursor, you can tap the A button in order to dish out damage. You can also upgrade your stats every so often and level up once you destroy enough baddies. You can also obtain souls, the in-game currency used to purchase upgrades and other items (which will be explained below). Enemies will come at you in waves, with two bosses showing up in the middle and end of the stage. This is interesting, as stages have a finite end to them rather than being endless like in most clicker games. It’s oddly satisfying to hit wave after wave of enemies, and for the most part, the grind is addictively fun at first.

In addition to the main button mashing mechanic, there are also some RPG progression elements to the game. Throughout your adventure, you’ll obtain some items and equipment that you can give to Mean Mcallister to make him an unstoppable force of nature. You can also obtain different outfits from completing certain objectives that will makes your character look different in appearance, and it’s a pretty silly selection in tune with the cheesy tone of Chicken Assassin: Reloaded.

Beating up enemies will also grant you experience, and you can upgrade stats like attack, defense, and even passive bonuses like a bigger soul wallet or the ability to heal after defeating an enemy. It’s surprisingly deep for a clicker, and does increase replay value for those needing an incentive to keep playing. Rooster Tales act as an achievement system of sorts, and grant souls for completing different tasks throughout your playthrough. This is a neat little way to extend longevity, and you’ll mow down through a bunch of these goals pretty quickly.

While Chicken Assassin: Reloaded at its core is entertaining, there are still quite a few issues that hold it back from clicker greatness. While there is a whole lot of content for a clicker (with over a dozen stages), the progression system is rather stunted, as failure is all but inevitable on later stages. This forces you to keep going back and grinding, in turn slowing down the midgame to a crawl. After an hour of playing, I started to get a little disenchanted by the grind. While the enemy designs are unique and numerous, the fact that they can basically all be defeated by mashing one button kills the individuality of the them. They end up having more attack and health the further you go, so it’s all just a grind with no real strategy. Depending on how you enjoy clickers, this is a good mechanic, but it makes the overall product feel generic and full of boring filler. This is a shame, since the RPG mechanics would have made the game a much more enjoyable title, but the clicker roots hamper those.

Finally, while the presentation is unique and charming at times, the performance of the whole thing is underwhelming. While docked, the game runs at a good clip, but undocked, there are framerate dips and input lag, which makes the game less enjoyable when there are multiple enemies on screen. Oddly enough, the game uses a mouse cursor that feels clunky and slow when trying to select anything, and you can’t even use touchscreen controls, which would have been a godsend in undocked mode.

The UI is unintuitive as well, and there were some times when I couldn’t even choose what I wanted. Egregiously, at the end of stage screen (where you can select your loot), the “take” and “take all” buttons are mapped to the same input, so pressing them would inadvertently add every item I got from potential spoils into my inventory. Normally, this isn’t a problem, but when you have limited inventory space and the first items that you’re forced to take are common ones, it gets annoying when I can’t have access to the better items due to a programming error. This also compounds an issue with sidequests (delivered by the Black Market option), since the person requests random items at different times. If I can’t get to my inventory, these optional quests become extremely difficult and I ended opted to skip them a couple stages after it opened up. Frustratingly, a notification would pop up every single time a new one was offered, and it was irritating.

Chicken Assassin: Reloaded has good intentions with its clicker-style gameplay, and has a cheesy art style and presentation. However, a few performance issues mixed with UI problems and some monotonous grind mechanics make for a mixed experience that entertains as much as it frustrates.

Elisha Deogracias is an aspiring accountant by day, freelance writer by night. Before writing for Gaming Trend, he had a small gig on the now defunct Examiner. When not being a third wheel with his best friends on dates or yearning for some closure on Pushing Daisies, he's busy catching up on shonen manga and wacky rhythm games. Mains R.O.B. in Smash. Still doesn't know if he's a kid or a squid.
Related Articles: Chicken Assassin: Reloaded, Indies
Share
Tweet
Share
Submit