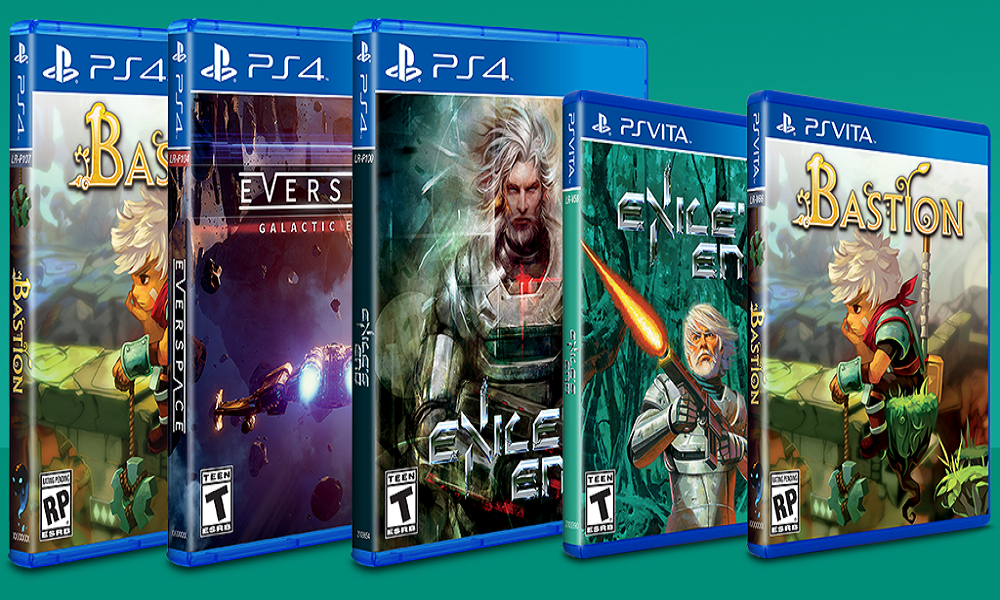 If you’re ready for more physical collectible goodness, Limited Run Games has announced that it has opened pre-orders for the PlayStation 4 versions of Everspace: Galactic Edition and Bastion, as well as the PlayStation Vita version of Bastion. In addition, these games will be open to pre-order from 10 AM EST today until August 26. For those that want a more traditional LRG experience, Exile’s End will be available today at 10 AM and 6 PM EST in a limited quantity for PlayStation 4 and PlayStation Vita.

Everspace’s PlayStation 4 release has had an interesting history, as stated in today’s press release:

Everspace: Galactic Edition is the complete release of ROCKFISH Games’ space-shooter. Originally scheduled for a traditional retail release through BadLand Games, that deal fell apart, and we picked up the responsibility of publishing this fantastic game physically.

This physical release through us is the worldwide exclusive physical release. It is an open preorder and it will be available for a month. There’s no stress involved in picking a copy up. If you previously had this on order from somewhere else – just move that over to us.

EVERSPACE™ is an action-focused single-player space shooter combining roguelike elements with top-notch visuals and a captivating non-linear story. It takes you on a challenging journey through an ever-changing, yet beautifully crafted universe full of surprises. Your skills, experience and talent for improvisation will be tested continuously while learning about your own existence through encounters with interesting characters, each having their own part of the puzzle to tell. Each run will be exciting as you will have to face completely new situations keeping each part of the game long-lasting and generating lots of individual, meaningful moments to experience. However, no matter how skilled a pilot you are, death is inevitable, but only the beginning of a much larger journey.

This release includes a behind the scenes booklet, the game’s DLC included on disc, and a three-disc soundtrack set in an awesome double decker CD case – all for the same $39.99 price tag of the canceled BadLand release.

On the other side of the spectrum, we have Supergiant Games’ indie darling Bastion:

Bastion is an action role-playing experience that redefines storytelling in games, with a reactive narrator who marks your every move. Explore more than 40 lush hand-painted environments as you discover the secrets of the Calamity, a surreal catastrophe that shattered the world to pieces. Wield a huge arsenal of upgradeable weapons and battle savage beasts adapted to their new habitat. Finish the main story to unlock the New Game Plus mode and continue your journey!

Finally, Exile’s End has a standard release for the PlayStation 4 and Vita versions, limited to 3,000 copies per platform:

Exile’s End (published by XSEED Games) is an homage to early 90’s action-adventure PC games like Flashback and Another World, but with a Japanese flair. The core of the game is from Australian game maker Magnetic Realms with art, cutscenes, and music provided by legends of the 8 and 16-bit eras from Japan. It draws its thematic influence from the science-fiction films and anime of the 80’s and its gameplay from classic Amiga and Commodore 64 action-adventures.

Check out our review of Everspace, and stay tuned for more news here on Gaming Trend.