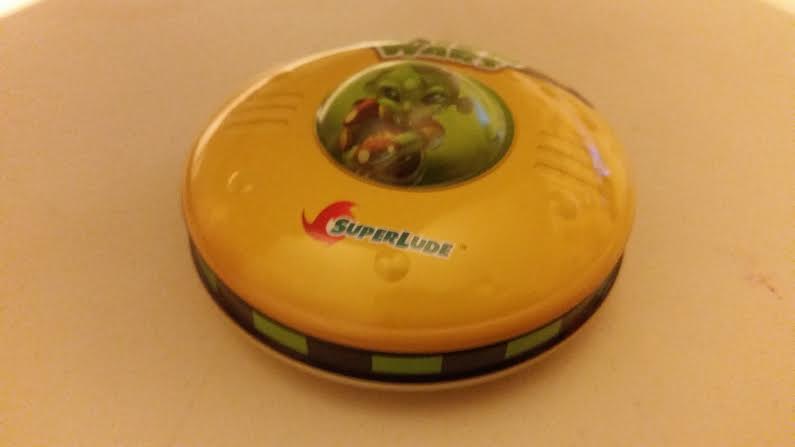 Just as I was beginning to open up Iello’s Alien Wars, a trailer for the new Independence Day movie appeared on the screen. By the time I finished playing the game, I couldn’t help but note the similarities between the two. Sure, the alien invasion ships in Independence Day look exactly like the tin used to store the cards used in Alien Wars, that familiar looking flying saucer, but the comparisons go beyond mere looks. Independence Day was never meant to be taken seriously. It’s an over-the-top action movie filled with cheesy dialogue and special effects, all meant to leave you feeling happy as the end credits roll. Alien Wars is designed to do the same thing. There’s nothing serious here, from the cartoonish illustrations to the simplistic game play, Alien Wars is a game meant to leave you happy and nothing more.

Inside the small three inch tin are enough cards for six players to wage war.

Grasping the rules will not be difficult as the game is a more violent version of Memory. Each player gets a nine card army of aliens. Most have attack values while some allow you to respawn fallen aliens back into the battle. Three minefields are placed on the board and then players place their alien armies face down around them. Players in turn then select and flip one of the cards. The player owning the card then activates that effect. Again, most cards attack, but some do allow you to secretly look at other cards or defend yourself when attacked.

Adults will have little trouble attacking.

Players do have to follow certain rules when attacking. As the disc is tossed, the pinky cannot leave where it’s resting. This is not going to be a problem for adults. A game between adults will almost always be a fast, boring affair as players will quickly remember the locations of their own cards and easily strike out against their opponents. Luckily, the game is not for adults. For kids, the dexterity mechanism will pose a bit more of a problem. I played this game against my twin six-year-olds. Their little hands have trouble manipulating the attacks. If anything, this game will be a great way for young children to practice a little hand-eye coordination. Older kids will likely find this game too easy. It should be noted that unless you enjoy stomping six-year-olds into submission, adults should definitely take it easy when playing against younger opponents.

Meanwhile, little hands may have trouble with the dexterity aspect at first.

The artwork is comical, with alien races of pirate pigs, giant eyes, and ill-tempered looking squid making up some of the well-illustrated armies. The card stock is a bit on the thin side, but Iello did limit the coating enough so the cards won’t slide off the table on anything other than the hardest of throws.

This game won’t have the universal appeal of Iello’s hit King of Tokyo. Still, this is a nice, inexpensive family game that will appeal to younger audiences. It’s cute enough to attract them, fast enough to keep their attention, and challenging enough to keep them coming back.

Alien Wars provides a twist on memory by adding dexterity to the game. Yet, the added dexterity may be difficult for the young children the game is aimed toward. Mastering that opens up a quick and entertaining game.