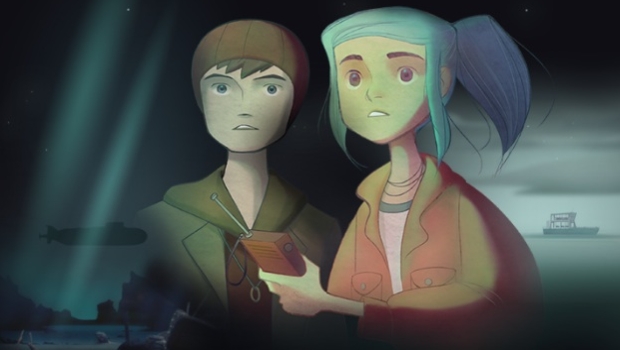 The past weighs heavily on those who choose to bear it alone. Even on an island away from all the noise of life, in a youthful rite of passage on a secluded beach, Oxenfree pulls few punches in taking its five teen protagonists, and the player, on a journey through their darkest doubts and secluded desires.

Oxenfree is told through the viewpoint of Alex, on the summer before her senior year of high school. Alex and three of her friends embark on a yearly ritual of the school’s, where they head out to nearby Edwards Island to drink and party on the beach. In tow is Alex’s new step-brother Jonas, a moody teen with a checkered past. When they find out that Alex’s pocket radio can tune into frequencies that make lights appear on the island, though, things start to get out of control fast. Soon, you’ll be locked in a race against the sun to find a way off the island; if the creatures you’ve unleashed let you leave, that is.

At its best, Oxenfree is somewhere between the supernatural and human, using the ethereal beings and strange occurrences on the island to delve deeper into its cast’s insecurities, fears, and psyches. As you learn more about why tears in space exist, why beings have started possessing Alex’s friends and why she’s the only one not affected, you begin to gain greater insight into the demons each teen carries on their shoulders.

There’s always something lurking just out of view.

That said, most of the time is spent on the main players, and part of the main cast feels a little left to the side to make way for Alex and Jonas. The two step-siblings have stories that deal with loss and guilt in superb manner, but some of the supporting characters like the class clown Ren and silent, artsy Nona don’t get much in the way of exposition.

The art style of Oxenfree is often breathtaking, with painterly landscapes contrasting the simple, molded 3D models of the different characters. The music is also fantastic, moving from electronic pop beats to ambient, eerie pieces effortlessly to fit the mood. The use of musical themes is especially effective during Jonas’ biggest story beats, in a way that ties together a lot of elements really well.

Throughout the game, Night School Studios uses different audio and visual manipulations to convey strange occurrences on the island to great effect. When time loops occur, the game rewinds and displays static bars like a VHS tape, and supernatural elements can toy with the screen’s orientation, flipping it upside down or reversing it.

So much of Oxenfree relies on atmosphere and it’s relieving that it works well, because a lot of the gameplay is otherwise straightforward adventure fare. There’s a lot of walking and interacting, and often the input is fairly basic. Radio tuning the lights and spirits is an interesting mechanic but a little underutilized, and when you start backtracking outside of the story, whether it’s to find collectibles or just explore, the slow gait of traversing the environment becomes much more apparent without story events or conversations. I also had a few issues with crashes during my time, something I’m sure will be fixed in a day one patch, but bears mentioning as I hope it gets patched up right away.

Tuning your radio can open portals to other realms — though that isn’t always a good idea.

The most interesting mechanic of Oxenfree comes through those conversation bubbles, which pop up as you walk from place to place. They allow you to answer questions and talk with other characters while still having a full range of movement, and it adds a very believable, conversational feel to the way that the five teens interact with each other. It also means that most choices are masked, and you don’t really get a solid indicator of whether or not you’ve made someone happy or mad with the things you’ve said outside a few obvious reactions.

These choices build up into major outcomes for the game, but because they’re so vague, I was left wondering at the end just what the options were. There’s the standard “see what you chose vs. what others chose” pie chart, but you don’t get a chance to see the other options that were available — and when you see enough slivers on a pie chart you expected to be rather simple, it leaves you wanting for information.

In fact, a lot of the game’s ending had me asking questions, and it’s a little unsettling. I’m sure the last moments of Oxenfree will be controversial, in the same way that the ending of Inception had people talking for weeks on end. It’s more than just the last big twist, though, as I felt like I only glimpsed into the lives of these characters.

Part of my morbid curiosity wants to go back and change things, see if I could make a difference, see if I believed everything I was told was truth. Much of this game’s mystery is built on you never being sure on what the whole truth of the island is, or knowing the real story behind each teen’s personal issues, as you rarely ever get a definite answer. The fact that I’m still unsure of many things about this game is unsettling, but it’s also one of the reasons it felt like such a compelling experience.

If you enjoy the mystery and intrigue of a lost island, mixed with human emotions and great moments of gameplay that bend your preconceptions, Oxenfree is some of the best fuel for that fire I’ve seen in awhile. The characters are painfully human, and discovering the truth of Edwards Island and its inhabitants is intoxicating. Oxenfree pulls the best from teen flicks and supernatural thrillers to create a true early contender for the year’s best in indie game development. If the rest of the year follows Night School Studio’s lead, we’re in for a good time.

Oxenfree is a smart, emotional adventure that feels focused and purposeful. It’s got plenty of narrative twists that lead to great “a-ha” moments, but keeps the story well-grounded in its compelling protagonists and clever gameplay moments. Oxenfree is simply well-made, endearing, and very memorable.