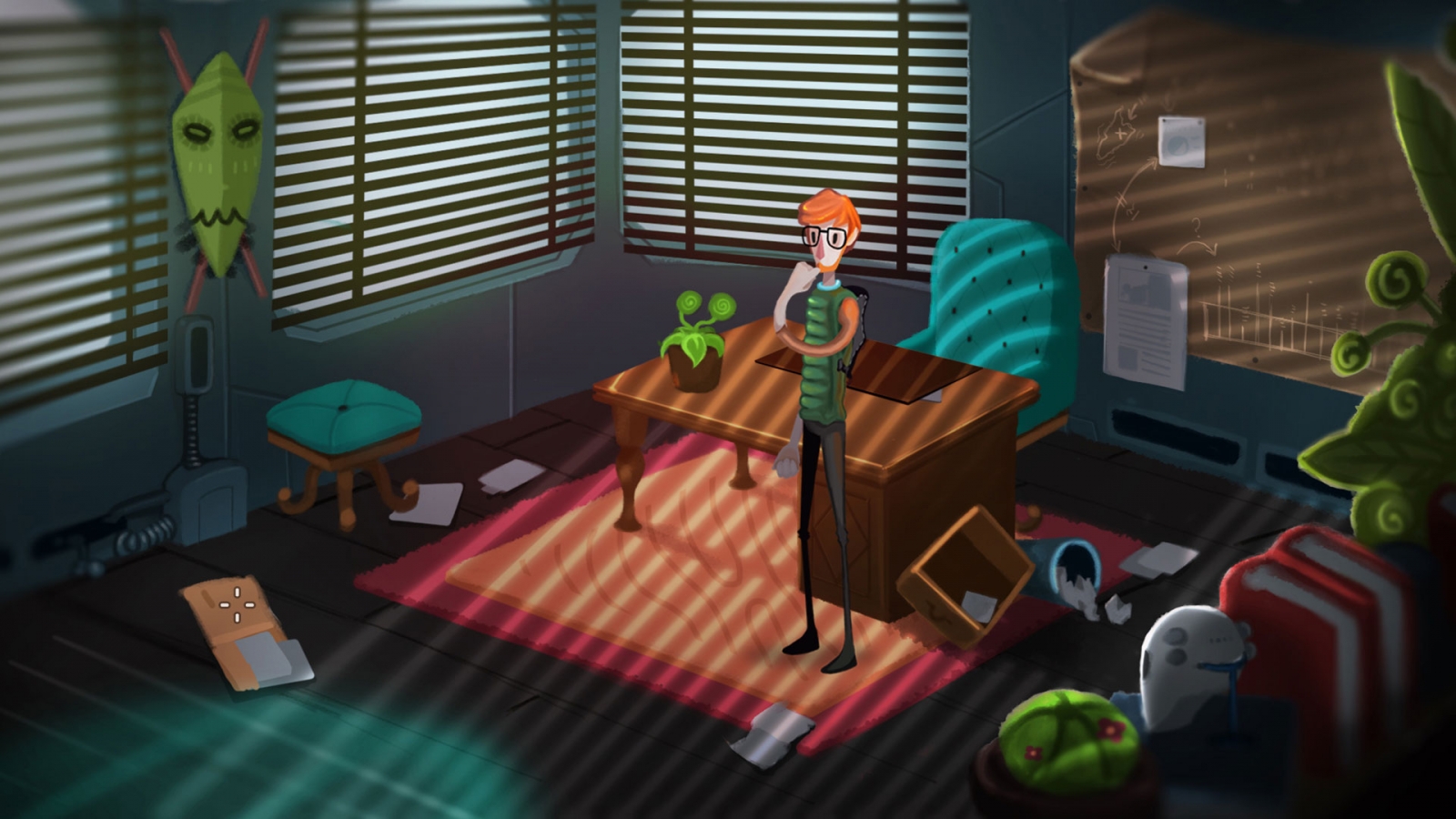 Ever since I was a kid, I’ve enjoyed point and click games. There’s so much to figure out, making it somewhat of a puzzle adventure. The earliest one I remember in that style was Hugo’s House Of Horrors, and although the player used a keyboard more similar to Maniac Mansion, it still matches up with the genre we have today. Mutropolis is one of the latest examples of this grouping of games, and after reviewing Unforeseen Incidents by Backwoods Entertainment nearly two years ago we just had to see what the same publisher, together with new developer couple Beatriz Gascon and Juan Pablo Gonzalez of Pirita Studio had for us next.

First off, I just have to remark on the visuals of the game. It’s absolutely gorgeous. There are over fifty hand-drawn scenes, and it gives Mutropolis a soft, tangible feeling. The characters don’t feel out of place or stiff in their movements given the art style either, as they saunter across the screen as easily as any animated character should. Each area you go to also feels so vibrant, with even the morgue paradoxically filled with life. It helps admittedly when you have a colorful character down there, but it shows a conscious effort to make each environment feel special. This extends over all three acts, between the dig, the university, and the larger search for Mutropolis.

The story is a simple idea that evolves over time. The first act is very short, but it sets up the plot quite nicely. It’s the year 5000, and you are an archeologist known as Henry Dijon (yes, that’s his real name). You are on an expedition, just going around trying to discern the past of Earth given that most everyone left to live on Mars after a catastrophic event drove humanity away. After walking around in the cave searching for your trowel you’re able to open a door, and inside the room part of a word is revealed on the wall, seemingly in reference to the fabled city, Mutropolis. Your boss, Totel, has been pining to find this Atlantean-esque location, but in the midst of digesting what’s in front of you, the lights go out, you’re smacked in the back of the head, and Totel is kidnapped. It’s up to you and the rest of the department to save him, and maybe find a lost city along the way.

Thankfully the game doesn’t take itself nearly as seriously as this subject matter sounds, with a ton of humorous dialogue mixed with a bunch of pop culture references. The pop culture references are hilarious, both in the context of being found almost 3000 years later, and the ones mixed in, like “Dr. Johansolo” sitting in a lobby and looking just like our favorite scruffy-looking nerfherder, or Al Capone referenced in a historical book being thought to be a popular quiz show host or soap actor. It’s a fun way of using existing things to engage with us and make the game feel a little more personal. This makes its way to the characters as well, with not only great voice performances present, but enjoyable and interesting interactions with them as well. My favorite character probably has to be Frida, the perky morgue worker who reminds me of Princess Bubblegum from Adventure Time. She’s only present in Act 2, but she definitely makes an impression.

As far as the gameplay is concerned, you are going to be using your left click a whole lot. In fact, you can play this game with just your mouse. The only other button that I needed was for my inventory, and that was mapped to the scroll wheel. As you progress through the game and click things, occasionally something will be available to pick up. You don’t have to do anything manually there, and Henry picks up everything on his own after observing it. The genre of Mutropolis says it all, you’re going to point AND click on a bunch of stuff as you figure out this story.

That’s where the shortcomings of Mutropolis come in. It’s a lot of fun to discover things, talk to people, and solve problems with both dialogue and inventory items, but after the midpoint of Act 2 I found myself really lost as to what to do. Some of the solutions to the puzzles I had to figure out were out in left field, things I truly would never have thought to do. A good puzzle game challenges you, but quite a few times I was left frustrated as to where I was supposed to go from that moment. It’s never fun to just go to different areas clicking until something happens, and sometimes you would have to simply try clicking different characters with inventory items in hopes something would occur.

This brings you to the next hiccup, there’s no guidance or hint system. It would be nice if I could see an objective, or maybe have Henry give me some advice if I got stuck, but there isn’t anything of the sort in Mutropolis. I’m not asking for my game to hold my hand, because I enjoy solving the mystery behind my current goal, but it makes a player frustrated when they can’t progress past a certain point due to a lack of direction. I could attribute this somewhat to the story, but in the end there were multiple points where I knew what I was supposed to do, I just had no idea as to how to do it.

Mutropolis is a fun game held back by unforgiving speed bumps. I am enthralled by the beautiful art style, and the tone the game sets in the narrative leaves you having a good time. But it’s hard to enjoy what you’re doing if you can’t move forward, and I too often found myself at a stop sign.

David Burdette is a gamer/writer/content creator from TN and Lead Editor for Gaming Trend. He loves Playstation, Star Wars, Marvel, and many other fandoms. He also plays way too much Call Of Duty. You can chat with him on Twitter @SplitEnd89.
Related Articles: Mutropolis
Share
Tweet
Share
Submit