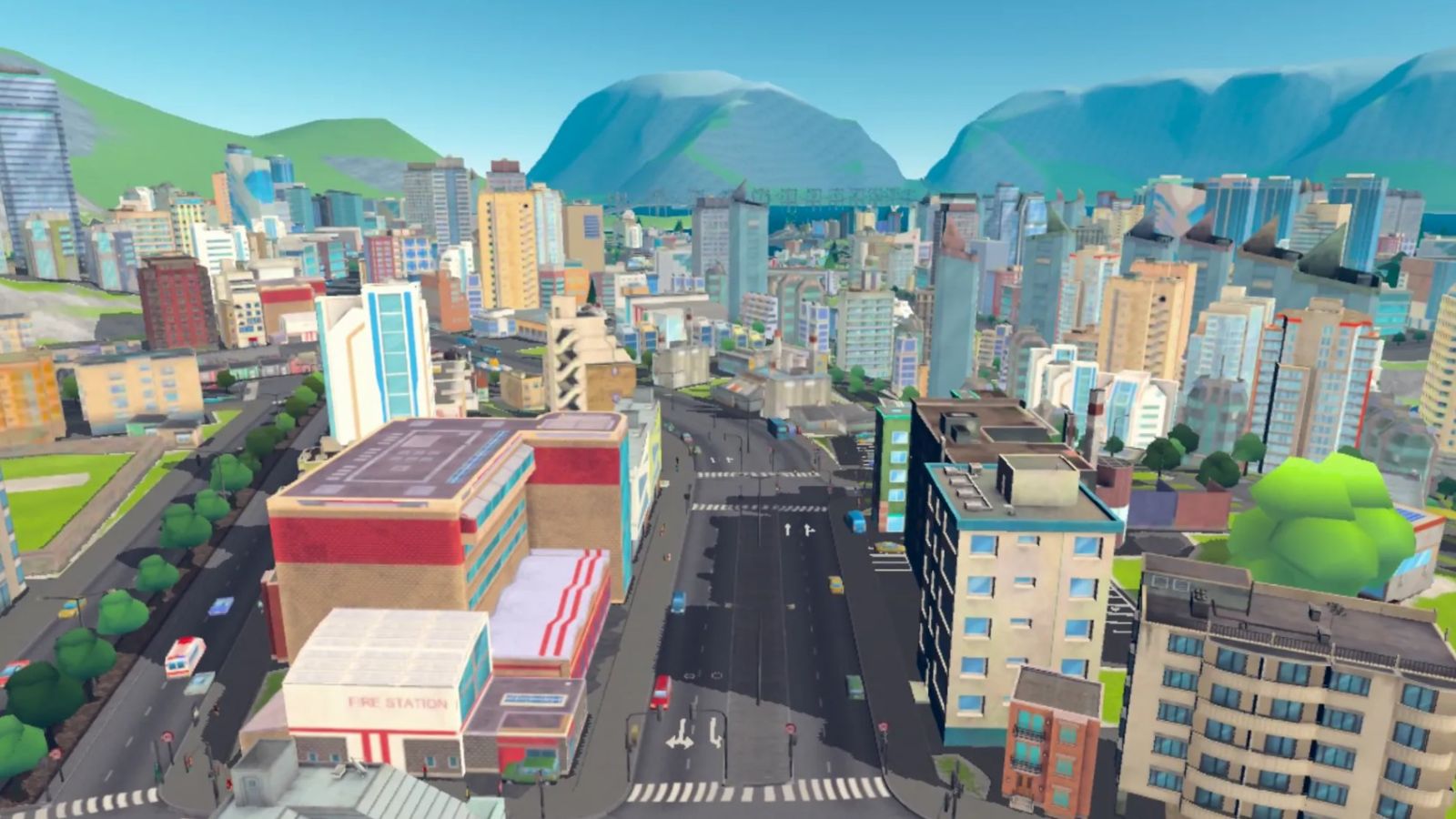 EA’s SimCity 2013 has one huge feather in its cap — it inspired developer Colossal Order to make the far-superior Cities: Skylines! Chock full of awesome city building action, the game has a metric ton of expansion packs and will easily eat up your time like so much candy. Well, what if you could get into the city building action in virtual reality? Let’s pop on our Oculus Quest 2 and find out if Cities: VR is a skyscraper or if we should declare this game condemned.

Developed by Fast Travel Games (developers of the excellent VR music maker, Virtuoso), Cities: VR is a slimmed down version of Cities: Skylines. Just like its bigger brother, the game starts with some short tutorials to show you how the various mechanics work. And just like the pancake-screen version, you’ll unlock additional buildings and options by bringing in as many people as you can to grow your fledgling city. Hitting milestones gives you more tools to play with, letting you expand your city and subsequently manage it according to your whims. But what if you could do all of it from a brand new perspective? Cities: VR looks to do exactly that, putting players directly into their own municipal sandbox and turning them loose.

If you are unfamiliar with city builders like Cities, Skylines or otherwise, the objectives are simple on the surface, as are the mechanics. It all starts with placing roads, pre-planning how your citizens will move around your city. Essentially, do the opposite of any real-world city, and give some thought to traffic, road width, and where you might expand various portions of your burgeoning hamlet. With your arteries laid out, it’s time to place your first districts. Selecting industrial, commercial, or residential, you’ll “paint” the portions of your city that you’d like to correspond to each structure type. It’s crucial that you give a care as to how much room you leave for expansion as larger buildings require more space. Once your people have a place to live, they’ll need places to shop. Commercial spaces satisfy these types of needs. The industry that acts as your city’s primary income comes from your industrial zones, generating the most taxes. Simple, right? 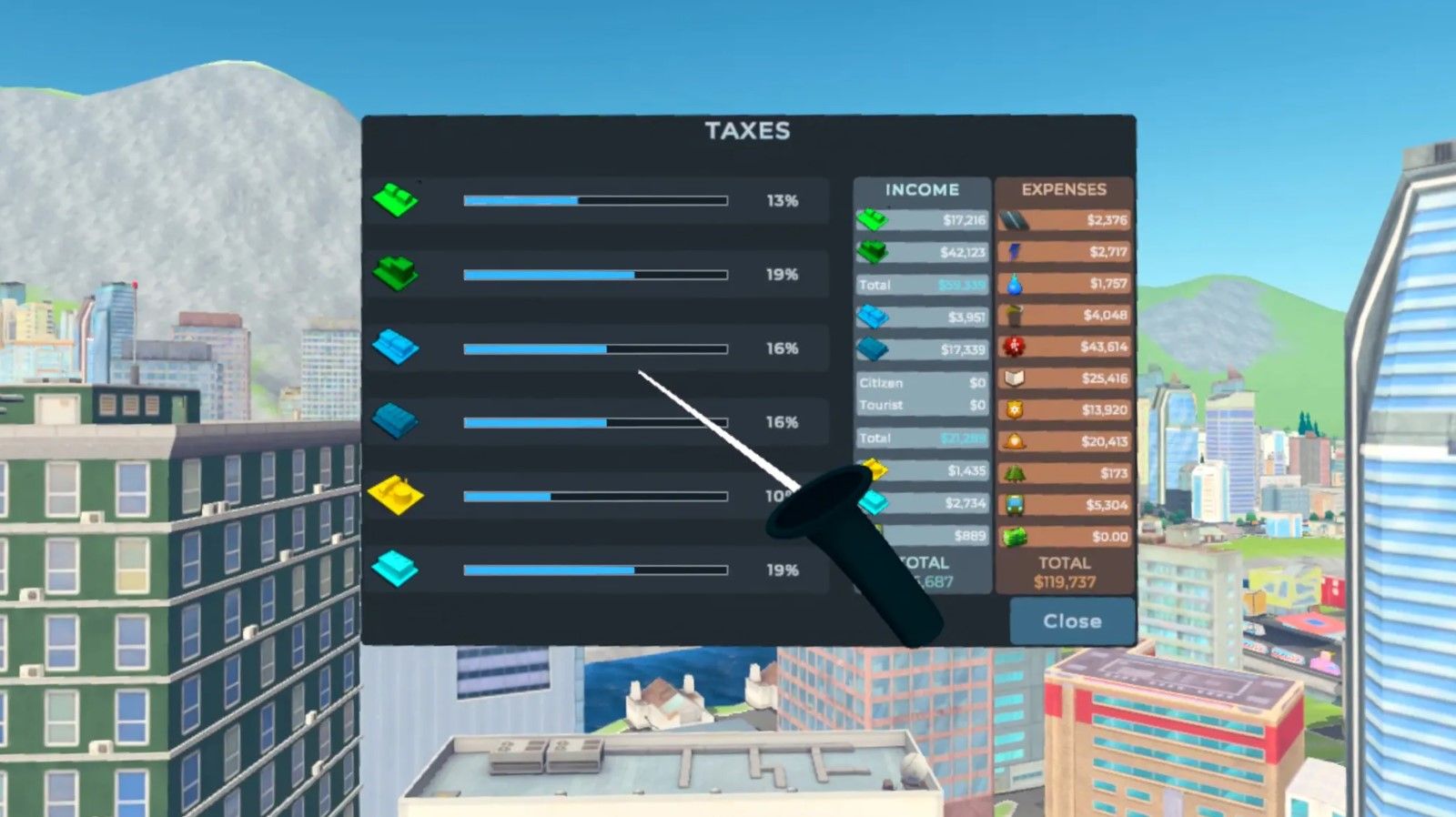 As your city grows you’ll need supporting infrastructure. Piping from the local stream carries water from a pump, but be sure to place your “used” water return downstream, lest your people “involuntarily recycle” toilet water. Power can come from traditional coal, but that’s messy. Nuclear is expensive, but offers tremendous power in exchange for a little bit of risk and waste. Solar and wind are less efficient, but there’s nothing better for the environment. Fire, police, ambulance, and education institutions need to be placed within a certain distance of the neighborhood they’ll serve. Fulfilling these needs allows them to grow (hence the need for additional room – they can only grow till they run out of space), and with each level of growth, additional tax revenue to build out the rest of your city. It’s a satisfying and challenging gameplay loop that only gets more challenging as your city grows beyond your control. Unfortunately, this is where the shortcomings of the Cities: VR manifest.

All of the core gameplay loop of Cities: Skylines are present in Cities: VR, but at a smaller scale. You can still build out your districts, place your supporting infrastructure, and otherwise build the city of your dreams. Likely due to the limitations of the hardware, Cities: VR restricts the size of your city in a way that certainly makes it feel more boutique than sprawling metropolis. Additionally, some of the detail is lost as you can see when you get up close and personal with the various buildings in your city. The standalone headset just doesn’t have the horsepower to handle hundreds if not thousands of buildings in the environment, resulting in some fairly flat textures and low resolution environments when you look closely. I’ve got wired headsets that could take advantage of my PC hardware, and frankly, I’d rather have a wire and gorgeous environments than a portable city builder. 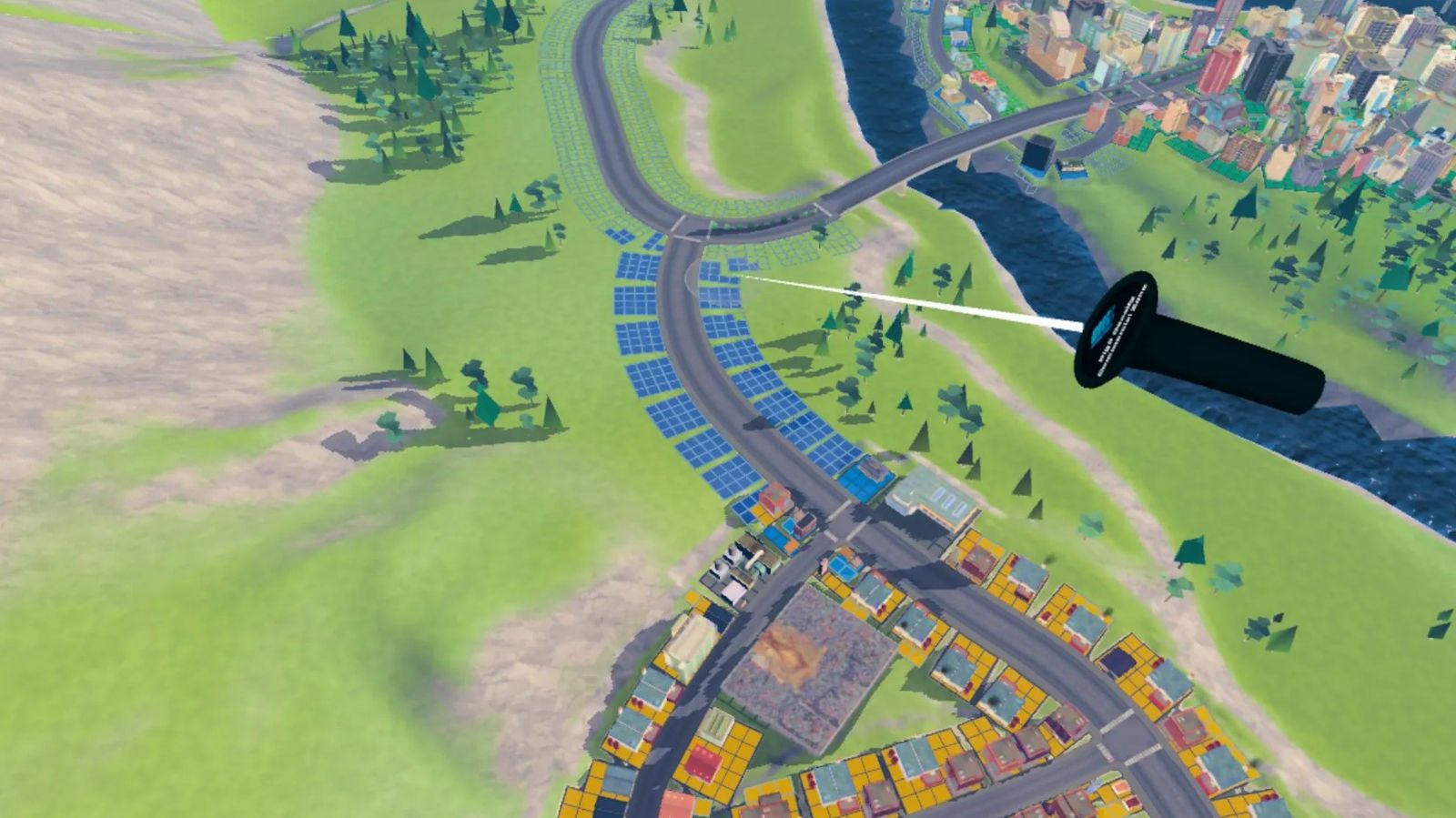 There’s a challenge in adapting complex games to the simple controls of VR. Some games do it well, and some fall on their face. I’m glad to say that Cities: VR does a decent job of translating the myriad functions of the game to the controllers of the Quest 2. It does mean that many things are buried in layers of menus, but after a short adjustment period, you’ll be zipping around and laying down new commercial districts in no time.

Cities: Skylines is practically overflowing with additional content for devotees of the series, and there are some encouraging words to that effect nestled in the menus of Cities: VR, reminding players that this is just the beginning. Additional free content is coming, and given how much Cities Skylines has expanded over the years, it’s likely that we’ll see it keep coming for quite some time. Whether that content continues to be free or scaled back for this game remains to be seen.

There are some features that are outright missing that could be added with these expansions – namely terrain editing and natural disasters. The former is useful for shaping unique cities that lie in a basin, are perched on a mountaintop, or have archipelagos at every turn, but that’s currently unavailable. Sure, it’s a feature for players who are more advanced in their city building adventures, but for series veterans it’s a noted absence. Natural disasters are, at least for me, what I lean on when I need a break from city creation. Unleashing chaos on your city, at least for me, is an end-stage event to enjoy watching the unrestrained power of nature obliterate all you’ve wrought. It’s not currently in Cities: VR, but far from outside the realms of possibility for a later date. 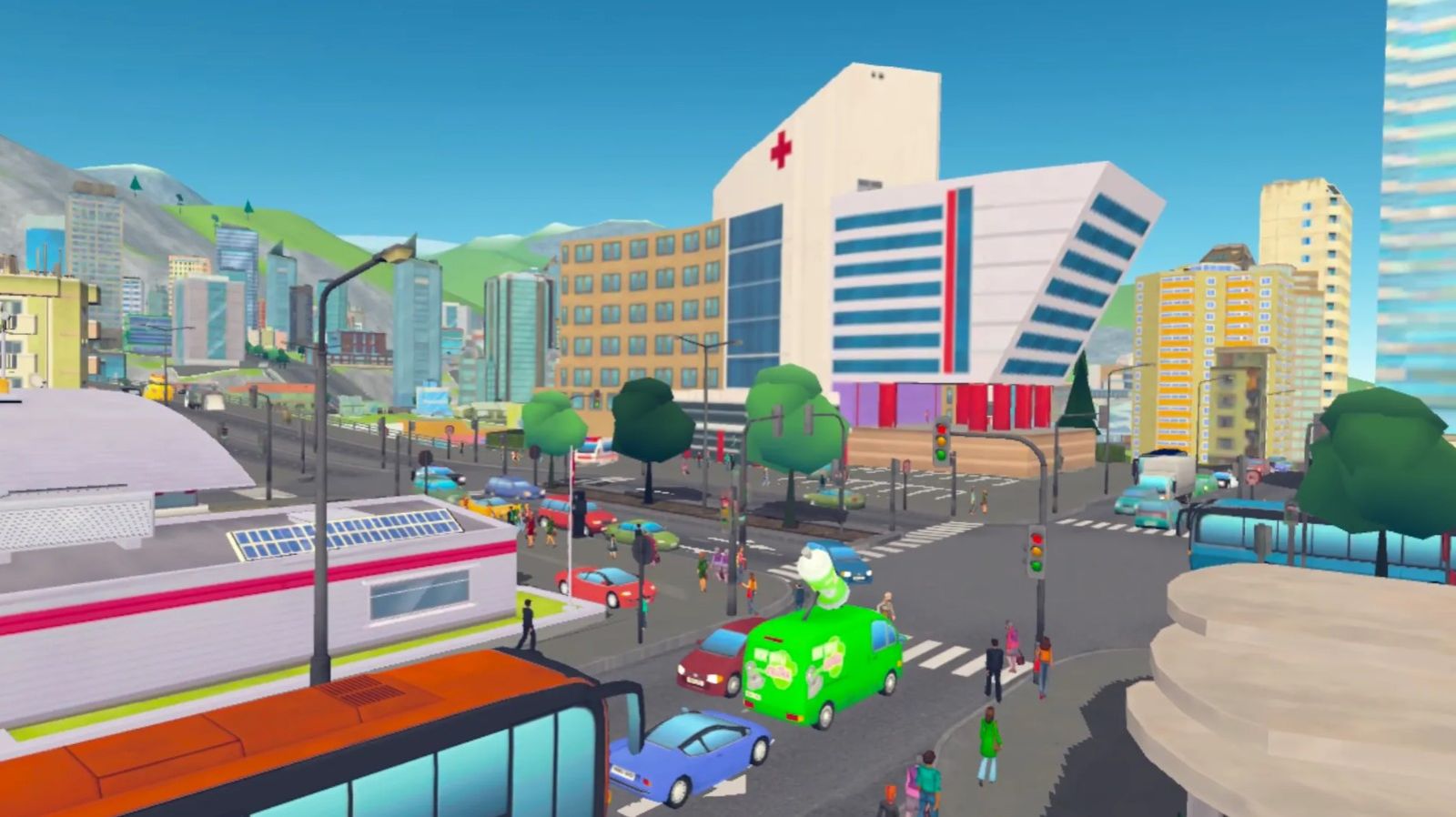 If you’ve read my VR reviews, you know that I’m unfortunately a nausea sufferer despite how many games I play. I’m happy to report that Cities: VR is a nausea-free engagement, with standing and seating options, as well as a handful of snap-based movement and vignette options to ensure you can play as long as you wish. Even zipping through a fully-baked city at high speed, I didn’t find any wobble in framerate. Despite the reductions required to pull it off, at least you won’t be made sick by the experience.

Ultimately, the only real shortcomings for Cities: VR comes from having played Cities: Skylines. It’s only through comparison that it feels less-than, and ultimately that’s a good thing. The developers managed to bring the city-building title to life in a way that scratches the itch, even if it’s merely a supplement rather than a full replacement for the full experience.

Cities: VR delivers a vignette version of the Cities: Skylines experience. The controls take a brief moment to get used to, but the hardware limitations of the Quest 2 are harder to overcome. That said, the experience is here, even if it’s in a much-slimmed and slightly blander version of the broader experience. While there are some crucial features missing, what is here is a fun slice of the core gameplay loop, and that’s impressive for a self-contained package.

Ron Burke is the Editor in Chief for Gaming Trend. Currently living in Fort Worth, Texas, Ron is an old-school gamer who enjoys CRPGs, action/adventure, platformers, music games, and has recently gotten into tabletop gaming. Ron is also a fourth degree black belt, with a Master's rank in Matsumura Seito Shōrin-ryū, Moo Duk Kwan Tang Soo Do, Universal Tang Soo Do Alliance, and International Tang Soo Do Federation. He also holds ranks in several other styles in his search to be a well-rounded fighter. Ron has been married to Gaming Trend Editor, Laura Burke, for 21 years. They have three dogs - Pazuzu (Irish Terrier), Atë, and Calliope (both Australian Kelpie/Pit Bull mixes).
Related Articles: Cities: VR, VR
Share
Tweet
Share
Submit