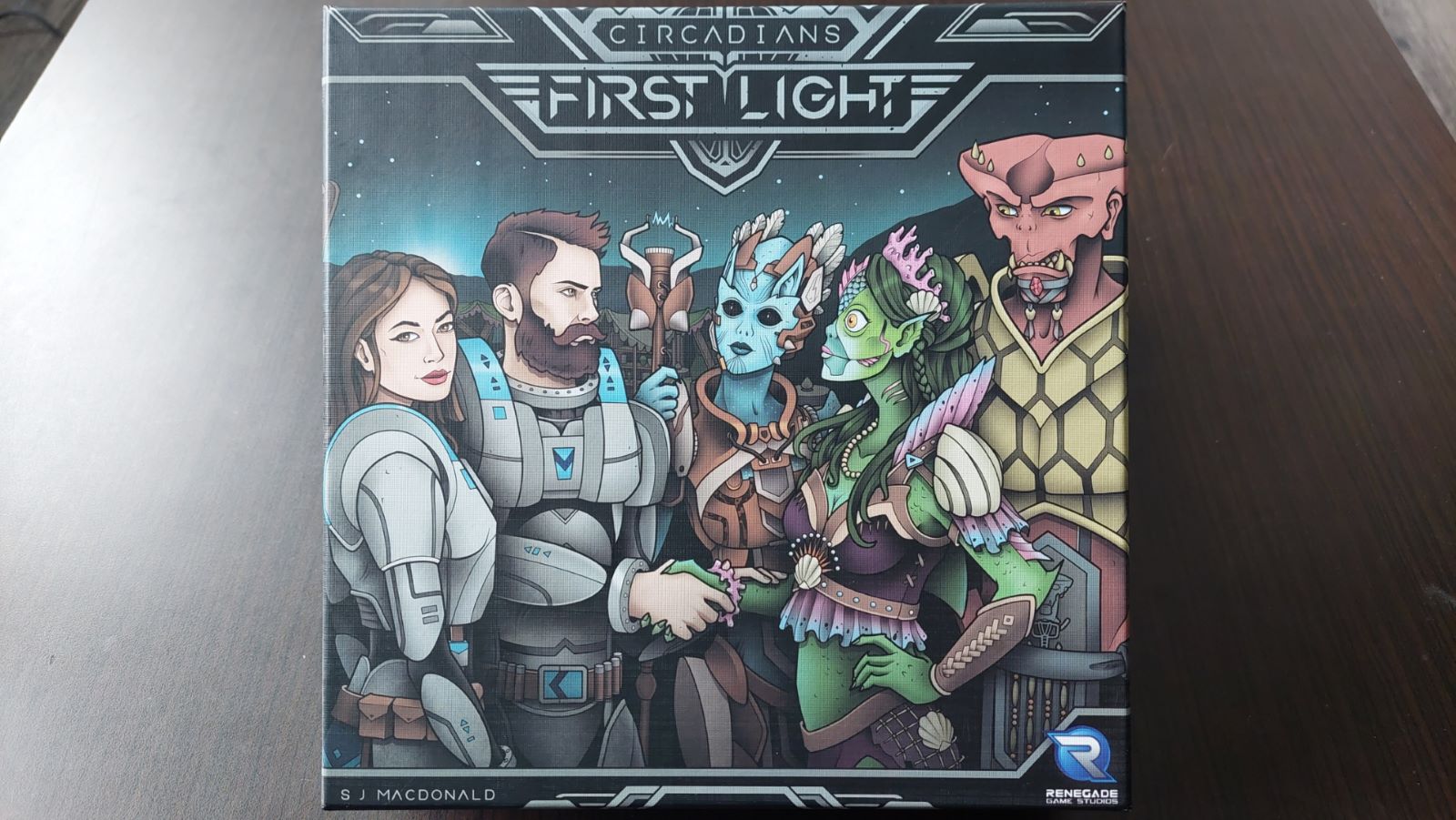 Circadians: First Light First Edition, marks S J Macdonald’s launch into the cosmos sci-fi genre with a competent competitive worker-placement crunch packed into a tiny box. 1-4 players embody colonialist astronauts competing for the prestige of who can better establish humanity on a foreign planet inhabited by alien civilizations. Yeah, we’ll come back to this later. 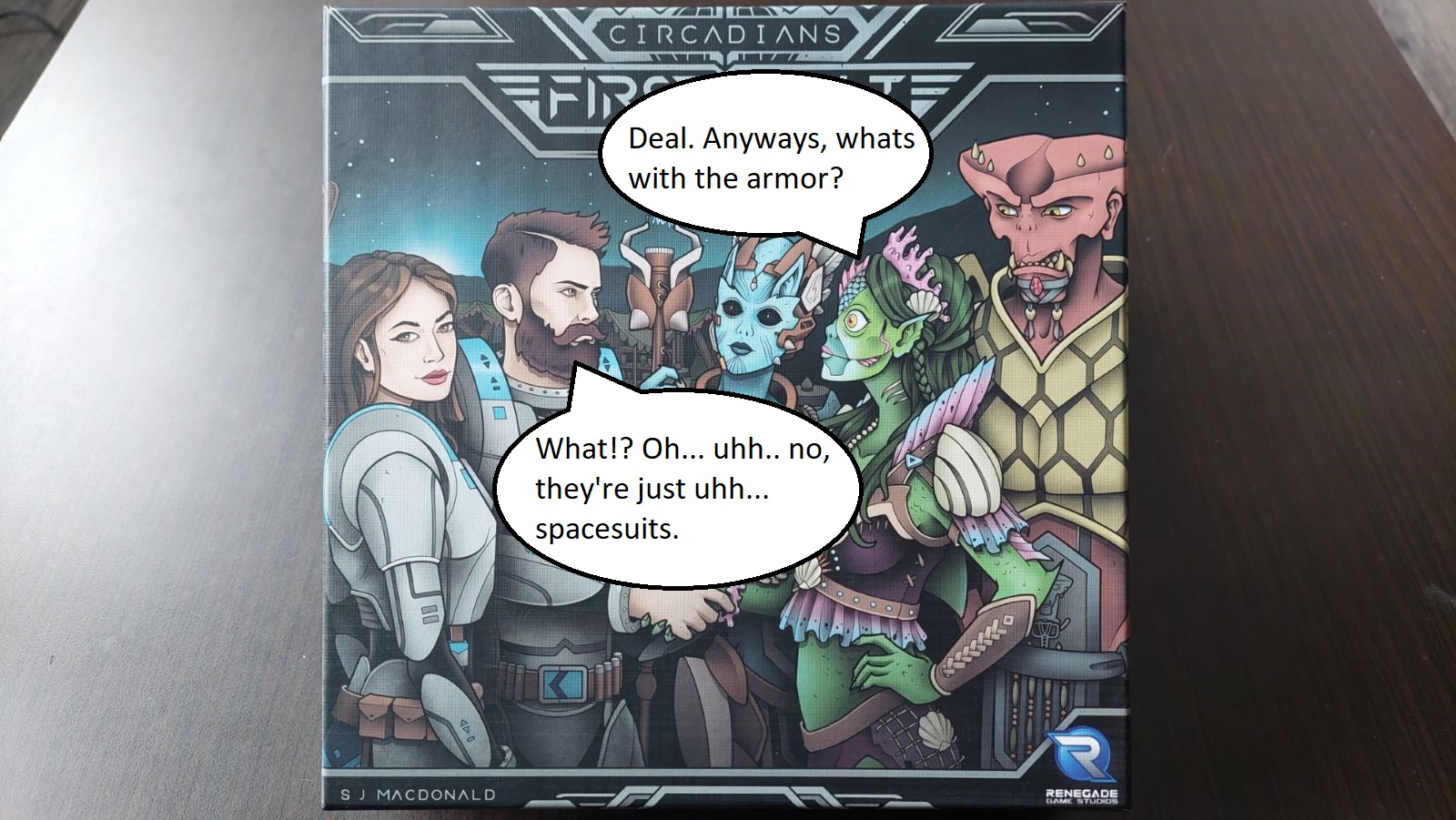 Surprisingly complex and dense, First Light does not pull punches. Players must learn to plan every turn for each round before locking in, only to see their plans dissipate into dreams as dice quickly fill the action spaces. While First Light is undeniably a challenge to overcome, not much else remains beyond the first few summits. 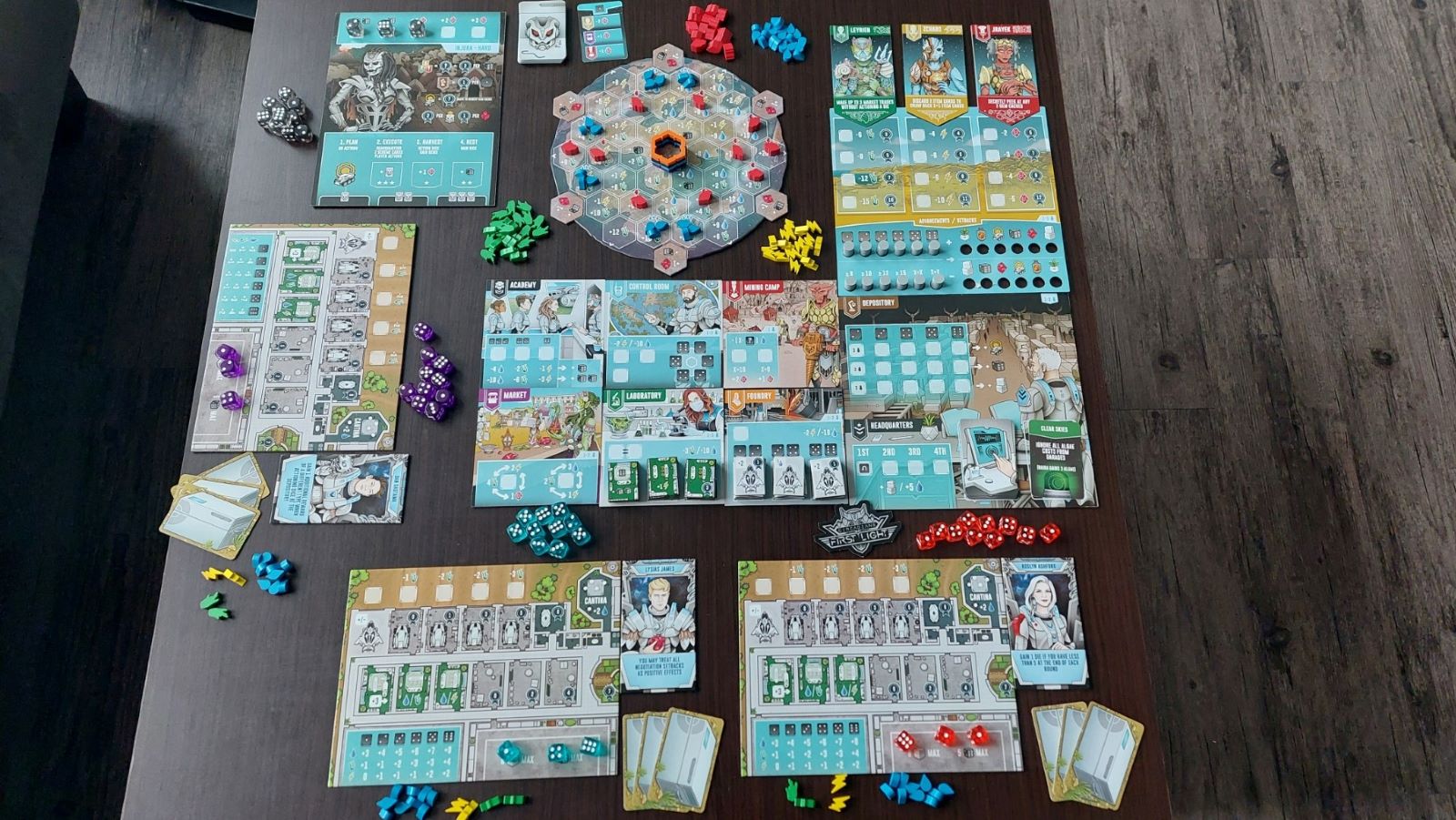 First Lights’ lengthy set up and plethora of little pieces betrays its box size. Rather than a big board, First Light separates into six location tiles, a negotiations board (NB), depository, and planet board. Not to mention the player boards, player screens, and possibly the AI board as well. Before the game begins, each player chooses a character with an asymmetric ability, and drafts three items from a starting hand of four. One issue I have regarding balance starts here, the character abilities do not seem equally strong at all.

Laying everything out, shuffling, organizing, creating the event deck, and more, make the setup a slow and tedious prelude of what’s to come. The rulebook lists 19 steps taking up almost three pages! With all four players working together, setup can take 15 to 20 minutes, maybe ten with some brisk. I’m not complaining though, I do enjoy how this small box explodes a rather large game onto the table. My smallish table has barely enough room for a two player game.

By this point, players should have a slight grasp as to what they have just gotten themselves into. If it hasn’t dawned on them yet, the explanation certainly will at about 5% of the way through. I’ll try to avoid too much detail. Played over eight rounds, First Light rotates through four phases each. 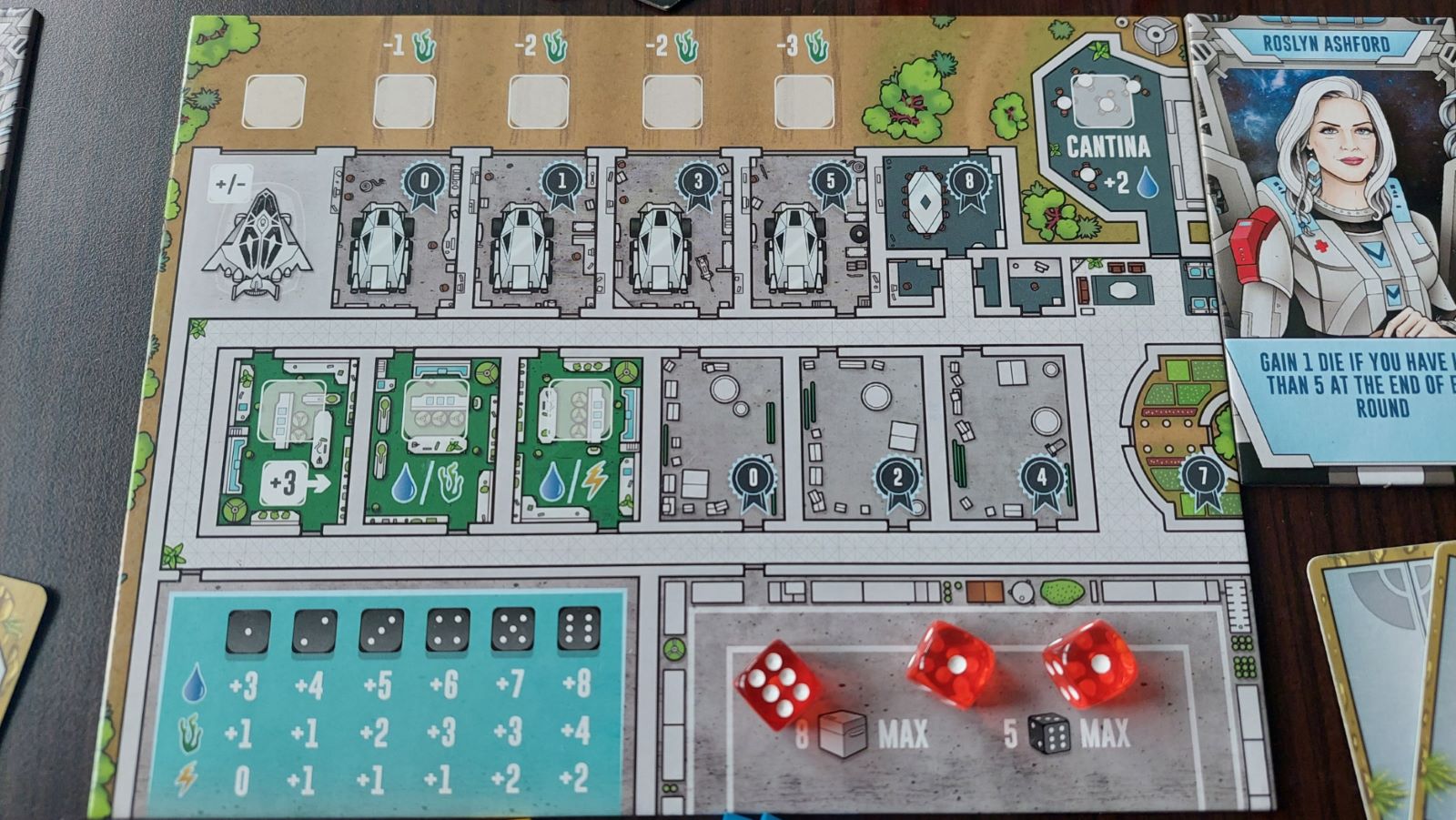 After revealing the top event card, all players roll their dice behind their player screens and secretly place them on their player board. Dice on player boards are used to either take actions or harvest resources, depending on their placement. This can be daunting for new players as learning the game one action at a time is not possible here. Players must plan all actions for that round before sealing the deal. Even more disheartening, after all that planning, players might immediately see their elaborate scheme thwarted as action spaces fill up. If you don’t want new players to be completely overwhelmed and miserable, generous mulligans are a must. For experienced players though, having a dedicated phase to scheme every turn each round adds a weighty layer of complexity. When everyone is finished planning, pull back the player screens and move on to execute. 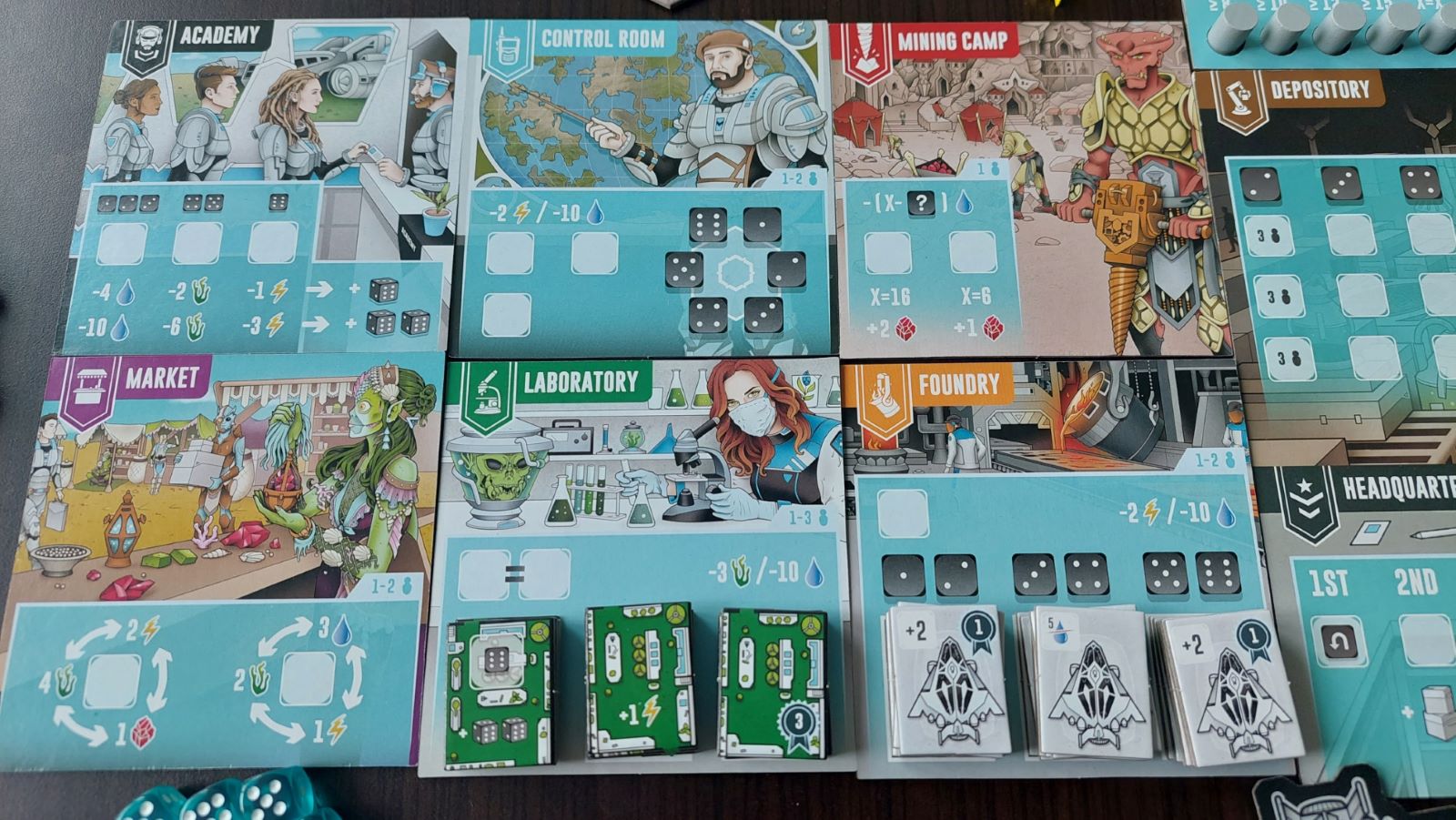 The bread and olive oil, where all the action happens. The starting player places their first die into an open slot in either of the six locations, the NB, the depository, or the headquarters. Play rotates like this until everyone runs out of dice. At the end of each round, dice placed at these locations come back to each player. The locations are used to move their harvester, exchange resources, gain resources, or gain upgrades. Generally, the number of pips on a die determines some aspect of an action. For example, a die with a value of six can make up to six trades when placed in the market. Action spaces fill up quickly, with some being both unique and crucial to various strategies, making turn order extremely important in First Light. Speaking of turn order, dice placed at the headquarters immediately give some resources and remain there until the next round where they take actions, in order of placement, before regular play begins. Competing over limited spaces creates fun moments during two player games but feels almost moot in four player games as everyone’s plans will likely get ruined anyways. 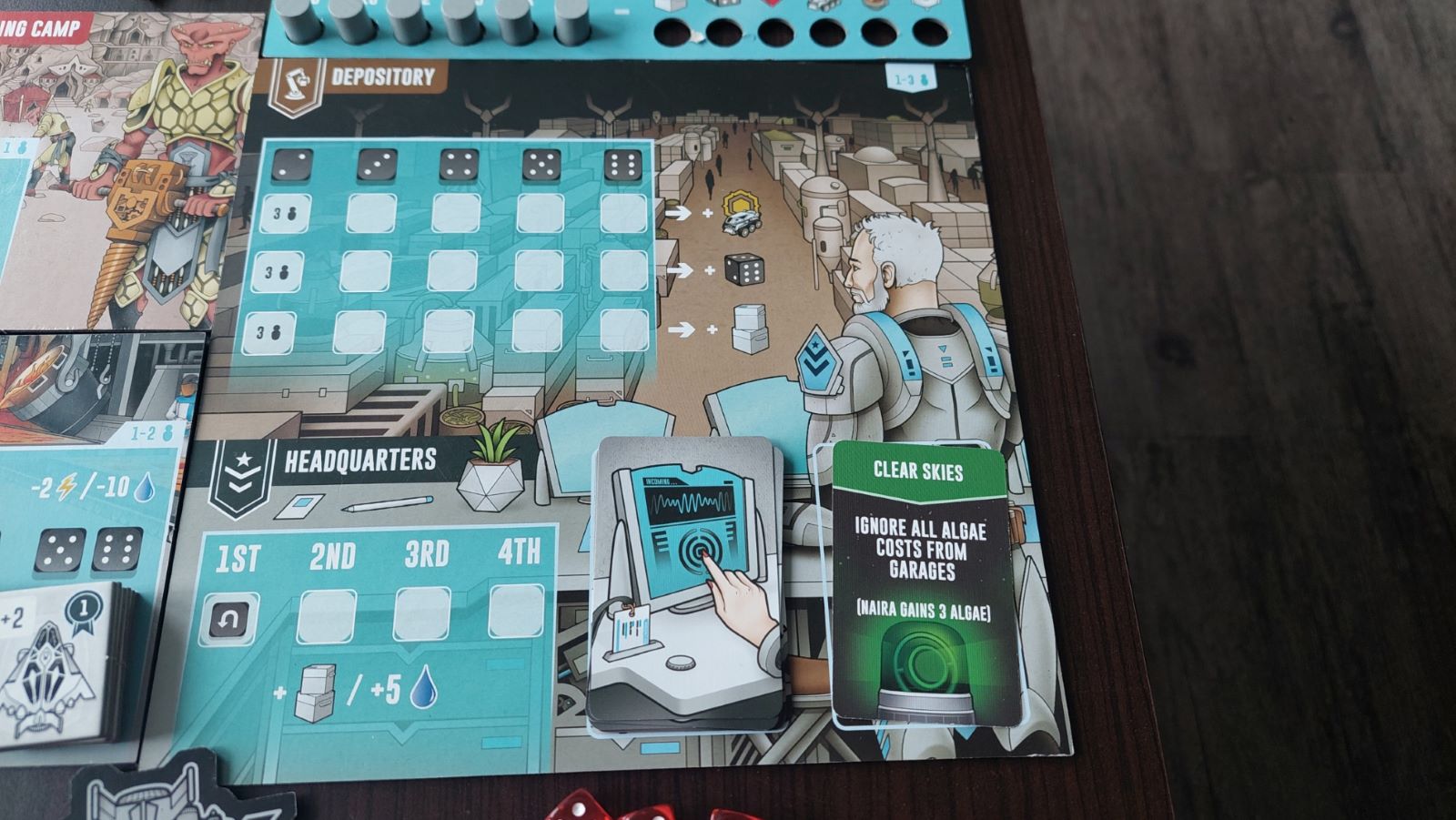 Both the NB and depository are used to score points and dice placed on either board remain for the rest of the game. Placing dice in the depository requires paying resources to build an item from hand. Based on which row a die is placed, the player also gets a bonus. Let’s talk about items real quick. There are two types of item cards and each provide victory points. Once they are built they remain in effect, for that player, for the rest of the game. Upgrades are usually cheaper, offer less points, and either decrease the cost of various actions or give bonus resources when taking actions. Score cards are items which provide no benefit but either give a lot of points or add player exclusive conditions for gaining more points, such as one point for every five water in reserve. As far as I can tell, items are the most efficient source of points. 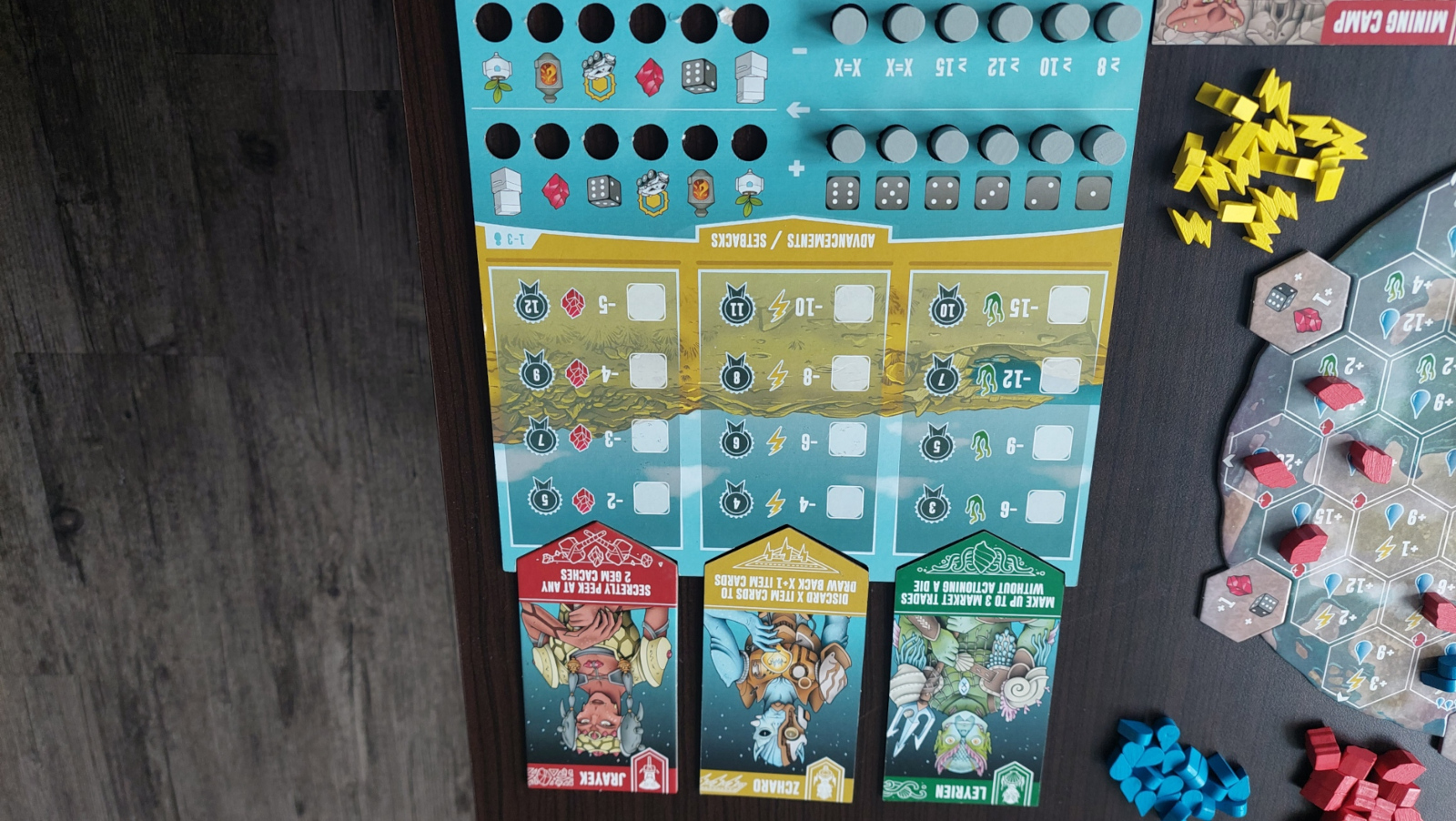 In order to place dice on the NB, players must pay the resource cost for the chosen spot. For example, a player can pay 15 algae to take the 10 victory point spot on the algae merchant column. There are three merchant columns, one each for algae, power, and gems in that order. Each column is represented by an alien faction which provides bonuses every time a die is placed in their column. Each faction has one variation to choose from at the start of the game. In addition, the first player to put a unique die value on the NB gets to choose an available reward, such as a free farm tile. Once a reward is taken no one else can choose it. There are also setbacks which have various triggers depending on the value of dice placed on the NB. Setbacks are the exact opposite of rewards and players who trigger a setback must choose one they can pay.

From my experience, the NB is great for rushing the cheapest spots and claiming an early reward or two, but building items with the depository is almost always going to give more points. The depository has no setbacks and gives a bonus every time while the six rewards on the NB can feel lackluster to even pointless, even though they run out much faster, and the same goes for the merchant bonuses. The gem merchant feels especially useless as each gem is worth one point. Spending them at the NB for almost useless rewards and a non-ideal amount of points seems absurd. This is one of my biggest issues with First Light’s balance. The big 15 point spot on the NB, costing five gems, is the last place you would ever want to put your die. Don’t fall for the big 12 because it’s actually worth seven points, the bonus is negligible, you most likely won’t get a reward, you most likely will have to take a setback, and those five gems can be used to build several powerful items instead. The odds this is anyone’s best play at any point in the game are near zero. 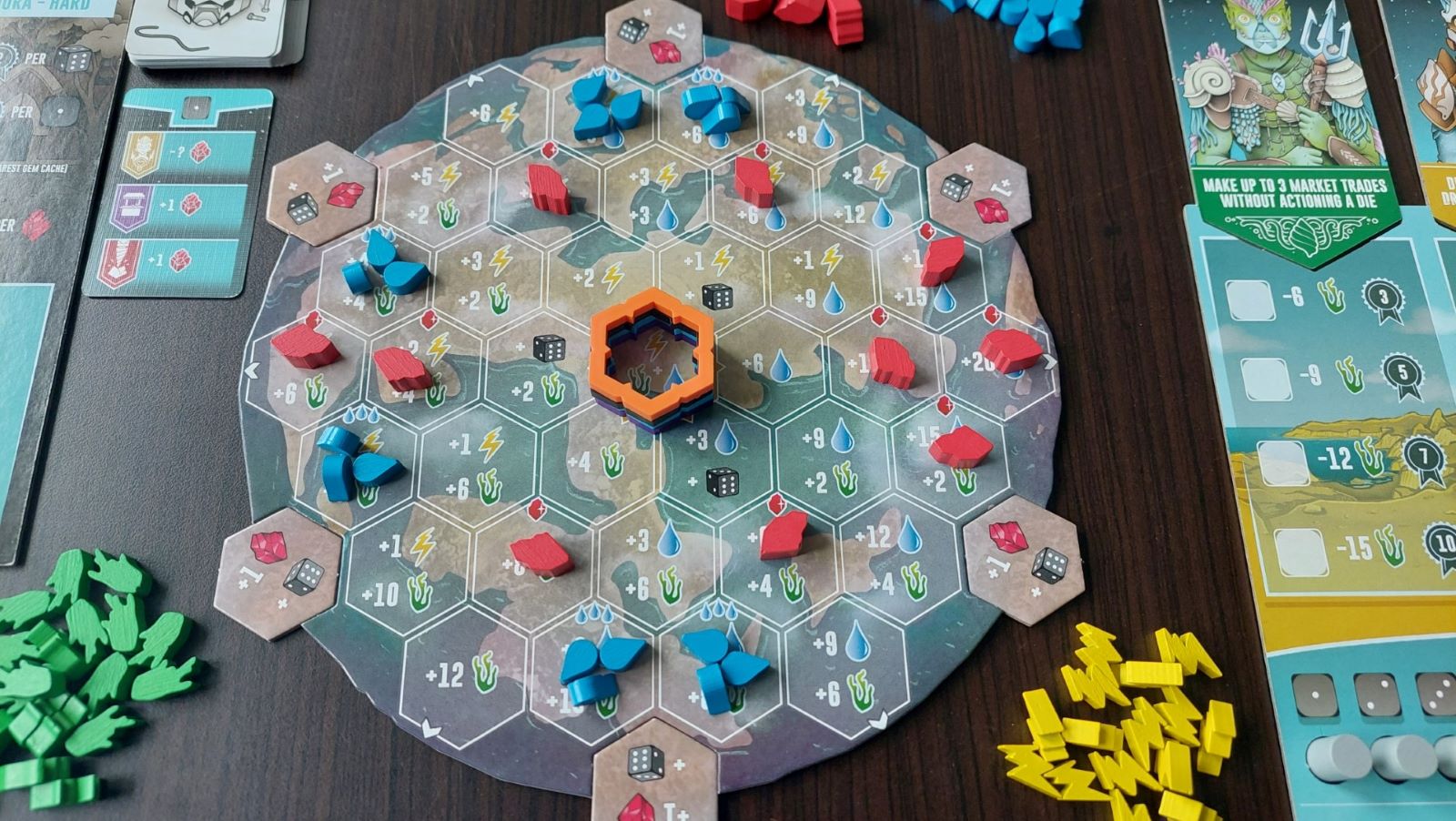 After everyone runs out of action dice, players collect resources from farm tiles and harvesters. The starting farms require a die in them to activate and produce resources depending on the value of their die. Some upgrade farms give small amounts of passive resources without needing a die. The hexagons on the planet board show a number of resources to collect if a player’s harvester is on that space. Spaces on the planet produce more resources the further away from the center they are, with the edge spaces being the largest fonts of resources in the game. Moving your harvesters to the edge of the planet board should be one of the first priorities and players who neglect this will quickly fall behind.

Easy peasy, players collect their dice from the six locations and discard down to eight items in hand and five active dice. As usual, the first player token is passed clockwise. 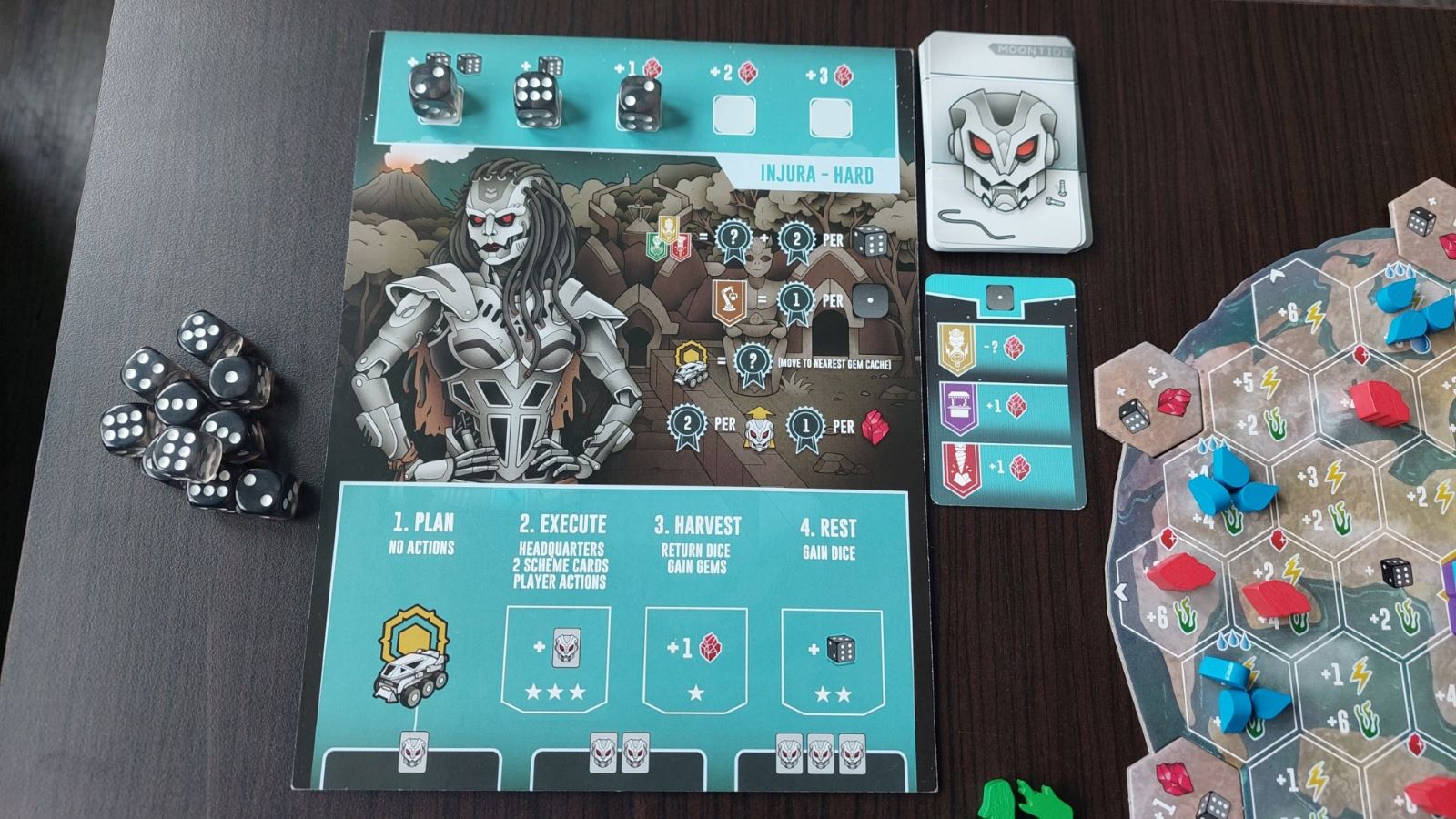 First Light shines brightest with two players, and plays alright as a solo game, partially thanks to its AI system. When an AI is used in a game, the AI will go first each round and take random actions based on the AI card flipped. In doing so it earns gems, scores points, and takes up precious action slots. First Light would be a pretty dang good two player game without the AI, but the added variety and replay value from the AI pushes First Light into excellent two player status. Any hardcore two player aficionados should give First Light a good consider.

I don’t like looking at First Light, it makes me… uncomfortable. Several depictions ceaselessly gaze at you, judge you. Careful, don’t make any wrong moves. Aside from the staring though, several other odd details can be found with a scrupulous eye. Thankfully for this review, I’m a masochist. First of all, the art and theme of this game reeks of, I can’t believe I’m saying this, militaristic colonialism. Not only do the human’s wear uniform armor, even menial objects around humans, down to pencils and pottery, obey the law of white and blue. The one exception to this is the beret, worn by the control room guy, which just so happens to be one of the most popular headpiece choices of military uniforms across the globe. But wait there’s more! The mining camp is literally a mining camp, inhabited only by the red aliens. The laboratory sports a humanoid head in a jar. The entire purpose of the planet board is to show how many resources can be harvested from the planet. 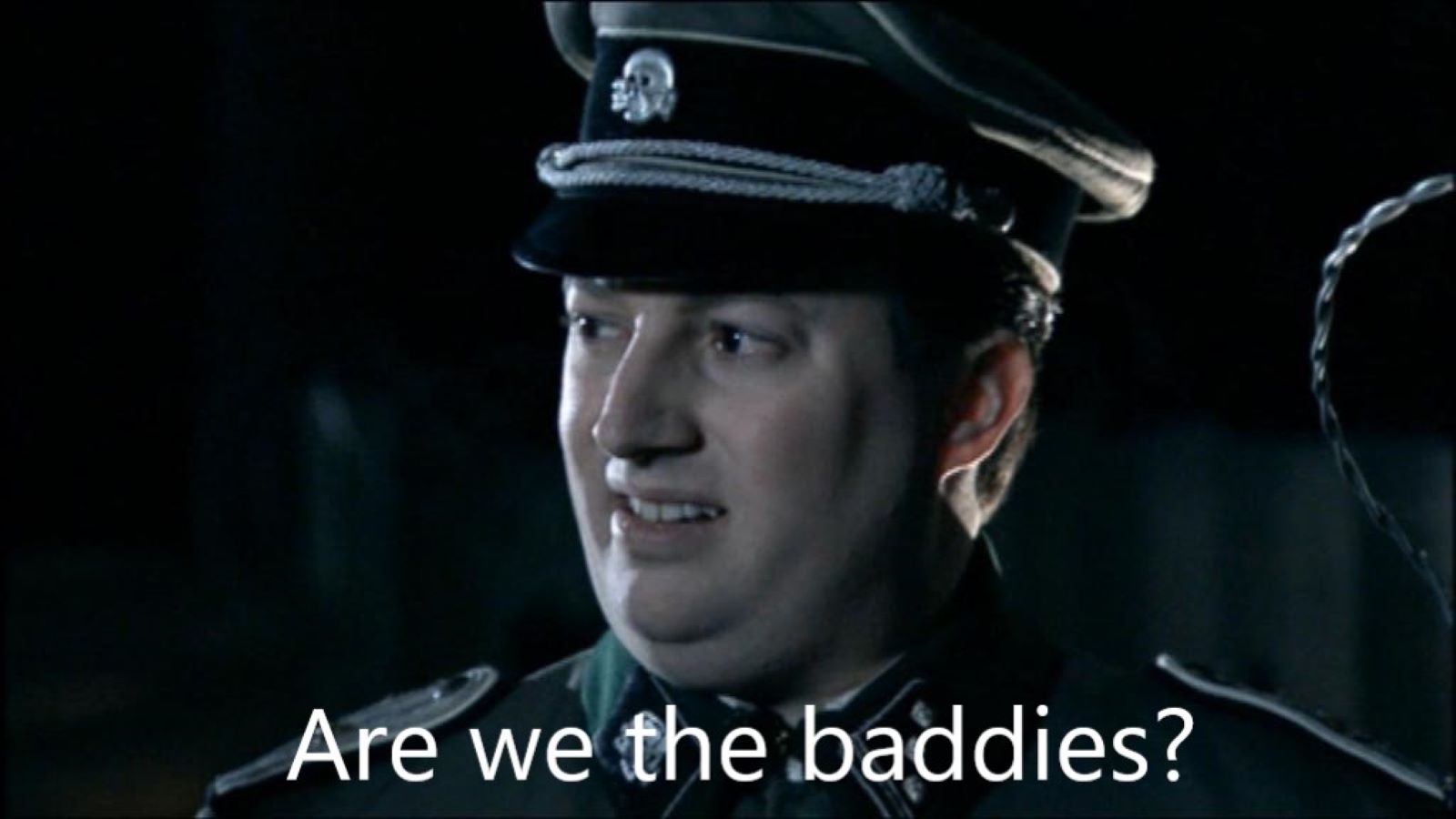 Yes. I’m still not done though. One of the hexagons on the planet board mostly depicts what appears to be water but doesn’t give any water. Stupid. Minus 50 points. Please examine the two red folk below. One is feminine presenting and has flawless skin, while the masculine presenting one has clearly been neglecting their skin care. What is this?! Reinforcing gender stereotypes?! Sexism! Misogyny! Minus 100 points. Last but not least, take another look at the cover art and focus on the handshake. Mr. Hipster Chad is totally copping a cheeky little wrist touch. He’s got the hots for the fish lady! Why does that exist?! You know what, the art is so incomprehensibly bad I’m starting to like it. Plus 145 points. 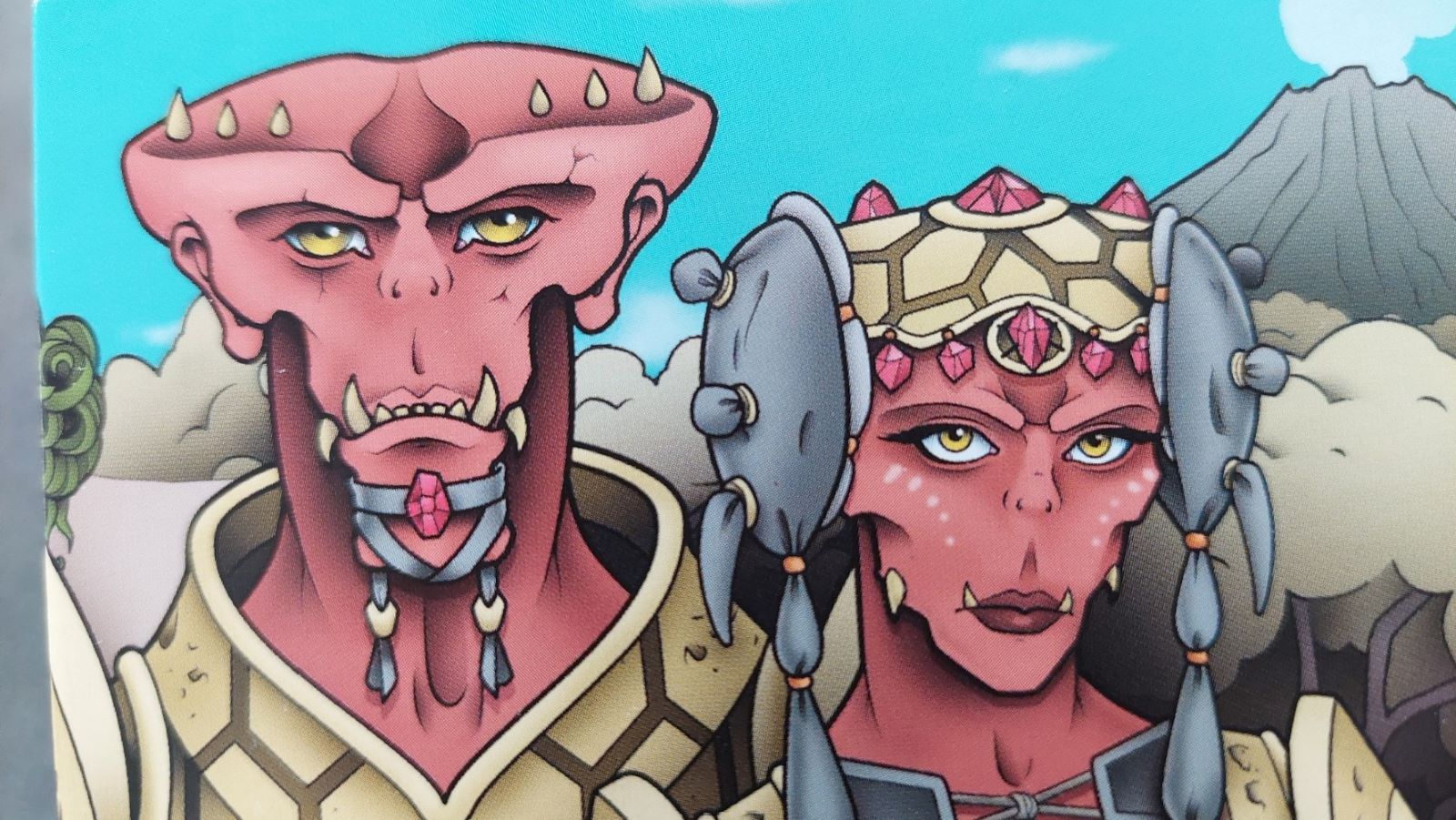 Ok, ok, back to a more serious note. The physical production of the boards and components feel solid, and I do enjoy the small resource pieces. Some strange and very deep part of my soul is satisfied to know algae is an official game resource. Finally, the box is sized perfectly. I’m straight up impressed this much game can fit in such little space.

Circadians: First Light First Edition, demands significant brain power and gives a thousand yard stare as a reward. It's desire to be hyper-competitive makes four player games frustrating and tedious, but hits the sweet spot with two players. It's a well made cake for two, yum, topped with eyeballs, and they're all looking directly at you.

Ellis is a fledgling table top hobbyist with a passion for finding and sharing novel experiences. Always on the hunt for a good laugh or competition, Ellis hopes to draw deserved attention towards any conduit of positive memories, small enough to fit on a table.
Related Articles: Circadians: First Light First Edition, Tabletop
Share
Tweet
Share
Submit